Post Time:2018-12-29 Views:
Wuwei is located in Central Gansu, at the eastern end of the Hexi Corridor, bordering Lanzhou on the east and Jinchang on the west. The city lies between the Qilian Mountain on the south and the Tengger Desert on the north. Human activities started in Wuwei area as early as some five thousand years ago.
Wuwei used to be Dayuezhi people’s ranching pastures during the Qin Dynasty. In early years of the Western Han Dynasty, the Huns defeated Dayuezhi and occupied the Hexi area where a city named Guzang was built by Xiutu, King of the Huns. In the spring of 121 B.C. Emperor Wu sent General Huo Qubing to crusade against the Huns beyond the Longyou region. With the full victory of the general, the entire Hexi Corridor was incorporated into the territory of the Western Han Dynasty. Later four administrative counties were set up in the new territory, i.e. Wuwei, Jiuquan, Zhangye and Dunhuang. The geographical feature of Wuwei’s central area is like a low-hill basin, surrounded by high mountains. The fertile land in the basin center is irrigated by the Shiyang River system, very conducive to the development of agriculture. Lush pastures could be found in the south and southwest regions, where it is good for both growing and ranching. Major salterns are found in the north. Since ancient times Wuwei has been well-known as the land for war preparations, and hence got the nick name “Silver Wuwei”. Ever Since the establishment of the four counties in the Hexi region during the Western Han Dynasty, regimes of subsequent dynasties all set up jurisdictions and administrative offices here. During the Sixteen Kingdoms Period concurrent the Eastern Jin Dynasty in Central China, regimes of Former Liang, Later Liang, Southern Liang and Northern Liang kingdoms and regime of the Daliang kingdom at the end of the Sui Dynasty all designated Wuwei their capital city. Wuwei gradually became a true metropolis west of Chang’an , a strategic juncture of Central - West communications and a major town along the Silk Road. 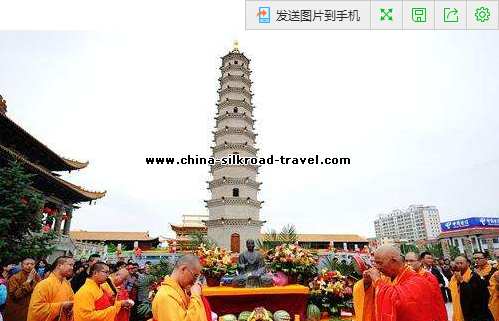 Located in the south of Wuwei city, Tiantishan (heavenly ladder mountain) Grotto, also known as Temple of Giant Buddha (Dafosi), was built by the Later Liang administration when sixteen regimes ruled in succession concurrent to the Eastern Jin Dynasty(401-439). After many generations of digging and building, the grotto caves became so impressively huge with majestic structures. Hence, some scholars named it “originator of Chinese grottoes”. The total area of wall murals inside the caves amounts to several hundred square meters. The extant caves are in three tiers with over one hundred Buddha statues. The seated statue of Tathagata Buddha in the main structure “Giant Buddha Cave” is so meticulously carved with vivid facial expressions.
During the reign of Later Liang of the Sixteen Kingdoms Period, a well-known Buddhist monk from the Western Regions Kumarajiva stayed in here for nearly eighteen years where he preached Buddhism and translated Buddhism scriptures. The Kumarajiva Monastery located in the north of present-day Wuwei was built to commemorate this great man. The Kumarajiva Pagoda inside the monastery is said to be the place where Kumarajiva’s tongue was buried.