Bingling Temple ( 炳灵寺) is one of the must-see attractions on the Silk Road 丝绸之路, located in the upstream of Liujiaxia Reservoir ( 刘家峡水库 ) and on the North Bank of the Yellow River ( 黄河 ) in Sigou Gorge, southwest of Yongjing County 永靖县, Gansu 甘肃. Along the steep red sandstone cliff, in the scenic area, you will see the air trestle road and various caves, which is entirely worth to visit.

The Artistic Style of Bingling Temple:
Western Qin 西秦, Northern Wei 北魏, Tang Dynasty 唐代, and Ming Dynasty 明代 are the most prosperous periods of Buddhism in the history of Bingling temple. Based on inheriting the folk art of the previous generation, Binglingsi Grottoes absorbed and integrated foreign Buddhist art, created vivid sculpture images, and painting art with new posture and simple technique. Its relief pagoda and Tantric fresco can be as famous as Dunhuang Mogao Grottoes 敦煌莫高窟 and Tianshui Maijishan Grottoes 天水麦积山石窟.

Must See in Bingling Temple
Bingling Temple is divided into three parts: the upper temple 上寺, the Donggou temple 洞沟, and the lower temple 下寺. They are distributed on cliffs 200 meters long and 60 meters high. There are 196 niches, 694 statues, 82 clay sculptures, and more than 900 square meters murals in Bingling Temple grottoes. The largest Maitreya 弥勒坐佛 of Tang Dynasty sits 27 meters high, and the smallest statue is 10 cm tall. Among them, there are two caves and one niche in the Western Qin Dynasty 西秦, eight caves and 25 slots in the Northern Wei Dynasty 北魏, two caves in the Northern Zhou Dynasty 北周, two caves in the Sui 隋朝, and 20 caves and 113 niches in the Tang Dynasty 唐朝.

1.Tang Shu Cave ( Cave 169 唐述窟 )
Grotto niches statues and murals of Bingling Temple are mainly composed of 169 natural Grottoes sitting on Buddha and all the small and medium-sized Grottoes on the cliff surface. Cave 169, formerly known as Tang Shu Cave 唐述窟, is 15 meters high, 8 meters deep, and 20 meters wide, and it is also the earliest and well-preserved caves in China.
In addition, there are three types of sculptures in the caves, namely, Buddhist niches, stone carvings, and clay sculptures of stone fetuses. The 171 slots are situated on the cliff of the caves, and it has a statue of the Maitreya Buddha of the Tang Dynasty, which carved by the mountains, which is quite magnificent.
2.Wenshu Bodhisattva's Inquiry About Illness 文殊菩萨问疾图
The map of " Wenshu Bodhisattva's Inquiry About Illness 文殊菩萨问疾图 " in the Western and Eastern Qin Dynasties in the Grottoes is the earliest alteration of the Uighur heuristic Sutra seen in our country at present.
3.Reclining Buddha
The clay sculpture Bingling Temple reclining Buddha is the only reclining Buddha in the Northern Wei Dynasty, which has significant research value.
"The statue of a maid in the Tang Dynasty 唐代女佣像" is the most precious one among the existing grotto statues in China, which fully reflects the style and features of the prosperous Tang Dynasty.
4.Yellow River Stone Forest ( Huanghe Stone Forest, 黄河石林 )
Huanghe Stone Forest has developed in the early Pleistocene, quaternary, Cainozoic era, about 2.1 million years ago. Due to the geological effect of earth crust movement, weathering, rain erosion, and other geological effects, store forest landform was formed with yellow gravel as the critical element and colorful shapes. 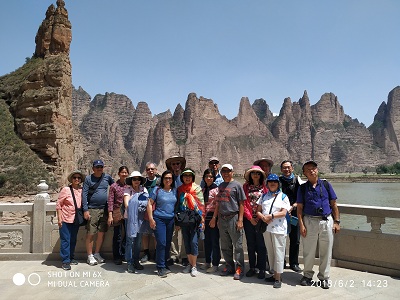 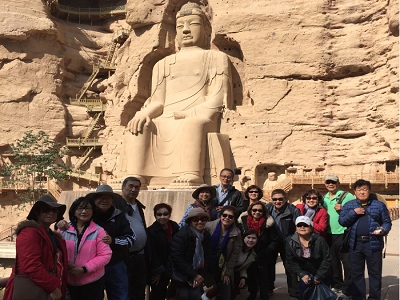 Other Scenery of Bingling Temple:
Furthermore, at the entrance of Bingling Temple, tourists can also visit the Sister Peak 姊妹峰, Yuanyang Cave 鸳鸯洞, Yaoshui Spring 药水泉 and other scenic spots, with the gorgeous landscape and dangerous peaks, which will feast your eyes.


The Historical Value of Bingling Temple:
The works of the Tang Dynasty had the highest artistic achievements, with more than 3000 monks at that time. The inscriptions on ink books of Faxian ( 法显 ), a famous monk in the first year of Jianhong in the Western Qin Dynasty (420 A.D.), are the earliest chronology preserved in the Grottoes in China. They have made a significant contribution to the chronology of other ancient Grottoes in China.

Best Time to Travel to Bingling Temple:
From June to September is the best time to visit Binglingsi Temple. In Summer, Bingling Temple is an excellent resort; tourists can enjoy not only the summer vacation but also see the magnificent natural scenery of Liujiaxia 刘家峡.