Sayram Lake, the largest and highest alpine lake in northwest China's Xinjiang Uygur Autonomous Region, acts as a mirror of the blue sky.
In the Kazakh language, Sayram means "blessing," and the lake lives up to its name by being home to many rare and endangered wild animals and plants, including five species of birds under national first-class protection and 21 those under federal second-class protection.

Featuring Attractions
Sayram Lake is a fairyland with fantastic natural scenery. It is like a brilliant emerald inlaid in the basin surrounded by Tianshan Mountain. Its water is very pure and clear. Flocks of ducks and swans coast on its surface. Flourishing cypress and cedar trees cover the whole mountain range. Cottages scatter the foothills of the mountains. In winter, the Sayram Lake is wrapped with silver which formed a magnificent view of the snowfield. In spring and summer, the prairie by the lake is full of wildflowers, and cattle and sheep were scattered over the grassland so that people can not only enjoy the scenery of Sayram Lake but also experience the unique Kazakh culture.
There are legends in Sayram Lake, such as Lake monsters, wind tunnels in the center of the lake, whirlpools, and magnetic fields on the bottom of the lake, to name just a few, which bring the mysterious and imagination of Sayram Lake. There are Ten Sceneries of Sayram Lake were summarized. "Golden silk embroider," "Keshan Pine Viewing," "Seven Colours of the clean sea," "Couple at the Heart of the Lake," "Surging Waves Embracing the Dam," "Pearls in the Green Sea," "Wusun ancient Tomb," "Fuji in the west," "Sayram Sun" and "Songshutou Misty Cascade." Sayram Lake is the best resort for future young couples for their honeymoon and vacation.
Opening Hours & Tickets Price

Historical Culture:
In Ancient Mongolian, Sayram Lake was called "western clean sea" or "Sayram Zhuoer," meaning the "lake on the mountain ridge." As Elezhuyitubomu military base (Santai) was established on the eastern bank of the lake in the Qing Dynasty, local people called the lake as Santaihaizi. There is a legendary love story about The Sayram Lake. It used to be converged by tears of a young couple committing suicide for love. Therefore it was also called "Tianchi" and "Ruhi." 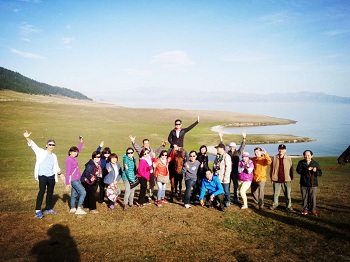 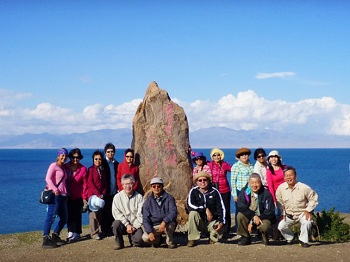 Temperature & Climate of Sayram Lake
The Region enjoys the temperate continental climate that is characterized by arid weather, long sunlight hours and great temperature variations between day and night. Its annual average temperature falls around 3.7-7.4℃ (38.7-45.3℉).
In the spring, summer, and autumn, the sapphire water of the lake seems to meet the sky in the distance. Ine pasture is a charming scene of flourishing trees, waving grass, and wildflowers that are reflected in the clear water of the lake. In the winter, snowfalls and the water of the lake turns to ice. We can enjoy a small portion of the lake in the vast whiteness of the ice and snow.
Annual Temperature of the Year/℃ ( High-Low )

Folk Customs:
Sayram Lake has been long famous for tales including lake monster, wind tunnel in the heart of the lake, eddy, and seabed magnetic field, putting a highly imaginative veil on the beautiful lake. Besides, Sayram Lake also has massive historical relics from the prairie ancestors: Rock Paintings, Wusun ancient Tombs, Temple Ruins, Ebo, epigraphy, and classical courier station ruins and so on. 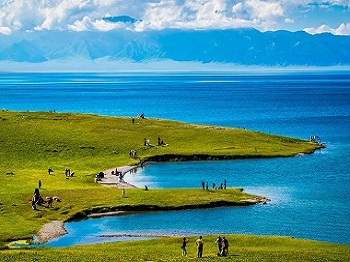 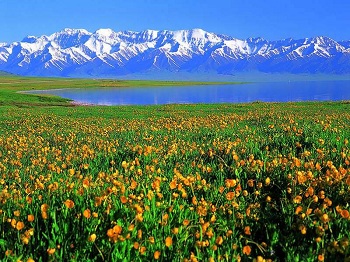 How To Go
There are 3 ways to Sayram Lake Scenic Area : Flight, Train and Driving.
1) Drive to Sayram Lake from Urumqi
Sayram Lake is located in Bortala Prefecture in the west of Xinjiang, close to Huocheng and other places in Ili. It is about 600 kilometers away from Urumqi by car. Most tourists will come here when visiting the west line of Xinjiang (i.e., Ili line). 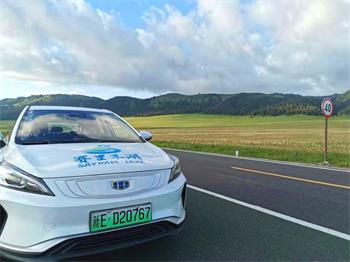 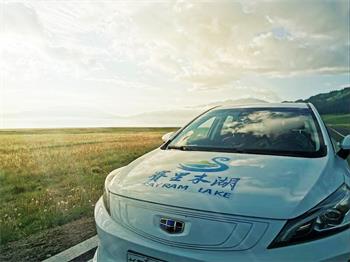 2) Go to Sayram Lake Scenic Area by air
a. Flight from Urumqi to Bole Airport ( Tianjin airlines operation ), the airfare is from 150-300usd/pp include tax.
b. Bole Airport is about 18 kilometres to the east of the city, 425 kilometres to Urumqi, and the flight time is about 1 hour.

3) Go to Sayram Lake Scenic Area by Train
Take the train from Urumqi - Jinghe ( the train fare is 62.5 - 166 CNY/pp include tax ), you can go to Jinghe railway station first, and then take a bus or taxi to the Sayram Lake National Scenic Spot. Jinghe station is about 143.7 kilometres (1hr.46mins ) away from Sayram Lake Scenic Area.
Travel strategies of Sayram Lake:
Sayram Lake has a large area and beautiful scenery. After enjoying the sunrise and the natural landscape, tourists can go to Huocheng, Yili, and other places for sightseeing. 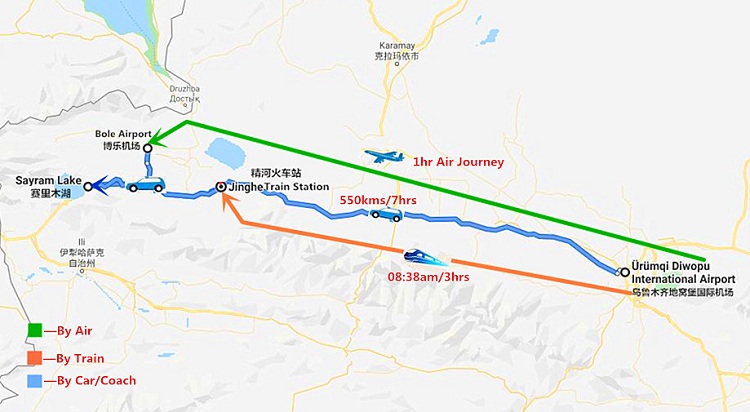 Other travel information of Sayram Lake:
When you travel around the scenic area, you can also visit some cultural relics, such as Genghis Khan General Point, Film City, etc.
Moreover, the scenic spot also provides horse riding services, so visitors can ride to the hills and overlook the whole beautiful area.