Post Time:2020-12-22 Views:
Day 9
The following morning we drove on the spectacular Karakoram highway that goes to turkey via Pakistan, Afghanistan and Iran. The road is well paved and within 30 minutes of leaving Kashgar we were climbing towards Karakul Lake, situated at an elevation of 3600 meters (about 11,000 feet). The van climbed the mountain roads effortlessly and at first reached a beautiful lake as still as a mirror with dessert sand all around and snow at the higher level. The combination is simply wonderful. We were wonder struck by the beautiful sight. The locals call the lake bundelskar meaning Dessert lake. There are a few Khargis people living around the lake in Shacks selling stones and chains they were all badly sun burned and had red freckled。 We continued till we reached the equally beautiful Karakul lake on the Karakoram  mountains. The lake has a huge mountain peak in the back ground called the Muktar Azar, which was covered in snow. There are glaziers all around and we felt HOT. It was very funny to be in the midst of snow and ice and feel hot and sun burnt. After lunch at the only Chinese restaurant there and taking a photograph of the signboard at the entrance, Jerry and I went for a long walk beside the lake and Paul and Shashi went on a horse back ride。We came back with pleasant memories of the peaceful scenery. We visited the tomb of the fragrant concubine on our return. 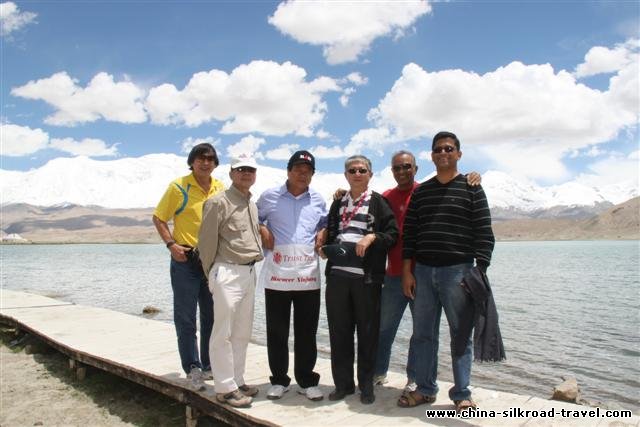 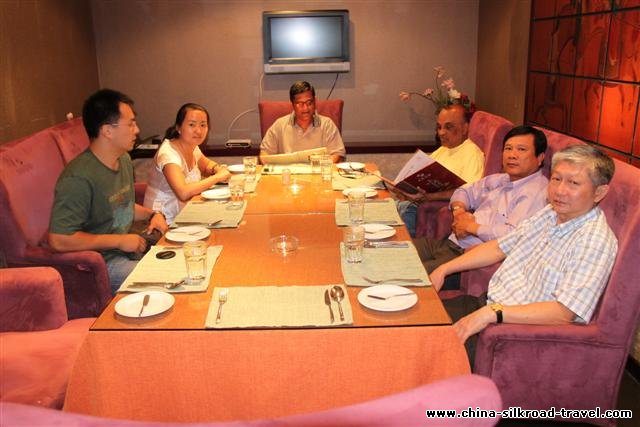 Day 10
The following day we visited the Sunday market which is the famous bazaar in Kashgar where I bought the Khargaz hat.We checked-out at noon and reached the railway station to take the Train to Urumqi. The journey was to last 27 hours and we packed bread, cake, chips and juices to last us through. We were all skeptical about the toilets and the thought of it smelling, made us doubt our decision to take the train instead of flying. At the station we were informed that the train was delayed by more than 6 hours. We took a vote and the majority opted to cancel the train ticket and fly so we came back to the hotel and got ourselves air tickets while Aysha spent 4 hours in the queue to get the refund! So we rested at last without any program and went for massages.  We were told that there was an earthquake near Wulumuchi and the trains were therefore delayed. The traffic sense in Kashgar is zero. The roads are wide and there are signals and bi cycle lanes on all roads but the people are grossly ignorant of every rule. They drive like crazy into each other and the electric two wheelers, nick named cockroaches, zip on the pavements!  Nobody keeps to any side of the road. It was exiting to watch the near misses and the 3 accidents during our brief stay while crossing the road we have to look in both directions on both sides of the road.
Day 11
The next day we got to the Kashghar airport and are awaiting our boarding call for the flight back to Wulumuchi. We reached 4 hours before the flight as there was an attempted hijacking of a plane the earlier day of a plane that was going to Wulumuchi and hence enhanced security and frisking. We reached safely checked into a 5 star hotel, mirage, and went for dinner hosted by out tour agency, at a posh Chinese restaurant called “The ancient route of tea and horses”. The ambiance was great and the food good. The tour agency, CITIC international, was very efficient.  All the reservations were done promptly and in  accordance with our requests. The tour guide, Aysha was very efficient and took good care of us going beyond her call of duty to make us comfortable. The van was comfortable and the driver good.  The tour program was well planned out and we were not pressed for time nor did we miss out on any attraction that was on our itinerary. We slept in peace with pleasant thoughts of getting back home the next day. We caught the flight from Wulumuchi to Beijing a 3.5 hour journey and then from Beijing to Singapore a 6 hour journey, with a frantic 2 hour transit in between. This was the end of a wonderful trip.