Our Tour to Xinjiang Province II

Post Time:2018-12-28 Views:
Day 3
We checked out and went to the International market, the name is a misnomer as the items sold there are only from the Xinjiang Province but sold by Turks, Kazak and Uzbek people. There were knives, swords, furs, pelts, handicrafts and dried fruits while strolling around, I noticed suddenly that my back pocket was empty. I turned round, bond style, and caught a man holding my purse red handed. I held my hand out and the guy handed it back saying something in Chinese/ yurug. Phew, it was a close call. That was the most exiting thing about the international market. From Urumqi we drove east to the oasis city of Turpan, on the way we had lunch at a family grape garden restaurant and the food was good.We drove through the dessert for the first time and it was awesome. Sand, sand and red sand mountains. Now this place,

Turpan is HOT, it is in a valley with red sand mountains all around. The elevation surprisingly is 135 a below sea level, though the sea is two thousand miles away.  There is a Murtuk river that flows down the Himalayas though Turpan and that is why the caravan route passed through this city.  The drive was only 2.5 hours and 180 kms, from Urumqi but the climate was entirely different.  The temp was 43C when we reached at 4:00 pm. The mountains around Turpan are called the 'flaming mountains' as it is unbelievably red in color and the climate is also hot giving an impression that there is a ring of fire around the city. We visited the Emin minaret which appears to be a Buddhist temple converted to a mosque, build 250 years back.It was more like the Gompas in Shillong (India).  From here on every time we crossed a red colored mountain range, Jerry would ask Aysha if it was the flaming mountains and after a while, that is a few hundred kilometers and 20 questions later, she was frustrated and said that it is not the 'flaming mountains' but the 'heavenly mountains'. Jerry kept asking anyway. The hotel we checked into was the finest in China!

We then went to see the ancient ruins of JiaoHe city. About 3800 years ago on an island on the river Murtuk, there was a settlement of humans in caves dug out of the flaming mountains. The island is made of soft sand stone and is a mile long and half a mile wide. Quiet small and we could walk the length and breath in an hour and a half. As the river flowed around  the island the land was cultivated and the civilization prospered for the next 3600 years with better clay buildings being built and with the advent of Buddhists, Gompas were built with clay and wood and then the Islamist came 200 years back and killed every body and the entire city was left in ruins. These ruins are a world heritage structure and being in an oasis with the flaming mountains around the site is a must see.We then had a foot massage at a local parlor which gave us all sprains from which it took two days to recover! A no no to Chinese foot massage please! (We had a good massage in Kashgar) We had dinner at a local yurug place and after our fruit party in room 503, we slept like logs.

Day 4
The next day we drove into the dessert and past huge red mountains and canyons to reach the Buddha gretto at Bezilik. There is a river that flows into the dessert and this has created deep canyons 20 stories high. All around there are only sand mountains and in the ravine there is water and greenery of course only 10 feet on either side of the water way. The river itself is 5 feet wide and flows from the north to south and the caravan route goes from east to west, traversing the water ways.  On the side of these cliffs, the Buddhist monks dug out caves and painted stories of the Buddha and installed statues too. The Muslims raided the caves and disfigured all the faces. In 1906, a German explorer removed the remaining paintings and took them to Germany. Now only the empty caves are there with a few disfigured paintings on the roof and walls done with vegetable colors and depicting stories from the Jataka tales. 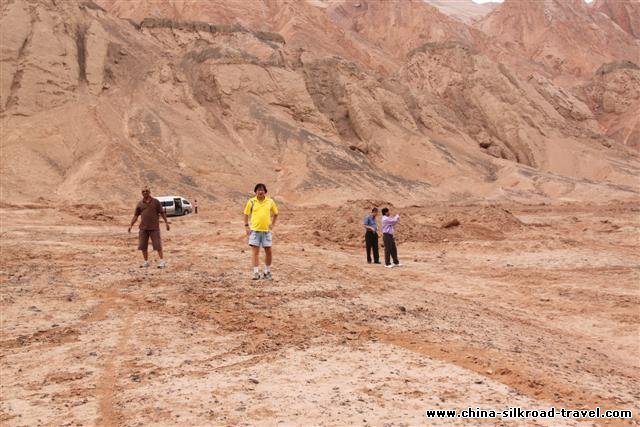 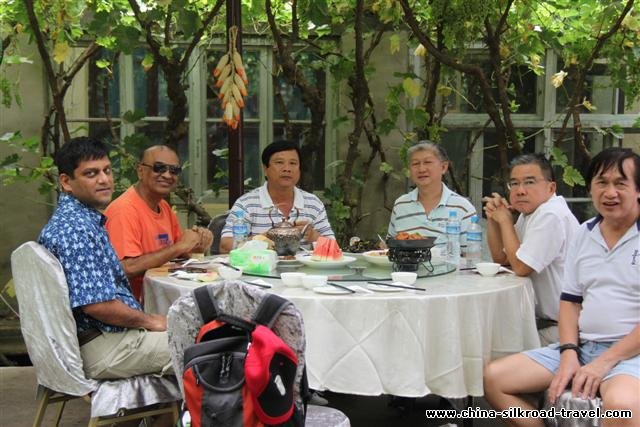 From the caves, we drove to the under water irrigation system used in Turpan called the Karez. As the water from the melting snow evaporated in the dessert, the people, about 2000 years back, dug out an under ground drainage system to get the water from the mountains to the city. The tunnel is about 18 feet under the surface of the ground and three feet in diameter and runs for 50 to 60 and sometimes 100 kms. These karezs make an oasis in the dessert. We visited one of the 375 karezes in XInjiang that is near Turpan.  We left Turpan and drove to another city in the dessert, called Korla. The drive was a good three and a half hours over 350 kms through hot and arid dessert lands. The scenery was spectacular with the heavenly mountains of sand stone and black stones in between.  The peacock river runs through korla which is fairly large city  that has tall buildings and a lot of industries. It is surprising to find such a city in the dessert, connected only with this one road. The people are mostly Mongols here. We checked  the hotel which was as good as the one in Turpan.We went out for a walk for fruits and had our fruit party in Jerry's room using Paul's pen knife to slice the  melon