Post Time:2020-01-28 Views:
During the Han the Sui and the Tang dynasties, Buddhism from India, Zoroastrianism and Manichaeism from Persia, Nestorianism from East Rome, Islamism from Arabia were gradually introduced to China, producing a significant impact on the development of China’s politics, ideology, culture, art and science.

Buddhism
Born in ancient India in the 4th century B.C., the Buddhism began to spread abroad and became a world-wide religion around the 3rd century B.C. About the 2nd century B.C., Buddhism entered China’s Xinjiang region along the ancient Silk Road that ran through the Asian continent. The religion then passed the Yumenguan Pass and Hexi Corridor and gradually penetrated into the inland areas and spread over the whole country eventually. Some of the earliest Buddhist monks who traveled along the ancient Silk Road included An Shigao - Prince of the Anxi Kingdom, Buddhacinga(Futucheng) and Kumarajiva - monks from the Qiuci Kingdom. With the eastward dissemination of Buddhism, various forms of arts such as grottoes, sculptures, mural paintings and others also entered China. After their integration with traditional Chinese arts, a large number of Buddhist sculptures and mural paintings such as those found in Grottoes at Yungang, Longmen and Dunhuang, Maijishan and Xinjiang were created, leaving behind a rich and precious pool of artistic treasures. 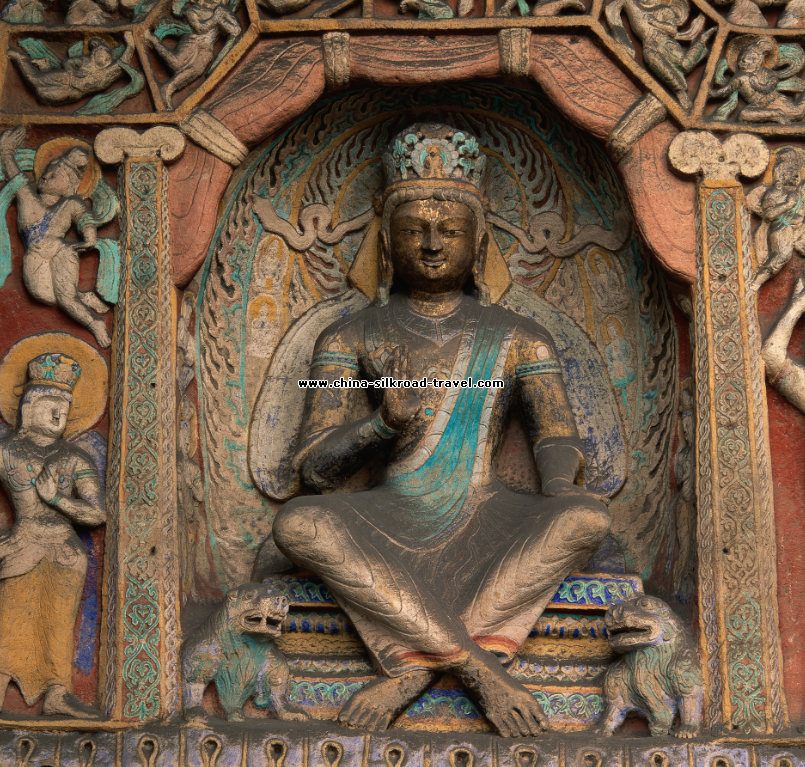 Zoroastrianism
Zoroastrianism was a popular religion in ancient Persia (present - day Iran) and Central Asia. In Chinese history this religion was known in different names such as Fire-worship. During mid 3rd century, Zoroastrianism entered China via the Silk Road and reached its peak in the Tang Dynasty.

Manichaeism
Manichaeism was a popular religion in Persia and entered the Tang Dynasty from Persia in the first year of the Yanzai Period (694) during the reign of Empress Wu Zetian. This religion advocated for frugality, mutual aid, vegetarian food, alcohol free, simple burial practice, thus easy for farmers to accept. Manichaeism monasteries built all over the country were known as “Great Cloud Bright Temple”. The Song Dynasty peasant uprising led by Fang La used Manichaeism slogans as their advocacy messages.
Nestorianism
As a sub-branch of Christianity, Nestorianism was introduced to China during the Tang Dynasty. On the 9th year of the Zhenguan Period (635), a Nestorian pope named Alopen brought Nestorian teachings to China. Emperor Taizong Li Shimin ordered a monastery be built in Chang’an city where Alopen was permitted to preach. During the Jianzhong Period of Emperor Dezong(780-783), a “Tablet for Roman Nestorianism in China” was built to record Nestorian’s dissemination and expansion in China.

Islamism
Founded by an Arab named Muhammad in 622, Islamism was first introduced to China during the Tang Dynasty when a large number of Muslim merchants from West Asia came to China to conduct trade. In the 10th century, Satuk Bugera Khan, King of the Karahan Empire centered around Kashi and Atushi, converted to Islamism. In early 11th century, Karahan army conquered the Khotan Kingdom and converted the local religion to Islamism. By 13th century, along with large-scale expedition of the Mongol armed forces, a large number of westerners moved to China. Persians and Arabs who believed in Islamism and Turkish-speaking ethnic groups lived together and gradually formed a unique Chinese Muslim community.