Home > China Tours > Silk Road Group Tours >
Summary: Silk Road is one of the popular route which is famous for the culture,history,moreover,Xinjiang is not only worth to visit for its kinds of historical sites, but also the authentic folklore which attracting more and more tourists to this mysterious land.This Silk Road Highlights Tour include Dunhuang, Turpan,Kashgar and Taxkorgan county which is the only distric for the Tajik People.Take the Dunhuang Tour and Xinjiang Travel with us. enjoy the colorful culture of Silk Road.Our first group departure on 1st May. 2pax has confirmed the tour with us. Come and Join Us, Excellent Service Promised!

Meet and then transfer to your hotel for rest.Tomorrow will start your great Silk Road highlights tour with visiting Dunhuang. Our Thailand Group in Mogao Caves

After breakfast visit Mogao Caves, Echoing-Sand Mountain and Crescent Lake.After dinner take the night train to Turpan, the famous for the grapes, hot weather and historical sites.
Mogao Grottoes:The traveler finds the Mogao Caves, a shrine of Buddhist art treasures, 25 km (15.5miles) from downtown Dunhuang on the eastern slope of Mingsha Shan (Mount Echoing Sand). A network of plank reinforced roads plying north to south 1600 meters (5, 249 feet) long lead to the cave openings, which are stacked five stories high some reaching up to 50 meters (164 feet). By the way, Mogao means high up in the desert.According to Tang Dynasty records, a monk had witnessed onside a vision of thousand Buddhas under showers of golden rays. Thus inspired, he started the caves construction work that spanned ten dynasties.
Echoing-Sand Mountain and Crescent Lake:Located 5 km (about three miles) south of Dunhuang City, the Echoing-Sand Mountain, for many Chinese well known as Mingsha Mountain, is celebrated for the sound of the moving sand. In 1994 it was acclaimed as the national key scenic spot. Together with the Crescent Springand the Mogao Caves, the Echoing-Sand Mountain is most popular sitein Dunhuang travel.You may wonder why the sand makes these different sounds. There is a legend that says how, in ancient times, a general with many soldiers came here to fight in a war with their enemies. 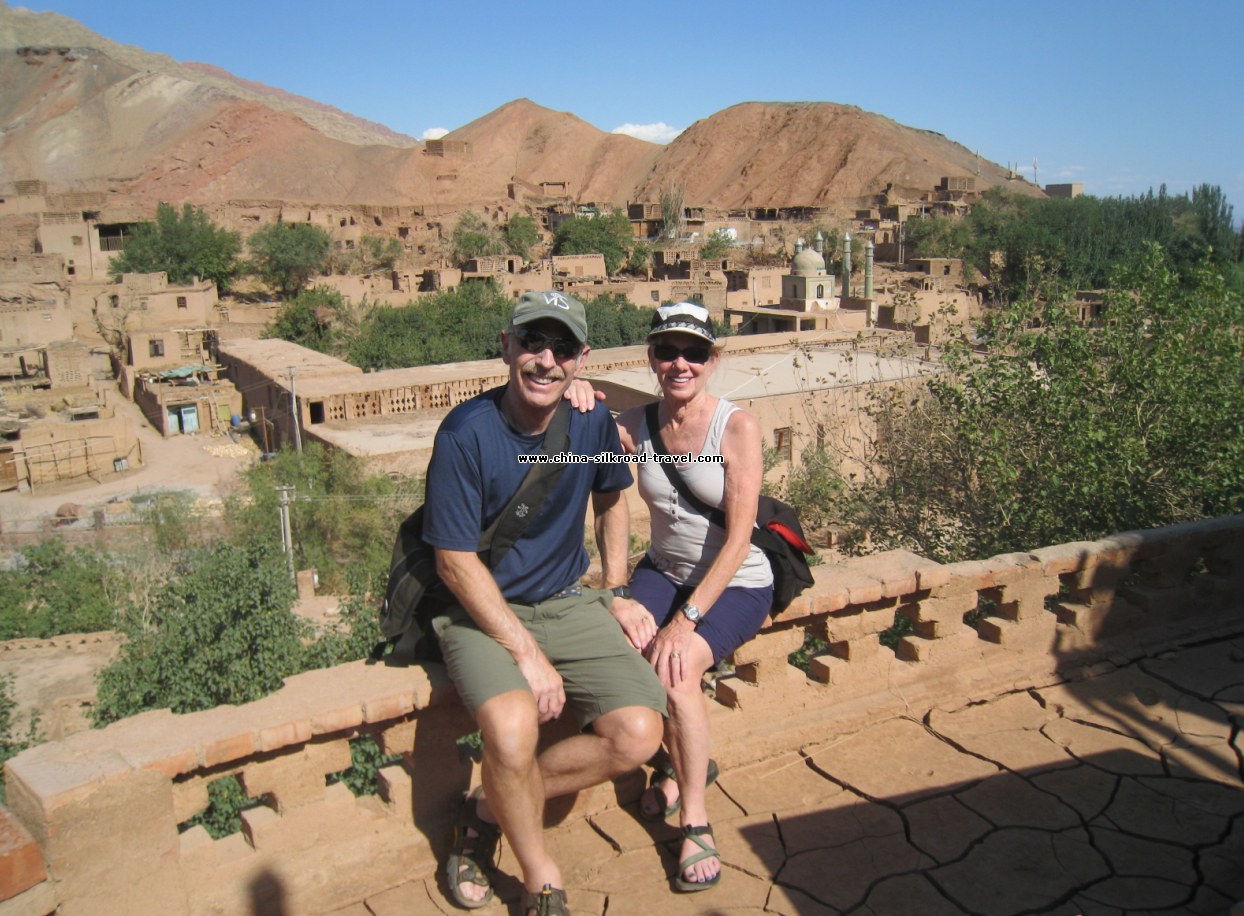 Barry and Fran are in Tuyoq Valley

Upon arrival in the train station, we will drive about 40mins to the Turpan town, after breakfast visit Bezklik Grottoes, Astana Tombs, Tuyoq Valley and Flaming Mountain.
Bezklike Grottoes. “Beaklike”means “a place with beautiful decoration”. These caves are first excavated in Qu`s Gaochang period. The excising caves were reconstructed by Uighur people.
Astana Tombs are the graveyard of the residents lived in the Gaochang City in the Jin-Tang times. Between 1959 and 1975, a great number of cultural relics have been unearthed, including Chinese documents, textiles, epitaphs, coins, clay sculptures, pottery, wooden wares, silk-paintings, crops and foods ,etc., Known as “the Underground Museum.
Tuyoq Valley,constructed in eastern and western cliffs in Tuyoq valley . more than 40 caves, there are 10 preserving murals. They are considered to be the earliest caves in Turpan, Murals are mostly damaged, but unique in style. 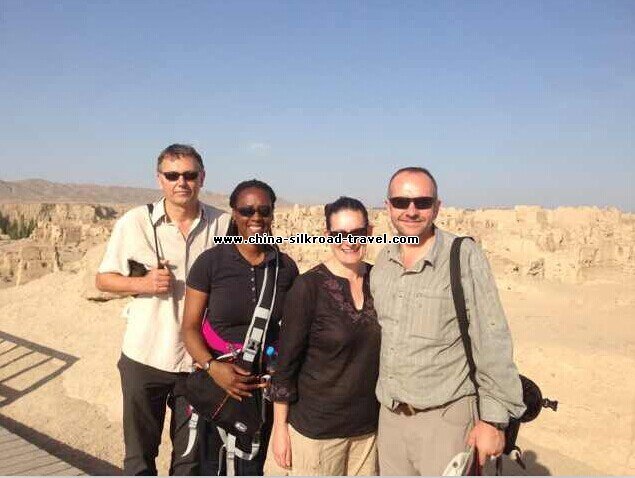 Jiaohe Ruins is located on a mesa in willow leaf shape between the Yarnaz River valleys 10 kilometers to the west of Turpan City. running from northwest to southeast, 1760 meters long and 300 meters across at the widest part. The city includes city gates, streets and lanes, government office, temples, domestic houses, cave houses, wells, and an underground temple.
Karez Irrigation System,The Karez System is a unique irrigation system in Turpan, which, taking advantage of the slopes, draws the underground water to flow by itself to irrigate farmland. It consists of four parts: vertical wells, underground channels, ground canals and small reservoirs
Sugong Minaret was built in the 41st year of the Qianlong period of the Qing Dynasty,It is an embodiment of the ancient architectural arts of the Uygur nationality. The tower is 37 meters high and 10 meters in diameter at the base. The body of the tower is cylindroid in shape, built with bricks arranged in various symmetrical patterns.

Heavenly Lake (Overnight in the Yurt of local Kazaks)

After enjoying the buffet in the hotel, first you will visit the Xinjiang Regional Museum where over 50,000 items in the collection about the Niya Ruins, Loulan Ruins. Then we will drive about 1.5hrs (120kms) to Heavenly Lake to experience the life style of local Kazaks in the deep of Tianshan Mountain. tonight we will overnight in the Yurts by the Lake.
Meals: Breakfast
Accommodation: Kazaks Yurt by the lake 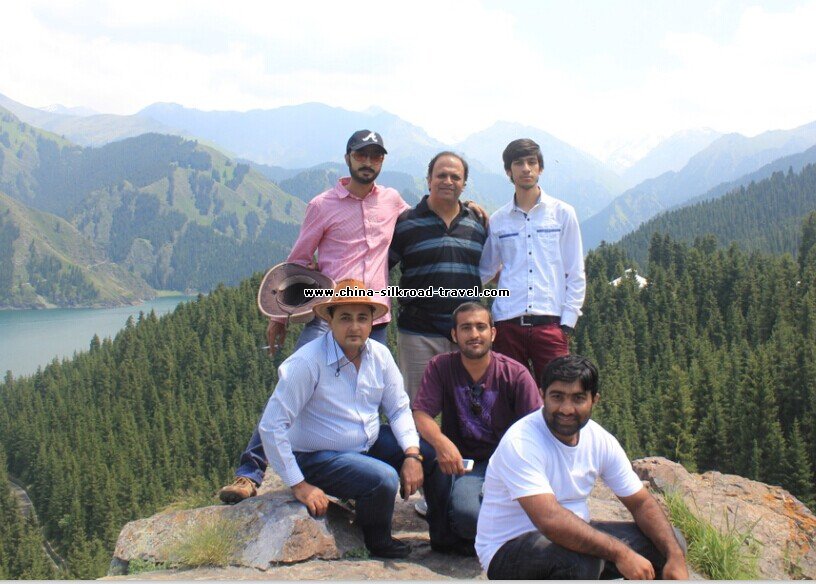 Pakistan Group in the site of Heavenly Lake

Xinjiang Regional Museum is the main institution to collect and investigate the unearthed cultural relics and specimens in Xinjiang. There are more than 50 thousand pieces of various kinds of cultural relics stored in the museum, among them, the ancient mummies represented by ‘the Loulan Beauty', manuscripts in Chinese, Kharosthi, Qiuci, Yanji, Tibetan, Uigurian and other characters prevailed in ancient Western Regions, the silk ,wool, cotton and hemp fabrics and folk retainment, etc., are unusual tidbits in the world.
The Heavenly Lake is an alpine drift lake shaped in the Quaternary Glacie period，and was listed by the State as one of the key scenic spots in 1982 Besides，it is an AAAA Grade scenic spots. Generally，there are eight famous attraction spots，a few cultural relics and eye catching mountains standing in the Heaven Lake. In winter the beautiful lake is an ideal ski rink.
.

In the morning enjoy the great landscape of the Tianshan Mountain and then be transferred to the airport and take the flight to Kashgar,An old, imaginary and beautiful land is located in the west of China. It is a place which is full of features of Western Regions, and it is an extensive land that has unique charms in nature and humanity.There are unique historic sites, unsophisticated ethnic folklore, beautiful natural scenery and a great deal of humanistic features.
Meals: Breakfast
Accommodation: In Kashgar Tianyuan International Hotel (4star) 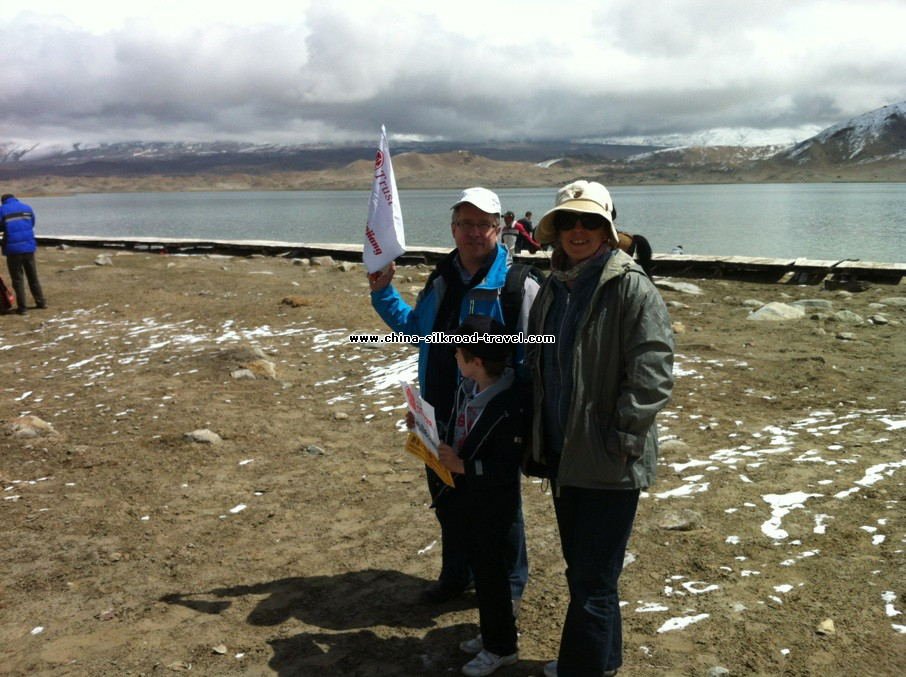 Karakorum highway It is 1200 kilometers almost Sino Pakistan—Chinese friendship high way build since 1976. Ancient Silk Road Merchants often run Via over Karakorum, Wahan corridor with Hindi Kush Mountain to India, Pakistan until Iran. On the road, enjoy the scenery of the Mt. Muztag, Taxkorgan, Persian language that means, stone castle.
Karakul Lake At an altitude of 3,600 m. it is the highest lake of the Pamir plateau, near the junction of the Pamir, Tianshan and Kunlun Mountain ranges. Surrounded by mountains which remain snow-covered throughout the year, the three highest peaks visible from the lake are the Muztag Ata (7546m), Kongur Tagh (7,649m) and Kongur Tiube (7,530 m). The lake is popular among travelers for its beautiful scenery and the clarity of its reflection in the water, whose color ranges from a dark green to azure and light blue. There are two Kirgiz settlements along the shore of Karakul Lake, a number of yurts about 1km east of the bus drop-off point and a village with stone houses located on the western shores.

After the breakfast in the yurt, take some walking around the Karakul lak and enjoy the great view of Muztag Peak afar, what a peaceful world. Then drive about 1.5hrs (100kms)  to Taxkorgan County.
Meals: Breakfast
Accommodation: In Crown Hotel (4star) 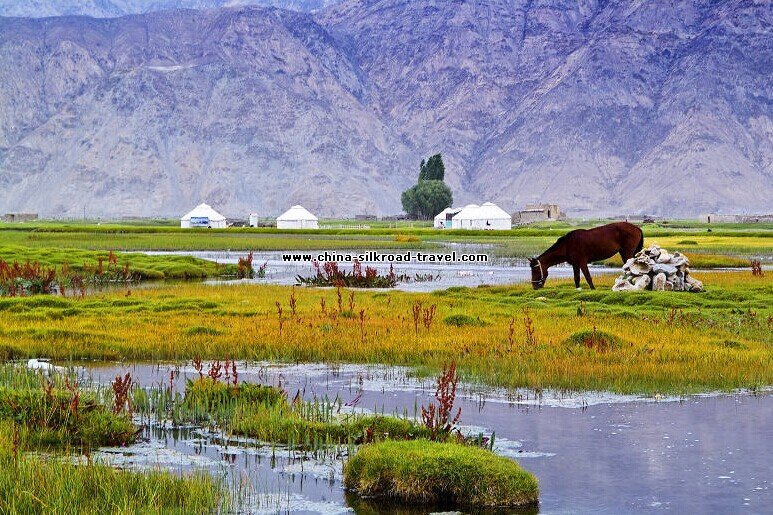 Taxkorgan Holding a lot of glaciers and many rolling valleys，Taxkorgan is located in the east part of Pamir plateau. It is the link of central Asian and west Asian and a fortified position as well. It is the border city，which is only 200 kilometers far from Su site，the city of Pakistan，1000 kilometers away from the Islam Fort and nearly 1000 kilometers far away from Dushanbe ,the capital of Tajikistan. Taxkorgan county is a Multi-ethnic located region withTajik as its main nationality. The other nationalities include Han，Uygur，Kirghiz and so on.here，with many nationalities，is full of songs and dances.
The Tajik herds This scene makes me think of a sentence of a poet：“the vast sky，the boundless wilds，the lush grass and fleshy livestock can be seen everywhere.”
The big temperature difference In Pamirs plateau，there is a big temperature difference within one day. So one should wear thin clothes in the day time while wear thick clothes in the evening.

After buffet in the hotel, we will visit the Stone city first, then drive back to Kashgar.
Meals: Breakfast
Accommodation: In Kashgar Tianyuan Internationa Hotel. 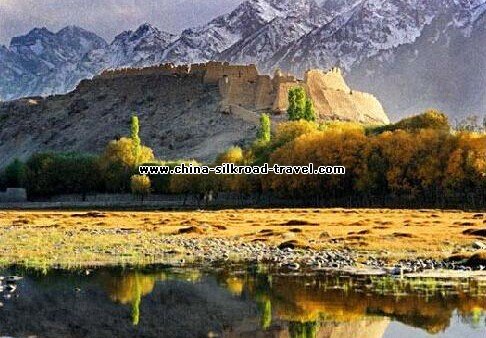 The stone city of Taxkorgan Locating in the north part of Tajik Autonomous county of the Taxkorgan,the stone city is the famous site in Xinjiang.The design of stone city is very special：All the castles built on high hills——they are very dangerous although they are small.Outside the castles,there are different kinds of ramparts with overlapping stone hills and piling up small stones.In Han dynasty,this place was the capital of puli state,which was one of the 36 states in the western regions.In the period of Hepantuo,the outline of the stone city began built.Since the government of Tang Dynasty united western regions,a lot of detention centers located here.The out looking of the stone city had remained the same until the beginning of the Yuan Dynasty because it was expanded at that time.And in 20th year of the reign of Qing Emperor Guangxu,the Qing Dynasty built Puli Hall here and did some maintenance and updating to the stone city.Finally,it became the capital of Tajik,from then on; with the days passing by,it gradually became worse and worse.

Today you will have the opportunity to visit the famous livestock market of Sunday bazaar, after the lunch in the bazaar, we will visit the Idigar Mosque, Apak Hoja Tombs and walking in the old town, then we suggest the long-sleeved clothes for you today for visiting the mosque.
Meals: Breakfast
Accommodation: In Kashgar Tianyuan Internationa Hotel. 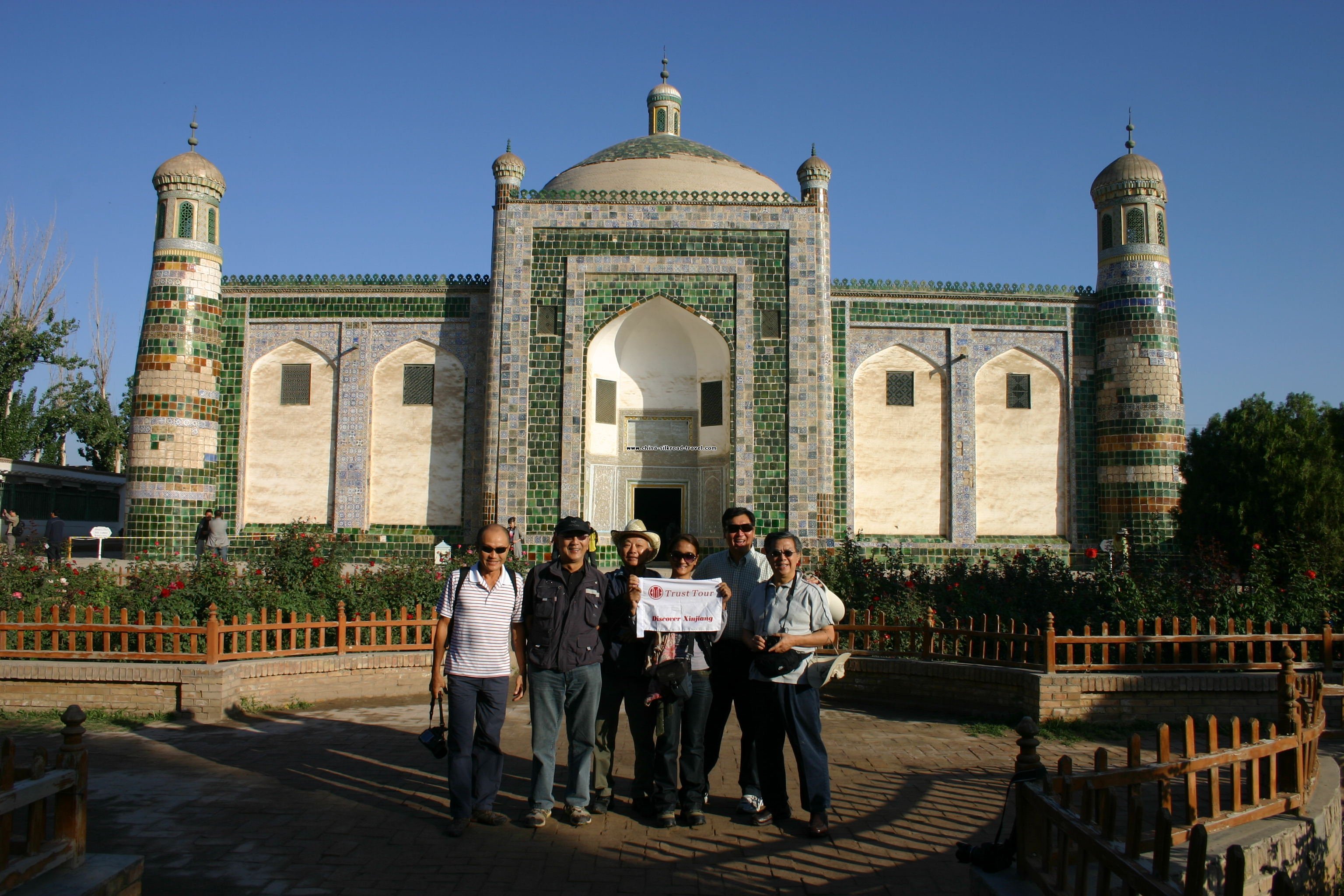 Id Kah Mosque is the large Mosque in China and most famous one in Xinjiang. The Mosque started to build in the mid of fifteenth century, and has gradually developed to the present size. Id K ah Mosque, with about 16800 square meters in area, consisting of Pray Hall, the Koran teaching Hall, The Corridor, the Arches and other buildings attaching to it. The Pray Hall of the mosque can hold 4000 prayers is supported by 140 carved wooden pillars.The buildings of Id Kah Mosque look magnificent and solemn, and display the artistic styles of Islamic mosque architectures.
Apak Hoja Tomb This Mazar is the holiest place in Xinjiang and an architectural treasure Built in 1640,it is reminiscent of the Central Asian artistic style of Samarkand or Isfahan. A handsome blue-and-white tiled gate leads into the compound, which includes a small religious school and the Abakh Khoja family tomb. The latter is domed and faced with multi - colored tiles. I t most complete Islamic tomb of the Qing Dynasty up-to-now in China.
Old town will provide a sense of what this legendary Central Asian hub was like in the days when the Silk Road was at its zenith. 500-year old remnants of the city wall, narrow lanes and colorful multi-ethnic crowds combine to make Kashgar's historic district a highlight of any visit to the city..

After breakfast,You will be transferred to the airport and take the flight back to your destination based on your flight.

* Lunch and Dinner through out the itinerary
* All the domestic flights with tax listed in the itinerary
* some activities such as camel riding, horse riding, boating cruiser etc.
* Personal expenses and tips to the guide and driver.