Turpan features a breathtaking landscape and diverse culture. Known as the " perfect ruin of earth building," Jiaohe Ruins is used to be the capital city of the former Jushi State. In Chinese, "Jiaohe" means Intelligence is bound to exist where two rivers meet. The historical records and excavation reveal evidence of a prosperous ancient trading center and military stronghold from 1,600 years ago. Owing to the arid climate and remote location, Jiaohe remains relatively intact, leaving us a rare example of an earthen castle, the largest, oldest and best-preserved earthen city in the world.
Jiaohe Ruins stands isolated on a 30-meter-high plateau in the Yarnaz Valley, 10 kilometers east of Turpan. The whole city of Jiaohe Ancient City stretches about 1650 meters from south to north and 300 meters from east to west. With history about 2,000 years, the Jiaohe Ancient City was controlled by the residents of Gaochang.
Turpan Jiaohe is a city without walls and trees, and it used to be one of the most prosperous cities on the ancient Silk Road. It is an ancient city in the western region that enjoys equal popularity with Loulan Ancient City, known as "Oriental Pompeii City." At present, this ancient city is one of the most well-preserved urban relics in China for more than two thousand years. When you visit the Jiaohe Ruins, you can not only enjoy the culture of western regions but also experience the vicissitudes of history, which is entirely worth a visit.

The History of Jiaohe Ruins:

Jiaohe Ruins was founded and built by Jushi people from the 2nd century to the 5th century B.C., and it reached a period of great prosperity during the Northern and Southern Dynasties and the Tang Dynasty. At the end of the Yuan Dynasty, because of the brutal war, the ancient city was severely damaged and finally abandoned, as was its glory and prosperity of over 2000 years. Miraculously, owing to the arid climate and remote location, the ancient city of Jiaohe, remains intact, leaving us a rare exemplar of an earthen castle.

The Building Structure of Jiaohe Ruins:

The existing Ruins of Jiaohe City preserves the scale during its summit, mostly during Tang Dynasty. Northwest of the terrace is an ancient grave before the Tang Dynasty, which has been wholly robbed and damaged, and these buildings were concentrated within a scope of nearly 1,000 meters southeast of the terrace. A gate was built on both the east and south walls. Besides the absence of walls, the building style has another significant feature, i.e., most buildings, including full streets, were cut out from the first earth. Cave dwellings were also directly cut from the early universe. Most of the single-story houses were composed of four walls left during cutting the primary ground and supported by wood. 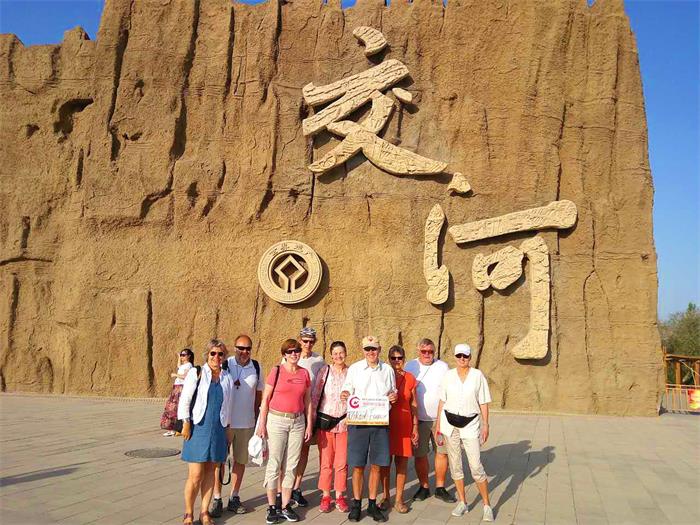 What to Visit in Jiaohe Ruins:

When I arrived here in 2009, I was attracted by this mysterious and exotic place. Near the Jiaohe Ruins, you can see the shade house for drying grapes on both sides of the road. In August, the weather is scorching. The sun casts on the wall, which is dry and dazzling. Fortunately, there were few tourists. Although the past prosperity of the ancient city has obliterated, this well-preserved site and a more atmospheric spot to wander and imagine times gone by than the city at Gaochang. The well-preserved temples, pagodas, and streets are dotted around. A Buddhist monastery marks the center of the town, and there are some ancient filled wells here too. The crumbling sand-colored walls of the buildings reflect the color of the desert and the surrounding dunes. Allow at least one hour to explore this charming city. Here we listed five attractions in Jiaohe Ruins.
1. Cultural Relics Exhibition Hall of Jiaohe Ruins: Many cultural relics have unearthed in Jiaohe Ruins, such as the Lotus Eaves tile of Tang Dynasty, Lotus Sutra, Human Face Pottery Lamp, etc. Therefore, under the south entrance of the ancient city, there is a Tang style building - Jiaohe Ruins Cultural Relics Exhibition Hall, which displays the sand table, historical materials, and unearthed cultural relics.
2. East Gate of Jiaohe Ruins: The east gate is integrated with the city and stands on the Loess cliff bank. So far, the ruins of the gate are well preserved.
3. City Square: In ancient times, the city square is the place where Jushi people carried on the trade. The square is close to the official district. However, there is a mysterious cemetery in the north of the official community. It has no epitaph and the record of history. So far, it is a mystery.
4. Jiaohe Temple: Situated in the west of the avenue, the low buildings with sparse small temples were residences for commoners, while the large ones in the east were for aristocrats and troops. At the end of the avenue stands a large, well-preserved Buddhist temple, Jiaohe Temple, with an area of 5,000 square meters.
5. South Gate Remain lies on the cliff ae south end of the city, with a gateway in the east-west direction, measuring 6.8-meter-wide and 11-meter-long. The north wall was made of earth measuring 14-meter-high and houses remains of 2 vaulted niches. The south wall is 5.2 meters high, and houses remain of 4 arched niches. Behind the gate is a semi-enclosed 6-meter. High defensive wall with courtyard wall body and plinth inside, South Gate served as the main gate of the Yar City, linking between the Central Avenue of the inner city and roads south of the outer city.


The Layout of Jiaohe Ruins

The layout of Jiaohe Ruins is divided into three parts, at the north end of the main road, you will see a large-scale monastery and the magnificent towers on the north of the city, which may be the pagodas for the burial or worship in ancient times. Continue to visit; you will see the magnificent underground buildings in the southeast, with an 11 square meter patio on the top, according to the investigations, it's presumed that the official Yamen of Tianshan County may follow the residence of Anxi Frontier Command.
Besides, there are many handicraft workshops in the west. On both sides of the main road are numerous terraces, behind which are "fangs" divided by crisscrossing short lanes: the residential sites and handicraft workshops such as textiles, wine-making, and shoemaking. By the way, on the east side of the ancient city, there were once military barracks, leaving behind old houses with various functions.

The Best Time For Photography in Jiaohe Ruins:

Every sunset is the most appropriate time to visit Jiaohe Ruins; at this time, the walls are yellowish and reddish, which is the perfect time for photography.

How to Get to Jiaohe Ruins: