Home > China Tours > Silk Road Group Tours >
Summary: Northern Xinjiang is the paradise for the travelers who love the natural landscape. our 13 days northern Xinjiang tour include the Kanas, the last pure land in China, Sarym lake which is the pearl lake in the moutain,Naraty and Bayinbuluk are the best pastureland in China where still have the nomadic life of the local Mongolian and Kazakhs.drive in the deep of the Tianshan mountain, appreciate the amazing view and go to Turpan, the most important town in the ancient silk road.We guaranteed you the best xinjiang holiday and great service.during the tour, we will arrange the local fruit for you on the way. 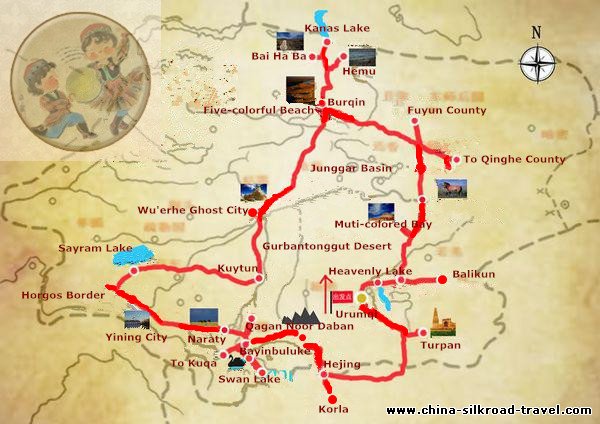 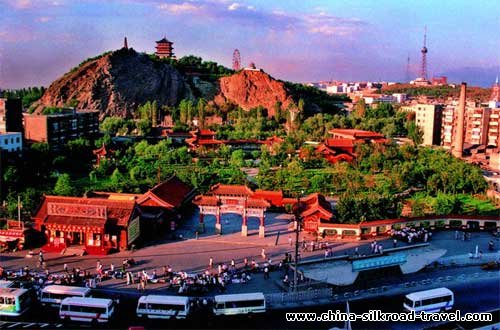 Depart to Urumqi, the capital of the Xinjiang Uygur Autonomous Region.Upon arrival,our nice guide will meet you in the lobby of arrival,  transferred to the hotel and the rest of the day is free for you to have a good rest. Urumqi is the capital of the Xinjiang Uygur Autonomous Region.  With an arid climate of the temperate zone, Urumqi is inhabited by the Han, Uygur, Kazak, Mongolia and other nationalities of over 40, totaling over 3 million in population. Urumqi means the most beautiful pastureland in the old Mongolian language, sits amidst beautiful scenery. The snow-laden Tianshan Mountain lies on its east. you can enjoy the splendid snow mountain of Bogoda Peak afar in the city. Have a good rest in the hotel and make the good preparation for the Northern Xinjiang Tour. 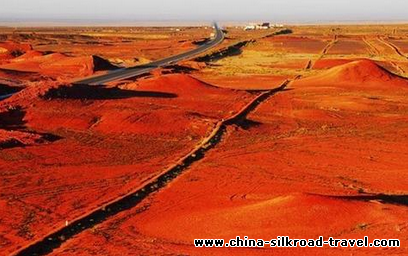 After breakfast in the hotel Drive to Fuyun County and amazed by the Multi-colored Bay, a marvelous desert scene which located at the western edge of the desert in Kalamah Nature Reserve. You will see a typical Yadan landform with shale of red, yellow, orange, green, green ash, gray and black.Along the journey, pass by: Huoshaoshan (Burning Mountain), where you will witness a sea of red, caused by burnt rocks that look as if they are still burning along the hills. today you will arrive in the twon around 8pm, check into the hotel and have dinner.
Meal: Breakfast, Lunch
Accommodation: Bai Fulong Hotel 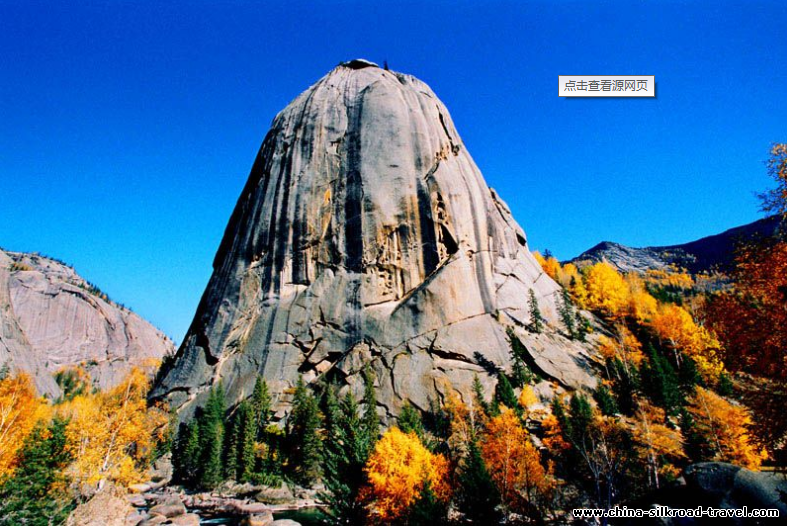 After buffet breakfast in the hotel, you will start your trip from KeketuohaiNational Geological Park.For thousand years, Keketouhai is famous for its abundant resources, beautiful mountain scenery,the long history, the legendary pastureland culture and primitive human culture and many more. Then you will see Irene Wood Lake, also known as "Haizi Kou" and explore the Tunnel of Mine No 3, which comprises of many types of minerals. Take a tram ride and travel along Irtysh Grand Canyon till you reach Shenzhong Mountain and visit the "Earthquake Museum".Thereafter, travel to Burqin for dinner and overnight stay. If time permits, you may stroll along Burqin local night market to enjoy  the fish BBQ and local made Beer which is called Kawas. 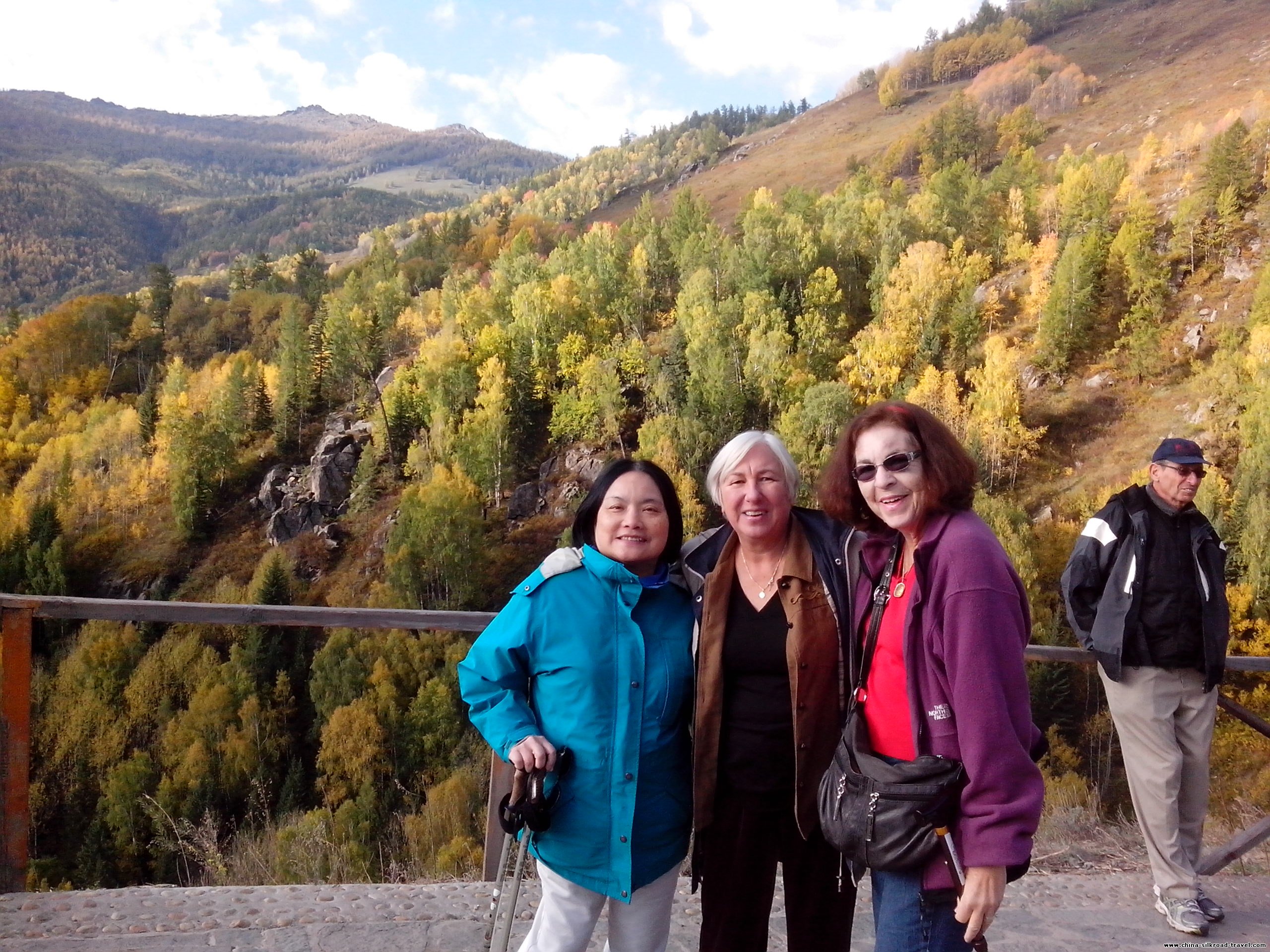 Our Client from USA in Kanas

After breakfast in the hotel, drive along the mountain road to Kanas Nature Reserve, China's only European-like ecological site that has been awarded the title of the "Pure Land of the World" due to its unspoiled natural scenery. En-route, visit Irtysh Lake, the only lake in China that flows directly into the North Pacific Ocean, along with Burqin River, Kanas River, Wolong Bay, Moon Bay, Shenxian Bay and Cocoa Surrey Lake. Kanas Lake is like a string of pearls in the Alps as it branches into smaller river streams which look like a multitude of islands amidst the forests and grasslands. upon arrival have lunch and then  change the shuttle bus to the inside of the Reserve to enjoy the beautiful secenery, boating cruise or walking along the lake are recommend. later afternoon back to Jiadeng yu  disctrict to check into the hotel. dinner and rest 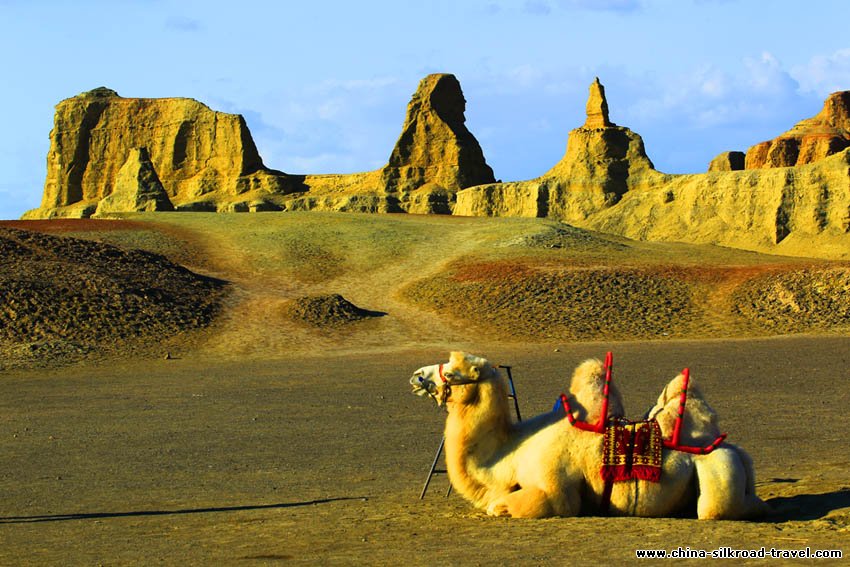 Enjoy the sunrise and after breakfast, travel along the Gurbantunggut Desert to the Urho Ghost City, also known as Wuerhe Wind City", a unique wind-eroded geological area commonly referred to as "wind city" because of the frequent howling winds. Due to its eeriness, it is also commonly referred to as "Ghost City". It is located northeast of Karamay city. Some were like pillars of strength supporting in sky or tremendous round towers, some seemed like exquisite cared pavilions, alters arches and towers, some with clear edges and corners, were exactly like magnificant ruins of ancient castles. Continue journey to Karamay City. The name of the city comes from the Uyghur language, and means "black oil", referring to the oil fields near the city. Since the city officially established for petroleum production in year 1955, it has become a modern integrated oil complex, a 'petroleum city' nowadays. 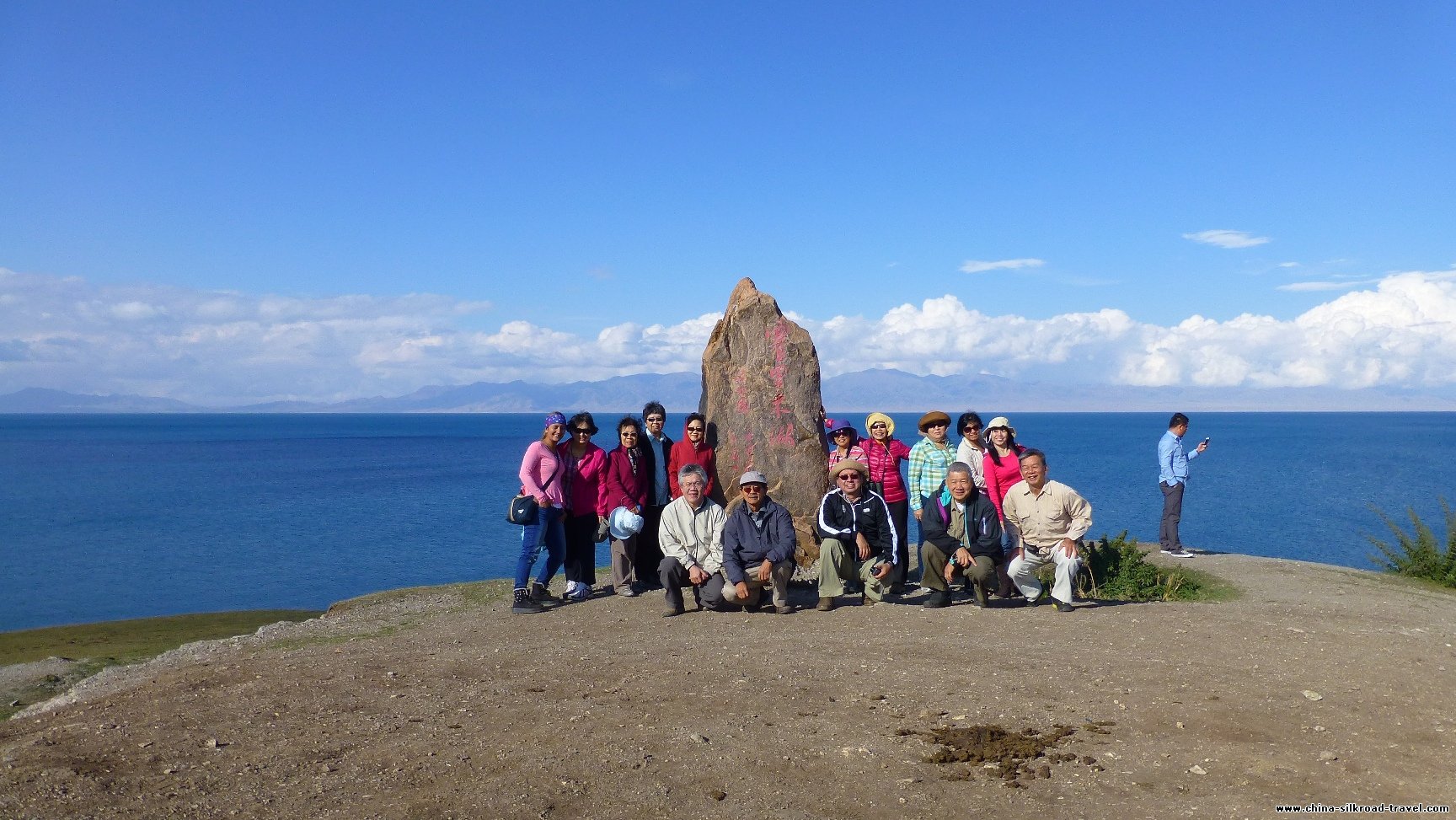 After breakfast start our trip to Ili Valley and passing by Kuitun and Shehizi which is the symbol Bingtuan, which is either a city or a military organiztion. take the excursion tour to Sayram Lake, known as the last drop of tears of the Atlantic. This alpine lake is an amazing natural water resource which is circled by green grasslands. It is like a brilliant emerald inlaid in the basin surrounded by Tianshan Mountain. The water in the lake is very pure and clear. Flocks of ducks and swans coast on its surface. Flourishing cypress and cedar trees cover the whole mountain range. Cottages scatter the foothills of the mountains. Horses and sheep graze on the mountain slope.Guozigou Valley is length of 28km along the road Wu, the general direction in Iraq, is the ancient Silk Road in Xinjiang, North Road.

Meal: Breakfast, Lunch Accommodation: Wooden house or Yurt in the Fruit Vally by the Lake 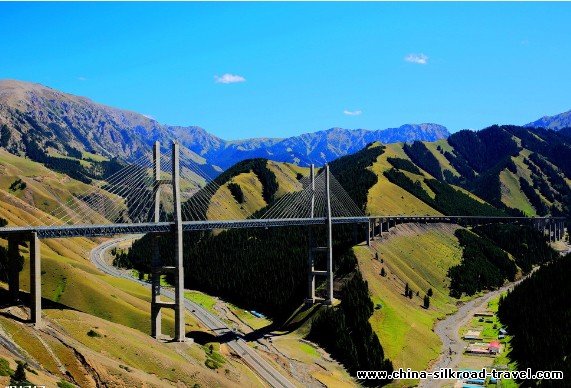 The highest bridge in the world above Fruit Valley

After breakfast take a short trekking in the forest to enjoy the fresh air and then head  to the capital of the Ili Kazakh Autonomous Prefecture – Yining via Guojigou Valley. drive on the highest bridge in the world to experience the landscape of the Fruit Valley. There are about 35 minorities that live and work in this city such as Han, Uygurs, Kazak, Hui, Mongolian, Uzbek, Russians, and more. Visit the Uyghur Culture Street in Yining to experience the folklore of the local Uighurs and then Excursion tour to Naraty Grassland. The grassland has quiet streams, fresh air and abundant vegetation. It is home to a 10th of China's Kazakh community, and its rolling hills are dotted with their camps. The landscape is carpeted with wild flowers, upon which wander herds of goats, sheep and cows.

Meal: Breakfast, Lunch
Accommodation: Yurt or the Wooden house in the Grassland 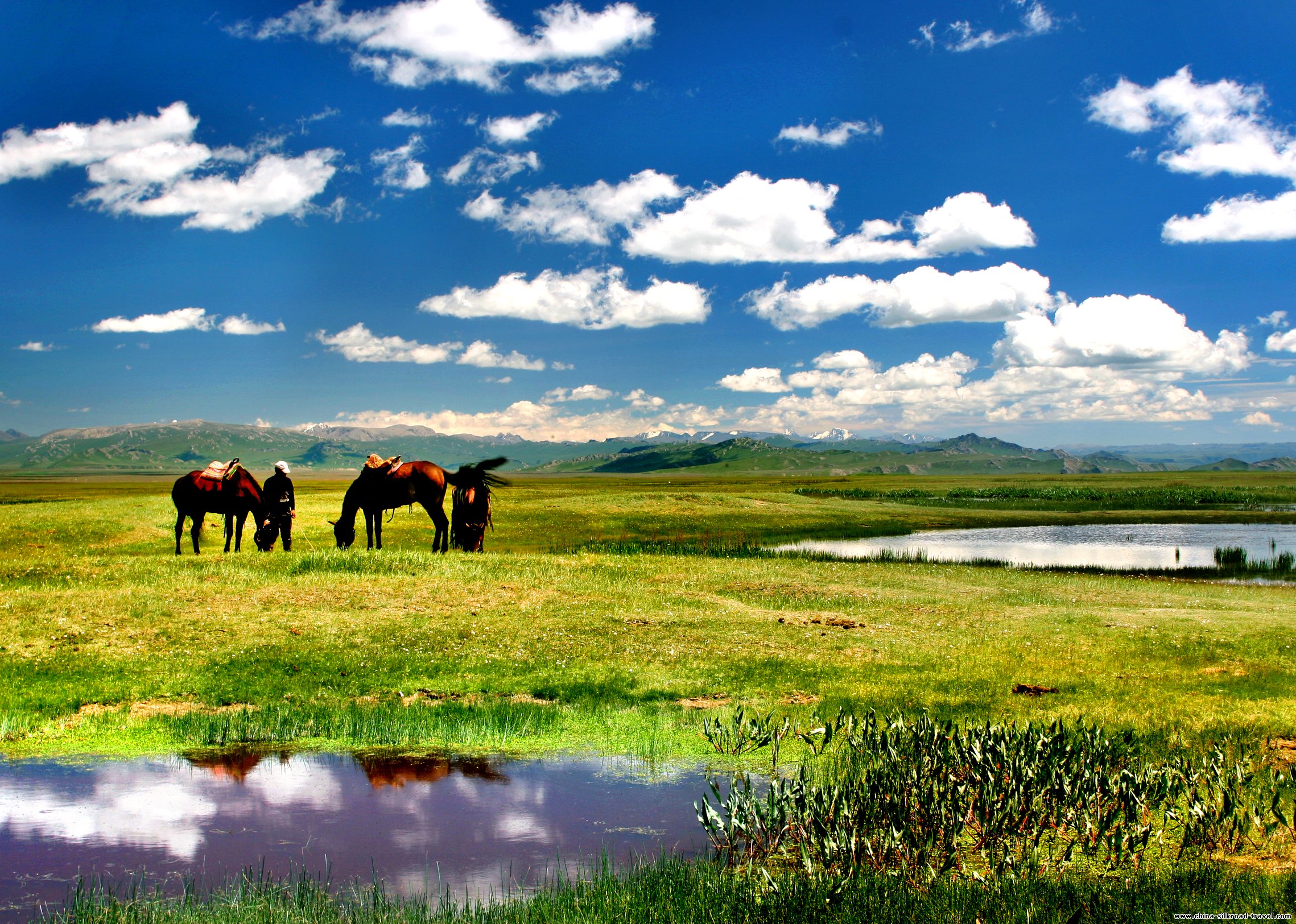 After simple breakfast in the hotel, enjoyed the nomadic life of the modern Mongolian and Kazakhs in Naraty Pastureland, head to to Bayinbuluk and enjoy the grassland there.taking up 1,000 square kilometers. In 1986 it was listed by the State as the national nature reserve．It is a paradise of flocks of swan. The swans are like white sails wandering on the lake,carefree and contenting themselves.Therefore it is offered the name"Swan Lake". please note today there might be some check point for your travel permit due to the road is used for military transportation. check into hotel upon arrival. 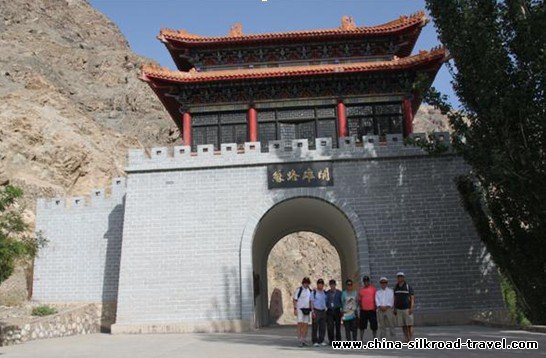 Our Singapore Group at Iron Gate

After breakfast drive in the deep of Tianshan Mountain, enjoy the beautiful scenery and drive to Korla, known as the "City of Pears" and the "City of Petroleum". It’s the capital city of the Bayingholin Mongol Autonomous Prefecture which is the largest prefecture in China, encompassing the eastern half of the Taklamakan Desert and extending to the borders of Tibet, Qinghai and Gansu Provinces. The fragrant pears produced in Korla are well-known in China for their sweetness and flavor.Visit the Iron Gate upon arrival which was a very important pass in the ancient silk road. and then Walking along the Peacock River after dinner to feel the local’s city life style. 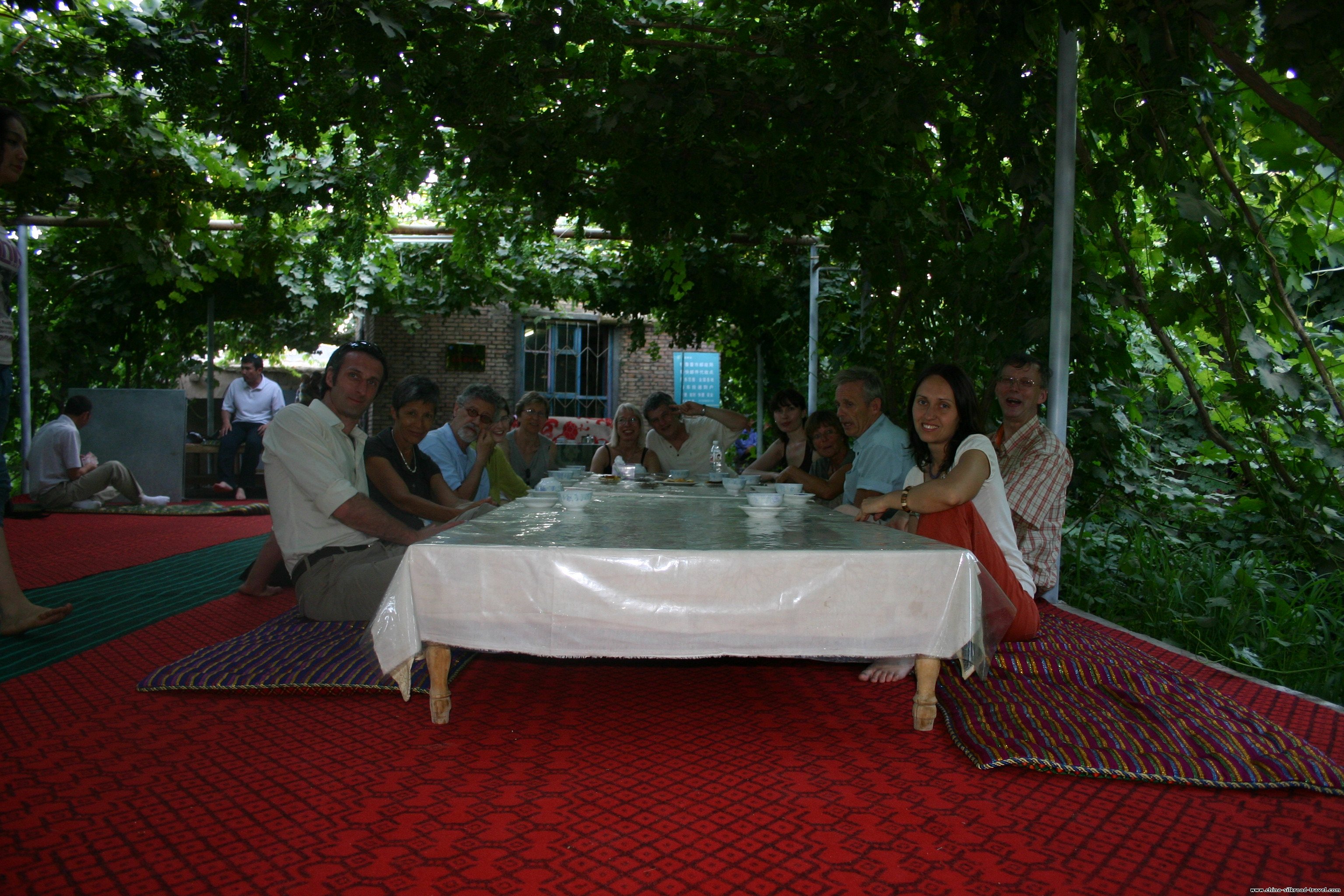 Our German Group in Uighur family for dinner

After breakfast head to Turpan which is famous for the grapes and the importance of the ancient Silk Road Route. Visit the Emin Minaret is the largest ancient Islamic tower in Xinjiang which was built in 1777 and Jiaohe Ancient City, the best preseved ruins in China with the history of 1600years due to the typical dry weather in Turpan. Karez System is one of the four great irrigation system of China and it is a crystallization of ancient people's wisdom and the life source there. The dinner of tonight will be arrange in a local uighur family with the beautiful grape yard.
Meal: Breakfast, Dinner Accommodation: Turpan Grand  Hotel 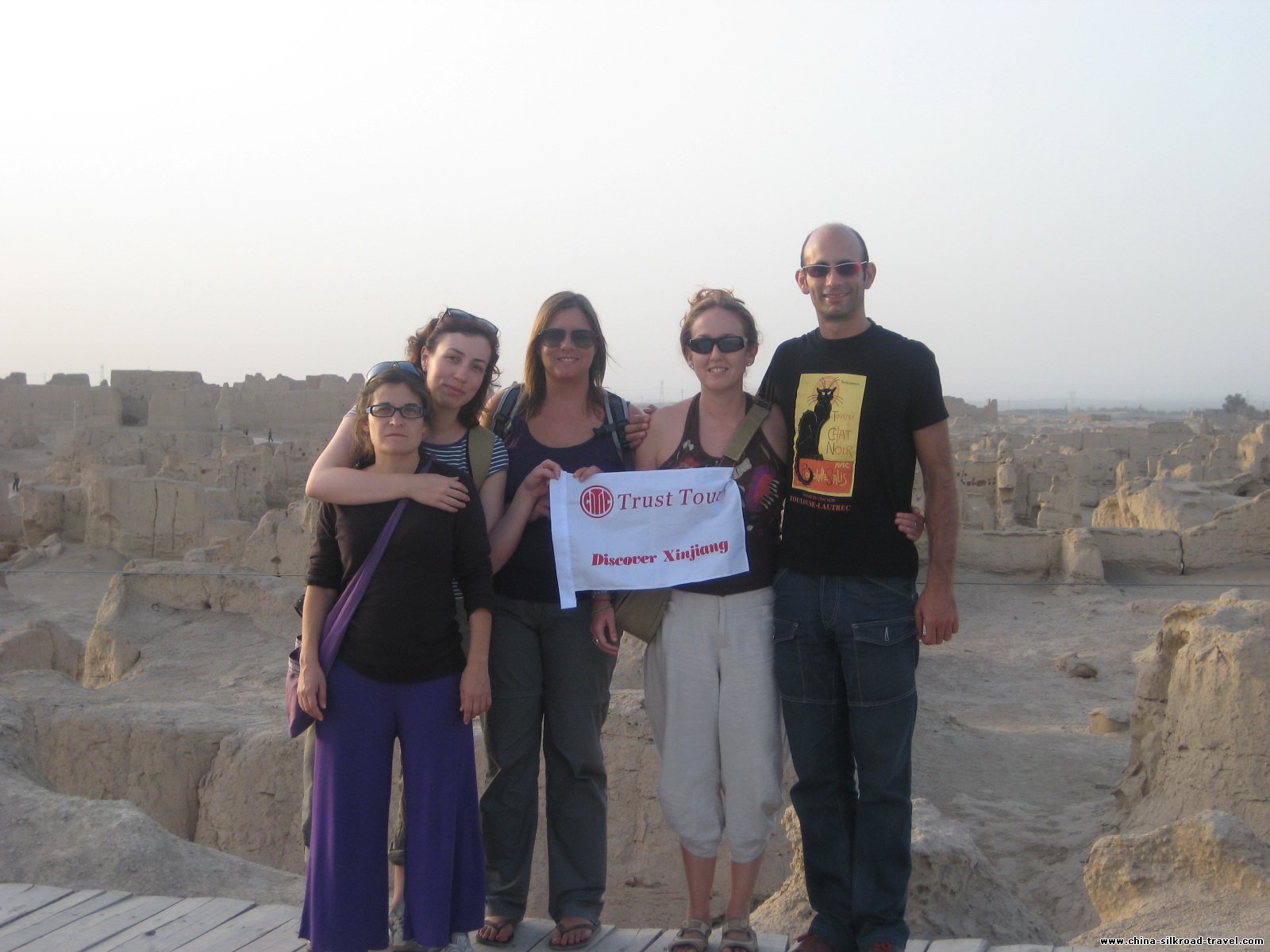 Our Spain Group in Jiaohe Ruins

Today continue visiting Turpan to Flaming Mountain, which is mentioned in a classical Chinese novel The Journey to the West is the hottest place in China and Gaochang Ancient City are witnesses to the long history of Turpan which is also the famous trade mark in the ancient silk road. Aydingkol Lake, at the bottom of Turpan Basin, is the lowest point in the country, and Astana Ancient Tombs which is also called the natural underground museum. Bezklik Thousand Buddha Caves, one of the earliest grottoes in China. Tuyu Valley, where Von Leqoq from German settled when he adventured to Xinjiang . In the afternoon back to Urumqi via the Asia’s largest Wind Power Plant ~ Dabancheng Power Statione.
Meal: Breakfast, Lunch Accommodation: Tumaris  Hotel 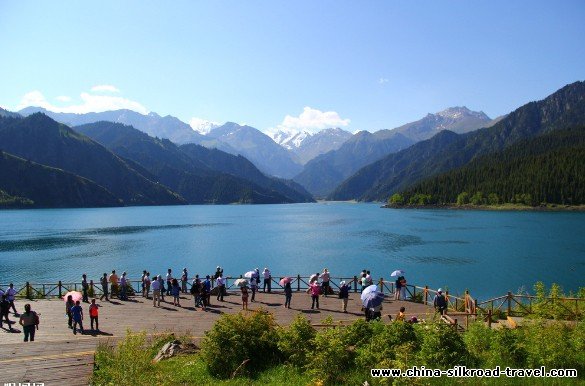 In the morning visit the Xinjiang museum, with the fascinating collection of minority clothing, musical instruments,etc, has  a section devoted to the history of early settlements along the silk road. and then head to Heavenly lake, covering an area of about 5.9 square kilometers. There are eight beautiful scenic spots in the lake scenic area, they are “A Ray of Stone Gate”, “Dragon's Pool and Green Moon”, “Magic Needle for Guarding the See”, “Three Stones Bearing the Sky”In the afternoon back to Urumqi, stroll along the Xinjiang International Grand Bazaar. Covering an area of 100,000 square meters, offers a large variety of global and domestic delights, local products, traditional handicraft and many more!
Meal: Breakfast, Lunch Accommodation: Tumaris  Hotel

The trip comes to its end today. Please check out of the hotel and you will be transferred to the airport for your onward trip. If you want to extend your trip, you are welcomed to look into Central asia and great silk road tours

Note: Northern Xinjiang tour from Malaysia: the International flight from Kuala Lumpur to Urumqi return is about 900usd/pax include the tax


Prices are in U.S. dollars and based on per person

*Private transportation with good AC ( Excellent and experienced driver guaranteed)
*Accommodation with breakfast (twins bed shared room)
*English speaking guide (Professional guide service)
*All the entrance fee through out the itinerary(Shuttle bus in Kanas,Naraty,Bayinbuluk and Heavenly Lake are included)
*Travel insurance (please note: only the International travel agency have the insurance service)
* Meals listed in the itinerary, this route include breakfast and lunch
*Travel permit ( as the area from Bayinbuluk to Korler is not open to foreign tourist, our company will prepare the travel permit for you)
* Two bottles of mineral water per person per day

* Dinners through out the itinerary
* All the personal expensed and tips to the guide and driver
* Some activities such as boating, horse riding and camel riding ect