Located at the critical line of communications connecting Southern and Northern Xinjiang 新疆, the north part of Nalati Grassland 那拉提草原 connects to Gongliu 巩留 and Xinyuan County 新源县, and west part to Hejing County 和静县. East part comes from Aikendaban of northwest Hejing, and the western part reaches Wulandaban. It is about 150 kilometers long and 3,000-4,500 meters above sea level. The northern slope faces the wind, and yearly rainfall is 400-700mm. A vast stretch of wild apple trees has been found in Xinyuan County at the 1500-2,000 above sea level. It listed as a nature reserve. The No 218 National Highway runs across the Tianshan Mountains, along the north part of Nalat grassland. Furthermore, Nalati Grassland boasts a sub-alpine belt, and it has been a great state land ever since the ancient times, and there are wide river valley, high mountains, the crisscrossed deep gores, the flourishing forest, and open grassland. It crowned as the "Sky Grassland 空中草原" and "Garden Highway 花园公路."

Nalati Grassland 那拉提草原 has a history of over 3,000 years and is home to the Kazakh minority, who are known for their hospitality and folkloric singing and dancing.
It is said that during Genghis Khan's western expedition 成吉思汗西征, a Mongolian troop was marching from the depths of the Tianshan Mountains 天山 to Ili 伊犁. It was spring, but the snow-filled the mountains. Hunger and cold made the army exhausted. They didn't want to cross the mountains, and suddenly they saw a vast grassland full of flowers and brocade, the gurgling spring and streams murmured over the lush green grass. It looked like a marvelous wonderland, so soldiers shouted happily, "Nalati, Nalati."

What to Visit in Nalati Grassland:

Nalati Grassland is one of the popular travel destinations along the silk road 丝绸之路. Here you can enjoy snow peak, pine forest, hills, and meadows, to name just a few. Wusun's Ancient Tomb 乌孙古墓 is the critical site to know the origin and development of Kazak, and it is one of the three cultural relics and wonders in Ili. The valley scenery, nomadic cooking smoke, and yurt riders are the unique charms of Kazak. 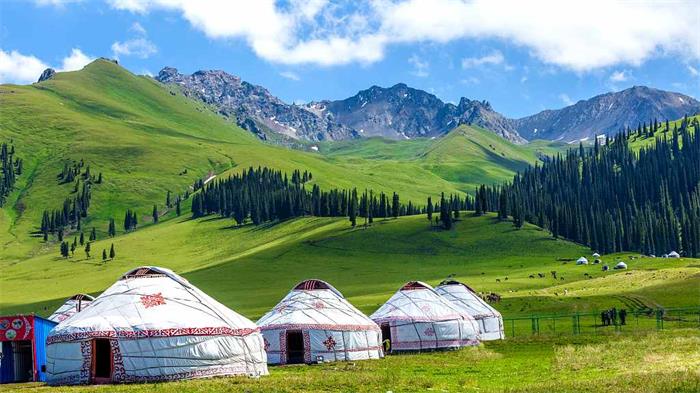 Summer pasture 夏牧场 is also known as "Sky Grassland," and the original name of air grassland is related to its altitude. The average elevation of summer pasture is 2200 meters; it is an Intermountain basin with beautiful grass, fertility, and water. Every June to August is the golden season of Summer Pasture; at that time, travelers can relax and enjoy the natural landscape. 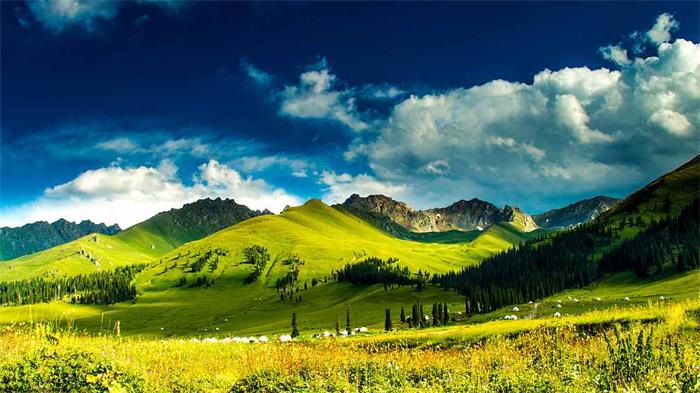 
Geology and geomorphology of Nalati Grassland:

Nalati grassland is a middle mountain grassland. It is a crucial summer pasture in Gongnaisi Grassland 巩乃斯草原, which is connected with Nalati Ridges 那拉提高岭 in the southeast and broken down along the valley at the upstream of Gongnaisi River in the northwest.
Nalati Grassland is situated in the hinterland of Tianshan Mountain, at the east end of Ili River Valley. Between 85 ° 17-28 E and 43 ° 01-15 n, the total planning area is 960 square kilometers.

Other Travel Information of Nalati Grassland:

Nalati Grassland has a continental semi-arid climate, with an average altitude of 1800 meters, annual rainfall of about 880 mm, and an average yearly temperature of about 20 ℃.
The best time to visit Nalati Grassland is between June and September when the grassland carpeted with colorful wildflowers and wandering herds of goats, sheep, and cows.


How to Get to Nalati Grassland:

The Nalati National Forest Park can be reached via airplane or shuttle bus. Tourists can also depart from Yining City and drive 340 kilometers to the park.

Go to Nalati Grassland by Air:

1. The temperature difference between day and night, so that a long-sleeved coat and trousers are necessary during the visit.
2. Tourists should prepare several bottles of water if you are first there. The local water is saline-alkaline water, so visitors may be hard to get accustomed to it.
3. A torch is advised to prepare at night because it is hard for you to tell the directions in the evening.
4. Sun cream, sun umbrellas, or hats are necessary for the local intense ultraviolet rays.
5. The safety needs to be paid more attention, because one may easily get lost if you drive or ride a horse out of designated areas.
China Tours
Silk Road Travel Guide
Contact Center