Home > China Tours > Silk Road Group Tours >
Summary: Guaranteed Silk Road Group tour on 29th Sept, Great silk road highlights deal Small Group: 2-6 pax. This tour will take you to the mysterious and attractive historical Silk Route in China, where you will visit many historical wonders, Buddhism temples and beautiful Chinese classical architectures and historical ruins as well as the weekly Great Sunday Bazaar, where kaleidoscope of scenes from the pages of A Thousand and One Nights 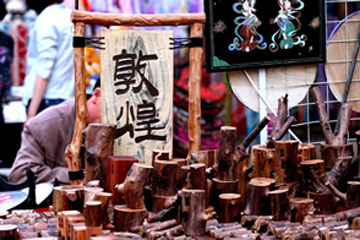 Our nice guide will meet you at the airport and be transferred to the Hotel.
Shazhou Night Market,It is not only famous for its tasty snacks and local specialties but also for its well-regulated management. The whole night market is 1000 meters long in total. There are shops selling handworks and souvenirs, food stalls and fruit stands. When the fruit season comes, visitors can buy juicy fruits at reasonable prices.guide will meet you at the airport, check in the hotel upon arrival. And visit the Shazhou night market.
Meals: NO Accomodation: Yangguan 3* 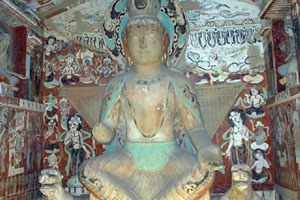 Visit Mogao Grottoes, Echoing-Sand Mountain and the Crescent Lake, Camel Riding
Mogao Grottoes, Constructed over a millennium, from the 4th to the 14th centuries, the caves hold the world's richest treasure house of Buddhist sutras, murals and sculptures.Cameras are not permitted.
Echoing-Sand Mountain, Crescent Moon Spring is 6km south of Dunhuang in the Singing Sands Mountains and is quite literally an oasis in the desert. The spring's name derives from the crescent moon shape taken by the small pool of spring water between two large sand dunes. Although the area is very dry, the pool doesn't dry up as one might expect.
Train infos (overnight soft sleeper with good aircondition, 4 berths in one compartment)
Meals: Breakfast Accomodation: Soft Sleeper Train 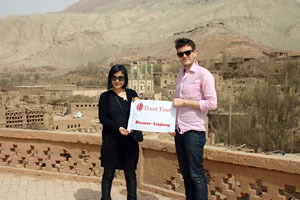 Our American Clients in Tuyoq valley

Meet guide at train station, drive to Turpan (40mins).check in the hotel.,Visit Astana Tombs, the Flaming Mountain, Bezklik Grottoes and Local Uyger family in the Vineyard
Astana Tombs : covering an area of 10 square kilometers, the Astana Tombs are the graveyard of the residents lived in the Gaochang City in the Jin-Tang times, including large sized family graveyard. had been excavated 13 times, a great number of cultural relics have been unearthed, Known as “the Underground Museum.
Bezklik Grotto . “Bezeklik”means “a place with beautiful decoration”. There are 83 numbered caves; among them 40 preserved murals totaling 1200 square meters. In some caves one can find that Buddhish murals are painted on Manichean murals.
Meals: Dinner in the local Uighur family Accomodation:  Turpan Hotel 3* 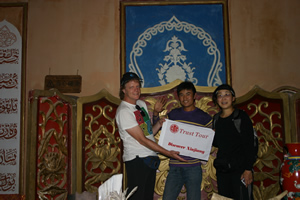 After breakfast start our Turpan excursion to Jiaohe Ruined city which was built in the 3rd Centry AD includes city gates, streets and lanes, government office, temples, domestic houses, cave houses, wells, and an underground temple.and then Karez Irrigation system,which, taking advantage of the slopes, draws the underground water to flow by itself to irrigate farmland. Sugong Minerat,was built in the 41st year of the Qianlong period of the Qing Dynasty,It is an embodiment of the ancient architectural arts of the Uygur nationality. after lunch we will head to Urumqi visit Erdaoqiao & International Bazaar.the most welcomed place by tourist especialy by ladies where they can buy some traditional yugur make up cosmetic. Having dinner in the local restaurant around the Bazaar is recommended before we check in to the hotel
Meals: Breakfast Accomodation: Jinggu Hotel 3* 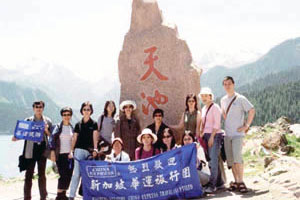 our Singapore group in Heavenly Lake

After the buffet breakfast in the hotel, we will go to visit Xinjiang Museum ,is the main institution to collect and investigate the unearthed cultural relics and specimens in Xinjiang. There are more than 50 thousand pieces of various kinds of cultural relics stored in the museum, among them, the ancient mummies represented by ‘the Loulan Beauty', manuscripts in Chinese, Kharosthi, Qiuci, Yanji, Tibetan, Uigurian and other characters prevailed in ancient Westen Regions, the silk ,wool, cotton and hemp fabrics and folk rainment, etc., are unusual tidbits in the world.and then head to whichis 120kms from Urumqi. Heavenly Lake covering an area of about 5.9 square kilometers. There are eight beautiful scenic spots in the lake scenic area, they are “A Ray of Stone Gate”, “Dragon's Pool and Green Moon”, “Magic Needle for Guarding the See”, “Three Stones Bearing the Sky”, PM around 17:00 take the flight to Kashgar and check in the hotel upon arrival.
Meals: Breakfast
Accomodation: Tianyuan International Hotel 4* 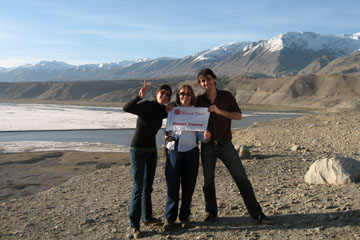 Our Spain clients at Karakul Lake

After breakfast take the drive on the China and Pakistan highway to visit the Karakul Lake and enjoy the Pamir landscape.
Karakul Lake At an altitude of 3,600 m. it is the highest lake of the Pamir plateau, near the junction of the Pamir, Tianshan and Kunlun Mountain ranges. Surrounded by mountains which remain snow-covered throughout the year, the three highest peaks visible from the lake are the Muztag Ata (7546m), Kongur Tagh (7,649m) and Kongur Tiube (7,530 m).
Meals: Breakfast
Accomodation: Tianyuan International Hotel 4* 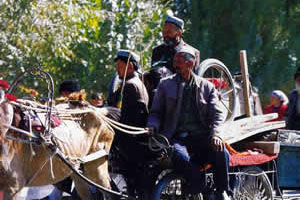 Visit Sunday Bazaar, Id Kah Mosque, Old Town, Apak Hoja Tomb, Handicraft Street
Sunday Bazaar (livestock Market)Streets near this big market are choked on Sundays with farmers and buyers arriving by donkey cart, truck, bicycle, horseback, ute, motorbike or on foot, with their animals. It's loud, lively and cheerful as they arrive, eat breakfast, set up their animals and check out the action. Cattle, sheep (they definitely look different), goats, donkeys, horses have their own sections; sellers show their animals are "good eaters"(most go as livestock not meat) and the entire experience is fascinating and fun.
Id Kah Mosque It is the large Mosque in China and most famous one in Xinjiang.
Apak Hoja Tomb is the holiest place in Xinjiang and an architectural treasure ． Built in 1640 ， it is reminiscent of the Central Asian artistic style of Samarkand or Isfahan.It most complete Islamic tomb of the Qing Dynasty up-to-now in China.
Old town Kashgar is an ancient city, and in walking the streets of its Old Town, will provide a sense of what this legendary Central Asian hub was like in the days when the Silk Road was at its zenith.
Meals: Breakfast
Accomodation: Tianyuan International Hotel 4*

After breakfast you will be transferred to the airport and take the flight back to your destination.

*Private transportation with good AC ( Excellent and experienced driver guaranteed)
*Accommodation with breakfast (twins bed shared room)
*English speaking guide (Professional guide service)
*All the entrance fee through out the itinerary(Shuttle bus in Heavenly Lake are included)
*Travel insurance (please note: only the International travel agency have the insurance service)
* Meals listed in the itinerary
*Soft Sleeper train from Dunhuang to Turpan (4 berths in one private room)
* Two bottles of mineral water per person per day

* Meals not specified in the itinerary
* All the personal expensed and tips to the guide and driver
* Some activities such as boating, horse riding and camel riding ect
* Flight arrive in Dunhuang and leave from Kashgar
* Flight from Urumqi to Kashgar, 200usd/pax