Post Time:2018-12-27 Views:
Located in the northwestern part of the country, Xinjiang Uygur Autonomous Region is inhabited by a mixed population of a number of China's ethnic minority groups, such as the Uygurs, Huis, and Kazakhs. Most of the ethnic groups in Xinjiang are fond of singing and dancing. Although the musical styles vary in different parts of the region, Xinjiang music in general is dance-oriented and rhythmic, and the songs are emotional.
The Uygurs are the most populous ethnic group in Xinjiang. The nine million Uygurs there account for 46 percent of the total population. The ancestors of the Uygurs were nomadic herdsmen who lived on China's vast northern grasslands. In the third century, wars broke out between different tribes and people fled the area to escape. Some tribes moved westward to settle in Xinjiang. They merged with the local people to become the present-day Uygurs.
Uygur means unity in the Uygur language. The largest number of Uygur songs are love songs that are passionate or melancholy. 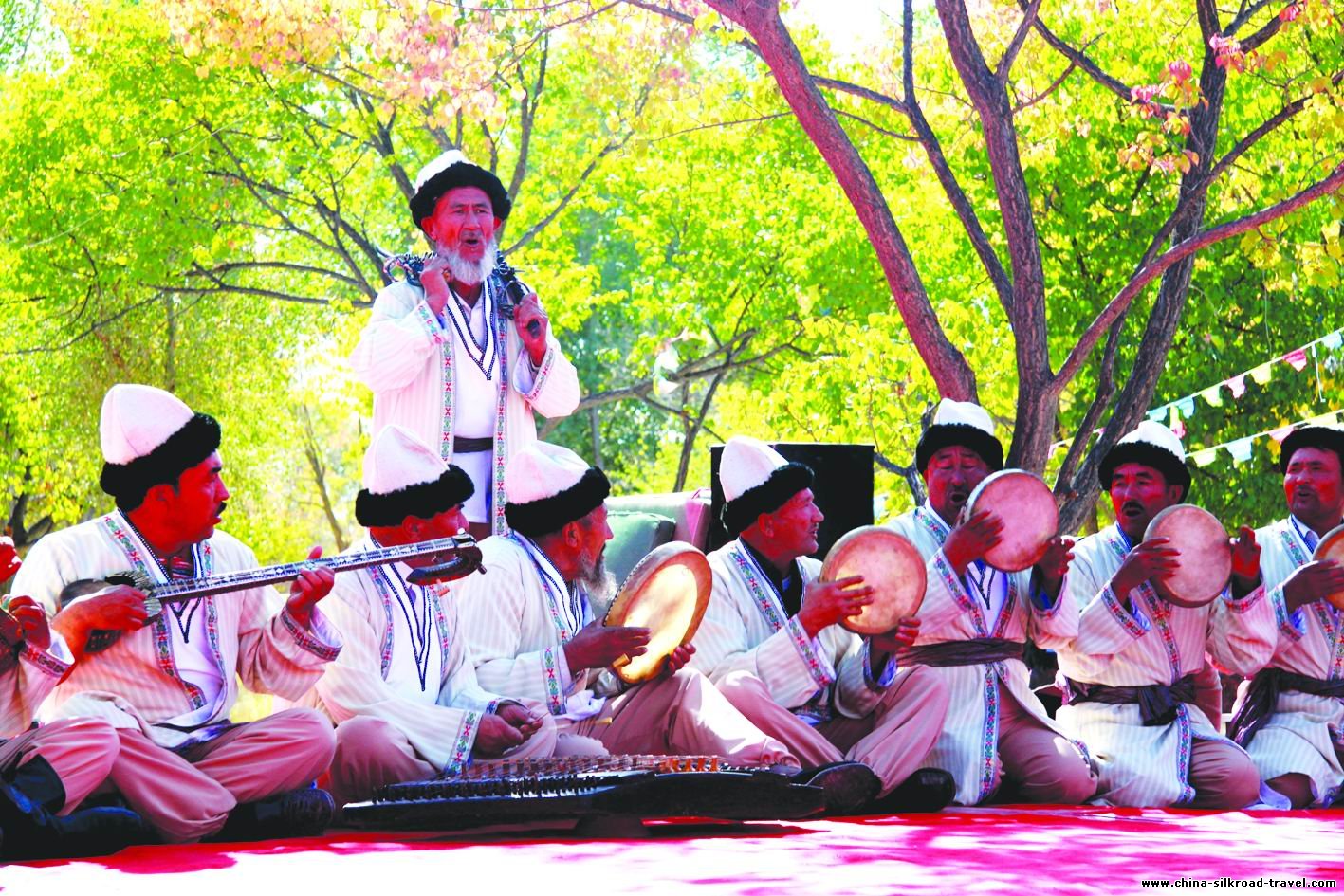 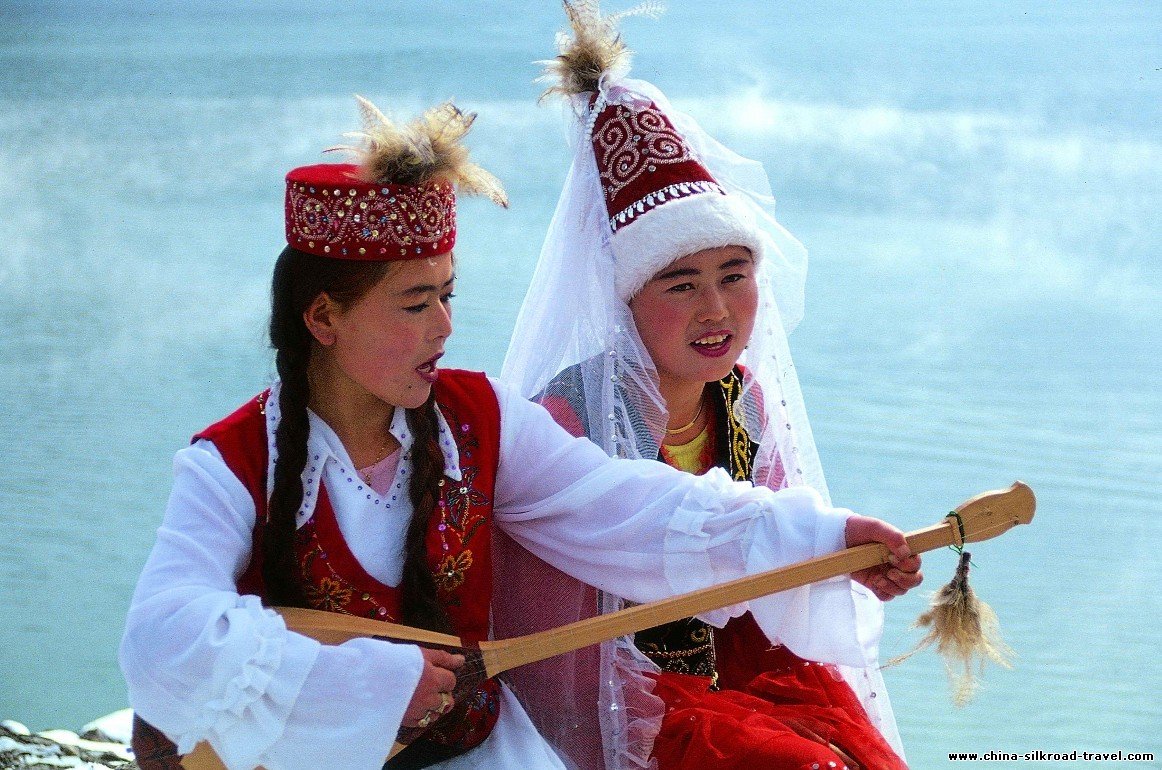 "Pomegranate Blossom" is a Uygur love song. It is about a young man who longs for his beloved girlfriend whom he describes as beautiful and soft as a flower blossom. The Tatars are another ethnic group in Xinjiang. The word "Tatar" used to refer to several powerful tribes in northern China about 1,100 years ago. The group has rich cultural traditions. Their music has lively rhythms, and their dances are cheerful. In the Tatar dance, men perform many leg movements, such as squatting, kicking and leaping, while women move their arms and waists. Tatars are known for their touching ballad songs.
"Old Man's Song" is an ancient folk song that describes an old man's sweet memories of the good old days and what he misses about his life when he was young and strong. The Uzbeks are another ethnic group in Xinjiang. Uzbeks can be found all over the region. Their lifestyles have had a strong influence on other ethnic groups such as the Uygurs and Kazakhs. But their traditional musical style has remained unchanged.Their marriage traditions have remained the same as well, as present-day Uzbeks continue to follow traditional marriage customs.
A marriage is achieved in three necessary steps: the marriage proposal, the exchan
ge of betrothal gifts and the wedding ceremony. The first two steps are similar to those of other ethnic groups in Xinjiang. But Uzbek wedding ceremonies are unique. Before a wedding ceremony begins, the bride and groom's parents sit together with the matchmaker to negotiate "divorce compensation." The compensation refers to the amount of money the husband should pay his wife if he seeks a divorce after they marry. For Uzbeks, divorce is something shameful, while a happy marriage is considered the pride of both families.
"The Girl with Dark Eyebrows" is a traditional Uzbek folk song. It is a love song, but unlike most other love songs that are affectionate and sensual, this one is lively and full of humor. It depicts the witty conversation between a young couple with quickly changing rhythms and humorous words. It's played to the accompaniment of the "rewap," a unique plucked Uzbek instrument.  The Kazakhs are one of the largest ethnic groups in Xinjiang with a population surpassing one million. They mainly live in the Ili Kazakh Autonomous Prefecture in northern Xinjiang.
Kazakh music and dance have their own unique features and are popular throughout China. Music is an important part of their way of life. During summer nights, Kazakhs often get together to party. They stay out during the entire night, singing and dancing. Their most popular musical instrument is the "donbra," a plucked two-stringed instrument popular in central Asia.
"Lark, Amazing Singer" is a well-known Kazakh song. It praises the beautiful singing of a lark, a bird that is beloved by Xinjiang residents. The song depicts people's passion for life and their homeland.
Xinjiang Travel
Xinjiang Guide
China Tours
Silk Road Travel Guide
Travel Advisor