Post Time:2020-01-16 Views:
Xinjiang is the homeland of unique cultural highlights and one the most exciting places in Asia, it covers a vast area with vast natural resources. On this vast land, there are many snow mountains, glaciers, desert, Gobi, Lakes and Rivers, travel around Xinjiang, you will experience a unique and stupendous trip.
Urumqi foremerly known as ‘Dihua’, it located at the northern foot of the eastern section of the Tianshan Mountains and on the southeastern edge of Jungger Basin. Every Mid-May to Mid-November is the best time to travel to Urumqi.
Urumqi is one of the largest cities in north west of China. In addition it is an important stop along the Silk Road leading to Europe.
As the saying goes, ‘ If you don't go to Erdaoqiao Xinjiang International Grand Bazaar in Urumqi, you don't really come to Xinjiang’. The International Grand Bazaar is located in Tianshan District of Urumqi City, it is the largest Bazaar in the world by scale, combining Islamic culture, architecture, ethnic commerce, tourism and entertainment. It is also one of the most famous landmarks in Xinjiang.
The architectural style of International Grand Bazaar is quite magnificent, there are wide range of ethnic minority characteristic commodities in the market, which are rich and exquisite. The whole international Grand Bazaar is the most ethnic place in Urumqi.
If you would like to know the history of Xinjiang, we will suggest you to visit the Regional Museum, Xinjiang museum is located at No.132 Xibei Road, it was built in 1953. with a total ground area of 41,000 square meters and exhibiting area of 7800 square metres, the museum is the main institution to collect and investigate the unearthed cultural relics and specimens in Xinjiang. The main exhibitions on display include ‘ The Exhibition of Historic Cultural Relics in Xinjiang’, ‘A Selection of the Unearthed Cultural Relics in Xinjiang’, ‘The Exhibition of Ancient Mummies in Xinjiang’, ‘The Exhibition of the Customs of the nationalities in Xinjiang’, etc, and various special exhibitions are often held here.
Turpan is an important stop on Silk Road for its fantastic ruins and Buddhism history, it is also the world's richest hypaethral museum of history, culture, nature and Archaeology. Every May to October is the best time to travel to Turpan.
Flaming mountain Scenic Area is about 30 kilometers away from the urban area, it is a red-brown sandstone-dominated Landform Scenic area, historically, it is the seat of the ancient Gaochang Kingdom. In legend, it is the place where Xuanzang and apprentices used palm leaf fan to fan out the flames in the novel ‘The Journey to the West’. In the scenic spot, you can see the magnificent land forms and the historical exhibition of Gaochang, plus the sculpture of the theme of the Journey to the West.
Turpan's Grape Valley is one of the most famous scenic spots in China. Xinjiang folk rhyme said: "Turpan’s grape, Hami’s melon, everyone boasted of the Korla’s pear, and Yecheng’s pomegranate is quite excellent." It points out four famous fruit towns in Xinjiang, and Turpan ranks first in the list, Turpan’s grapes have a great reputation in the world. At the end of April, the grapes will be ripe, In August, there will be more grapes, They are sold all over the street. You can enjoy singing and dancing performance while eating grapes in the grape valley, which is the greatest enjoyment of life.
The Karez Well is a scenic spot with the theme of displaying Karez culture, and it is also one of the well-known scenic spots in Turpan. There are prototypes and museums of Karez Well, as well as Uighur style hotels and restaurants.
Jiaohe Ruins is the capital of the former country of the 36 nation Jushi Division in the Western Regions, it is the most complete urban relic preserved in China for more than 2,000 years, the highest military and political organization in the Western Regions of Tang Dynasty, the site is sandwiched between two rivers and looks like an aircraft carrier. It's a very distinctive scenic spot, the sense of vicissitudes seems to be in the ancient city of Pompeii.
The Kumtag Desert is the only desert in the world connected with cities. The best time to visit the Kumtag desert is from April to October.
When you standing on the top of the Sand Mountain in the desert, and observe the brilliant sunrise and the colourful sunset, you can also experience the magnificent view of ‘ In boundless desert lonely smokes rise straight, Over endless river the sun sinks round’.
Anjihai Grand Canyon, it is also known as Red Mountain Grand Canyon, it is located on the Northern slop of Tianshan Mountain.
Anjihai River is one of the four major river systems in Shawan, upper reaches is Bajian stream, originated from the main peak of the Ilian Habiga Mountain, such as a wild horse flow down in a rushing torrent to a far distance,rushed out of the Grand Canyon near Tungut, thus formed a grand-scale of the Piedmont Alluvial fan under the northern slop of Tianshan Mountains.
Xinjiang Ili is the largest area of lavender grown in China. With the beautiful landscape, vast and sparsely populated, snow mountains under blue sky and white clouds, set off the purple lavender fields, such a magnificent earth, the integration of heaven and earth,which is totally different from the other pastoral farmhouse.
Huocheng county is located in the north west of Xinjiang, the western part of Tianshan Mountain, and the northwest of Yili valley.
Every June, the lavender fields of the Ili Valley, when violet flowers sway like waves in the wind, the refreshing fragrance of flowers in the wind seems to tell the harvesters that it is another year of lavender harvest .
Naraty Grassland is  one of the most attractive grassland in the world. According to Turks, Naraty means the first place to see the sun. The water from the surrounding large rivers provides the meadows to be always fresh in the summer.

In winter, everything in Northern of Xinjiang has turned into a world of ice and snow, a magnificent snowfield, a glittering birch forest haze, a snow-covered ice lake, and you can also experience the wonderful snow bergs such as Tianshan Mountain and Kanas etc.
Kanas is Mongolian, meaning "beautiful, rich and mysterious". It is famous for the beautiful scenery of Kanas Lake and its surrounding snow mountains, grasslands and birch forests. It is known as "Eastern Switzerland, and a paradise for photographer".

In June, mountains are full of flowers, red peony and willow orchids are everywhere. At this time, Kanas is the sea of flowers and the world of flowers.
Colorful wildflowers, together with blue sky and white clouds, snow peaks and clear water, wooden house and jungle, constitute the story of Kanas spring.
September is the best time to enjoy the magnificent autumn landscape in Kanas, and it is also the best time for photography, the high bright blue sky and colourful trees covering all mountains.

Every September, Kanas will turn into a golden fairy tale world. The changeable lakes, Tuva villages far from the disturbing public, I can imagine how many people will be addicted to this beautiful land in northern Xinjiang.
In winter, everything in Kanas has turned into a world of ice and snow, a magnificent snowfield, a glittering birch forest haze, a snow-covered ice lake, a smoky Baihaba and other beautiful views, which have formed the absolute beauty of Kanas. In addition, we can also appreciate the unique folk customs of the Tuva people, who are known as "Forest people" and "tribes in the clouds".

For the vast majority of people, the natural scenery of northern Xinjiang is deeply rooted among the people. However, these scenic spots are only part of the scenery of Xinjiang, while South Xinjiang is a perfect combination of nature and humanity.

Kuqa formerly known as Qiuci, it was an ancient Buddhist kingdom located on the Branch of the Silk Road that ran along northern edge of the Taklamakan Desert in the Tarim Basin and south of Muzat River. The area lies in the present day Aksu Prefecture, Xinjiang, China.
From June to October are the best time to travel to Kuqa. Due to the complexity of the landform, there are obvious regional climate differences.
Kuqa Grand Canyon is composed of reddish-brown mountain groups, natives call it ‘Kizilia’. The canyon runs north to south, it total length of more than 5,000 metres. Is a rare natural wonder in China, which is formed by wind and rain erosion plus torrential flood erosion.
Every June to October is the best time to travel to Kasgar, at this time, the climate is mild, fragrance of melons and fruits, which is quit suitable for sightseeing and vacation. Karakule Lake is also the most beautiful lake in this season, suitable for hiking.
Karakul lake is one of the top 10 largest meteorite pools in the world and an attractive destination for Xinjiang tourism, the lake is famous for its fanciful landscape and clear waters.
Kashgar old city is one of the largest living constructions in the world. The native architecture itself has historical significance and value, which combines the characteristics of Han and Tang Dynasties, The Roman relics and Uyger’s modern life. it is China’s only Islamic culture as the characteristics of maze-style city block.
Idkah Mosque, is the largest mosque in China. The temple gate is built of yellow brick, plaster joint, 4.7 metres high ,4.3 metres wide, the gatehouse is about 17 metres high. A 18-metre high minaret was erected on each side of the gate tower, and there was a crescent on the top of the tower. Annual Corban Festival, is attended by Muslims from all parts of the county and local worshipper can reach 20,000 to 30,000.
Khunjerab Pass is the highest port in the world, where there is a boundary marker of China. In addition, during the two major Islamic festivals, Eid al-Fitr and the Corban Festival (10 December), there will be a grand pilgrimage at the Idkah Mosque, when thousands of Muslims will gather in the square outside the mosque to worship and hold a series of celebrations.
Autumn is the ripening season of melons and fruits, in every August and September, there will be a "Korla Bergamot Pear Festival", which is the best time to visit Korla. while if you would like to enjoy the swans in Swan Lake and the traditional activities of Xinjiang Minorities in Bayinbrook Grassland, you'd better come to Korla in April and July.
Every year around April, the swans, gooses and other rare birds will fly back from the south to multiply and thrive. In the sunlight, swans, lakes, mountains, clouds and shadows merge into a very spectacular scene, Bird-watching terraces are built for visitors to climb and watch birds.
Every July, the annual Nadam Fair will hold in Bayinbuluk. Thousands of people will gather here to hold the different activities such as singing and dancing, wrestling, horse racing and archery etc. 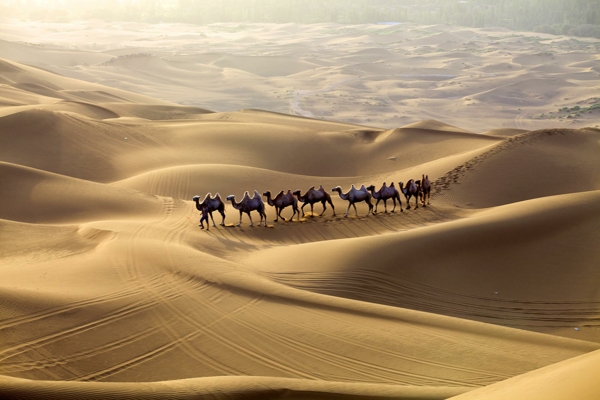 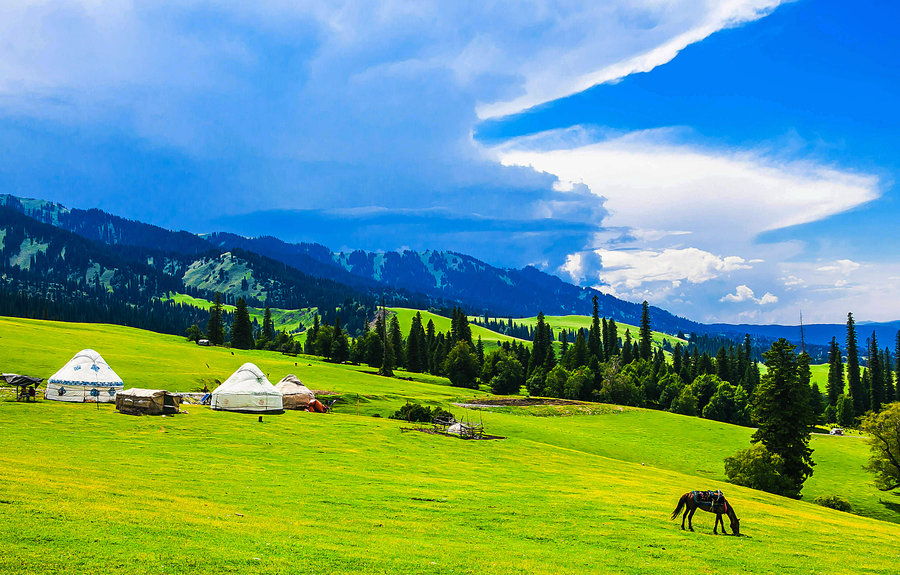 About the author - Shannon

“Travel is the way of life, everytime is a new fresh start”, i always believe a person can know himself better during travelling. No matter explore the nature, admire the art masterpiece or just wandering alone the foreign streets, sometimes we just need to escape. Bring your dreamy destinations, with us, your passion will be turned perfectly into the reality.