The Development of Silk Road

The Han dynasty Silk Road (25-200) starts from Chang’an and divides into two route after passing the Hexi Corridor. The southern route goes westwards form the Yangguguan Pass located in the southwest of Dunhuang. It then follows the northern foot of the Kunlun Mountain, passing through Khotan, Shache and Puli (present-day Tashkurgan), crossing the Congling Ridges and reaches Dayuezhi. Further westwards the route reaches Anxi (present-day Iran) and Daqin(ancient Roman Empire) at Mediterranean; alternatively the route process southward form Dayuezhi to reach Shendu(ancient India). The northern route goes westwards from the Yumenguan pass located northwest of Dunhuang. Passing the former Cheshi Kingdom(present-day Turpan), it goes westwards along the southern foot of the Tianshan Mountain and reaches Dayuan after passing though the kingdom of Yanqi and Shule. 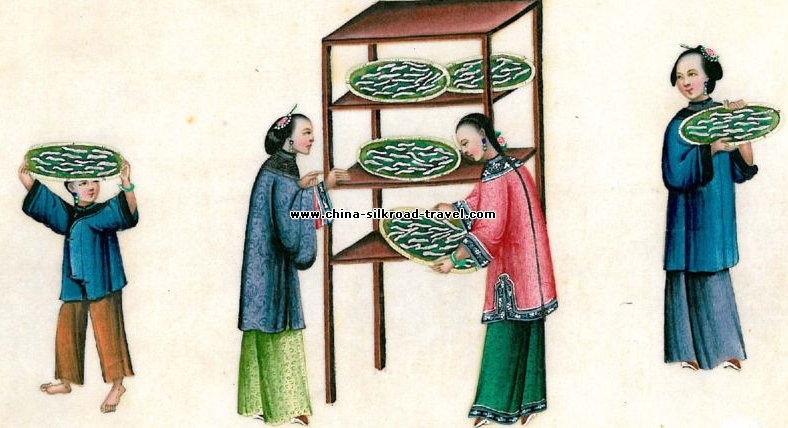 Silk Road enjoyed new development during the Three Kingdoms Period(220-280). It not only continued its extension west of the Congling Plateau, but also opened a new route along the northern foot of the Tianshan Mountain, thus increasing the Silk Road routes to three. During the Wei, Jin and Southern and Northern Dynasty periods(220-589), due to China’s long term division, the administration’s capacity in managing the Western Regions and operating the Silk Road was adversely affected. Fortunately the Silk Road was not interrupted during this period. Some aspects of the road even showed signs of prosperity. In particular, the eastwards dissemination Buddhism brought a large number of monks from India and central Asia to China, bring vigor and vitality to Chinese Buddhism and culture. The most famous was the master monk Kumarajiva(344-413). At the same time, Chinese Buddhist monks and scholars also traveled to the western Rgions to seek Buddhist Dharma. For instance in 399, monk Faxian traveled to ancient Indian via the Silk Road. In addition frequent wars and chaos inflicted upon the Central Plains area forced many Han Chinese to flee westwards along the Silk Road to avoid the fighting. This also accelerated the dissemination of Chinese culture to western Region.
The Sui and Tang Dynasty Period(581-907) witness the development and prosperity of socio-economy and culture after the termination of a long period of disunity. National strength was unprecedentedly powerful. The imperial court made the strengthening of contact and exchanges with western region countries and maintaining the smooth flow of the Silk Road one of the essential national policies. Emperor Yang of Sui Dynasty pursued a policy featured by conscientious operation of the Silk Road and close ties with countries in the Western Regions. In the 4th year of the Zhengguan Period(630) of Emperor Taizong’s region in the Tang Dynasty, Tang army defeated the eastern Turks regime that occupied part of the Silk Road formerly and strengthened friendly ties with Western Turks. Later the Tang army wiped out other separatist forces such as the Gaochang, Yanqi and Qiuci. In the 14th year of the Zhenguan period(640), the imperial court of the Tang Dynasty set up a military administration in the Western Regions to strengthen its governance of the western frontier and to ensure smooth operation and prosperity of the Silk Road. Shortly after, the Tang Dynasty government unified the Mobei region, hence strengthened the links between the Mobei region and the Central Plains, and opened up a communication channel between the western region and the northern frontier. At that time, in a addition to the trunk route, many sub-route of the Silk Road were also opened. This had further facilitated the north-south traffic. In the 3rd year of the Zhengguan Period(629) when Xuanzang, a master monk of the Tang Dynasty, traveled to ancient India to look for Buddhist Dharma, he passed through Gaochang, Yanqi, and Qiuci areas, which were all part of the Silk Road. He then crossed the Tianshan Mountain and entered the Indian subcontinent, an evidence of the existence of sub-routes of the Silk Road.

Silk weaving technology was greatly improved during the Tang Dynasty (618-907)with many varieties of silk products with fancy designs produced. Among them silk brocades with birds and flowers patterns were not only harmoniously laid out, but also had dazzling colors, representing the highest level of brocade production technology. Persian and Arab traders often shipped large quantities of Chinese silk to the Westerns Regions. The then Eastern Roman Empire was the largest importer of Chinese silk.
The Silk Road flourished in early year of Tang Dynasty when it entered a golden period of development. Yet by mid-Tang, with the increase of sea routes, more and more western merchants came to China by the sea way. Silk Road showed signs of decline. In the 14th year of the Tianbao Period(755) local military and administrative official An Lushan launched an armed rebellion.
The Tang army stationed on the four western frontier towns was called back to Chang’an to safeguard the capital. Taking this opportunity of unguarded northwest frontier, Tibetan troops in the south occupied the Helong area, and the Uygur in the north controlled the Altai area. By then the Tang Dynasty government lost control of western Regions. For the time being the Silk Road was “interrupted and inaccessible”.