The Legend of Ban Chao

Ban Chao(32-102),a native of Pingling in Fufeng(present-day northeast Xianyang , Shan’xi),was the youngest son of the Eastern Han historian Ban Biao.His elder brother Ban Gu and his younger sister Ban Zhao were also famous historians.Ban Chao was a bright child with great ambition.His extensive reading equipped him with knowledge and wisdom. In 62A.D.31-years-old man Ban Chao came to the capital city of Luoyang together with his mother and his elder brother.Coming from a poor family,Ban Chao took up a job as a transcriber of documents for government office for a living.One day Ban Chao learned that Huns had invaded the Han border.He threw away the writing brush and vowed to emulate Zhang Qian and Fu Jiezi of the Western Han Dynasty to make contribution to safeguarding the frontier in Western Regions,and eventually win recognition for his meritorious deeds and be awards officialdom by the imperial court.He said “as a real man,how can i stay with the ink-stone and the brush forever?” His transcriber colleagues laughed at his bluster.Ban Chao retorted:”How can a brat understand what a warrior thinks?” As expected Ban Chao was later dispatched n mission the Western Regions where he rendered meritorious services.In the ensuing thirty years,Ban Chao convinced morn than fifth countries in the Western Regions to submit to the rule of Han Dynasty,realizing his lofty ideal of servucing the country in an alien land.In 100,the 69-year-old Ban Chao wrote to Emperor He requesting his approval of hos returning to Luoyang where his roots were.In his letter there were two touching lines:”I dare not dream about coming to Jiuquan County,I’d be gratified if I could enter Yumenguan Pass alive.” In August of the 14th year of Yongyuan Period of Emperor He(102) Ban Chao got the permission to return Luoyang.One month later he was sick from overwork and passed away at the aga of seventy-one. 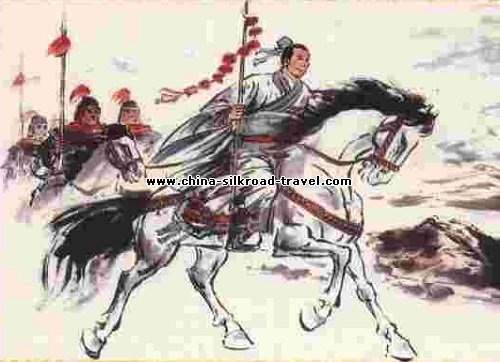