Home > China Tours > Silk Road Group Tours >
Summary: Take the Great Silk Road to China, Kyrgyzstan and Uzbekistan.Tracing the history of the opening,the development and the evolution of the Land Silk Road.Enjoy the Silk Road Cultures along the elegance of the major towns along.Colorful folklore and art,amazing landscape are also attractive.Our package is based on 4star(comfortable class) hotel and 6persons booking one time enjoy 5% discount.

International flight on your own arrangement. Upon arrival, your guide and driver will pick you up from the airport and bring you to check in your hotel. Have a good rest.
Meals: No,
Accommodation: In Xi’an Grand Dynasty Culture Hotel 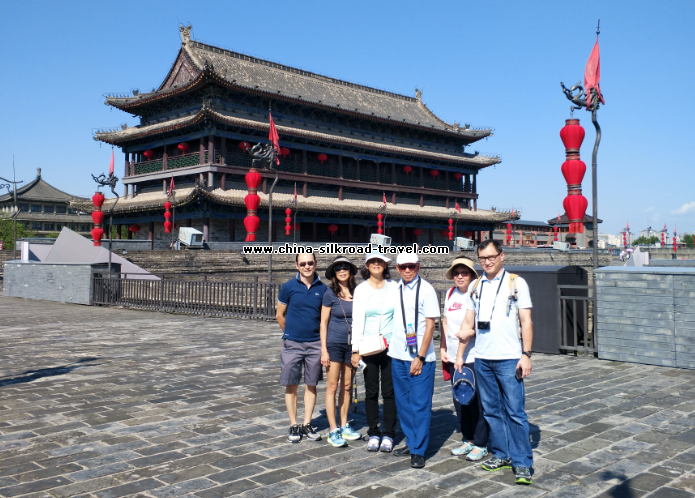 Morning you will take the flight to Xi’an, upon arrival, you will be picked up and transferred to your hotel. Then visit the Shaanxi Province Museum, stroll on the Ancient City Wall, and you have opportunity to cycle on this ancient wall,and then explore the Muslim street and the Old Mosque
Meals: Breakfast,
Accommodation: In Xi’an Grand Dynasty Culture Hotel 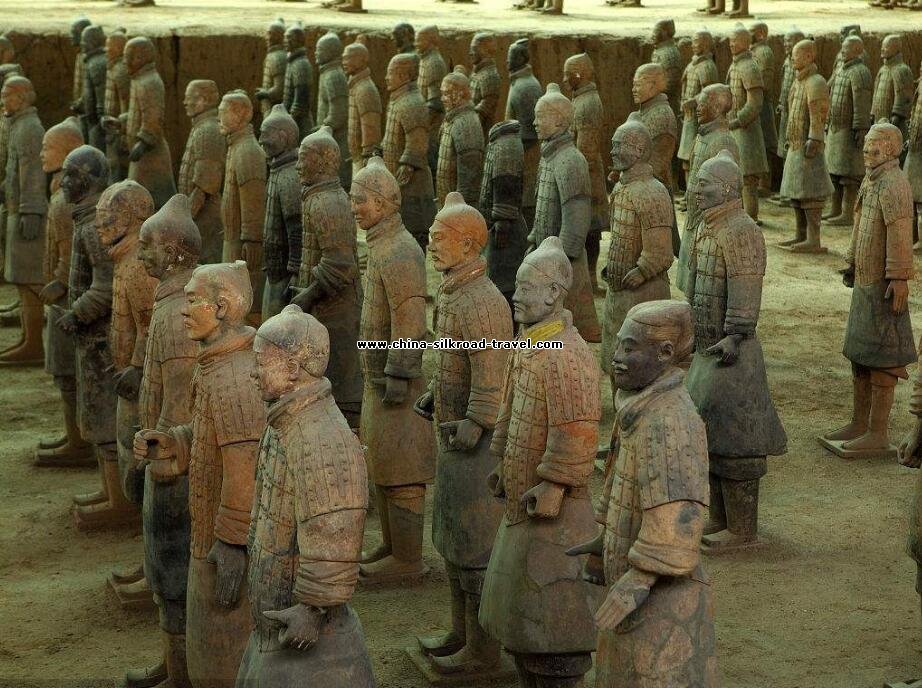 Morning visit the historical significance of the amazing Terracotta Warriors and Horses -which is 7000 individually crafted clay soldiers stand on guard. Then continue to the Bid Wild Goose Pagoda built to house Buddhist scriptures collected by a Chinese Monk, where you can see variety of Buddha statues.
Meals: Breakfast
Accommodation: In Xi’an Grand Dynasty Culture Hotel 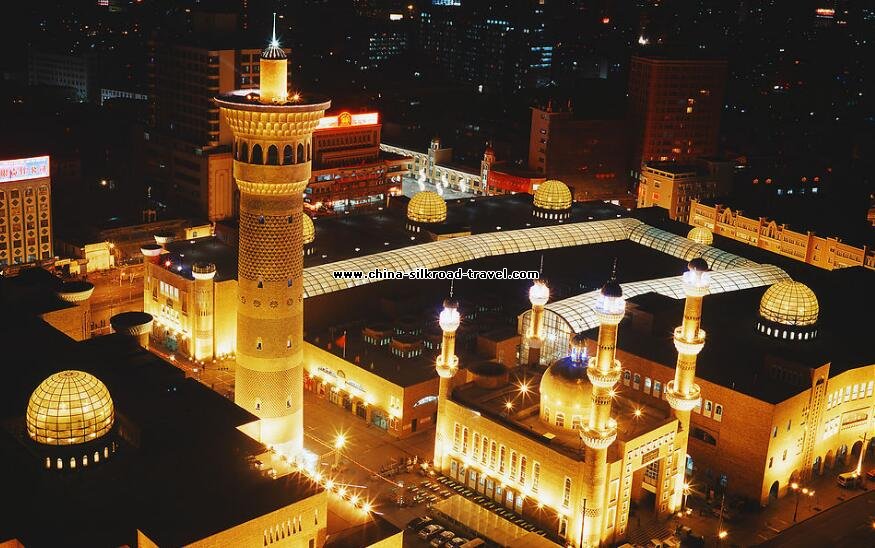 Breakfast at the hotel, then you will be transferred to the airport to catch your flight to Urumqi. And then you will be picked up and transferred to the hotel. later today,  we will visit Xinjiang International Bazaar, the largest bazaar in Urumqi. You'll find a bustling market filled with fruit, clothing, crafts, knives, carpets and almost anything that you can imagine.
Meals: Breakfast
Accommodation: In Urumqi Yilite Hotel 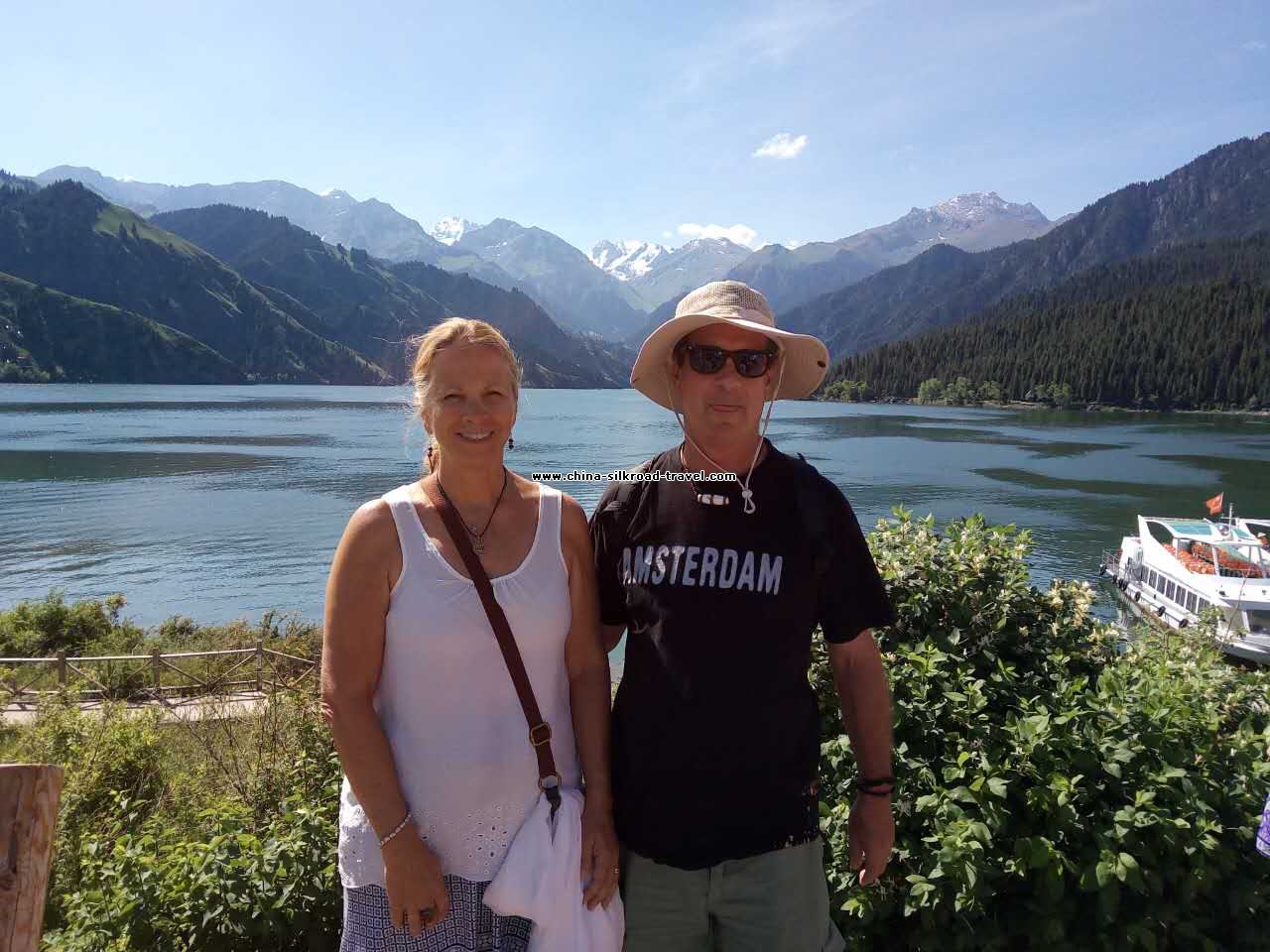 Morning your guide and driver will take you a tour at the Xinjiang regional museum to see archaeological treasures from the Silk Road and Xinjiang's minority cultures. Then driving to Fukang and visit the Heavenly Lake, a picturesque Alpine lake, 2000m up in the Tianshan mountain range. Heavenly Lake is a long and narrow gourd-shaped moraine lake, 3400 meters long, about 1500 meters wide, 105 meters at the deepest point, with an average depth of 40 meters, covering an area of about 5.9 square kilometers. There are eight beautiful scenic spots in the lake scenic area.
Meals: Breakfast
Accommodation: In Urumqi Yilite Hotel 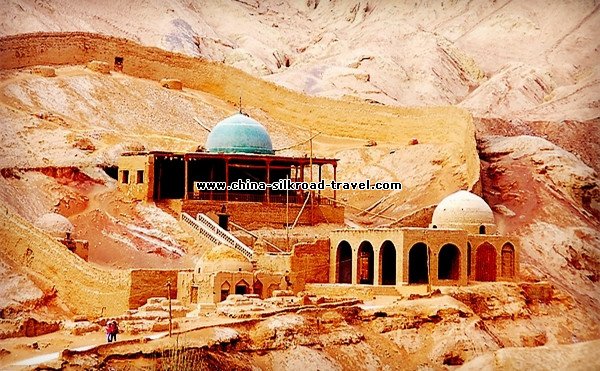 Morning drive to Turpan and have a Full day sightseeing. Firstly, we will visit Tuyoq Village, constructed in eastern and western cliffs in Tuyoq valley. With more than 40 caves, there are 10 preserving murals. Tour to the Bezeklik Thousand Buddha Caves , is a complex of Buddhist cave grottos dating from the 5th to 14th century between the cities of Turpan and Shanshan (Loulan) at the north-east of the Taklamakan Desert in the Mutou Valley, a gorge in the Flaming Mountains, China. Then head to visit the Flaming Mountains - lying in the Turpan Basin, on the northeastern rim of the Taklamakan Desert, is like a red dragon if viewed from afar. This is the largest, driest and hottest desert in China. Astana Tombs, which are the graveyard of the residents lived in the Gaochang City in the Jin-Tang times. Known as “the Underground Museum.
Meals: Breakfast
Accommodation: In Turpan Huozhou Hotel 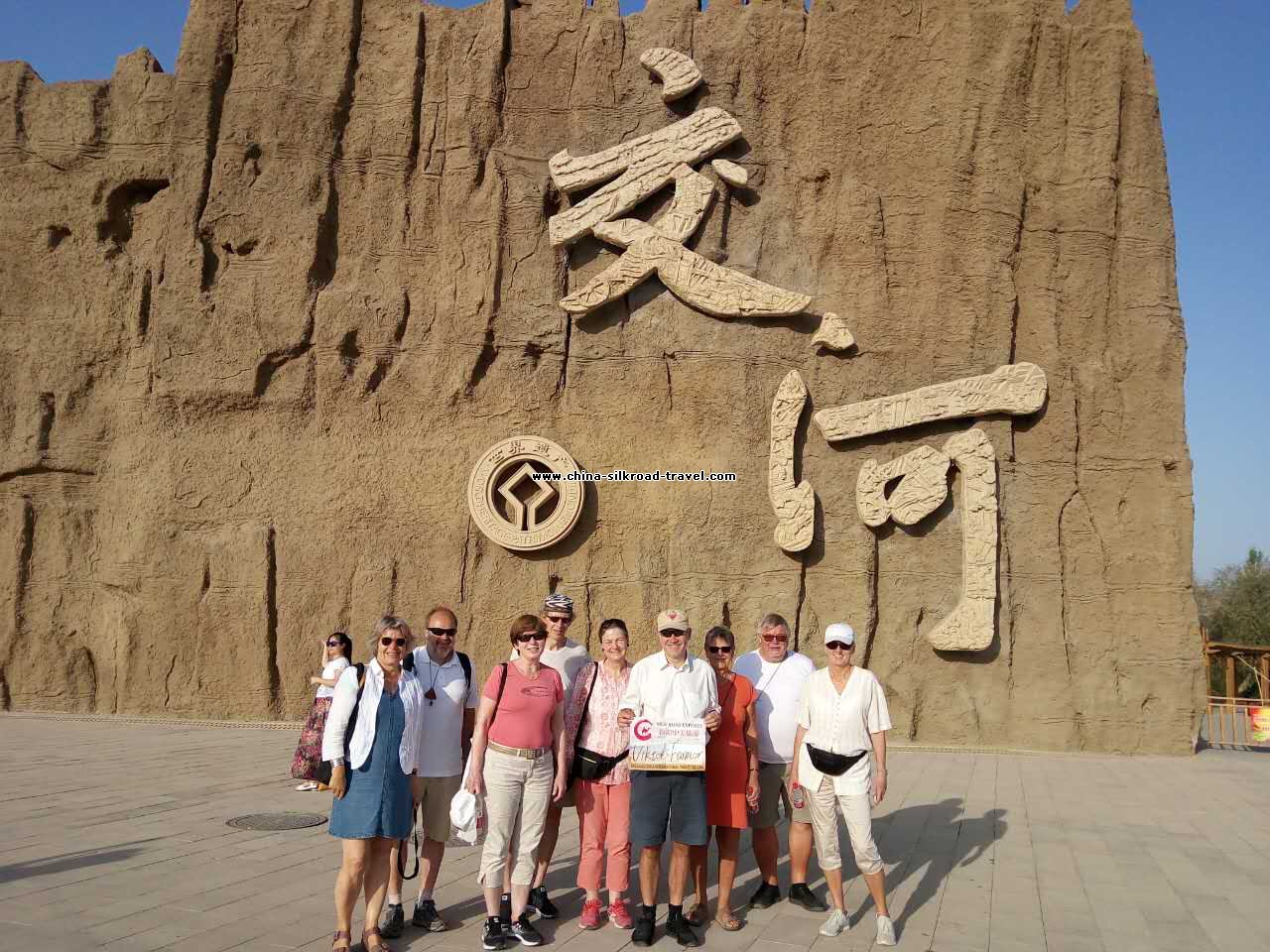 After breakfast, visit the Sugong Minaret, the largest Islamic minaret in China built in 1778. Karez Well, which is a special irrigation system in desert areas. And Jiaohe Ruins—with a history of 2,300 years lies between two rivers on a loess plateau atop a cliff of over 30m. It is one of the best preserved ruins of its ancient era in China, it was include in the World Heritage List on June 22, 2014. then transfer to the train station and take the soft sleeper train to Kashgar.
Meals: Breakfast
Accommodation:  Soft sleeper train 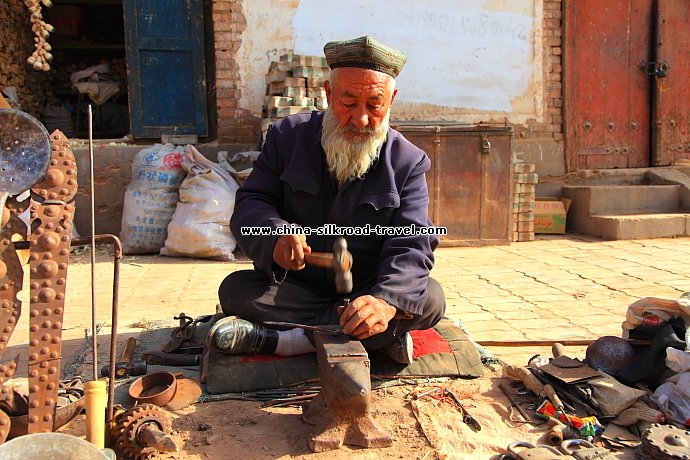 Morning Visit the Idigar Mosque, It is the largest Mosque in China and most famous one in Xinjiang. Afterwards, your guide and driver will take you to visit the Handicraft street, it gathered hundreds of handicraft workshops, which has become a boutique exhibition for handicraft in Kashgar and Central Asia. Then visit the Old Town, to explore the special culture and life way of local people in Kashgar.
Meals: Breakfast
Accommodation: In Kashgar Qinbag Hotel 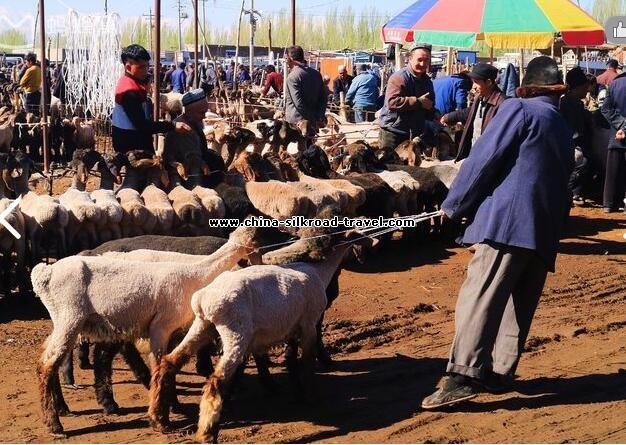 tour at the Sunday Bazaar (livestock Market) with farmers and buyers arriving by donkey cart, truck, bicycle, horseback, motorbike or on foot, with their animals. It's loud, lively and cheerful as they arrive, eat breakfast, set up their animals and check out the action. Then we’ll visit the Apak Hoja Tomb, which is the holiest place in Xinjiang and an architectural treasure.
Meals: Breakfast
Accommodation: In Kashgar Qinbag Hotel 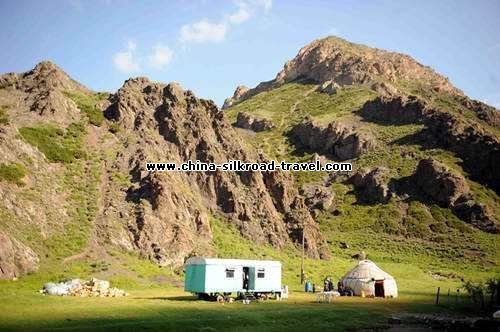 After breakfast drive across the Torgart border and meet your Kyrgyzstan guide who will help you with border formalities at the Kyrgyz side.After crossing the border and passing the customs you will be transferred to Tash Rabat Caravanserai to explore this 14th century historical site. Tash Rabat is a carefully restored stone building that once housed on the Great Silk Road. Its date of origin is a complete mystery; however, there is archaeological evidence to suggest that the site was occupied in the 10th century.Then drive to Naryn town, located in Naryn region.Our way goes through amazing landscapes with celestial mountains and vast valleys, fascinating views of snow-capped mountain rangers and awesome gorges with fast mountain rivers, alpine lakes and nomads living in yurts, shepherds driving their flocks of sheep and herds of horses and cows up to the mountains in spring and bring them down to the valleys in autumn… 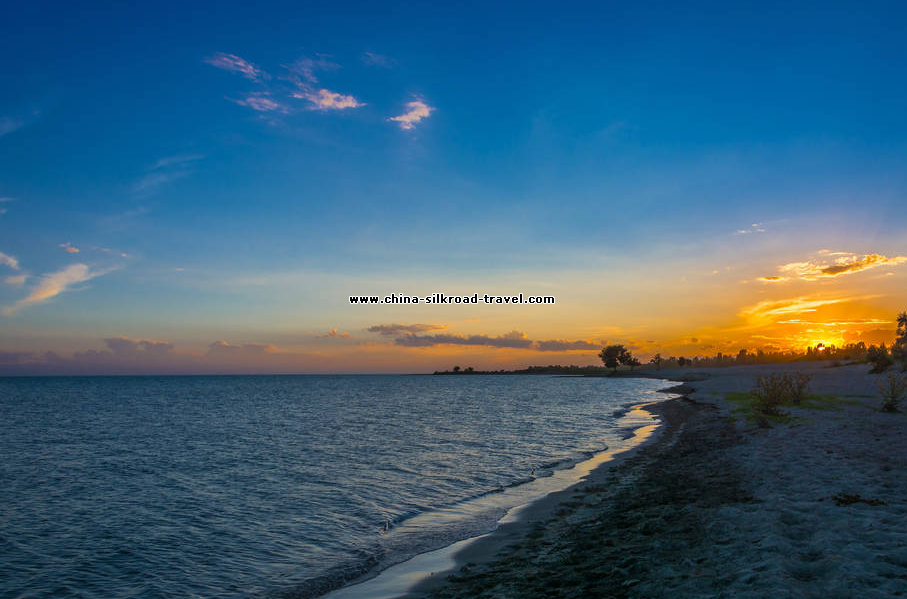 In the morning transfer to Issyk Kul Lake.

Issyk-Kul Lake, the second largest alpine lake in the world after Lake Titicaca in South America. Measuring 182 km long by 58 km wide, the lake appeared as a result of volcanic activity. It is heated from below by thermal activity and never freezes even in the depths of winter. In the summer the water temperature reaches 25-28 degrees centigrade (warmer than the air) and you can swim in the lake enclosed on all sides by the snowy peaks of the Tien Shan Mountains. Extremely deep and nicely warm over the centuries the lake has been something of an oasis in this inhospitable mountain environment. With diverse flora and fauna Issyk-Kul Lake and the surrounding environments are rightly considered to be one of Central Asia most remarkable locations.Lunch en route in Kochkor, where you can watch how local people make felt, various carpets, embroidering and spinning, and other handicraft stuff. We also visit a handicraft museum and a shop, where you can buy different masterpieces – starting from huge felt-silk blankets, finishing with small Christmas tree decorations. 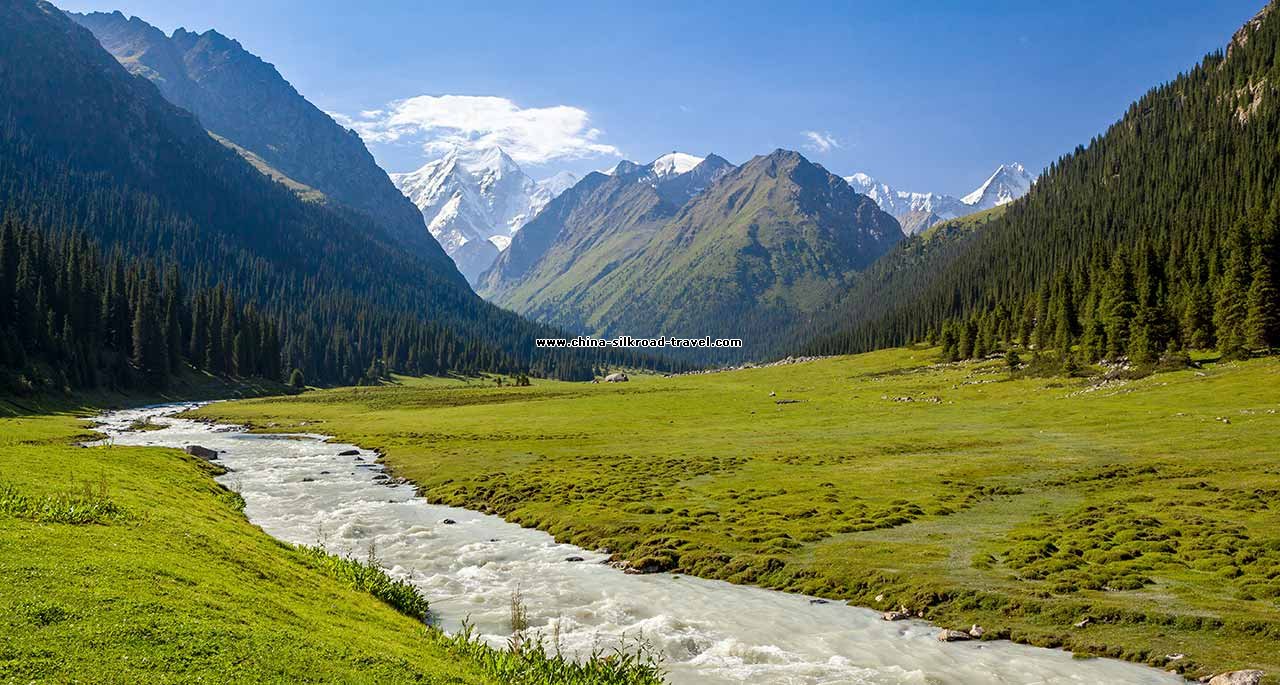 After breakfast at Cholpon Ata we drive Chon Kemin valley. Upon arrival at Chon Kemin valley accommodation in a guest house.   The valley has a rich variety of vegetation, and animal life, and boasts both a Zoological preserve (with partridges, gold pheasant, hare,wild boar and mountain sheep) and a botanical reserve (Kapchagai — which is home to ephedra — horsetail). The conifer forests which line the mountains which form the sides of the valley are well known throughout the country and are home to many varieties of mushrooms, berries and herbs. Dinner and overnight in the Kyrgyz guesthouse.
Meals: Breakfast
Accommodation: In Chon Kemin Valley 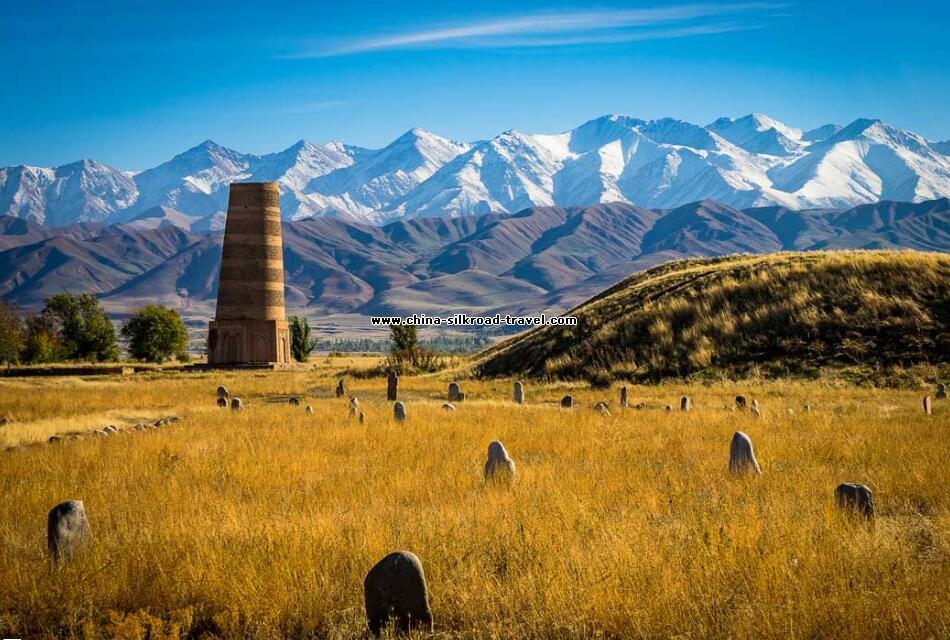 After breakfast at the guest house we continue driving to Bishkek city. Our way to Bishkek goes through Boom Gorge where boisterous Chu River, so much loved by rafters (routes up to 6th category difficulty!), cuts its way, it passes northwards and then enters the wider Chuy valley. The gorge cuts, in a general north-south direction, across one of Tian Shan's mountain range systems. The range east of the gorge is known as Kyungey Ala Too, the one to the west is the Kyrgyz Range.On the way you drive to Burana Tower (old minaret) near Tokmok city. That minaret was constructed in Balasagun town; one of the capitals of Karakhanid State existed in 12 centuries AD. Explore ruins of that important trading point at the Great Silk Road and visit a little local museum telling about that civilization.Take the Bishkek city tour to Ala-Too Square, Duboviy Park (Oak Park), Pobeda Square (Victory Square), National philharmonic and many others places of interest. During this day we will show you our main squares and buildings that were made at Soviet time. In the evening is transfer to airport. 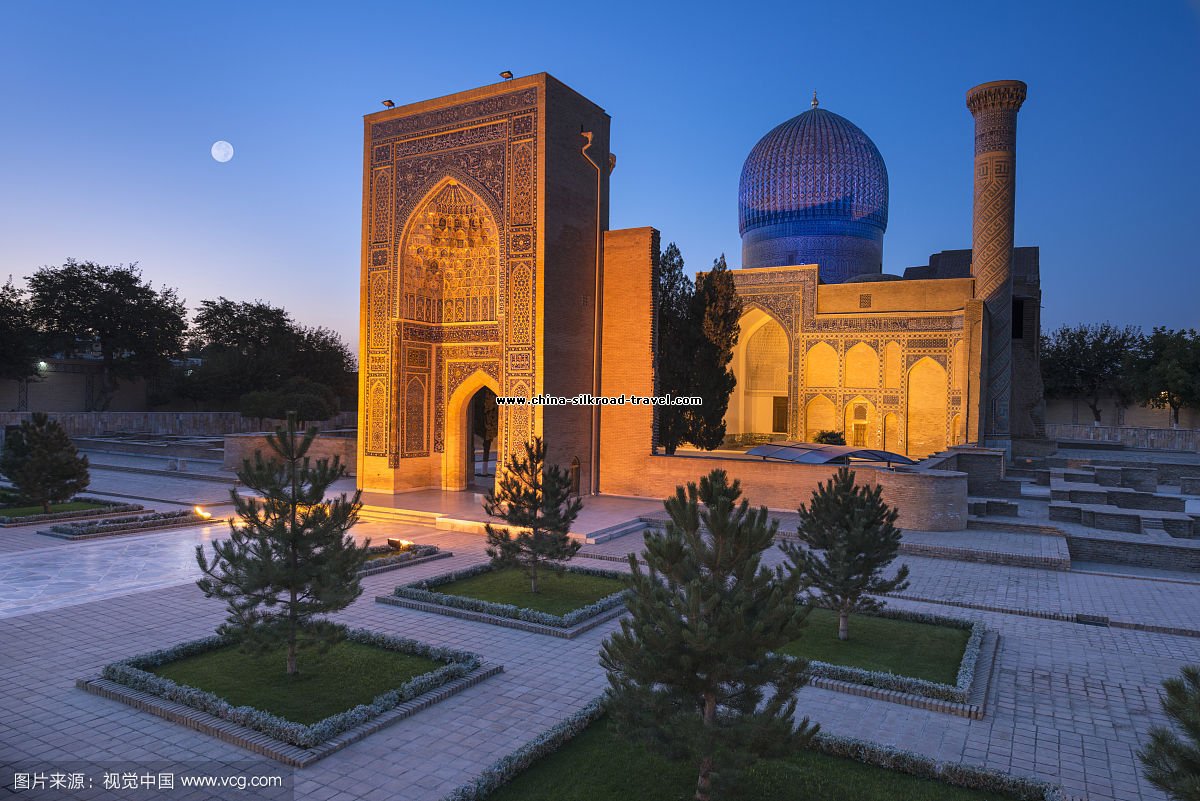 After breakfast be transferred to the train station and take the express train to Samarkand, and your guide will meet you at the train station, then you will take the Samarkand tour.  Visit spectacular Registan Square, remains of Bibi-Khanum Mosque, Siyob Mosque, Ulugbek Observatrym Shakhi-Zinda Necropolis and Gur-Emir Mausoleum authentic shrine of Tamerlane. Shakhi-Zinda Necropolis  It consists of rows of refine sparkling blue colors tombs. Harmoniously combined in a lively and moving composition, various mausoleums are grouped along the narrow medieval streets. Shakhi Zinda consists of eleven mausoleums, which were built one after another in XIV - XV centuries. 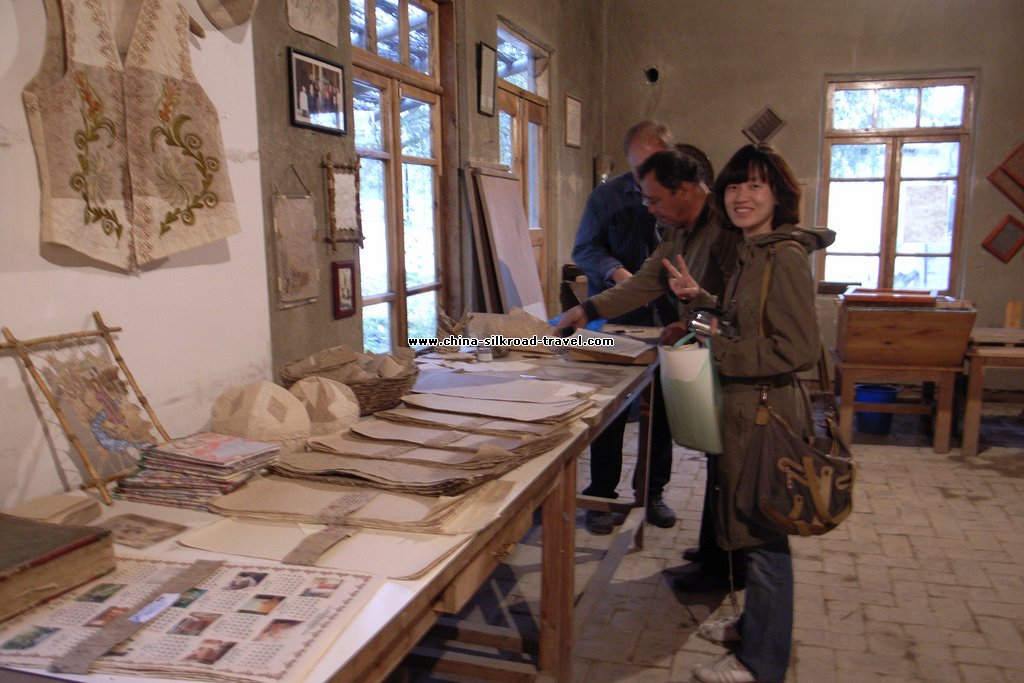 After breakfast, visit Afrasiab Museum and the Tomb of Saint Daniel. Then drive to Konigil village to explore traditional way of making Samarkand paper from mulberry. Enjoy free time with car and driver at your disposal after sightseeing tour. And in the afternoon take the train back to Tashkent and check into the hotel upon arrival. Konigil, a village near Samarkand has the “Meros” paper mill, founded by well-known masters the Mukhtarov brothers. Thanks to their efforts the local factory revived an ancient tradition based on old Samarkand technologies. Interestingly enough but the production is manual and the visitors can watch a papermaking process with their own eyes. 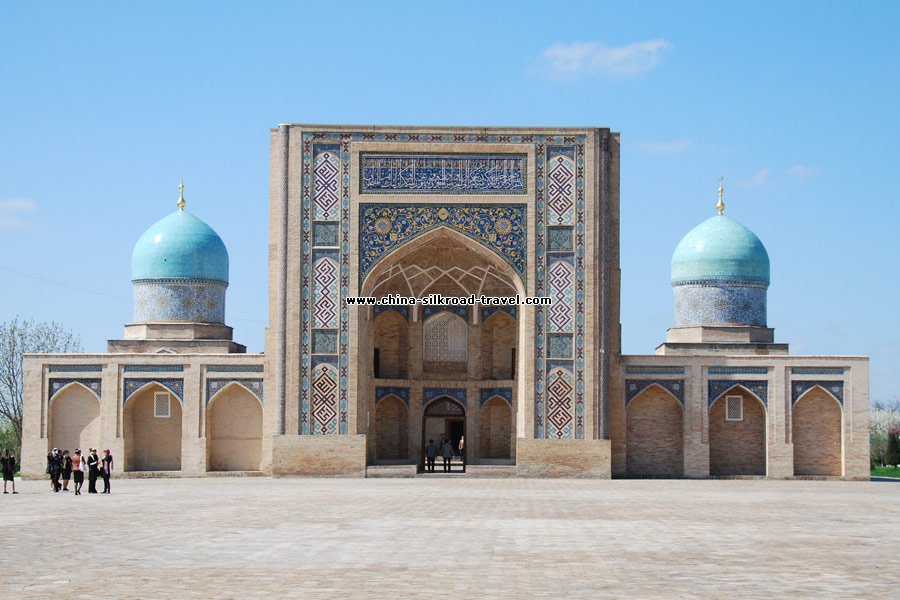 Today you will take the Tashkent city tour which is the largest city in Central Aisa, Visit Old City part of Tashkent with Khast-Imam Complex where the world famous Quran of Caliph Uthman – Ottoman has been preserved. In Khast-Imam visit Madrasah of Barak-Khan, Tillya-Sheykh Mosque, Mausoleum of the Saint Kaffal Shashi and the Islamic Institute of Imam al-Bukhari. Explore Chorsu Bazaar. city center with Amir Timur Square, Independence Square and Applied Arts Museum
Meals: Breakfast
Accommodation: In Tashkent

based on your flight info

√ Private transportation with Good AC
√ 4star Accommodation based on TWN rooms listed with breakfast;
√ Airfare: Xi'an to Urumqi, Bishkek to Tashkent
√ Excellent English speaking guide
√ All sightseeing as specified in the itinerary;
√ 1st class train:  Urumqi to Kashgar
√ 2 bottle of water each person every day
√ Round train Tashkent to Samarkand 2nd Class

× All Airfares; to Xi’an, Leave from Tashkent
× Camera and Video charges during sightseeing; × Personal expenses and optional like boating, camel riding, Tips to the guide and driver
× Full board meals: all the lunches and dinners
× Other lost due to the weather condition