Home > China Tours > Silk Road Group Tours >
Summary: Start the Silk Road Tour in Kashgar, visit the Taxkorgan county which is located in the very west of China. enjoy the amazing Pamir Plateau Landscape tracing the footstep of the businessman of the ancient silk road. visit the Ruins of Jiaohe. visit the UNESCO of Mogao Caves.Experience the Camel riding as Silk Road Carava Come and Join us, we promise you an unforgetable holiday :)

You will arrange for you international flight to Kashgar. Our guide will meet you at the airport, transfer you to your hotel and check you in. You will have the rest of the day free to do a little exploration at your leisure. Tomorrow starts your silk road tour
Meals: No
Accomodation: Tianyuan International Hotel 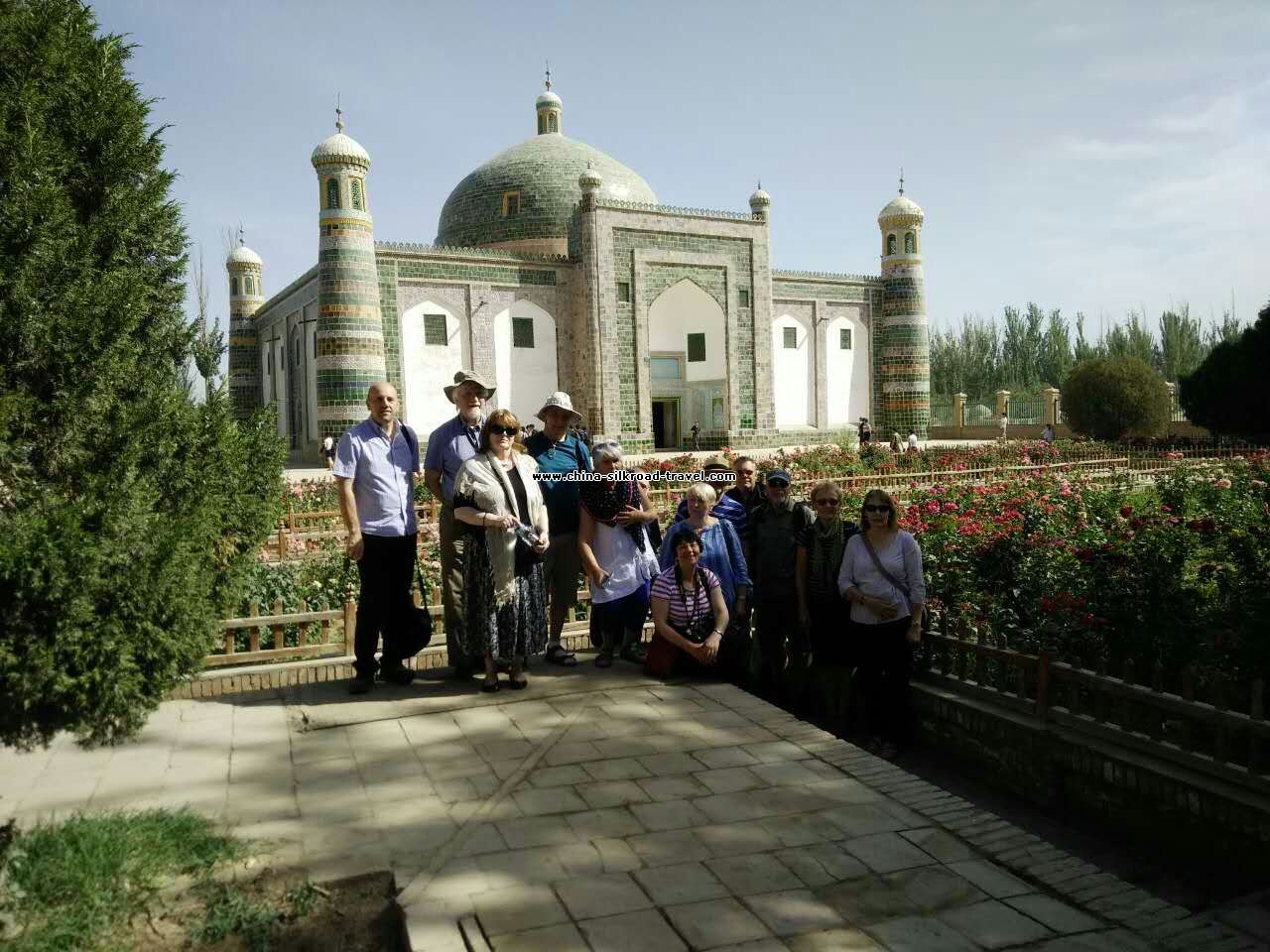 Our UK Group in Apak Hoja

Today is Sunday, you will experience the Sunday Bazaar(Livestock Market) in the morning and visit the Idigar Mosque,Apak Hoja Tomb,Old Town and Handicraft street.
Sunday Bazaar: This is called “Sunday” bazaar but it is open daily, even though it is busiest on Sundays. Streets near this big market are jammed with farmers and buyers arriving by donkey cart, truck, bicycle, horseback, ute, motobike, or on foot, with their animals. It is loud, lively and cheerful as they arrive, eat breakfast, set up their animals and check out the action. Cattle, sheep (they definitely look different), goats, donkeys, horses have their own sections. Sellers show off their animals as “good eaters” (most go as livestock, not meat). The entire experience is fascinating and fun.
Id Kah Mosque: This is the largest mosque in China, and the most famous mosque in Xinjiang. The construction of the mosque started in the middle of the 15th century, and the mosque has gradually developed to its present size. The buildings of Id Kah Mosque look magnificent and solemn, and display the artistic styles of Islamic mosque architecture. The Mosque has an area of about 16,800 square meters, consisting of the Pray Hall, the Koran teaching Hall, the Corridor, the Arches and other buildings attaching to it. The Pray Hall of the mosque, which can hold 4,000 prayers, is supported by 140 carved wooden pillars.
Apakh Hoja Tomb: This Mazar is the holiest place in Xinjiang for the Muslims, and an architectural treasure. Built in 1640, it is reminiscent of the Central Asian artistic style of Samarkand or Isfahan. The site is also known as the Xiang Fei (Fragrant Concubine) Tomb in memory of Abakh Khoja's granddaughter, Iparhan, who was the Fragrant Concubine of Emperor Qianlong of Qing Dynasty. A handsome blue-and-white tiled gate leads into the compound, which includes a small religious school and the Abakh Khoja family tomb. The latter is domed and faced with muti-color tiles. It is the most complete Islamic tomb dating from the beginning of the Qing Dynasty.
Old Town: Kashgar is an ancient city, and in walking the streets of its Old Town, one gets the sense of what this legendary Central Asian hub was like in the days when the Silk Road was at its zenith. 500-year old remnants of the city wall, narrow lanes and colorful multi-ethnic crowds combine to make Kashgar’s historic district a highlight of any visit to the city. Visit the small alleys to look at the characteristic Uygur residences. You will experience and enjoy the culture and history that has been retained in the small alleys and deep courtyards. In the alleys on platforms beside the residence you could marvel at the even more ancient primitive workshops for hand-made earthenware. Some 17 or 18 antique workshops have been restored.
Handicraft Street: Handicraft Street, or Zhiren Street, is a fascinating place showing the distinctive custom and culture of Kashgar, with many full-time handicraftsmen working on the street and hundreds of workshops and booths alongside. This street is an exhibition for traditional Kashgar and mid-Asian handicrafts. Copper, metal, porcelain, woodwork, jewellery and other goods are seen to be made here and you will marvel at the incredible devices like the wooden objects that prevent babies from wetting the bed. 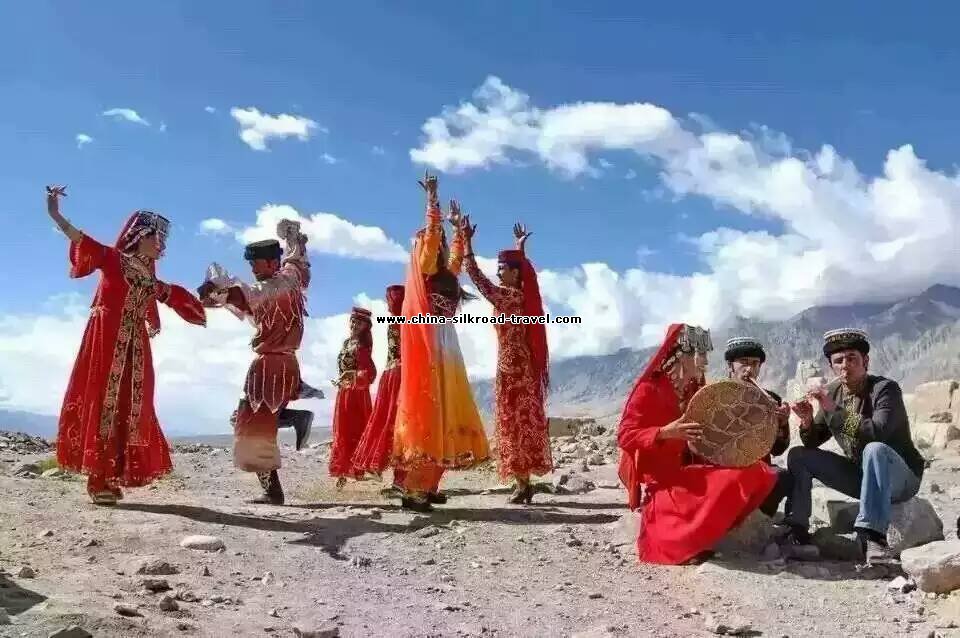 After breakfast, we will head to Tashkorgan county along the Karakom highway. Enjoy the amazing landscape of Pamir Plateau, visit Karakul Lake en route, arrive in Tashkorgan in the late afternoon.
Karakul Lake: At an altitude of 3600m, this is the highest lake of the Pamir plateau, near the junction of Pamir, Tianshan (Heavenly Mountain), and Kunlun Mountain ranges. Surrounded by mountains which remain snow-covered throughout the year, the three highest peaks visible from the lake are the Muztag Ata (7546m), Konur Tagh (7649m) and Kongur Tiube (7530m). The lake is popular among travelers for its beautiful scenery and the clarity of its reflection in the water, whose color ranges from a dark green to azure and light blue. There are two Kirgiz settlements along the shore of Karakul Lake, a number of yurts about 1 km east of the bus drop-off point and a village with stone houses located on the western shores. 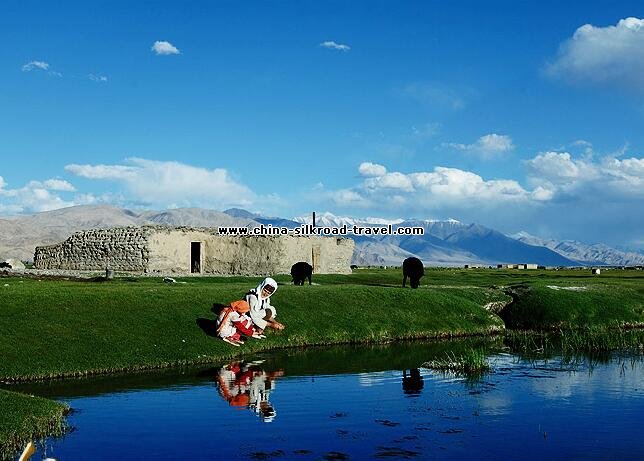 
After breakfast visit Stone Fortress,and walk around the pastureland to see Local Tajiks customs.Afternoon back to Kashgar.
Stone fortress: Located on a tableland northeast of the county seat of Taxkorgan Tajik Autonomous County, it covers an area of 100,000 square meters and consists of ruins of city and temple of the Tang Dynasty era and a Qing Dynasty government office. The temple occupied the eastern part of the city. In the western and southeastern parts are found ruined houses. On the ruins of the temple the Pulitin Office of the Qing Dynasty was built. The city is oval in shape, and the city walls were built with sun-dried bricks on stone foundation. It is 1285 meters in circumference outside. 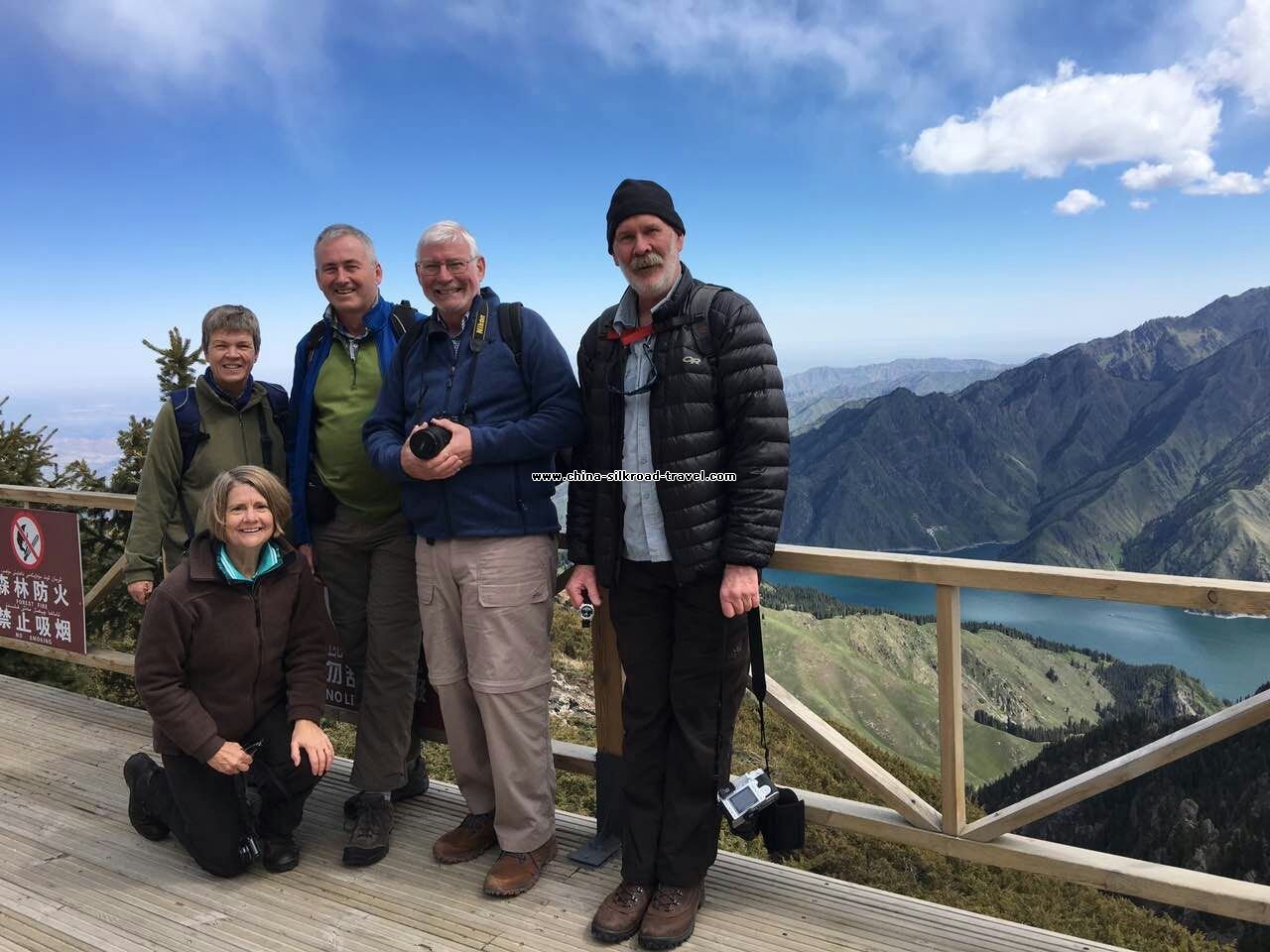 After breakfast you will be transferred to the airport and take the flight to Urumqi and met our guide then drive about 120kms (1.5hrs) to visit the Heavenly Lake which is located in the deep of the Tianshan Mountain Ranges and back to Urumqi to visit Erdaoqiao Market & International Bazaar in the afternoon.
Heavenly Lake,110 kilometers from Urumqi, the Heavenly Lake is a long and narrow gourd-shaped moraine lake, 3400 meters long, about 1500 meters wide, 105 meters at the deepest point, with an average depth of 40 meters, covering an area of about 5.9 square kilometers. There are eight beautiful scenic spots in the lake scenic area, they are “A Ray of Stone Gate”, “Dragon's Pool and Green Moon”, “Magic Needle for Guarding the See”, “Three Stones Bearing the Sky”, “the Snowcapped Southern Mountain”, “Pine Billows in Western Mountain”, “the Hanging Waterfall”, and the “Sea Peak's Sunrise”.
Erdaoqiao & International Bazaar: Here you will find a bustling market filled with fruits, clothing, crafts, knives, carpets, and almost anything that you can imagine. This is the largest bazaar in Urumqi, and is a place most welcomed by tourists, especially the ladies who will find they can buy some traditional Yugur cosmetics. On Sunday, there are more stalls and more goods to buy than any other day. The old streets around the bazaar are particularly worth seeing. 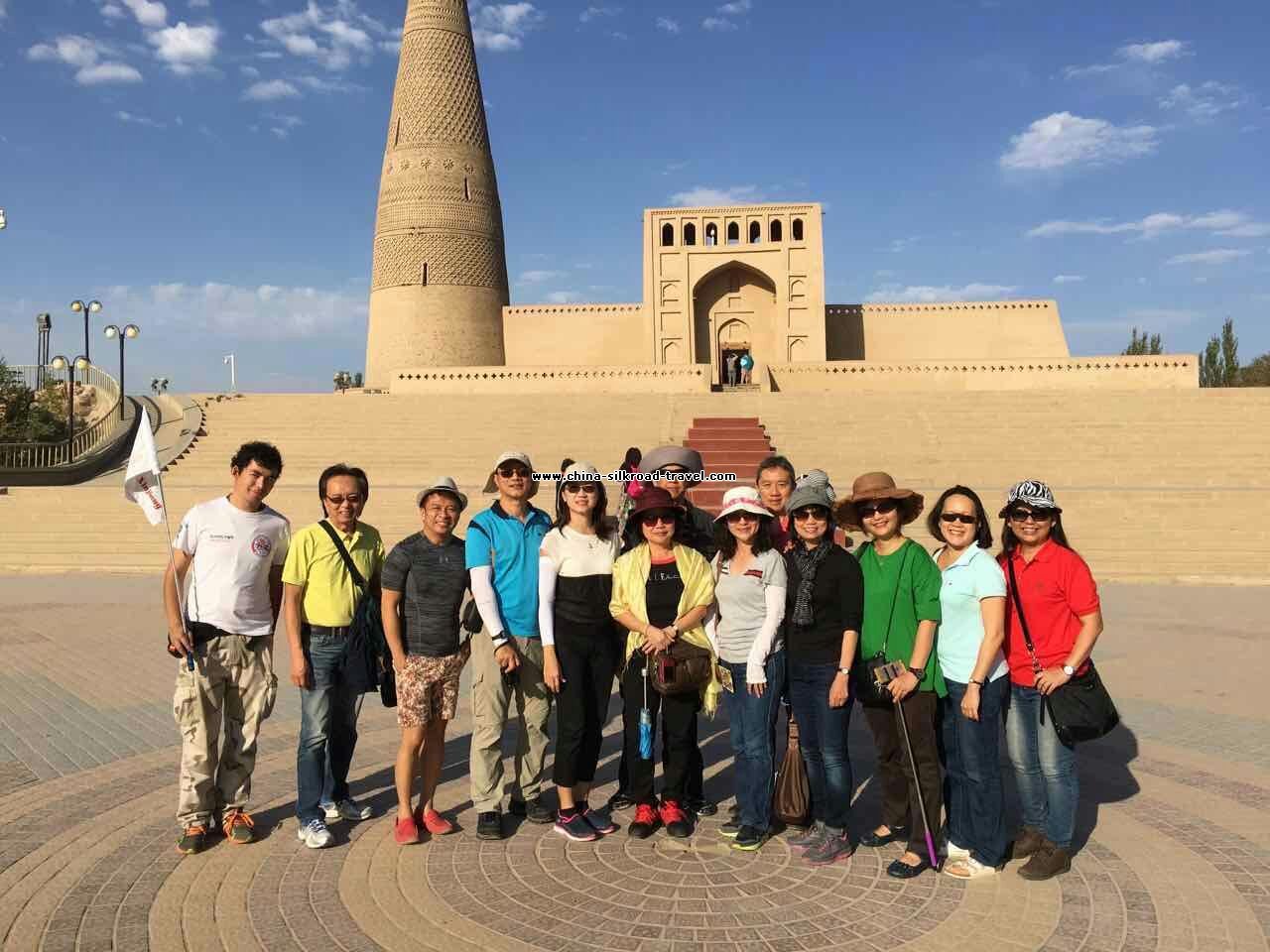 In the morning head to Turpan which is famous for the grapes, hot weather and historical sites,and stop by the largest Wind power station in Asia. Visit the Tuyoq Valley, Karez Well Irrigation system, Sugong Minaret and Jiaohe Ruins. The dinner in the local Uyghur Family recommended.
Jiaohe Ruins is located on a mesa in willow leaf shape between the Yarnaz River valleys 10 kilometers to the west of Turpan City. running from northwest to southeast, 1760 meters long and 300 meters across at the widest part. The city includes city gates, streets and lanes, government office, temples, domestic houses, cave houses, wells, and an underground temple.
Karez Irrigation System,The Karez System is a unique irrigation system in Turpan, which, taking advantage of the slopes, draws the underground water to flow by itself to irrigate farmland. It consists of four parts: vertical wells, underground channels, ground canals and small reservoirs
Sugong Minaret was built in the 41st year during Qianlong period of Qing Dynasty,It is an embodiment of the ancient architectural arts of the Uygur nationality. The tower is 37 meters high and 10 meters in diameter at the base. The body of the tower is cylindroid in shape, built with bricks arranged in various symmetrical patterns.
Tuyoq Valley: This is a 12 km long primitive Uighur agricultural valley about 70 km from Turpan, with vineyards and fields in the northern and southern valleys and a narrow ravine that connects them. It is a Muslim religious pilgrimage site. The southern mouth of the valley has big Uighur mosques older than the Sugong Minaret and a cave thought by many to be described in the Koran. About a kilometer from the cave shrine is a group of grottoes that have some Buddhist and Nestorian artwork. These grottoes are said to date from the West Jin Dynasty (265AD-316AD), and are considered to be the earliest in Turpan. Most of the murals are damaged. Fortunately, 10 of the grottoes still have some of the preserved murals. These precious murals are very unique in style. 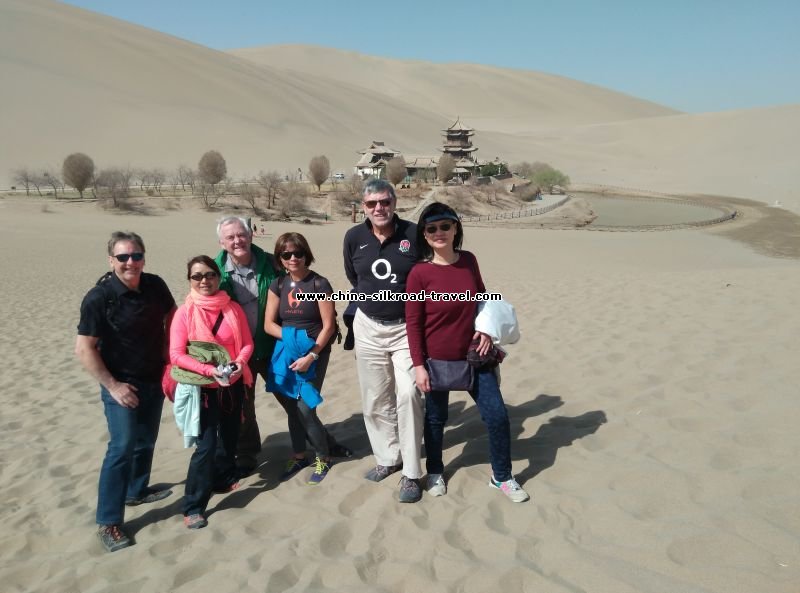 After breakfast take the taxi on your own (8yuan) to the train station and then take the express train to Dunhuang (Liuyuan Station) and met up with our guide, then drive about 2 hrs to Dunhuang, visit the Echoing-Sand Mountain and Crescent Lake,the Echoing-Sand Mountain, for many Chinese well known as Mingsha Mountain, is celebrated for the sound of the moving sand. In 1994 it was acclaimed as the national key scenic spot. Together with the Crescent Springand the Mogao Caves, the Echoing-Sand Mountain is the most popular sitein Dunhuang travel.You may wonder why the sand makes these different sounds. and after dinner enjoy the relaxing walking in the Shazhou Night Market. 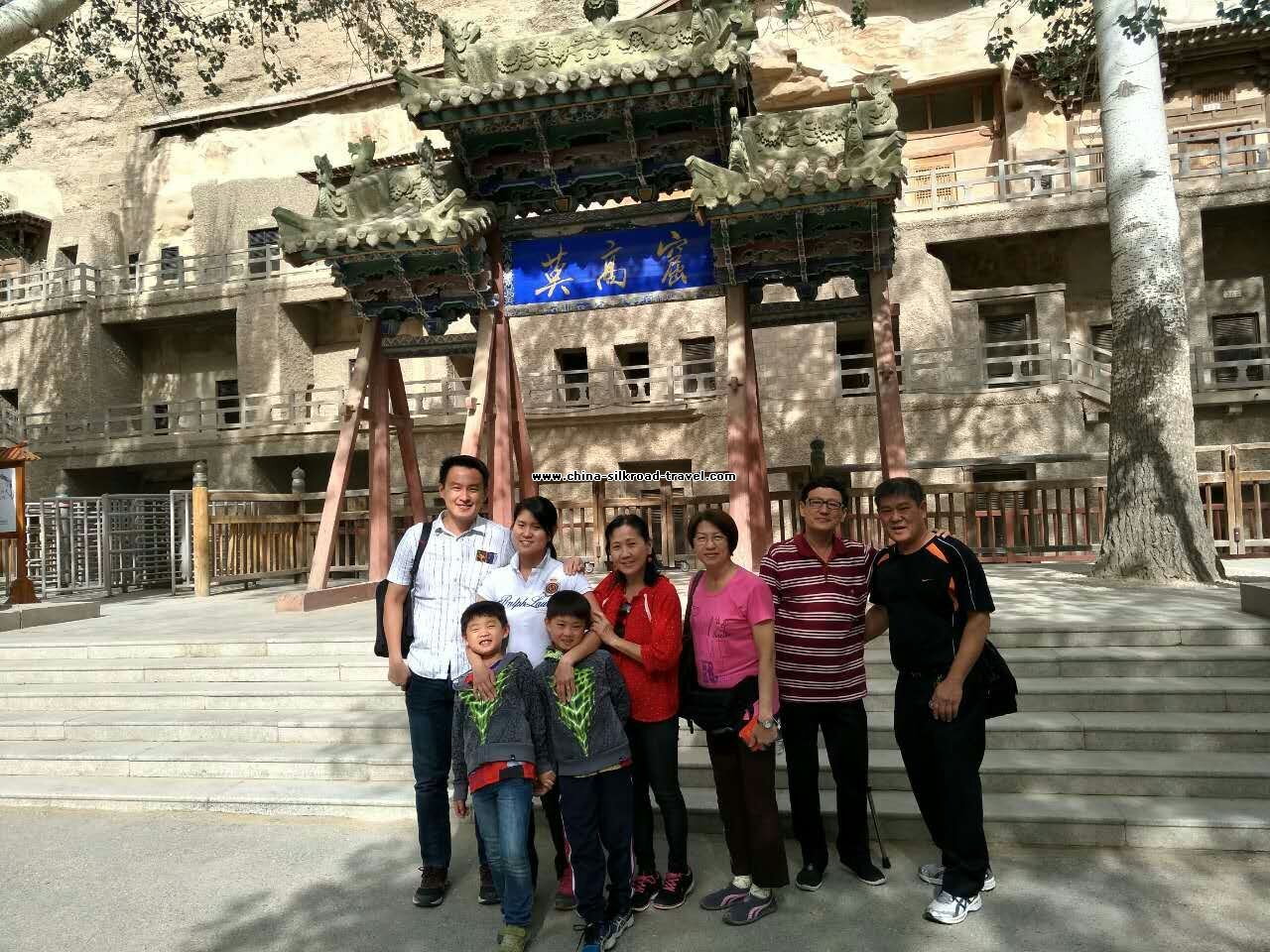 
After breakfast visit Mogao Caves,where you will visit the digital theater that help you have a clear mind of the Mogao in ancient times. After lunch, going to visit Yumen Pass and the Great Wall of Han Dynasty.
Mogao Grottoes:The traveler finds the Mogao Caves, a shrine of Buddhist art treasures, on the eastern slope of Mingsha Shan (Mount Echoing Sand). A network of plank reinforced roads plying north to south 1600 meters (5, 249 feet) long lead to the cave openings, which are stacked five stories high some reaching up to 50 meters (164 feet). By the way, Mogao means high up in the desert. The history of the Great Wall is said to start when seven powerful states appeared at the same time. In order to defend themselves, they all built walls and stationed troops on the borders. At that time, the total length of the wall had already reached 3,107 miles, belongin g to different states.
Meals:  Breakfast, Dinner
Accomodation: Tianrun Hotel


After breakfast you will be transferred to the airport and take the flight back to your destination. you can extend your tour to Beijing/ Shanghai, or continue your silk road tour to Hexi Corridor.

* All Lunches through out the itinerary
* Flight to Kashgar and departure from Dunhuang
* Flight with tax from Kashgar to Urumqi.
* Tips, 8usd/day* 7days
* All the personal expense, activities such as boating, horse riding, camel riding etc