Yumen Pass ( Jade Gate ) or Yumenguan Pass, alias "Xiaofangpanchen" and "Dieliebanjin" in Mongolian, lies about 90km to the northwest of Dunhuang. It was the only way for both Western Land to transport the Khotan Jades from Tarim Basin to the Central Plains. This place was under the jurisdiction of Yumen Pass Douwei (the title of the military officer subtler general 11 ) in the Western Han Dynasty and ever being closed together with the Silk-road before long after Wangmang had seized the scepter. The Silk-road was recovery after Banchao sent to the Western Regions. Unfortunately, during 100-odd years from the Jianwu to Yanguan of the Eastern Hans regime, this Silk-road between the east and west had experienced three times of obstruction and recovery. Yumen Pass, in the Eastern Han Dynasty, was under the domination of Yumen Zhangwei. The Silk-road has declined since the Two Jin and Southern and Northern Dynasties owing to the frequent wars and developed ocean shipping between the east and west afterward, especially in both Sui and Tang Dynasties, the Yiwu thorough-fare to the Western Lands was clear. The Yumenguan Pass moved to Jinchang county in Guazhou (i.e., place nearby the Shuangtabao within Anxi County nowadays). Such original prosperity as to-and-fro trade caravans and envoys did not exist except for desolate and vast Gobi desert and sands. As a result of Wangzhi-Huan signed out in his poem of "Liangzhou Ci": "the chopping and rib and-shaped Yellow River run mountains high, borders on clouds in the distance. How lonely both desolate town and towering mountains are! Complain no green sallows for friends because of the spring breeze being far from Yumen Pass.

Located in the South Bank of Shule River, the westernmost part of the Hexi corridor, Yumen Pass is composed of Gobi, desert, river, and lake beach. It faces the North Mountain in the north, echoes the Qilian Mountain in the south, 90 kilometers away from Dunhuang City in the southeast, and 150 kilometers away from the eastern edge of Lop Nur in the West. This area has the landmark position of the east-west traffic boundary in a geographical area and has been an essential channel of east-west traffic since ancient times. 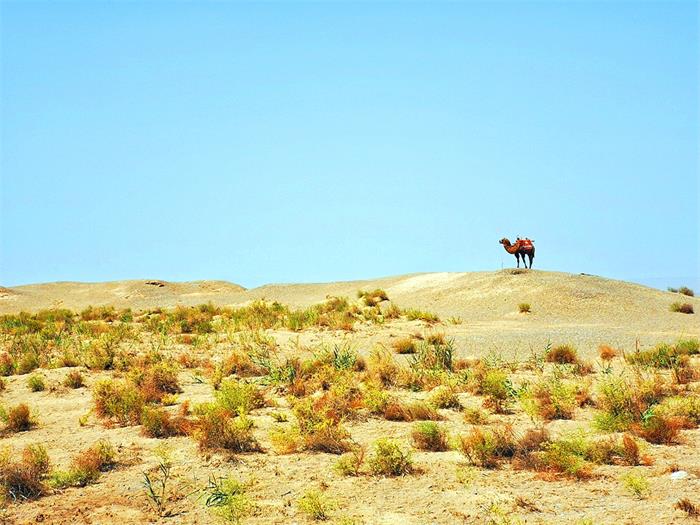 What Can be Visited in Yumen Pass:

Yumen pass is the throat pass between the Silk Road and the northern road of the Western Regions, located in the Gobi Desert 90 kilometers northwest of Dunhuang city. Here we listed some famous attractions in Yumen Pass: 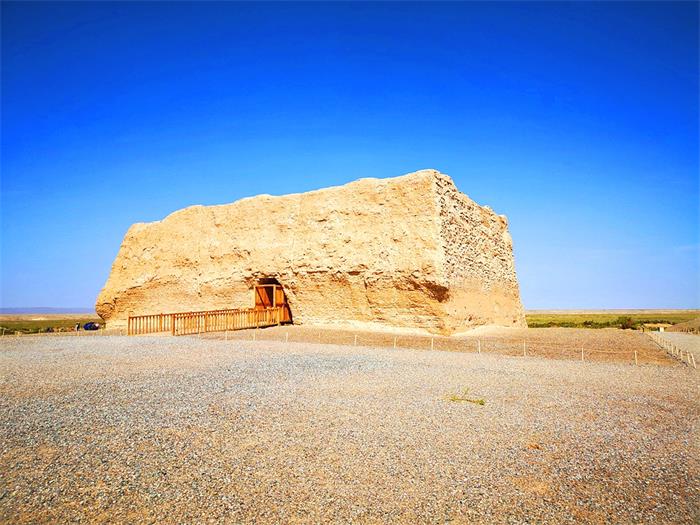 The Great Wall of the Han Dynasty in Dunhuang made full use of local advantages and geographic location for the material. Fortress walls were built by hamming at some places, while moats were dug at other sites. Some legs are pure natural screen, while others are simple beacon towers and fence-like defense works. Through huge ups and downs of 2,000-year weathering, sand covering, and human made damage, such high walls have entirely changed their appearance. Some of them have been flattered with the sign of existence or ditches, so the past charm has disappeared. Only the beacon towers at their ruins tell people of the Han fortress's trend and history. Despite the historical regret of advancing sand and retreating human beings, we have more tourist attractions today as clues preserved for mourning the past. 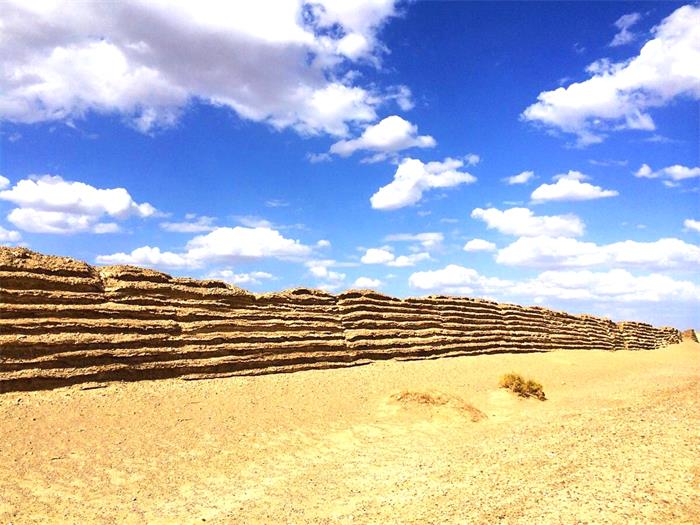 Hecang City, also known as Senior Fangpan City, is located in the Gobi about 90 kilometers northwest from downtown Dunhuang, two times larger than Yumen Pass during the Han Dynasty ( Junior Fangpan City). Records of Dunhuang housed in London records storing of army provisions in Hecang City, so it is believed that it is Hecang. According to the studies, Hecang City was founded in the Han Dynasty as a warehouse for grains and fodder. 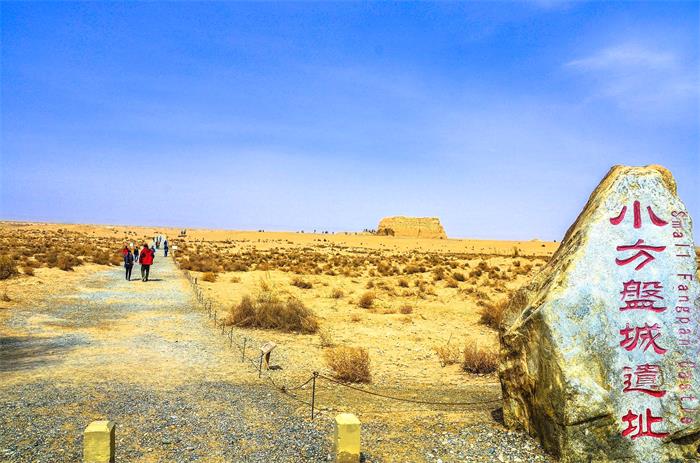 The ancient "Xiaofangpancheng Town," being called Yumen Pass nowadays, is square-shaped with bounding clay wall being reserved correctly. The gates on western and northern walls become distortion just as a hole because of the flake walls, and the lower part of the north entrance is obstructed. The town wall of ancient "Xiaofangpancheng Town," with the remnant area of over 600 square meters, is 24.5m long from east to west, 26.4m wide from south to north and nine 7m in remnant height; 3.7m in upper width, 4m in lower diameter of the eastern wall and 4.9m in a smaller width of the northern wall. A 1. 3m wide walkway goes around circumvallation top, 85 cm thick for the inner parapet wall, and 1. 5m for the outer one. An 83cm wide packway situated at a southeast corner within the town goes south along the southern wall. It reaches the top where the harmonious view constituted by Mazong Mountain, blue and clear Hala Lake, as well as the sandbanks, Gobi desert, and site of the Great Wall can be overlooked. No one believes here had ever been an ancient battlefield being densely covered with war clouds, and littered with corpses ". Looking southwest, the sites of old beacon towers intermittently extend through to Lup Nur within Xinjiang Uyghur Autonomous Prefecture.
In 1907, adventurer and archaeologist Marc Aurel Stein excavated many bamboo slips of the Han Dynasty in ruins not far north of Guancheng. He determined that Xiaofangpan city was the location of Yumen Pass ( Jade Gate ). According to the historical records, the site of the Yumen Pass should also be nearby. Still, the city is only 600 square meters as the westernmost customhouse of the Han Dynasty, which is too small. Therefore, the specific location of the Yumen Pass is uncertain. The well-preserved site of the small square city is determined as Yumen Pass, a national fundamental cultural relic protection unit.

Dunhuang Yumen Pass has an altitude of 1400 meters and a significant temperature difference throughout the year. It is a continental monsoon climate with a long cold period in winter, dry and hot in summer, short but not apparent in spring and autumn, it is dry and rainless. The lowest temperature is - 21.6 ℃ in February, the hottest in July, and the highest temperature is 38.4 ℃. The annual average temperature is 6.9 ℃, and the rainfall is 82 mm.


How to Get to Yumen Pass:

1. Located in the west of Dunhuang City, Gansu Province, no public buses are heading for Yumen Pass. Travelers have to charter a car to enjoy a one-day west-line tour of Dunhuang.
2. Drive 34.1km from Dunhuang along with G215, turn at the right front, after 58.4km, bend at the right front, drive for 20m, pass the site of the high wall of Han Dynasty on the right, and then you can reach the site of Yumen Pass.

1. Yumen Pass is situated on the Gobi, with a dry climate, intense sunshine, and sandstorm. Tourists need to bring some drinks and anti-sand sunscreen equipment before touring.
2. It should be noted that there is still controversy about whether the site was the Yumen Pass of that year. Anyway, after more than two thousand years, the gate can be used to recall the past and the present.