Post Time:2020-01-15 Views:
The ancient silk road
The silk road is a historical international trade road, which connect trade & civilization from China, India, Persia, and Arabia to Greece and Rome. This road has started from ancient capital of China - Chang’an, and terminated on the coast of Mediterranean, Xinjiang is located at nearly half of the silk road , therefore Xinjiang was an important section of the ancient silk road where has lot of historic relics and sites.
silk road,Gansu tour,xinjiang,qinghai,kashgar,dunhuang,zhangye travel
As it mentioned above, the silk road is a trade road from east to west, silk was not the only item for trade, but it was the most popular item in all over the counties at that time.
China is home of silk products. With the thriving of Sericulture, many handmade high quality silks were produced in China, silks were already been the rani and noble women’ s apparel at that time. But in the western countries, people knew very little about silk products. Therefore the trade road from china was named as the ‘silk road’. At that time the empire of Rome purchase lots of silks, at first, people in Rome did not know silk originally made in China-At that time called “Han”, they purchase silk from parthian, because of that, parchian businessman made lots of fortune from silk trade as the middle-men. So that, as early as the 1sth century AD, some enterprising Roman merchants tried to send agent to explore new routes for purchasing silk due to large domestic demand of silk, until the 2nd century bales of silk began to reach Rome via India, of course the price of silk from India were much cheaper than parthian. But people in Rome still do not know the origin of silk is China, They thought silk was grown from the tree which was barely found in Europe.
Although the silk road carried many other goods besides silk, the Chinese trade caravans were laden with gold and other metals, woollen, linen, textiles, ivory, coral, amber, precious stones, asbestos and glass which was not manufactured in China during the silk trade. Not all these goods travelled the whole length of silk road, many of those items were sold at the oases or towns on the way, and then those businessmen replaced them with other goods, such as jade. Few of the caravans even travelled almost the whole way, but they never reached Rome, nor Romans traders to China. Now all evidences indicated that the trade along the silk road has a history of more than 300 years.
Among those who initiated the silk road and helped it flourish in ancient times were government officials and envoys, merchants and monks ,buddhists ,Manicheaists, Muslims. Moreover, the flora and fauna from the central Asia were also travelled with the caravan, like clovers, grapes, flax, pomegranate, walnuts, cucumber, carrots, saffron, and animals like lions peacock, elephant, camels, ferghana horses etc. They are all introduced from western region to the east via silk road.
In Yuan dynasty (1271~1368), under the rule of mongols, the silk road had more routes than earlier, and Chinese silk could be bought by Italy in 1257. Not long after Italian merchants reached China, Marco Polo’s father and uncle arrived in China in 1265, on a diplomatic mission of which they were recruited by an envoy of Italy, while they were in inner Asia on a commercial venture: bringing jewels as “gift” to the ruler of the Golden horde, in return they were presented with goods worth twice as much as the jewels. Then Marco traveled to China again in 1275. Marco stayed in China for business exportation, after 20 years Marco reap the largest share of profit from the business. After that, Marco went back with jewels, he reported success of such early adventures, silk could be purchased in china at one time for 20 pound, and assuming a safe return to Italy, it could be sold for a price at about 3 times more than their cost.
Gradually, the silk road gave way to the rapidly developing sea trade after Yuan Dynasty. But many historical sites and relics left along the route prove how it had prospered in early time. The most fascinating one of all the historic sites on the silk road is the ancient city of Loulan, Located in the northwest of Loppor, it used to be a key hub of traffic of the silk road, with a past of commercial prosperity. Now, however, there are only the ruins of city buried in the desert. mummies of men and women have been unearthed from the ancient tombs there. Countless cultural relics have been discovered from the ancient cities of Gaochang and Jiaohe, situated in Turpan. The tourists can still see distinctly the ruins of two ancient cities, and the significant royal palaces. The funerary objects unearthed from the tombs here include large quantities of documentary paper, silk, cotton and hemp fabrics of excellent workmanship.
Today the silk road is a passageway of Chinese people in the economic and cultural interchange and friendly contact with all the people in the world, Silk road is rejuvenated! 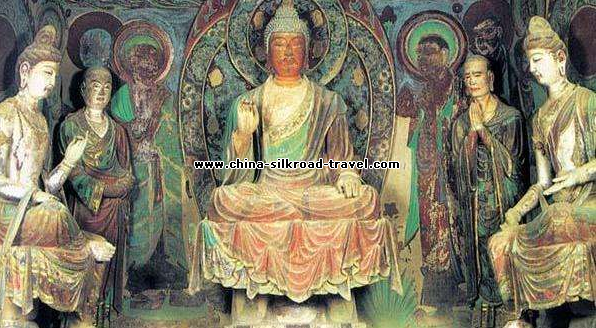 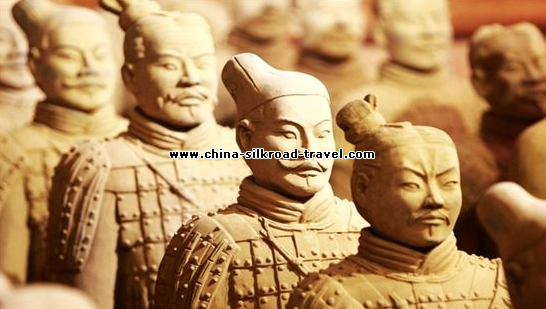