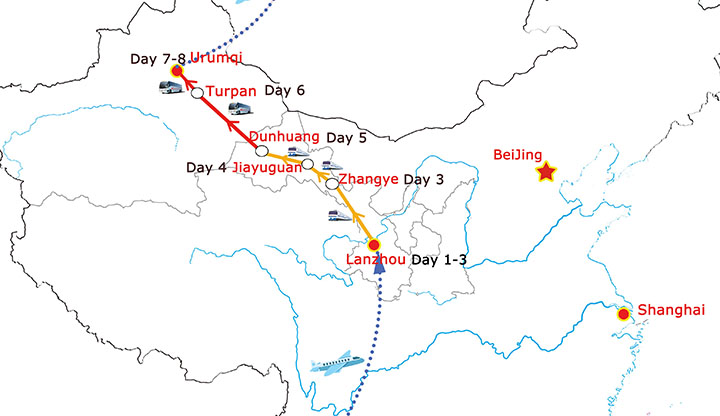 Today you will arrive in Lanzhou by train or flight on your own. Upon arrival, meet our nice guide and then will be transferred to the hotel for rest.  The city is an important transportation hub. The legacy of centuries of travel and trade on the Silk Road are the Bingling Temple Grottoes near Lanzhou and ancient temples and fortifications in the Hexi Corridor, and the modern city of Lanzhou offers the Gansu Provincial Museum as a travel highlight and modern facilities for a Silk Road tour. On and off for about 1,600 years after 100 BC, the Silk Road through the Hexi Corridor and Lanzhou was an important trade route. Accommodation: In Lanzhou Legend Hotel 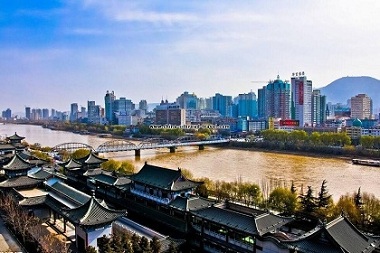 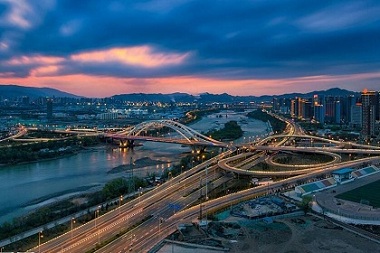 Our nice guide will meet you at the hotel after you have breakfast, then drive about 1.5 hrs to visit the Binglinsi Temple. Enjoy Cruising from Liujiaxia Gorge to Binglingsi Thousand Buddha Caves, which stretch for 200 meters, were built during the Western Qin, North Wei, Sui, Tang, and Song, Yuan, Ming, Qing dynasties (between the 3rd and 18th centuries). They are highly valued for their contribution to research into the history of Chinese painting, and the spread of Buddhism during that time. then you will take a Lanzhou city tour, visit the first bridge Of the Yellow River, it is the first highway bridge in the ancient Yellow River, also the second city steel bridge in China. afterwards, transfer to Yellow River's Mother Statue, explore the ancient history and culture of Gansu Province and stroll around the Waterwheel park, an ancient irrigation tool. After the visiting, you will be transferred to the train station and take an express train to Zhangye for rest. Accommodation: In Zhangye Tianyu International Hotel 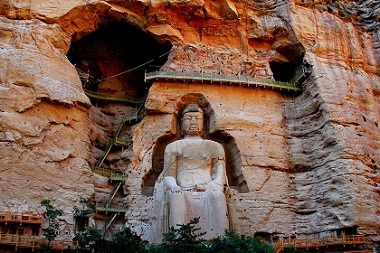 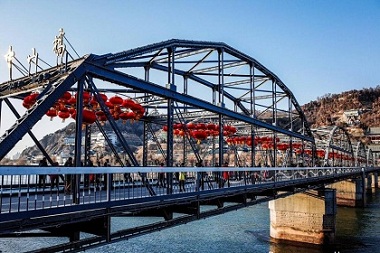 After breakfast at the hotel, we will take you to visit the Grand Buddha Temple, which is the important place of the Silk Road. the Giant Buddha Temple is the largest architectural relic in Gansu Province of the Western Xia (1038-1227) period. China's largest reclining Buddha is well preserved in this temple. then we will proceed to visit the Zhangye Danxia National Geological Park, which is 510 square kilometres in total, it located in the north of Qilian mountains, SuNa County territory. It includes the colour hills in Linze country ,ice hills, Danxia and GanZhou District and PingShan lake. The scenic Danxia, is a distance of 40 km from east Zhang Ye city, north from Linze county town by 20 kilometers, this is the most typical arid area of northern China. Afternoon, take the express train to Jiayuguan. Met and be transferred the hotel for rest. Accommodation: In Jiayuguan Hotel 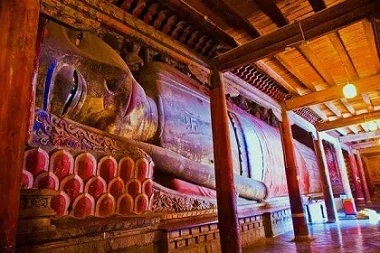 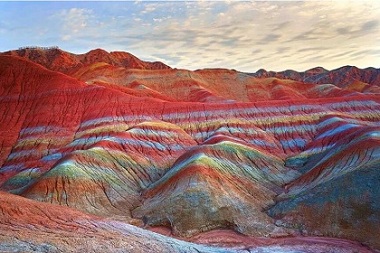 In the morning, we will meet you at the hotel lobby and take you to visit the Jiayuguan pass. This Ming Dynasty fort guards the strategic Jiayuguan pass, at the western end of the Great Wall – this was the last section built by the Ming Dynasty. Then travel to Weijin Tombs, which are ancient tombs of brick paintings dating back 265-420 AD. The wall paintings discovered are lifelike and succinct in style and cover a wide range of subjects including politics, economics, culture, military affairs, folk customs, and science and technology during the Wei and Jin periods. Afterwards, we will drive all the way to the next stop Dunhuang with about 4.5 hours. Upon arrival, visit the Echoing Sand Mountaion&Crescent Lake. Echoing-Sand Mountain, known as Mingsha Mountain to the Chinese, it is famous for the constant sound of the moving sand. and the Crescent Lake, situated within the Echoing-Sand Mountain Park, the Crescent Moon Lake is literally an oasis in the desert. The lake’s name derives from the crescent moon shape taken by the pool of spring water between two large sand dunes. After visit, you can stroll around the Shazhou Night Market, the most bustling place of Dunhuang at night, taste the local cuisine and buy some souvenirs for your family and friends. Accommodation: In Dunhuang Tianrun Hotel 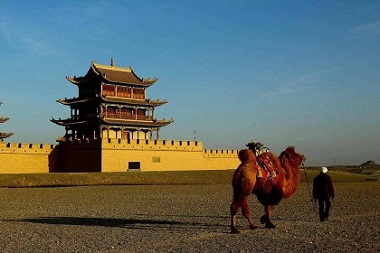 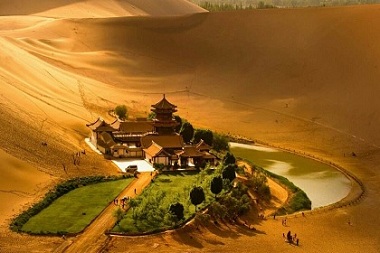 Morning full day sightseeing in Dunhuang, visit the Mogao Grottoes, also known as the Thousand Buddha Grottoes, this UNESCO World Heritage site is one of the great artistic and religious wonders of the world and it is famous for its exquisite murals and various sculptures inside the caves, which was built in different dynasties, spanning 1,000 years of Buddhist art. after lunch drive about 1.5hrs to the train station, take the express train to Turpan which has been built into a beautiful oasis garden city, not only features in history and civilization of the ancient Silk Roads, but also presents modern elegant demeanors. Now Turfan is an important base of grape, cotton, Hami melon and oil of the autonomous region and even in our country.. Upon arrival, visit the local Uygur family in the vineyard. Accommodation: In Turpan Huozhou Hotel 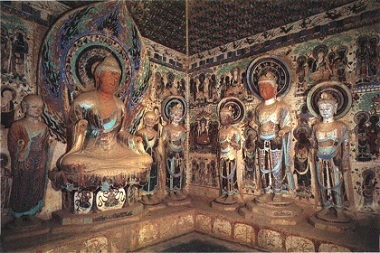 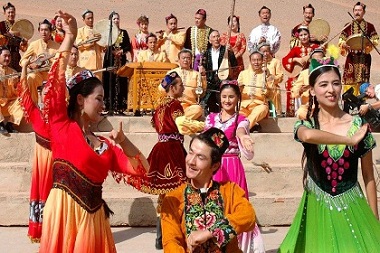 In the morning, your guide and driver will pick you up from the hotel, take you to visit the Karez Well, a special irrigation system in desert areas, which is still used today, is a unique irrigation system in Turpan. It takes advantage of the slopes, draws the underground water to flow by itself to irrigate farmland. It consists of four parts: vertical wells, underground channels, ground canals, and small reservoirs. Then continue to our next stop Sugong Minaret, the largest Islamic minaret in China built in 1778. And finally, we are going to the highlights of your Turpan tour Jiaohe Ruins—with a history of 2,300 years lies between two rivers on a loess plateau atop a cliff of over 30m. It is one of the best preserved ruins of its ancient era in China, it was include in the World Heritage List on June 22, 2014. In the afternoon, we will drive about 2.5 hrs to Urumqi which is the capital city of Xinjiang Province. Accommodation: In Urumqi Yilite Hotel 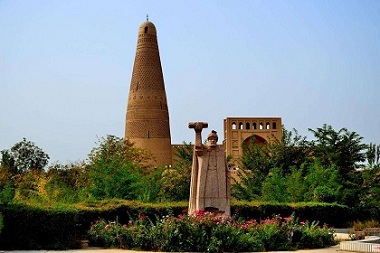 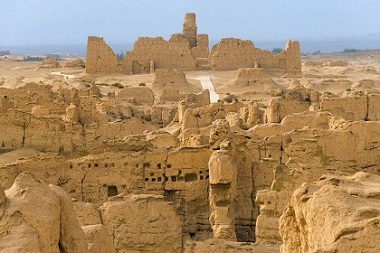 After Breakfast, our nice guide meet you at the hotel and then drive to Fukang and visit the Heavenly Lake, a picturesque Alpine lake, 2000m up in the Tianshan mountain range. Heavenly Lake is a long and narrow gourd-shaped moraine lake, 3400 meters long, about 1500 meters wide, 105 meters at the deepest point, with an average depth of 40 meters, covering an area of about 5.9 square kilometers. There are eight beautiful scenic spots in the lake scenic area. Afternoon, back to Urumqi, you will have a chance to visit the Xinjiang International Bazaar, the largest bazaar in Urumqi. You'll find a bustling market filled with fruit, clothing, crafts, knives, carpets and almost anything that you can imagine. Accommodation: In Urumqi Yilite Hotel 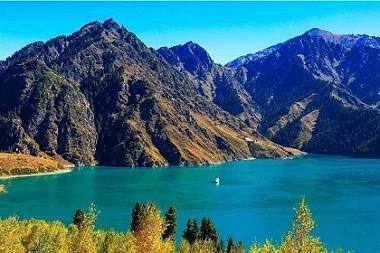 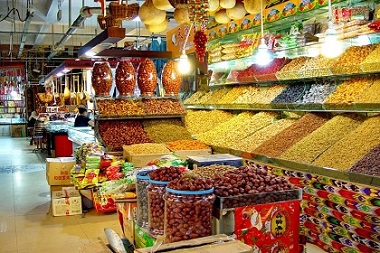 Today you will be transferred to the airport and back to your sweet home, wish you have a pleasant home journey.

Please note:  you can add Xi'an section before you take the tour start from Lanzhou, or extend the tour to Kashgar or Central Asia. more information please contact us!

Private transportation with good AC (5-7seats)
Excellent English guide service
All the entrance fee listed in the itinerary
4star Hotels listed in the itinerary with breakfast,
Two bottles of water each person every day
All the express train listed, 2nd class. Lanzhou to Zhangye, Zhangye to Jiayuguan, Jiayuguan to Dunhuang, Dunhuang to Turpan
Express boat in Binglinsi Temple

lunches and dinners though out the itinerary
Personal expenses and tips to the guide and driver
International airfare with tax, flight arrive in Lanzhou and Departure from Urumqi
No guide service if only airport and train transfer only.