1. Lanzhou beef noodles
Lanzhou clear soup beef noodles commonly known as "beef noodles", It is the most famous flavor snack and the most distinctive popular economic snack, it is regarded as Lanzhou’s McDonald's by the local people.
Lanzhou beef noodle was founded in Qing dynasty, during the ruling of emperor Guangxu, and was first created by a Hui nationality old man Ma Bao Zi. The beef noodle is famous for its well-stewed beef, tasty soup and its fine quality. Lanzhou beef noodles have five characteristics: clear (soup clear), two white (radish white), three red (spicy oil red), four green (coriander green), five yellow (noodles is slight yellow and bright).
According to the thickness, noodles can be divided into large width, width, fine, two fine, capillary, leek leaves and so on. Noodles are made by hand, a bowl of noodles can be made in less than two minutes, then poured beef noodle soup, white radish slices, mixed with red chili oil, green garlic seedlings, coriander, and it just tastes amazing. 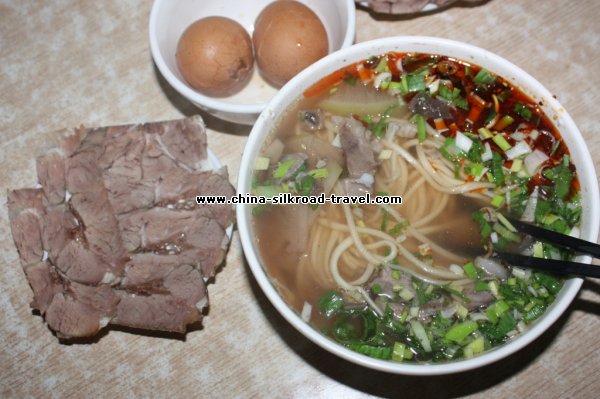 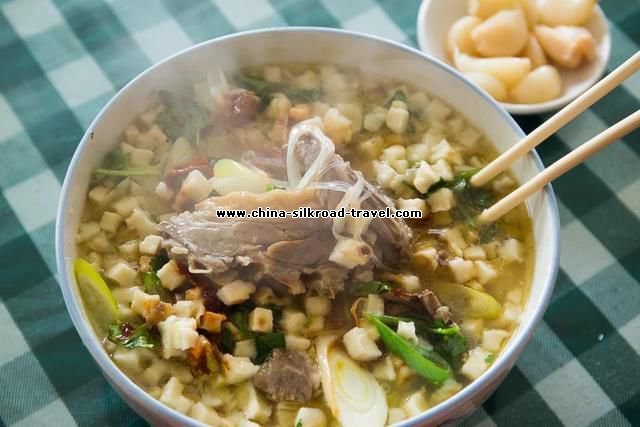 2. Bun Mutton soup
Mutton soup is heavy, mellow, thick meat soup, smooth tendons, aroma overflowing, leave a lingering aftertaste, and warm up your stomach. Its cooking technology is very strict, and the cooking technology is very particular. The "toto bun" is crispy and fragrant, cooking with meat and the buns won’t disperse in soup. Before eating, you must break the toto bun into pieces. When breaking the steamed bread, the smaller the better, this is to facilitate the five flavor into the steamed bread. Then boiled by the cook.

The amount of seasoning should be just suitable, use strong fire for a quick boil, stop at good timing and fill the bowl immediately, the cook pursues perfect fusion of original soup and the steamed. Bun Mutton soup not only focus on cooking, but also pays more attention to creating new ways of eating.