Post Time:2018-12-26 Views:
xinjiang Jinghe Aobao is located in the northeast of Jinghe County. It is 8 km away from Jinghe County. Its geographic coordinates are 82?59', 44?39', and 227 meters above sea level. It was built in July 1994 to celebrate the 40th anniversary of Bozhou and to commemorate the 10th anniversary of the celebration of the 11th Living Buddhist Panchen Erdeni Giljianzan's passing through Jinghe River and the 223rd anniversary of the return of Mongolian Turhut tribe to the motherland. 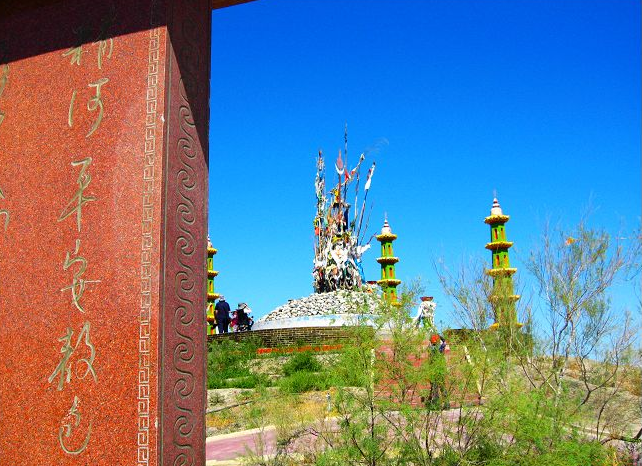 Aobao, in Mongolian called "Awa" or "Takelogen", and it means ‘heap’. In historical books, it is called "Obo". At first, it is a sign of the road, location or realm, but also extended to the meaning of "the mountain of worship", gradually evolved into a place for worship of gods.

The OBO sacrifice activities are held every year in the summer and autumn season with abundant water grass and fat cattle and sheep. On the day of sacrifice, the masses gathered to prepare mutton and dairy products for worship of the gods, praying that the ministry would live and work in peace and contentment, that the descendants would be full, that harmony and unity would flourish.

Lama burned incense and chanted sutras during the Aobao sacrifice. People worshipped Aobao by piling barrier stones with mascots such as "Kemo" and "Hada" on the top of the Aobao. At the same time, they burned incense and prayed, poured milk wine and fresh milk to show their worship. After sacrifice, there are also traditional Mongolian sports such as horse racing, wrestling and archery.

saber and spear inserted on obao is said to be used by Genghis Khan and Kublai Khan, engraving the glory of the frontier expansion and attaching Hada to the Soviet Union to express the admiration of their descendants.

In the mind of the xinjiangherdsmen, Obo symbolizes the spirit of God in his place. It was built up with stones and blocks. Outside 12 small heaps, around the middle, a heap composed of the largest “Obo" built on top of hills, generally circular, top inserted with wickers, like beacon towers.
At first, they built "OBO" in tribes. Every time people go out for a long journey, they will dismount to pay homage to the "Obo" and pray for peace. We should also add a few stones or a few soil to the "OBO" and then cross the horse.