Post Time:2020-03-03 Views:
China is the birthplace of gunpowder and early gunpowder weapons. The earliest gunpowder refers to a mixture of saltpeter, sulfur and charcoal according to a certain proportion. During the Tang and the Song Dynasties, Chinese manufactured firearms with burning and killing effects were used in large scales in wars. In 13th century, along with the expedition of the Mongol armies along the Silk Road to the West, the gunpowder formula and firearm manufacturing technology were also disseminated to Europe either directly or indirectly through the Arabs. The Mongol troops were equipped with a special artillery wing that carried firearms such as hand guns, flame arrows, flamethrowers, bombs and others, to support the cavalry and large-scale filed operations. In 1235, the Mongol army launched its second expedition to the West. One hundred and fifty thousand cavalry marched straight to the West and captured Ryazan, Moscow, Kiev and other places. Then the Mongol cavalry was divided into three routes, with the north route heading for Poland and southwest Germany. Allied forces of Germany and Poland suffered crushing defeat. At the time it was speculated that the Mongols had smoke-vomiting monsters, and that they also used the “Chinese dragon flame tube” which was able to puff out flames. European knights who saw these firearms for the first time were totally shocked. 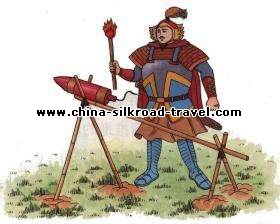 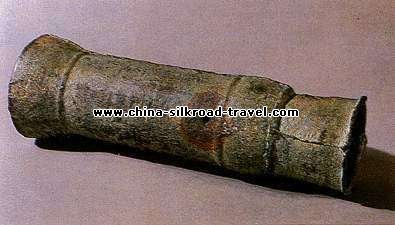 In 1258, under the attack of the Mongol army equipped with firearms, Baghdad, capital city of the Arab Empire Abbasid fell. After the demise of the Arab Empire, the Mongols established the Erie Khanate Kingdom, which quickly became the hub from where gunpowder and Chinese science and technology disseminated to the West. Yuan Dynasty did not prohibit the export of firearms and the Mongol army also recruited soldiers from among the Arabs and the Europeans. Both measured enabled the Europeans to keep abreast with the advancement of the gunpowder manufacturing technology. After the 14th century, firearms such as hand guns, flame arrows, flamethrowers, hand grenades, bombs and fireworks were produced in Europe and they were either based on the Chinese technology or imitations of the Chinese samples.