Vicissitudes of the Silk Road——Han Dynasty 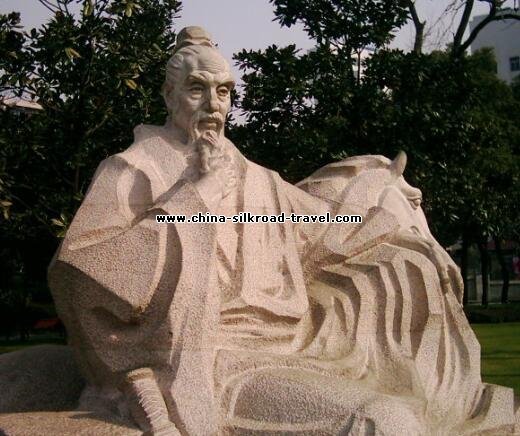 In the 5th year of the Yongping Period (72), General Dou Gu was ordered by the Emperor to led an army to proceed to the Western Regions. His errand was to contact small countries in the Western Regions and form an alliance with them to deal with the Huns,Ban Chao, a junior officer in the Han army was given high regard. In the 16th year of the Yongping Period, Dou Gu appointed Ban Chao as the “Acting Military General” and sent him to lead thirty-six men to the Western Regions. Ban Chao and his retinue first arrived in Shanshan Kingdom. At the beginning, the Shanshan King was very hospital towards the Han envoy. But soon his attitude changed into one of indifference, Ban Chao found the Huns had also sent envoys to Shanshan and they exerted pressure on the Shanshan king to betray the Han Dynasty and surrender to the Huns. The Shanshan king was hesitating. Ban Chao consulted with his thirty-six men retinue and concluded that “no risk, no gain”. So he led his men to steal into the residence of the Huns mission and killed all the one
hundred and thirty mission members. On the following day Ban Chao called on the severed head of the Huns envoy. The Shanshan king was so scared that he agreed to pledge allegiance to the Han Dynasty. Dou Gu reported Ban Chao’s heroic deeds to Emperor Ming who was so pleased and appointed Ban Chao as the Han envoy to Shanshan Kingdom. Since then Ban Chao was sent on a resident mission to Khotan (present-day Hetian) where he re-opened the Silk Road. After years of operation, all countries in Central Asia pledged allegiance to the Han Dynasty.

The Han Dynasty Silk Road starts from Chang’an and divides into two routes after passing the Hexi Corridor. The southern route goes westwards from the Yangguan Pass located in the southwest of Dunhuang. It then follows the northern foot of the Kunlun Mountain, passing through Khotan, Shache and Puli(present-day Tashkurgan), crossing the Congling Ridges and reaches Dayuezhi. Further westwards the route reaches Anxi (present-day Iran) and Daqin (ancient Roman Empire) at the Mediterranean; alternatively the route proceeds southwards from Dayuezhi to reach Shendu (ancient India). The northern route goes westwards from the Yumenguan Pass located northwest of Dunhuang. Passing the Former Cheshi Kingdom (present-day Turpan), it goes westwards along the southern foot of the Tianshan Mountain and reaches Dayuan after passing through the Kingdom of Yanqi and Shule.
In order to enhance relations with western countries, Ban Chao sent Gan Ying as his special envoy to Daqin Kingdom (ancient Roman Empire) on the 9th year of the Yongyuan Period(97) during the reign of Emperor He. Gan Ying and his retinue set off from Qiuci (present-day Kuche in Xinjiang) and passed through countries such as Tiaozhi (present-day Iraq) and Anxi and arrived at the Persian Gulf which bordered Anxi to the east. Because Anxi had always been trading with the Romans in Chinese silk, it was reluctant to see the establishment of direct trading relations between the Han Dynasty and the Roman Empire. So Anxi’s officials exaggerated the difficulties and dangers in crossing the sea to Gan Ying, aiming at stopping the Han envoy to meet the Romans. Although Gan Ying did not contact the Romans directly on this trip, he managed to reach the east coast of the Mediterranean and collected much information on Central Asia, India, West Asia and Rome. Since then trade between China and western countries further expanded. Silk Road became a transportation network connecting countries along it during the Eastern Han Dynasty. The number of countries having trade relations with the Eastern Han Dynasty increased significantly. In 166, king of Daqin Andun, i.e. Roman Emperor Marcus Aurelius Antoninus, sent an envoy to Eastern Han, thus opened the prelude to friendly exchanges between China and European countries.