Post Time:2018-12-29 Views:
During the Northern Song Dynasty, the relatively weak Han regime ruling the Central Plains controlled only a limited area. Its trade with the Western Regions and Foreign countries also suffered impediment. The Silk Road was not open. By the time of the Southern Song Dynasty, as a result of the vigorous support from the imperial court, coupled with advances in the shipbuilding technology, sea routes became the major channel for China’s external communication and trade. Land route Silk Road was almost abandoned. 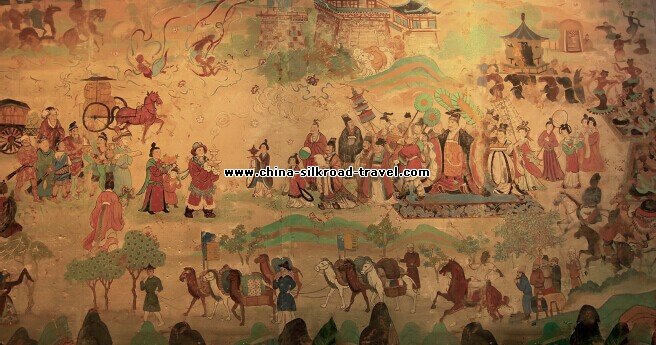 In the 13th century, the Mongol Empire in the northern grassland rose. Led by Genghis Khan the Mongolian cavalry took three expeditions to the Western Regions and conquered vast areas of North Asia, Central Asia and West Asia. Having conquered kingdoms of West Xia, Jin, and the Southern Song, the Yuan rulers unified China and set up a well-developed posthouse system, which enabled the Silk Road to flourish again. Emissaries, missionaries and merchants from European countries came to China by way of the Silk Road. The famous Italian traveler Marco Polo was among them. Born to a merchant family in Venice, Marco Polo(1254 - 1324) traveled along the Silk Road in May 1275 together with his father, uncle and a Yuan Dynasty envoy from Venice and arrived in Shangdu(northwest of Duolun County of present-day Inner Mongolian). Young Marco Polo was greatly adored by the Yuan Emperor Kublai Khan who even sent him as the imperial envoy on missions to many parts of China and other Southeast Asian countries. In 1291, Marco Polo took the order from Kublai Khan to deliver credentials to France, the United Kingdom and Spain and returned to Europe via the seaway. He arrived in Venice in 1295. in his memoirs Marco Polo, he recorded the rich and beautiful oriental cities that he had visited. The book also documented ancient burial customs in Dunhuang, described landscapes in Jiuquan where “walls are built around the city”. He also recorded the neat layout and forest like temple buildings in Zhangyr and the large yak population, rich wheat and musk in Wuwei. The book played an important role in helping the Europeans to understand China by broadening their horizons in facets of geography, economics, culture and others.
In the 24th year of the Hongwu Period of Emperor Taizu (1391), the Ming army captured Hami. In 1406, Emperor Chengzu established an office(Wei) in Hami to serve as the base for implementing its economic policies in the Western Regions. The Ming government also established tributary relations with countries in the Western Regions. In 1472, the Mongolian Chagatai Khan led his army to attack and captured Hami. The Ming army was forced to retreat to Jiayuguan Pass, leaving the regions beyond the Jiayuguan Pass falling apart. Although local trade among civil society still went on along the Silk Road, the booming prosperity no longer existed. In the 15th century, with the Ottoman Empire’s occupation of Constantinople, capital city of the Eastern Roman Empire, land transportation in Europe and China became all the more difficult. Europeans had to explore new trading routes. With the advancement of shipbuilding and marine technology, more and more Europeans attempted to travel to the East by the sea. In 1498, a Portuguese navigator D. Gama discovered the Indian Ocean route, thus opened up a new route on the sea. Westerners coming to China via the sea route increased gradually. Since the 15th century, Silk Road gradually became a relic of China’s history of exchanges with foreign countries.