Post Time:2018-12-26 Views:
Lying on the Qinghai - Tibet Plateau, known as the Ridge of World, the Qinghai Lake is embraced by the Datong Mountain, Riyue Mountain and Qinghai South Mountain in the northeast of Qinghai Province. As the largest inland saltwater lake in China, the oval-shaped lake covers an area of 4,635 square kilometers and is 3,196 meters above sea level. In ancient times, it was called “Xihai”, “Xianshui” and “Xianhai”. In Tibetan, it is called “Cuowenbo”, meaning “a blue sea”, and it is called “Kukunuoer” in Mongolian also meaning “a blue sea”, so it has its present name, after which Qinghai Province was named.
Qinghai Lake has a circumference of 360 km, an average depth of 19m and a water capacity of 105 billion m³. In the lake are five islands of different shapes, namely the Haixin Hill (hill in the middle of the sea), Gucha Hill (Three-stones Hill) and Birds Island, Haixi Hill (hill in the west of sea) and Sand Island, of which the Birds Island is 10 meters above the lake water, covering an area of 0.11 square kilometers. In late spring and early summer every year, thousands of birds come to their kingdom and their chirm can be heard several miles away, forming a spectacular scene. Various kinds of birds roost here, including gull, wild goose, swan, crane, and the rare black neck crane. Haixi Birds Island has an area of 4.6 km², and its eastern part is a cliff bordering on lake water while the west is a slow slope connected to Haixin Hill. On this island live tens of thousands of cormorants. This beautiful island, where is the paradise of birds, is a great wonder on Qinghai Plateau, attracting large numbers of tourists from both home and abroad.
The Qinghai Lake contains little oxygen and much salt, with little plankton. It has a visibility of 8-9 meters, so it appears especially blue, just like a piece of glittery sapphire. Various kinds of birds hover in the sky while countless fish swim in the water. The lake is surrounded in four sides by Datong Mountain, Riyue Mountain, Qinghai South Mountain and Xiangpi Mountain, serving as four imposing natural barriers. Along the lake, the grassland stretches several hundred miles. Every summer and autumn, the grassland is covered by overlapping grass with numerous flocks and herds, adding an artless flavor and leisure to the lake. Chains of mountains, the blue lake, the green grassland and the yellow wheat fields form a landscape of the open west area. 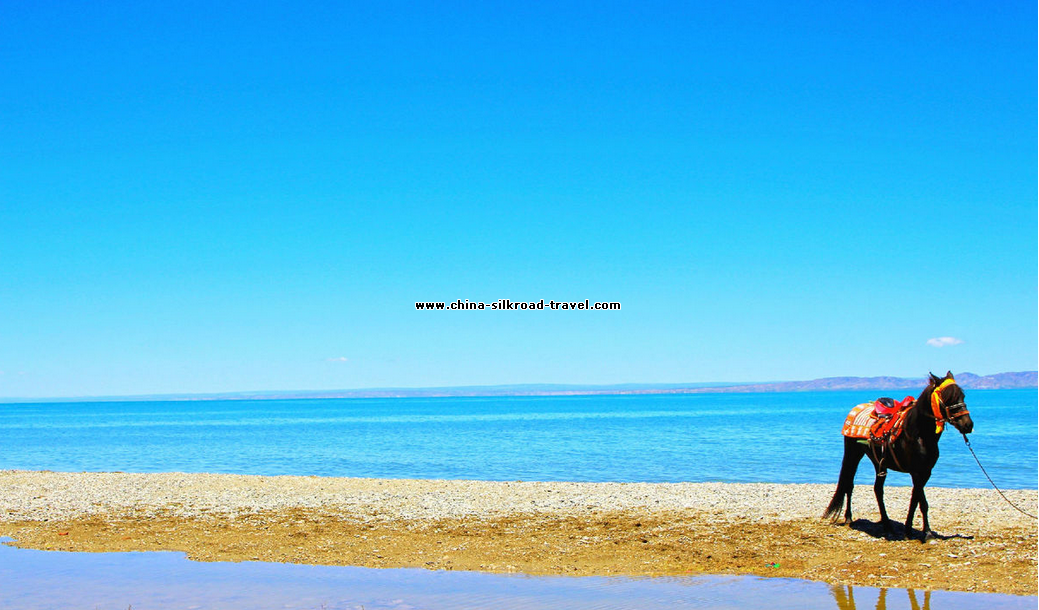 The weather here is cool all the year round. Even in midsummer, the daily average temperature is about 15℃, making the lake a perfect summer resort. When the golden season season approaches, the rippling blue water reflects the blue sky and white clouds in the water, around the lake green grass carpets the ground and various wild flowers contend in beauty and fascination, huge patches of cropland welter with wheat waves and fragrant golden ripen flowers, accompanied by the melodious Tibetan pastoral songs, sheep flocks like patches of white clouds roll on the dark green pastures. All these poetic and refreshing views are so enchanting that tourists linger on and on, forgetting to return home. When the winter comes, the lake starts to ice up and the gigantic “ice mirror” glistens in the sun, emitting dazzling brilliance.
The lake is also abundant in fish, among which the naked carp is the most famous and delicious. Also known as Huang fish without scale, it has a reputation of the king of lake in the local area. The naked carps live on plants and planktons in the lake and grow very slowly but very long due to the low water temperature. For this reason, it has been introduced to the similar lakes in Inner Mongolia and Liaoning Province.
The lake has a number of attractions that draw travelers in the region in. Ornithologists ,campers, hikers, botanists, swimmers, sailors, fishermen, loners and nomads all find areas of interest around the lake. The beauty here lies in its salty vastness and the remote peace that it instills. The colors that can be found around the lake are of purity and contrasts, from the deep yellows of oil seed rape against the cold blues of the lake to the dark greens of distant mountains against the fluffy white of bilious clouds. In a latest competition activity by the magazine of China National Geography to select the country’s most beautiful places, Qinghai Lake ranks top of China’s five most beautiful lakes.
Traveling to the lake can be chosen either in the independent way or by tour. Most people come to the lake from Xining, the capital of Qinghai that is located 150km to the east of Qinghai Lake. It will be far easier for you to organize a tour through one of the agencies in Xining, and this is especially practical for those with limited time. Budget travelers, hikers and campers, however, with time to spare may find traveling independently worthwhile.