Post Time:2018-12-29 Views:
Rich and colorful as well as bright-colored characterizes the painted bricks in Jiuquan Han ‘s graves. As regards the shape and structure of the graves, the quadrate coffin chamber with a sloped tunnel in the front of the door of it. The graves, because of the differences in their construction materials, are arranged under categories of arched brick graves. Graves combined bricks and adobes, a few tombs as well as small bricking graves and coffins for the old dead, five in total. Most of them face to east, few to the south. As for the shape and structure of Jiuquan Han ‘s graves, they are arranged under categories of the grave with a single quadrate, bricking chamber and an arched bricking door; the grave with a single chamber combined bricks and adobes; the grave with front and back chambers, arched bricking vault; the child’s grave with bricking pit chamber. Tunnel, door, corridor, front and back bricking chambers constituted the grave’s shape and structure in the latter stage of the Eastern Han Dynasty. The cultural relics such as wares, bronze wares, bone wares, silks as well as painted bricks and murals were unearthed at Han ‘s graves. The content of over 300 painted bricks touch upon the politics, military affairs, economy as well as the culture and living, etc. The judgment from the facts tells that 1400-odd ancient graves being widely distributed in the circumference of 10km around. Jiayuguan, under the jurisdiction of Jiuquan prefecture in both the Han and Wei Dynasties, enjoyed the prosperity of “lots of envoys coming and going”, “merchants and peddleries both at home and abroad staying or passing the frontier fortress every day”, as a result of it, abundant cultural heritages were left. 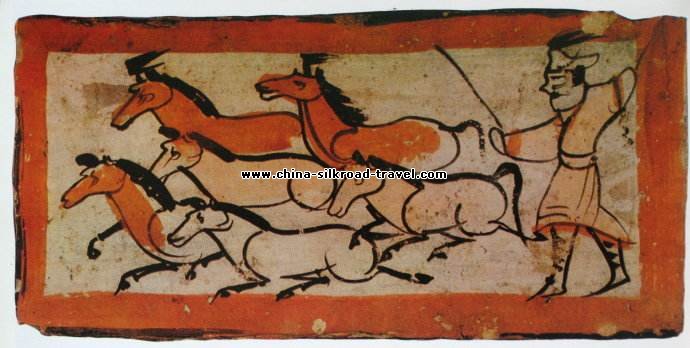 The figures on Han ’s painted bricks were depicted vividly, strikingly true to life, the colorful social life in those days was reflected and to be regarded as the vivid portrayal of people’s lives then and there. The general appearances of the painted bricks are arranged under categories of stationing troops to open up wasteland. In the Han Dynasty, the garrison troops should open up wasteland and grow food grain concurrently. As painted on “Chart of Station Troops Opening up Wasteland” that some soldiers dressing the ranks and going into military training with spears and shields led by military officers; some doing soil preparation, planting and threshing grains on the ground, the farmwives also can be seen in the scene. Most contents of painted brick relate to the station troops opening up wasteland owing to both Jiuquan and Jiayuguan closing to the frontier area in those days. The post-horse was mainly engaged in the military communication in ancient time. The chart of “Estafette Inform” was depicted vividly to the life. It not only reflects the military communication in those days but also provides the reference for researching the development history of Chinese ancient post,hunting. The wasteland between Jiuquan and Jiayuguan in old time had various species of animals there. The contents of painted bricks relate to hunting, shooting wild pigs, hawking and pursuing conies. The animals deal with oxen, sheep, horses, chooks, dogs and pigs, etc; kitchen work. The interesting and characteristic cooking scenes, for example preparing a meal, cooking fire, shouldering water, cutting meat as well as roasting meat and cooking wheaten food, etc. Look familiar; military affairs. The Hexi region was important place stationed by huge forces since the Han Dyansty. The chart of tour of military inspection emerges the vast and mighty scene of going out for a battle and tour of inspection in those days. The huge barracks and the enclosing walls as well as the tents are witness of garrisoning troops there; sericiculture. The painted bricks employed the picturesque scenes of picking mulberry-leaves, sericiculture as well as reeling the silk thread off cocoons; entertainments. The remarkable dance scene, such as “Ta-ge (singing and dancing at once)” and “three dancers” dance express their elegancy actions and impassioned ambience. In conclusion, all aspects of the life in those days were involved in the contents of painted bricks, people seem to be personally on the scene and return the old days while seeing them. They are detailed and dependable materials for researching the history of that time.