Post Time:2020-05-19 Views:
Yadan Landform, alias “demoniac town”, lies 180km to the northwest of the Dunhuang city proper. The broad, flat-topped elevation with one or more cliff-like sides and several or scores of meters tall, common in Gobi desert in northwest China together characterize it. It’s called “wind-erosion mesa” with “Yadan Landform” as its scientific name.
The word of “Yadan” means “cliff”, the inflexion of “Yaerdan”. Chenjia-qi, the Chinese famous geographer who ever went into the Luobubo area twice at the early days of the last century and called the group of “wind-erosion means” the “Yadan”, the universal term of the geography afterwards. The causes of formation of them are many and varied because the ocean existed west of Luobubo area (with Dunhuang region included). Lakes and swamp countries formed along with the upthrust, then the Gobi desert emerged after the lakes had been dried up. As for these mesas, their unique landforms came from the 1997’s fossil of ancient elephant, are unearthed at mesas within Luobubo area. 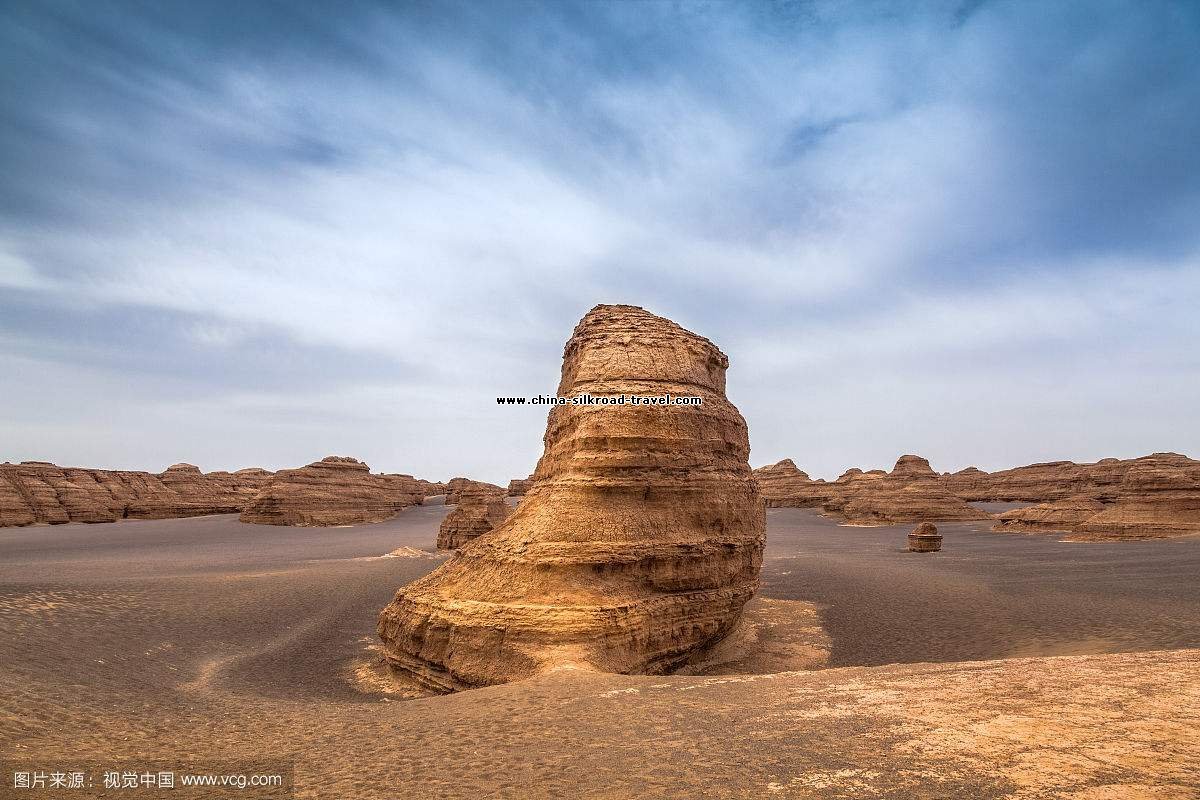 The distance of loess-colored Yadan landforms measures 25km from east to west, and about 5km wide from south to north as well as over 10m higher than the floor is. Towers, pavilions as well as the birds and beasts of various shapes can come into view while looking into the distance. There are entitled imaginable and fair-sounding names of “general’s service cap”, “cook heralding the break of a day”, “opening fire with artillery”, “hell’s gate”, “finding the moon from the seabed”, “fleet going into battle”, “bear forest”, “peacock princess”, “Pisa leaning tower”, “sit in meditation” and “lion roaring”, etc. Extraordinary rocks, serried and perilous peak ever change and result in the thoughts flashing across one’s mind, just as a vast floating aerodrome floated on the boundless sea freely. The ancient Silk-road is in the north of these Yadan landforms and Kumutage Desert in the south of it. Wandering through the “high streets and back lanes” in this “castle”, the demoniac sound caused by the movement of both wind and airflow can be heard ghastfully. The name of “demoniac town” just comes of it. The people look negligible while wandering into this community created by the nature where no flower, grass and bird can be seen. The scores of wide gaps formed naturally in this landform of over 100km² in area face both south and north just as thoroughfares. The various Yadan landforms on both sides look like the “residential areas” of various architectural shapes in big cities. They can’t be matched for placidity. The tall and big Yadan mesas stand same as rows of towering buildings. It’s not only like an ancient great large city buy also a huge and mysterious labyrinth. This multicolored art world is the masterpiece produced by the sand blown by wind in desert and is extraordinary as if done by the spirits. Its grandeur and spectacularity could never be matched by any other artworks.