Post Time:2018-12-29 Views:
The history of Qinghai Moslems can be dated back to the Tang Dynasty more than 1,000 years ago. By the 11th century, hundreds of Arab and Persian merchants had settled in Xining city. Group after group of soldiers from the Western Districts recruited into the Mongol Army were located in Qinghai after 12th century. During Ming and Qing dynasty, many Moslems were shifted from other places for the protection of the country. They settled down and intermarried with the local Moslems so that other Moslems moved in and formed Moslem community in Qinghai province.
During the first period of the Yuan Dynasty (1271-1368), Gtup Lanban A’bud Rahman, a descendent of Mohammed, the Prophet, arrived in Qinghai to preach. When he died in Xining, Solomon, the king of Xining ordered the construction of a tomb for him on Phoenix Hill outside the city and the erection of the gravestone in his memory. The Tomb has been kept in good condition throughout the last 700 years by collecting great respect from the Moslems in Qinghai province.
Although Moslems in Qinghai speak Chinese, they have kept many Arabic and Persian words in their vocabulary. They generally use the Chinese script, but the language of Salars in Qinghai belongs to the Turkic group of the Altaic language family. To learn Arabic is regarded as a point of pride for many of the Huis and Salars. Moslems in Qinghai are all sincere believers of Islam and stick to the “Five Pillars” of wisdom. More than 1,000 mosques are scattered across the province, the oldest and most magnificent one being the Dongguan Grand Mosque in Xining. 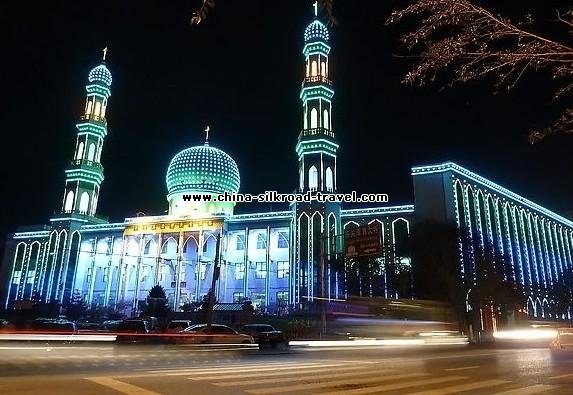 The Dongguan Mosque is on Dongguan Avenue, an area which is mostly inhabited by Moslems in Xining City. It is recognized together with Huajue Mosque in Xi’an of Shanxi, Qiaomen Mosque in the 4 largest mosques in northwest China. Primarily built in 1380 during the Hongwu Period of the Ming Dynasty, it has a history of 600 years, with an area of 11,940 square meters (14,282 square yards). The meters and can hold 3,000 people. The two double-storied buildings balance it entirely on both sides of the main hall. These buildings are the marvelous sight with its eaves and arched and colorful decorated pillars.
The front gate of the mosque is impressive and is bordered by two graceful minarets. Behind the gate is an open courtyard. Gray brick walls and a green roof with upturned eaves can be found in the main building (the Hall) with traditional Chinese palace style. The two secondary buildings stand harmoniously and symmetrically on the north and south. This mosque is one of the most famous of its kind in northwest of China, including the main Hall, side buildings and the front of the main Hall.