Home > China Tours > Xinjiang Tours >
Summary: Southern Xinjiang Travel to experience the unique landscape, a large number of historical and cultural relics and folk customs, and the charming Silk Road is attracting more and more travellers to enjoy the authentic Uighur culture and the influence of the Silk Road.

We will arrange the airport transfer based on your flight arrival time, and check you into the hotel. Our guide will take you on a sightseeing tour of Urumqi, which means beautiful pastureland in Mongolian language. Urumqi is the largest city in China's western interior. we will visit Xinjiang Museum, Erdaoqiao Market & International Bazaar
Xinjiang Museum: The Xinjiang Regional Museum is a large integrated museum and a centre for the collection and study of cultural relics in Xinjiang.  The museum was built in 1953, featuring Uighur ethnic internal decor style and has an exhibition hall covering an area of about 7,800 square meters. There are more than 50,000 pieces of various kinds of cultural relics stored in the museum, among them are the ancient mummies represented by the “Loulan Beauty”, manuscripts in Chinese, Karosthi, Qiuci, Yanji, Tibetan, Uighurian and other characters prevailing in ancient western regions of China, as well as silk, wool, cotton and hemp fabrics and folk raiment, etc., all items of great intrigue. The 'Loulan beauty' mummy in particular is a well preserved mummy from 4000 years ago. It still has a reddish brown skin, thick eyelashes, charming large eyes, and long hair.
Erdaoqiao Market&International Bazaar: Here you will find a bustling market filled with fruits, clothing, crafts, knives, carpets, and almost anything that you can imagine. This is the largest bazaar in Urumqi, and is a place most welcomed by tourists, especially the ladies who will find they can buy some traditional Yugur cosmetics. On Sunday, there are more stalls and more goods to buy than any other day. The old streets around the bazaar are particularly worth seeing. 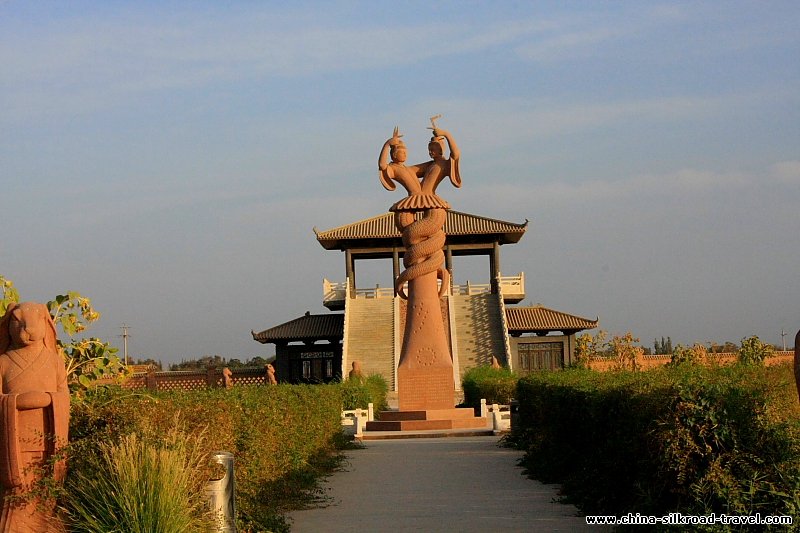 Today we will be visiting the Heavenly Lake, and we will take a boat cruise on the lake. then we will drive back to Turpan.
Heavenly Lake: High up in the Heavenly Mountain, or Tianshan, the Heavenly Lake is a long and narrow gourd-shaped moraine lake, 3400 meters long, about 1500 meters wide, 105 meters at the deepest point, with an average depth of 40 meters, covering an area of about 5.9 square kilometers. There are eight beautiful scenic spots in the lake area. These are “A Ray of Stone Gate”, “Dragon's Pool and Green Moon”, “Magic Needle for Guarding the See”, “Three Stones Bearing the Sky”, “the Snowcapped Southern Mountain”, “Pine Billows in Western Mountain”, “the Hanging Waterfall”, and the “Sea Peak's Sunrise”. 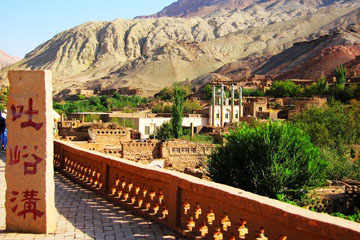 In the morning we will visit Jiaohe Ruined city, Karez Irrigation system, Sugong Minaret, drive back to Urumqi after lunch. and then be transferred to the airport and take the flight to Khotan
Jiaohe Ancient City Ruins: The city's name means 'River City'. It was founded during the first century BC and abandoned during the 15th century. It is located atop a steep cliff on a leaf-shaped plateau between two deep river valleys in the Yarnaz valley 10 km to the west of Turpan City. It runs northwest to southeast, 1760 meters long and 300 meters across at the widest part. The ruins include city gates, streets and lanes, government office, temples, domestic houses, cave houses, wells, and an underground temple. It is part of the UNESCO World Heritage Silk Road Sites.
Karez Irrigation System: The ancient Karez Irrigation System, which is still used today, is a unique irrigation system in Turpan. It takes advantage of the slopes, draws the underground water to flow by itself to irrigate farmland. It consists of four parts: vertical wells, underground channels, ground canals, and small reservoirs.
Sugong Minaret: Located in Mura Village 2km to the east of the city of Turpan, the minaret tower was built in the 41st year of the long reign of Qianlong Emperor during the Qing Dynasty. It is the embodiment of the ancient architectural arts of the Uighur people. The body of the tower is cylindroid in shape, built with bricks arranged in various symmetrical patterns on the outer wall. The tower has 14 windows and a spiral staircase inside going to the top. 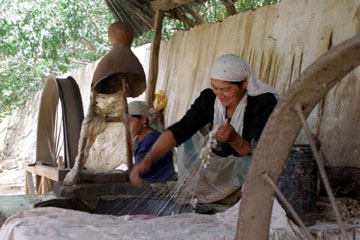 Today we will take a Khotan city tour, we will head to visit the Atlas Silk Workshop, The Site of Rewake Buddha Temple, Khotan Museum.
The Atlas Silk Workshop is open every day and demonstrate the entire process from cocoon to weaving. Which has a showroom where you can buy Atlas silk by the meter or made into scarves, bags, dresses and other items.
The Site of Rewake Buddha Temple: It lies in the Julakansiman desert, 40 kilometers away from the Yulong Kashi town of Luopu county in Hetian,the national key protected cultural relic.
Khotan Museum: Built at South Tanai Road, Khotan City in 1991, the museum has a floor space for exhibition of about 200 square meters. Besides wooden tablets, the main exhibition “Khotan Historical Relics Exhibition” displays potteries, wooden wares, textiles, sculptures and building components from ancient sites and tombs in Khotan area, totaling over 200 specimens. Among them the Kharosthi and Hotanese tablets, wool fabrics and various sculptures are of distinctive Khotan feature. They mirror the important position and role Khotan occupied and played on the southern Silk Road. 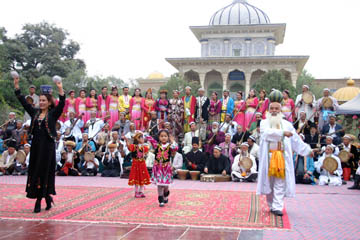 Morning breakfast at the hotel, then we will drive to Yarkent and Visit Yarkent Old Town, Yarkent King and Amanishan Tomb.
Yarkent Old Town It is the best preserved old town in Xinjiang, which is the main shopping center for the locals so that you can enjoy the authentic handicrafts for the local Uygers and know more about their daily life.
Yarkent King and Amanishan Tomb This city forms an oasis at the western end of the Taklimakan desert as a trade center. Mainly inhabited by Turkic-speaking Muslims, it has more than 120 mosques. The Uygurs are excellent at dancing. The "12 Mukams" (opera) is an epic comprising more than 340 classic songs and folk dances. After liberation, this musical treasure, which was on the verge of being lost, was collected, studied and recorded by Amannisha who is the concubine of Yarkant King.She died aged 34. 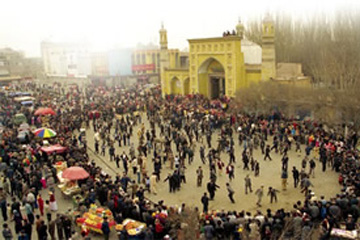 After breakfast drive to Kashgar and Visit Yingisha knife factory enroute. annd visit Handicraft street, Idgar Mosque upon arrival in Kashgar
Yingisha knife factory The are dozens of knife shops here(though prices are not much better than Kashgar)and its possible to visit the knife factory(xiaodaochang is Chinese)in the centre of town to see the knives actually being made. Each worker makes the blade, handle and inlays himself, using only the most basic of tools.
Id Kah Mosque: This is the largest mosque in China, and the most famous mosque in Xinjiang. The construction of the mosque started in the middle of the 15th century, and the mosque has gradually developed to its present size. The buildings of Id Kah Mosque look magnificent and solemn, and display the artistic styles of Islamic mosque architecture. The Mosque has an area of about 16,800 square meters, consisting of the Pray Hall, the Koran teaching Hall, the Corridor, the Arches and other buildings attaching to it. The Pray Hall of the mosque, which can hold 4,000 prayers, is supported by 140 carved wooden pillars.
Handicraft Street: Handicraft Street, or Zhiren Street, is a fascinating place showing the distinctive custom and culture of Kashgar, with many full-time handicraftsmen working on the street and hundreds of workshops and booths alongside. This street is an exhibition for traditional Kashgar and mid-Asian handicrafts. Copper, metal, porcelain, woodwork, jewellery and other goods are seen to be made here and you will marvel at the incredible devices like the wooden objects that prevent babies from wetting the bed. 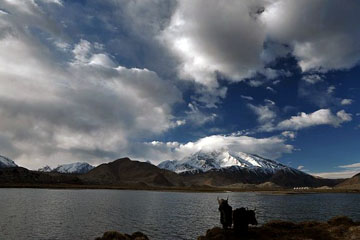 Morning drive on to Chinese Karakorum highway have a short stop in Opal Village. visit the Karakuli Lake enroute.
Karakorum Highway: The Karakorum Highway, or China-Pakistan Friendship Highway, is more than 1200 km long. It was opened to the public in 1979. Due to its high elevation (more than 4700m at its highest point) and the difficult conditions in which it was constructed, it is often called the 8th Wonder of the World. The Karakorum Highway traces one of the ancient Silk Roads. The Silk Road merchants then had to climb through the Wakhan Corridor, north of the high mountains of Karakorum and Hindu Kush, to get to India, Pakistan and onward to Iran. While you are on the Karakorum Highway, you can enjoy the scenery of Mt. Muztagh, and Taxkorgan, which in Persian language means stone castle. The brave Tajiks people had lived their nomadic life in Taxkorgan on the Pamir Plateau for more than 2000 years.
Karakul Lake: At an altitude of 3600m, this is the highest lake of the Pamir plateau, near the junction of the Pamir, Tianshan (Heavenly Mountain), and Kunlun Mountain ranges. Surrounded by mountains which remain snow-covered throughout the year, the three highest peaks visible from the lake are the Muztag Ata (7546m), Konur Tagh (7649m) and Kongur Tiube (7530m). The lake is popular among travelers for its beautiful scenery and the clarity of its reflection in the water, whose color ranges from a dark green to azure and light blue. There are two Kirgiz settlements along the shore of Karakul Lake, a number of yurts about 1 km east of the bus drop-off point and a village with stone houses located on the western shores. 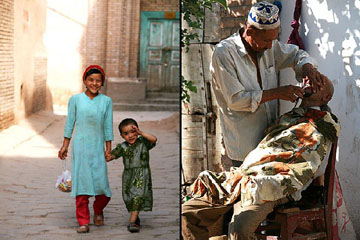 In the morning back to Kashgar and visit Old Town, Apak Hoja Tomb.
Apakh Hoja Tomb: This Mazar is the holiest place in Xinjiang for the Muslims, and an architectural treasure. Built in 1640, it is reminiscent of the Central Asian artistic style of Samarkand or Isfahan. The site is also known as the Xiang Fei (Fragrant Concubine) Tomb in memory of Abakh Khoja's granddaughter, Iparhan, who was the Fragrant Concubine of Emperor Qianlong of Qing Dynasty. A handsome blue-and-white tiled gate leads into the compound, which includes a small religious school and the Abakh Khoja family tomb. The latter is domed and faced with muti-color tiles. It is the most complete Islamic tomb dating from the beginning of the Qing Dynasty.
Old Town: Kashgar is an ancient city, and in walking the streets of its Old Town, one gets the sense of what this legendary Central Asian hub was like in the days when the Silk Road was at its zenith. 500-year old remnants of the city wall, narrow lanes and colorful multi-ethnic crowds combine to make Kashgar’s historic district a highlight of any visit to the city. Visit the small alleys to look at the characteristic Uygur residences. You will experience and enjoy the culture and history that has been retained in the small alleys and deep courtyards. In the alleys on platforms beside the residence you could marvel at the even more ancient primitive workshops for hand-made earthenware. Some 17 or 18 antique workshops have been restored.

After breakfast you will be transferred to the airport to take your flight to your destination.

* All the lunches and dinners and the breakfast when overnight on the train * Personal expenses. such as laudentry and tips to the guide and driver * other activities such as boating, camel riding ect