Tianshui——The Major Towns for Merchants To Visit and Cond

Post Time:2020-02-02 Views:
Situated in the southeast of Gansu Province. Tianshui was known as Qinzhou in ancient times. As a major town along the Silk Road, it was believed to be the original site where the Qin Tribe’s ancestors thrived during the Western Zhou Period. These Qin’s ancestors were good at animal husbandry, hunting and ranching. To award their extinguish contribution in ranching, Emperor Xiao of the Zhou Dynasty conferred the place to Feizi, head of the Qins, known as Qinying. In 221B.C. when Emperor Yingzheng, the first Emperor of the Qing Dynasty unified China, Qinzhou was officially established as an administrative unit. In the 3rd year of the Yuanding Period during Emperor Wu of the Han Dynasty (114B.C.), Qinzhou was known as Tianshui(heavenly water). The name originated from a lake situated west of the city. The lake was famous for its”stable water levels during all seasons, winter or summer, droughts or floods”. Ancients believed that this “wonderful lake water must have come from Heaven”.

After the opening of the Silk Road , Tianshui became one of the major towns for merchants to visit and conduct trade. Tianshui reached its prime time during the Kaiyuan Period of the Tang Dynasty and was known as the “Trade Center of All times”. In the long history of the ancient Silk Road, Tianshui played an important role as a gateway and a posthouse. According to the book the Biography of Monk Xuan Zang of Da Cien Temple, Monk Xuanzang traveled westward to India to worship Buddha and to bring back Buddhism scriptures, the monk stayed in Tianshui for one night. Stories about the monk and his pilgrimage to the west are still very popular in Tianshui nowadays. 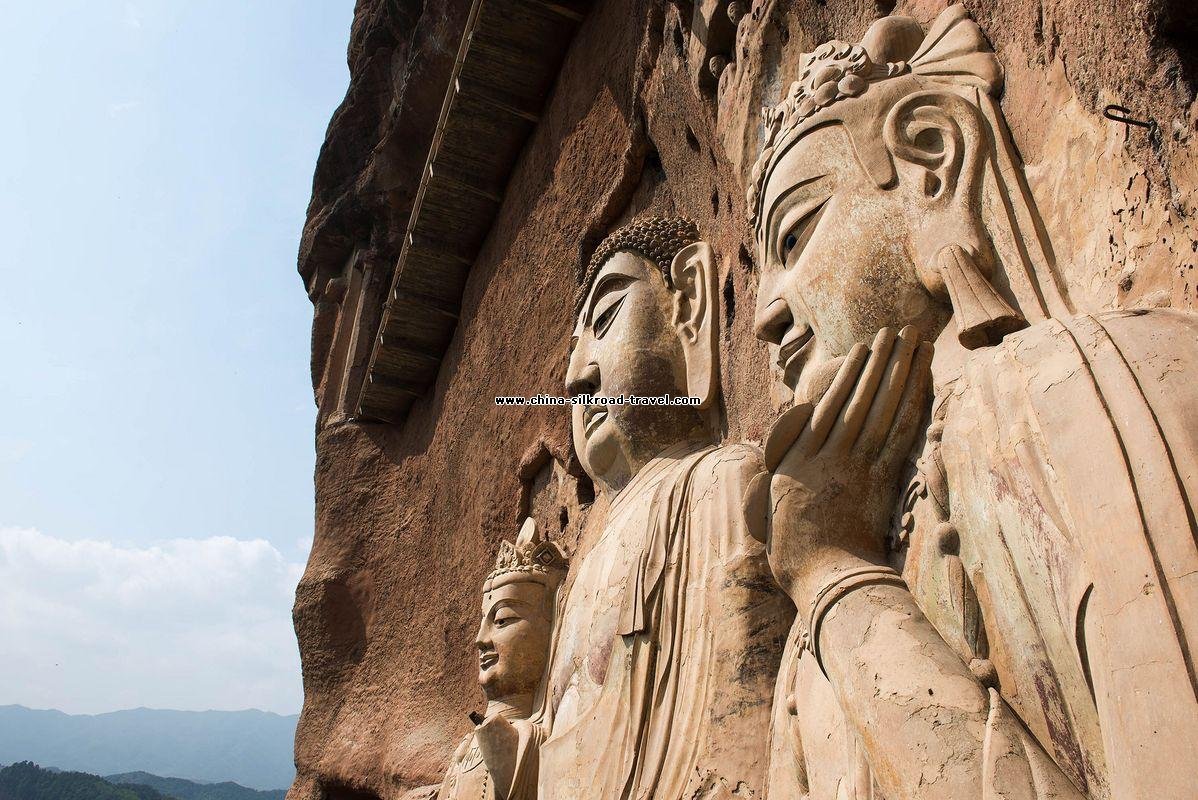 As one of the major cities along the ancient Silk Road, Tianshui has kept many precious memories of the eastward spreading of cultures from the Western Regions. Known as the famous “Oriental Sculpture Museum”, Maijishan Grottoes are located within the Tianshui territory. As one of the four major group grottoes in China, digging of the Maijishan Grottoes started by the Later Qin during the Northern and the Southern Dynasty Period, dating back more than sixteen hundred years. Now Maijishan Grottoes host one hundred and ninety-four caves with more than seven thousand and two hundred stone status and one thousand and three thousand square meters of mural paintings. Status carved are exquisite and of various styles, dating from the Northern and the Southern Dynasties to the Qing Dynasty. Apart from Maijishan Grottoes, there are also many other grottoes such as those at the Gansu valley of Daxiangshan, Huagai Temple, Waterfall Cave at Wushan, Wooden Ladder Temple and the Meditation Temple, all of which are located in the territory of Tianshui. Together they form a “Grotto Corridor” in the eastern section of the Silk Road.