Opening of the Silk Road

Post Time:2018-12-29 Views:
Chinese silk was introduced to the outside world as early as during the 5th - 6th century B.C. Archaeologists found scraps of Chinese silk in an old tomb dated 500 B.C. at Stuttgart, Germany. By 400B.C., Europeans began to learn about China through Chinese silk. In his historical works Book On history and Geography, the Greek historian Keta Pinchas referred to China as “Seres”, meaning “a country of silk ”. During a long period of time, due to the long distance and inconvenience of communication, only a few silk products could be shipped to the West, making them extremely precious and valuable.
According to records, once the Roman Emperor Julius Caesar (102 B.C. - 44 B.C.) wore a silk gown when he was watching an opera in the theater. When kings and ministers saw the dazzling silk gown , they couldn’t stop admiring it. The rarity of silk was only changed gradually after the opening of the world-renowned Silk Road. 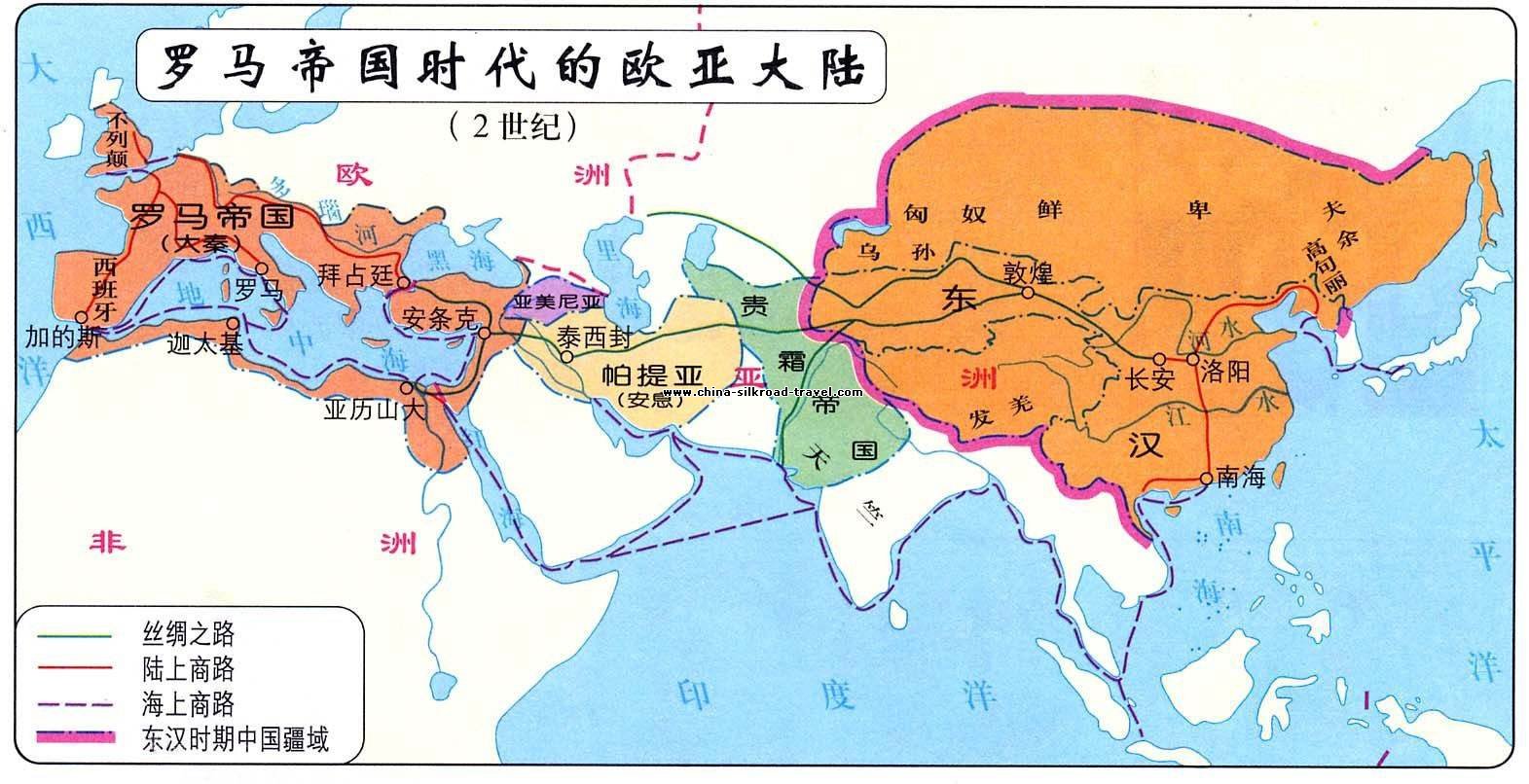 During the late Warring States Period and the ensuing Qin and the Han dynasties, the northern frontier of the Central Plains kingdoms were often subject to harassment by the northern nomadic Huns. Emperor Liu Bang , founder of the Han Dynasty, was once besieged by the Huns cavalry at Mount Baideng where he almost lost his life. Since then , in order to seek peace of the Central Plains, the Han rulers adopted a policy of pacification through marriage towards the Huns. They also sent all kinds of precious presents such as silk and cotton to the Huns. In 140B.C., Emperor Wu of the Han Dynasty ascended the throne. After a period of recovery, national strength was greatly enhanced with social stability and economic prosperity prevailing in the country. The Han Dynasty ruler began to pursue a pro-active foreign policy and set the goal to defeat the Huns in order to maintain peace and stability in the norther frontier. Having learned that the Huns had killed the head of the Dayuezhi kingdom in the Western Regions and forced its people to leave their land , Emperor Wu of the Han Dynasty planned to form an alliance with Dayuezhi to make pincer attack against the Huns.
In order to implement this plan , Emperor Wu dispatched Zhang Qian as his special envoy to the Western Regions in the 3rd year of the Jiayuguan period (138B.C.). Leading a contingent of more than one hundred men, Zhang Qian set off from Longxi(present-day South Lintao of Gansu) for Dayuezhi. He was unexpectedly detained by the Huns on the way. Head of the Huns put Zhang Qian on exile on the grassland of Mobei where he spent more than a decade. Although Zhang Qian eventually married a Huns girl and had children with her. He never forgot his errand. Finally he found an opportunity to escape from the Huns and continued his journey to the West. He passed the Dayuan and Kangqu kingdoms and finally arrived at Dayuezhi which had already settled down in the Amu River basin area. As the Dayuezhi people were already leading a stable and peaceful life on this lush land, they didn’t want to launch wars against the Huns.
Having failed to lobby Dayuezhi into an alliance with the Tang, Zhang Qian embarked on his return journey to his home country after one year. Unfortunately he was again detained by the Huns. A year later, civil unrest broke out in the Huns. Zhang Qian took the opportunity and escaped. In 126 B.C. Zhang Qian returned to Chang’an, capital ciy of the Western Han Dynasty, thirteen years since he got on the mission. Of the more than one hundred men he led on the mission, only one person returned with him. Zhang Qian reported to Emperor Wu on the mission and what he saw and heard in western countries. The Emperor was immensely impresses by the rare and precious products of western counties that he decided to establish friendly ties with them. 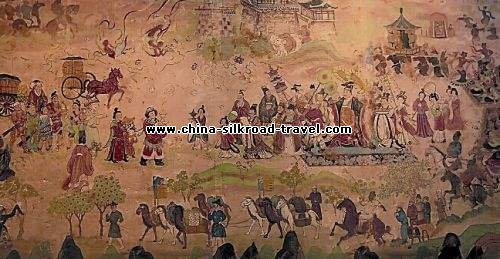 In 119 B.C. Zhang Qian was dispatched to the Western Regions on a second mission. Leading a contingent of more than three hundred men and bringing with them a large quantity of gold, silk, cattle and sheep, Zhang Qian first arrived in Wusu(prensent-day southeast of Lake Balkhash), an important hub in the Western Regions. Zhang Qian then sent his deputies to countries such as Dayuan, Kangqu(present-day southeast Kazakhstan), Daxia, Anxi(present-day northeast Iran), Shendu(ancient India) where they were warmly received, and where they conducted large scale exchange of goods. In 115B.C. Zhang Qian returned to Chang’an. Dayuan, Anxi and some other western region countries sent envoys to travel together with the Han envoy.
Zhang Qian’s two missions to the Western Regions opened the East-West trans-Asia inland transportation routes. Between 104B.C. and 101B.C. Western Han set up four counties in the Western Regions: Jiuquan, Zhangye, Wuwei and Dunhuang and formally incorporated the Western Regions into Western Han’s territory. This had also provided a safe and reliable channel for East-West cultural exchange. Since then, Han Dynasty envoys and merchants constantly traveled to the Western Regions to carry out political and commercial activities. Similarly caravans from Western Regions traveled long distance to the Central Plains. A phenomenon featuring unprecedented East-West interaction and prosperity emerged. Large quantities of Chinese silk were shipped to Central Asia, West Asia and Europe through this transportation artery. In archaeological findings unearthed in recent years, large quantities of ancient Chinese silk were found in the vast areas between Chang’an in the East and the Mediterranean in the West, reflecting the prosperity of East-West trade in ancient times.