Post Time:2018-12-27 Views:
To the southern end of Taklamkan Desert there had been an oasis, through which the Niya river quietly flew from the Kunlun Mountains.By the river lived the ancient people of the kingdom of Jingjue. The dense forests along the river as if told the prosperity of those years.
According to the history book Han-shu(History of Western Han Dynasty),Jingjue was a small country of a population of only 3360 and an army of 500. In the early period of Eastern Han Dynasty, Jingjue and other small countries gradually went on the decline and fell into decay. For the country of Jingjue in the depth of Taklamkan Desert, the greater threat was the deteriorating of environment. The irrigation system became ineffective; the quicksand ran rampant; and the original oasis disappeared altogether. Jingjue faced a severe test for its survival. Just as Lolan, Niya and Jingjue were both destined to the the extinction.
In the January 1901, Stein for the first time made an exploration to the territory of Hotan along the southern section of the Silk Road and discovered ruins of an ancient city. He excavated the building sites and found lots of valuable relics. The unearthed cultural relics showed, the country of Jingjue experienced a long period of prosperity. It was enriched by the influences of both Eastern and Western culture as trade exchanges of the Silk Road. It had many magnificent buildings with fine sculptures. Some of the inscribed wooden slip with Chinese characters were related to land business contracts, which indicated the strong impact of Han Culture and reflected the effective control from the central Chinese authority over the administrative affairs in this area. 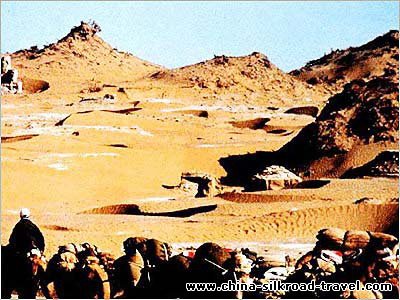