Treasures of the Kizil Thousands-Buddha Caves

Post Time:2018-12-27 Views:
On the vast and beautiful land of Xinjiang there are many ancient treasures of art. Among the most outstanding are the Thousand Buddha Caves dotted along the Old Silk Road. Traveling westward form Urumqi along the middle route of the Silk Road at the southern foot of the Tianshan Mountain to Kuqa and the Baicheng area. One can see may man-made stone caves on the cliffs. These are the famous Qiuci grottoes, of which the Kizil Thousands-Buddha Caves rank first in terms of number of caves, and size and richness of murals.
Located on the cliffs of the Qoltak Mountain seven kilometers southwest of Kizil town in Baicheng country, the Kizil Thousands-Buddha Grottttoes have 236 caves. The Muzat River flows in front of the caves. A limpid spring and green field make a very pleasant scene. When summer comes, flowers of all sorts bloom in a riot of colors. In autumn，rich fruit hang on the tree branches. What a treasure island in the wilderness.
The Kizil grottoes are the most ancient Buddhist caves in China. Starting in the 3rd century, the carving of the grottoes lasted several hundred yeas. The were deserted in the 14th century. Of the 236 caves, most are in Qiuci style, with wide entrances and a central column dividing the cave into two chambers, front(main) and rear. Most of the front chambers have longitudinal vaulted ceilings. On both sides of the central column are paved paths. One may walk along the path around the central column clockwise, the ritual route of Buddhist worshippers. Generally, on the front wall of the main chamber is a statue or a color portrait of Sakyamuni(Gautama Buddha, the founder of Buddhism), and on the side walls are murals depicting his life story, and how he attained Buddha hood through self-cultivation. The rear chamber has murals describing Sakyamuni’s nirvana, his disciples wailing in mourning, the cremation of his body, division of his relics, and construction of his stupa(burial tower). Narrow and dark, the rear chamber has a mystical atmosphere. The ancient artists designed the layout this way to highlight the main subject and strengthen the artistic effect. In addition to Qiuci-style caves, there are also some square vaulted ceiling. 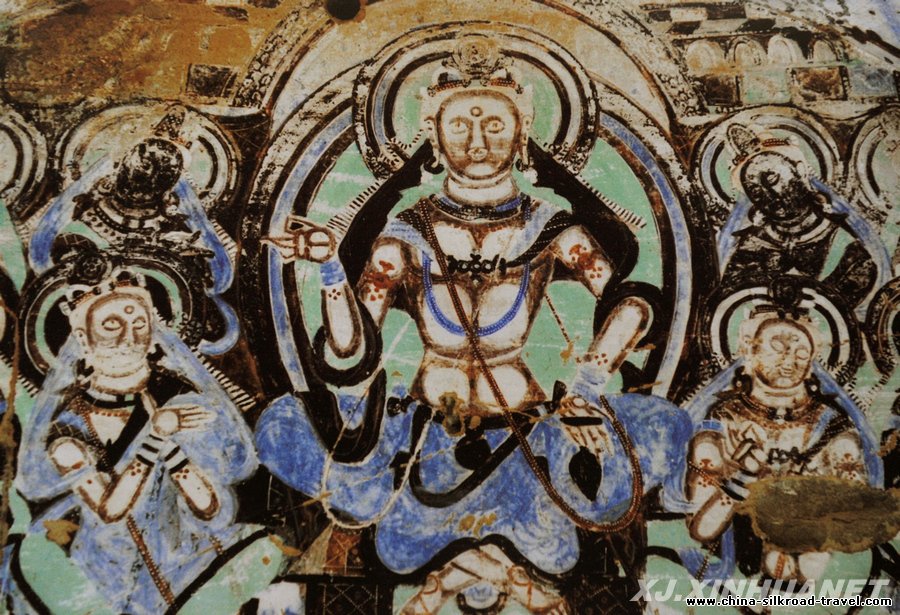 Most of the sculptures in the Kizil grottoes are painted clay sculptures, though there are also some wooden and stone ones. Unfortunately, all the statues are damaged. It the rear chamber of a cave renovated in 1973, one can see three fragmentary statues. One is reclining Buddha, the other two are standing Buddha. The head of the reclining Buddha is broken, and the two standing ones are whole only below the waist. Nevertheless, from these fragmented statues one can see the features of Qiuci figure Sculptured: strong, muscular and graceful. The robes stick to the body，as if dampened．Even the folds of the cloth are vividly sculptured．
The artistic gems of the Kizil grottoes are the exquisite murals，mostly depicting Buddhist stories of Jataka；Sakyamuni’s ascetic practices before he attained nirvana. Buddha’s magic power，believers’worship, and so on．
At the center of the vaulted cei1ing of the front chamber is painted a star atlas．Around it are picture stories of Jataka in rhomb-bus-shaped  frames linked  by mountain designs depicting how Sakyamuni in his previous incarnation sacrificed himself to save others，practiced benevolent deeds and abstained from evil．The Pigeon
King burns himself to attain nirvana；Renfa Dragon rescues the venomous Dragon；Elephant King sacrifices himself to help the poor; Bear King donates food to save the starving；Tortoise ferries people on the back；Monkey king sacrifices himself to save his Subjects；King Sivi cuts his own flesh to trade for the life a pigeon；a single—horned beast carries a girl to her home city：Prince Sattva offers himself as food to save a hungry tiger．．．．
These picture stories have vivid, distinctive features，and constitute a school of their own in Buddhist art．Later, the story pictures were simplified, and gradually replaced by sitting Buddha. They took the form of a sitting Buddha inside a pagoda, and then finally evolved into thousand-Buddha portraits painted on the vaulted ceiling of the grottoes.