Post Time:2018-12-29 Views:
In many Mogao Caves, there are images of flying Apsaras who are believed to be incarnations of heavenly gods Gandharvas and Kinnara in Buddhism. Their role and responsibility include : playing music and dance for Buddha, emitting fragrance, and offering precious flowers. Based on traditional Chinese legends about immortals, the flying Apsaras images were developed by integrating some features of exotic Buddhist art, the most prominent being the employment of clouds. With floating dresses and ribbons, the Apsaras soar up in the sky in all kinds of postures, vary beautiful and graceful.
The earliest existing flying Apsaras images at Mogan Grottoes were painted during the Northern Liang Period (401-439). With a crown on the head and half-naked upper body, these Apsaras present a slightly stiff bending posture. By Western Wei Period (535-556), the image of flying Apsaras changed into one of a topless beauty, with ribbons draping from the shoulders and a long skirt. The image also wears a necklace. The image began to comply with the then Chinese people’s aesthetic preferences:a slender body, delicate features, holding a variety of musical instruments in their slim fingers. The surrounding petals and auspicious clouds present a peaceful scene. Images of the Flying Apsaras became more beautiful and decorative during the Sui Dynasty (581-618). Flying Apsara images depicted during the Tang Dynasty (618-907) are featured by a raised head, upward tilted feet, and dancing skirts and ribbons. With a smiling face, the Apsaras scatter flowers in the sky. They are so light and agile, full of vigor and vitality. They not only embody the Buddhism atmosphere, but also mirror the confidence and optimism of people during the Flourishing Tang Period. 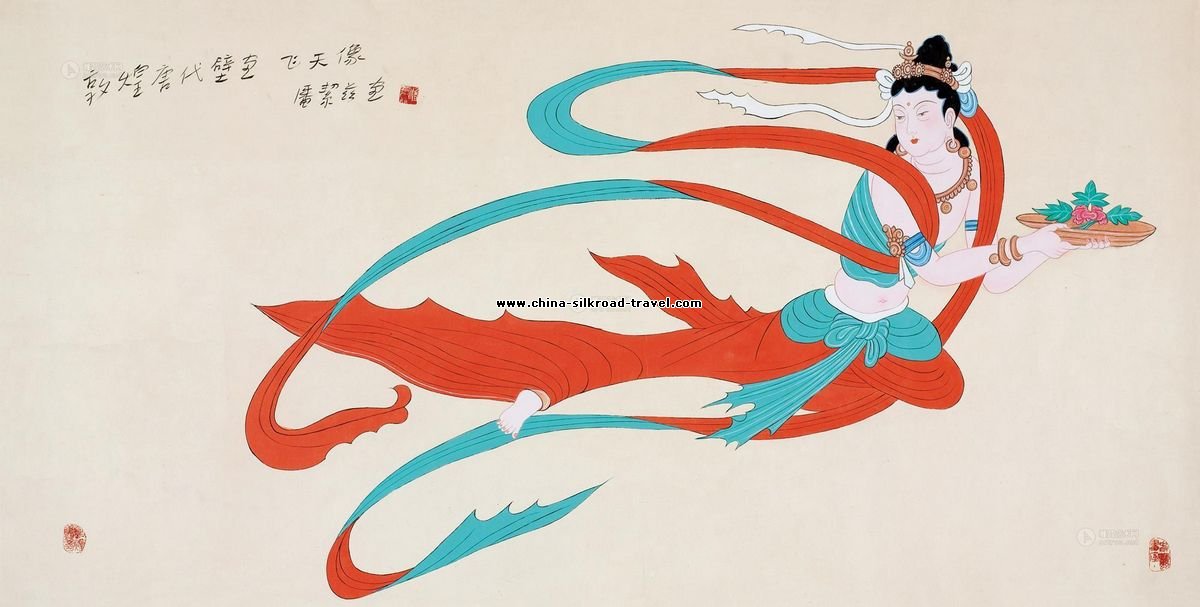