Home > China Tours > Kashgar Tours >
Summary: Many people who take the silk road tour from Kyrgyzstan to Uzbeksitan.and Kashgar is the must place for them to pass by,our 5 days Kashgar tour include the border transfer and the highlights of the Kashgar.Kashgar city tour, Karakul Lake and the Taxkorgan county which will let you have a great Kashgar holiday and our professional work willl help you out of any problems of the custom.our highly suggest you arrive Kashgar on Friday.but the border is not opened during weekend and festival.

We will meet you at the border and clear up the custom issue then head to Kashgar,check into the Hotel Upon arrivals. The rest of the day is free for you to explore this ancient city along the silk road.
Accomodation: Kashgar
Meals:  Dinner
. 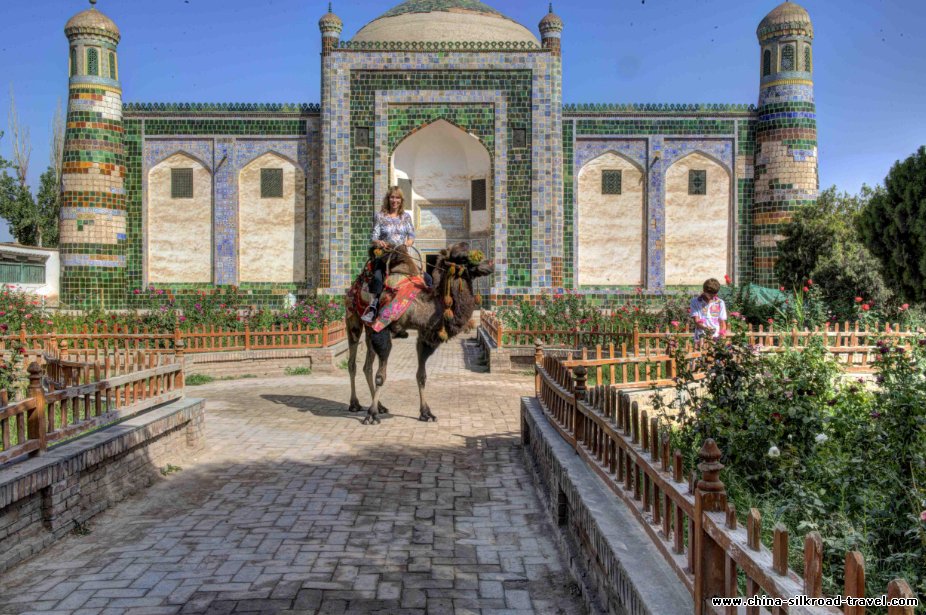 Liz from USA in front of Apak Hoja Tombs

After breakfast in the hotel and then you will start the Kashgar city tour. your first stop will be the Idigar Mosque,  Apak Hoja Tombs, Old Town, Handicraft Street.
Id Kah Mosque: This is the largest mosque in China, and the most famous mosque in Xinjiang. The construction of the mosque started in the middle of the 15th century, and the mosque has gradually developed to its present size. The buildings of Id Kah Mosque look magnificent and solemn, and display the artistic styles of Islamic mosque architecture. The Mosque has an area of about 16,800 square meters, consisting of the Pray Hall, the Koran teaching Hall, the Corridor, the Arches and other buildings attaching to it. The Pray Hall of the mosque, which can hold 4,000 prayers, is supported by 140 carved wooden pillars.
Apakh Hoja Tomb: This Mazar is the holiest place in Xinjiang for the Muslims, and an architectural treasure. Built in 1640, it is reminiscent of the Central Asian artistic style of Samarkand or Isfahan. The site is also known as the Xiang Fei (Fragrant Concubine) Tomb in memory of Abakh Khoja's granddaughter, Iparhan, who was the Fragrant Concubine of Emperor Qianlong of Qing Dynasty. A handsome blue-and-white tiled gate leads into the compound, which includes a small religious school and the Abakh Khoja family tomb. The latter is domed and faced with muti-color tiles. It is the most complete Islamic tomb dating from the beginning of the Qing Dynasty.
Old Town: Kashgar is an ancient city, and in walking the streets of its Old Town, one gets the sense of what this legendary Central Asian hub was like in the days when the Silk Road was at its zenith. 500-year old remnants of the city wall, narrow lanes and colorful multi-ethnic crowds combine to make Kashgar’s historic district a highlight of any visit to the city. Visit the small alleys to look at the characteristic Uygur residences. You will experience and enjoy the culture and history that has been retained in the small alleys and deep courtyards. In the alleys on platforms beside the residence you could marvel at the even more ancient primitive workshops for hand-made earthenware. Some 17 or 18 antique workshops have been restored.
Handicraft Street: Handicraft Street, or Zhiren Street, is a fascinating place showing the distinctive custom and culture of Kashgar, with many full-time handicraftsmen working on the street and hundreds of workshops and booths alongside. This street is an exhibition for traditional Kashgar and mid-Asian handicrafts. Copper, metal, porcelain, woodwork, jewellery and other goods are seen to be made here and you will marvel at the incredible devices like the wooden objects that prevent babies from wetting the bed.
Accomodation: Kashgar
Meals: Breakfast, Lunch and Dinner 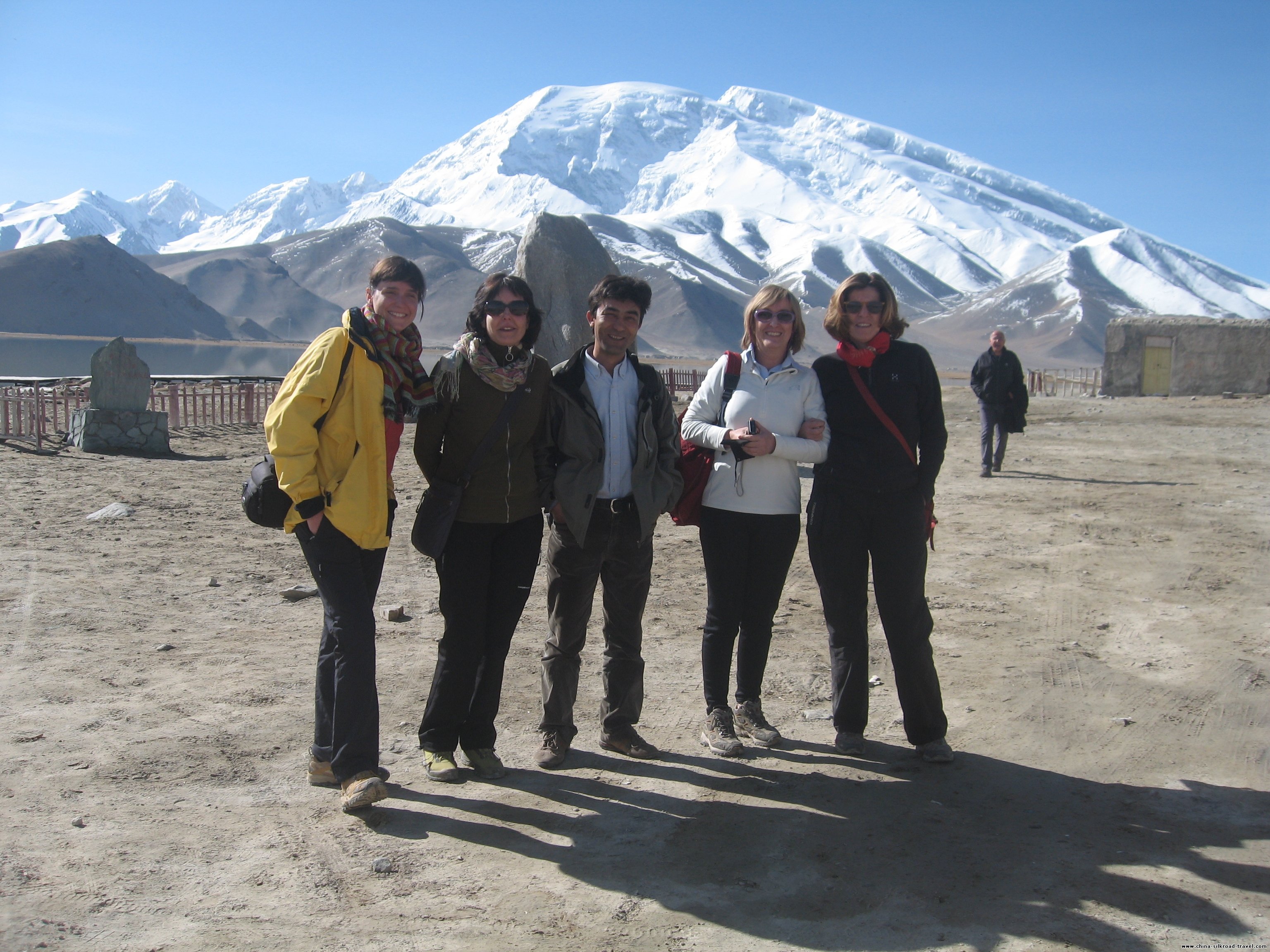 Our France Group by the side of  Karakul Lake

Morning breakfast at the hotel, then we will be visiting the Sunday Bazaar, after that drive on the China and Pakistan highway to visit the Karakul Lake and enjoy the Pamir landscape. drive back to Taxkorgan for rest.
Sunday Bazaar: This is called “Sunday” bazaar but it is open daily, even though it is busiest on Sundays. Streets near this big market are jammed with farmers and buyers arriving by donkey cart, truck, bicycle, horseback, ute, motobike, or on foot, with their animals. It is loud, lively and cheerful as they arrive, eat breakfast, set up their animals and check out the action. Cattle, sheep (they definitely look different), goats, donkeys, horses have their own sections. Sellers show off their animals as “good eaters” (most go as livestock, not meat). The entire experience is fascinating and fun.
Karakorum Highway: The Karakorum Highway, or China-Pakistan Friendship Highway, is more than 1200 km long. It was opened to the public in 1979. Due to its high elevation (more than 4700m at its highest point) and the difficult conditions in which it was constructed, it is often called the 8th Wonder of the World. The Karakorum Highway traces one of the ancient Silk Roads. The Silk Road merchants then had to climb through the Wakhan Corridor, north of the high mountains of Karakorum and Hindu Kush, to get to India, Pakistan and onward to Iran. While you are on the Karakorum Highway, you can enjoy the scenery of Mt. Muztagh, and Taxkorgan, which in Persian language means stone castle. The brave Tajiks people had lived their nomadic life in Taxkorgan on the Pamir Plateau for more than 2000 years.
Karakul Lake: At an altitude of 3600m, this is the highest lake of the Pamir plateau, near the junction of the Pamir, Tianshan (Heavenly Mountain), and Kunlun Mountain ranges. Surrounded by mountains which remain snow-covered throughout the year, the three highest peaks visible from the lake are the Muztag Ata (7546m), Konur Tagh (7649m) and Kongur Tiube (7530m). The lake is popular among travelers for its beautiful scenery and the clarity of its reflection in the water, whose color ranges from a dark green to azure and light blue. There are two Kirgiz settlements along the shore of Karakul Lake, a number of yurts about 1 km east of the bus drop-off point and a village with stone houses located on the western shores.
Accomodation: Taxkorgan county
Meals: Breakfast, Lunch and Dinner 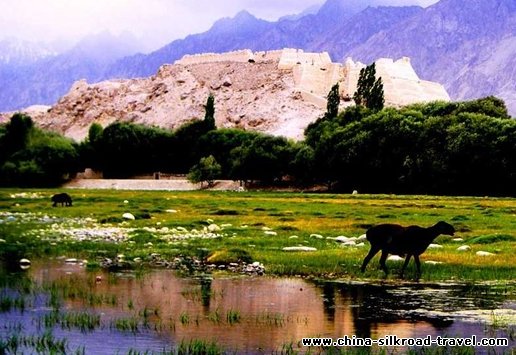 After breakfast visit Stone Fortress,and walk around the pastureland to see Local Tajiks customs.Afternoon back to Kashgar.
Stone fortress: Located on a tableland northeast of the county seat of Taxkorgan Tajik Autonomous County, it covers an area of 100,000 square meters and consists of ruins of city and temple of the Tang Dynasty era and a Qing Dynasty government office. The temple occupied the eastern part of the city. In the western and southeastern parts are found ruined houses. On the ruins of the temple the Pulitin Office of the Qing Dynasty was built. The city is oval in shape, and the city walls were built with sun-dried bricks on stone foundation. It is 1285 meters in circumference outside.
Accomodation: Kashgar
Meals: Breakfast, Lunch and Dinner

After breakfast in the hotel, you will head to the Torugart/Irkestam Pass, ayou will arrive the border around 11am. our Chinese guide will help you clear up the issues on the custom and then your guide from Kyrgyzstan will be waiting for you.
Accomodation: Kyrgyzstan
Meals: Breakfast, Lunch boxes

√ All the entrance fee through out the itinerary(Shuttle bus in Kanas,Naraty,Bayinbuluk and Heavenly Lake are included)

√ Travel insurance (please note: only the International travel agency have the insurance service)

√ Meals listed in the itinerary

√ Two bottles of mineral water per person per day

* All the personal expensed and tips to the guide and driver

* Some activities such as boating, horse riding and camel riding ect