Home > China Tours > Top China Tours >
Summary: In just 9 days you can explore China's most famous sites such as the Great Wall,the Forbidden City in Beijing,the Terracotta Warriors of Xi'an and the cosmopolitan city --Shanghai.See the dramatic changes happening in China and compare the Old and Modern China for yourself.

International flight on your own arrangement. Once arrive in Beijing,be met and transferred to your hotel. Feel free at leisure for the rest of the day.
Accommodation : In Beijing

Today we will do a Beijing city tour with our nice guide. the first site we will visit for today is Tiananmen Square, which is the largest city public square in the world. It has great cultural significance as it was the site of a number of important events in the Chinese history, including the proclamation of the People’s Republic of China on October 1, 1949. Thereafter, bus transfer to the next stop The Temple of Heaven, which is located in the southern part of Beijing, and has been one of the most sacred places for the whole country for more than five centuries. The complex was visited by the Emperors of the Ming and Qing dynasties for annual ceremonies of prayer to heaven, and is the largest one in Beijing among several royal altars to Heaven, Earth, Sun, Moon and other deities or symbolic forces of Nature And in the afternoon, we are going to visit the Chinese royal palace Forbidden City, Also called Palace Museum, the Forbidden City is recognized as the most magnificent and splendid palace complex in China and one of the five world-famous palaces, along with the Palace of Versailles in France, Buckingham Palace in England, the White House in United States, and the Kremlin in Russia. After the visiting, we will enjoy the traditional Chinese Kongfu Show in the evening.
Accommodation : In Beijing 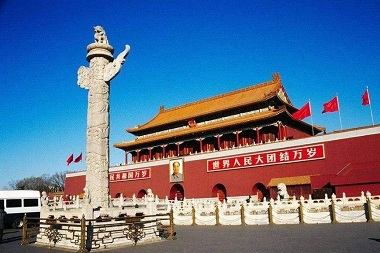 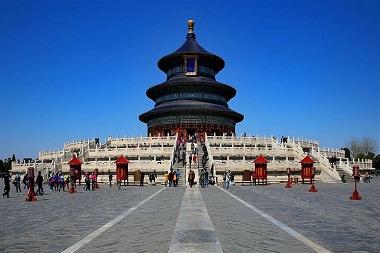 Breakfast at the hotel and then we are going to the famous and beautiful Mutianyu Great Wall, Mutianyu Section is called as the Majestic Pass on Precipitous Mountains, which is one of the best-preserved parts of the Great Wall, it is also the longest Great Wall in China.  After a few hours of exploration, we will down from the Great Wall and travel to The Ming Tombs, which is also known as the “13 Tombs”, this is a collection of mausoleums of the 13 out of 17 of the Ming Dynasty emperors. The tomb that can be visited is that of Emperor Wanli, who reigned from 1537 to 1620, and his two empresses. Unearthed in 1956, this is literally an underground palace located 27m below ground surface. Thereafter, we will drive back to downtown for dinner and overnight stay. On the way, you can take a photo stop at the 2008 Olympic Site to see the Bird's Nest National Stadium and Water Cube Aquatic Centre.
Accommodation : In Beijing 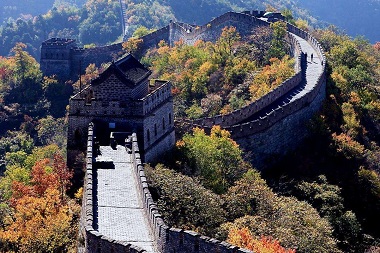 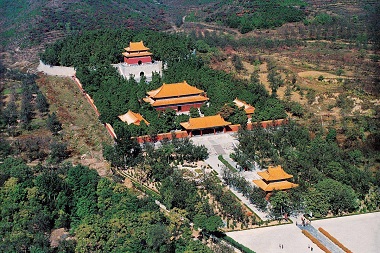 Tour will begin from the Summer Palace, Situated in the Haidian District northwest of Beijing City, the Summer Palace is 15 kilometers from central Beijing. Being the largest and most well-preserved royal park in China, it has greatly influenced Chinese horticulture and landscape with its famous natural views and cultural interests. It has long since been recognized as 'The Museum of Royal Gardens', here you can spend a few hours to explore the garden or take a boat trip if you are interested. then continue to explore Beijing Hutong, It is said that the real culture of Beijing is the culture of the Hutong and Courtyards. That is so true. Hutong is a Mongolian word meaning water well. At nine meters wide, it is the term given to a lane or small street that originated during the Yuan Dynasty (1271–1368). These hutongs, or alleyways, are formed by lines of traditional courtyard residences. Many neighborhoods were thus formed, and the word hutong now refers to these neighbourhoods of alleyways. They have become representatives of local culture, thus it is the first choice for people who would like to learn about the local history and culture.
After the visiting, you will be transferred to the train station and take a high-speed train to Xi'an.
Accommodation : In Xi'an 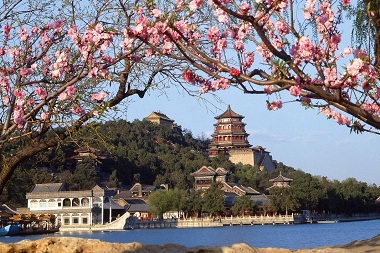 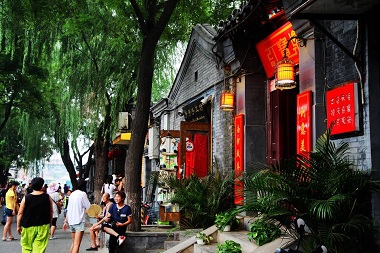 As the starting point of Silk Road, Xi'an has a profound history and culture. Drive to the countryside of the Xi'an city about 1hrs, we will visit the most impressive historic site Terracotta Warriors which are the most significant archeological excavations of the 20th century. Work is ongoing at this site, which is around 1.5 kilometers east of Emperor Qin Shi Huang's Mausoleum in Lintong, It is a sight not to be missed by any visitor to China. Believe you will be amazed by the culture and history to get a feeling back to Qing Dynasty during the 3hrs experience. （No flash when take photos) Lunch will be in the local restaurant, we will continue the sightseeing to the Big Wild Goose Pagoda built to house Buddhist scriptures collected by a Chinese Monk. Big Wild Goose Pagoda has 7 floors in total. Architecture is traditional Chinese style decorating with some Buddha statues. Tourists can see variety of Buddha statues and see the whole Xi’an city at the top floor. and then explore the Muslim Street, Relax with free walking along the street tasting he local delicious food and exploring the local lifestyle.
In the evening, you will have a time to enjoy the famous Tang Dynasty Show, the show presents the palace dances and songs from the Tang Dynasty (618AD-907AD) when Xian was the capital of China.
Accommodation : In Xi'an 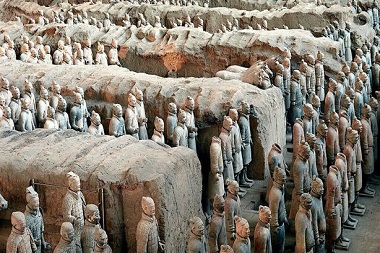 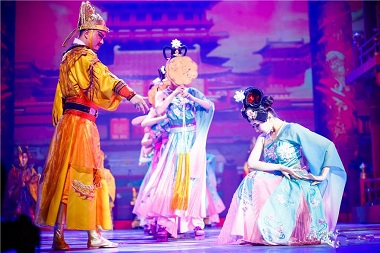 Today we will go to the Shaanxi Province Museum, This provincial museum is one of the major museums in China. It holds numerous unearthed cultural artifacts from within the Shaanxi province as well as the rest of China. The newly built modern building recreates Tang-dynasty architecture and successfully symbolizes the great extent of Shaanxi history and its remarkable culture. Afterwards, drive you to the Ancient City Wall, This is the most complete city wall that has survived in China as well being one of the largest ancient military defensive systems in the world. you will enter the city wall through the ticket gate. Standing on the wall, you can't use your eyes to judge how long the wall is. you can walk around the city wall or experience the cycling.
Afternoon, transfer to the airport and catch the flight to your next stop Shanghai.
Accommodation : In Shanghai 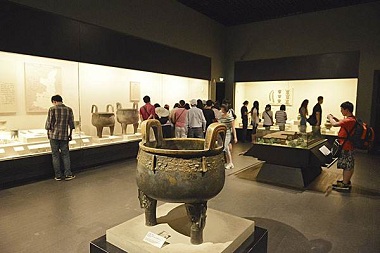 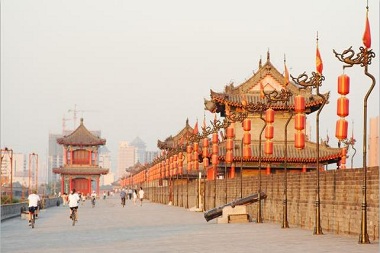 Today we will spend a whole day to explore the beatiful water town Zhouzhuang, which is located in Kunshan, Jiangsu. Zhouzhuang is the one of the six ancient town in the south of Yangtze River. It was named a famous historical and cultural town in China in 2003. With its long history and unique humanistic landscape, Zhouzhuang has become a treasure of Chinese water culture and Wu local culture. Today you will have enough time to explore this beautiful ancient water town. Evening driving back to Shanghai for overnight stay.
Accommodation : In Shanghai 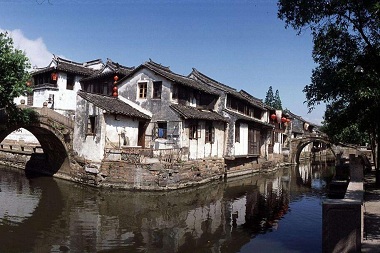 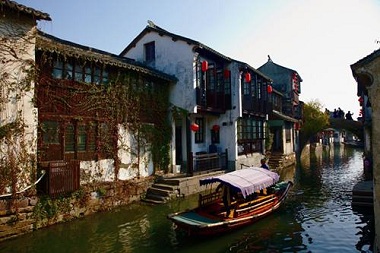 Today we will start our journey from Shanghai Museum, which is located the center of Shanghai in people's square, it is a large museum of ancient Chinese art. here you will learn more about the history and culture. Coming out from the Shanghai Museum, we will pay a visit to Yu Garden, a classical garden, which was built in Ming dynasty. Black tiles and white walls establish a nonchalant and simple keynote . The dainty style makes one feel comfortable, and each exquisite window lattice is telling its own story, serves the record of the past delicate life. Every piece of roof tile is passing a sort of affection of pride and memories.Next, we will travel to Jade Buddha Temple, A beautiful Buddhist temple constructed in 1882 housing two spectacular, imported, jade, Burmese Buddhas.
Afternoon, stroll around the Bund, This symbol of Shanghai is known worldwide as the “gallery of international architecture”. Its assortment of buildings standing along the Huangpu River varying in height, color and architectural design make it one of the most magnificent skylines in the world. enjoy the scenery of Huangpu River, At the Baidu Bridge in the center of Shanghai City, Huangpu River flows together with the Wusong River (i.e. Suzhou River) and finally flows into the East China Sea.
Accommodation : In Shanghai 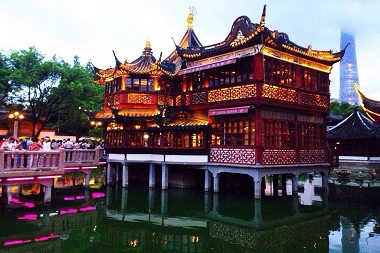 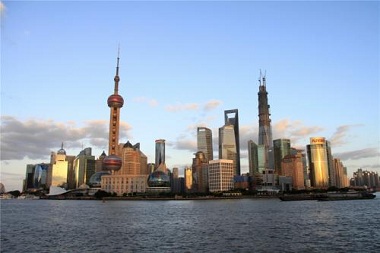 Today you will end your enjoyable China trip and transfer to the airport to catch your flight. wish you have a pleasant journey home!

1 All lunches and dinners listed every day
2 Personal expenses, tips to the guide and driver.
3 Some activities such as boating, camel riding, culture show etc.
4 Flight arrive in Beijing and leave from Shanghai