Arrive and transfer to hotel ,rest for acclimation. 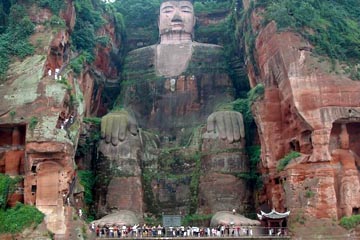 After breakfast take a scenic drive to the world's largest Buddha Statue(71m high)at Leshan County,walk down to the foot of the Buddha and hope on a river cruise to appreciate its fill stature and splendor from the river.Tonight sample a local specialty dinner.
Leshan Buddha Sculpture:The Giant Buddha of Leshan (aka Dafo) is the tallest stone Buddha statue in the world, carved out of a cliff face by an 8th-century monk in southern Szechuan province. The Giant Buddha overlooks the confluence of the Minjiang, Dadu and Qingyi rivers and faces the sacred Mount Emei (with which it shares its World Heritage status).History, Construction on the Giant Buddha began in 713 AD. It was the idea of a Chinese monk named Haitong, who hoped that the Buddha would calm the turbulent waters that plagued the shipping vessels traveling down the river. His plans were not just supernatural - the enormous amount of rubble carved away from the cliff would be deposited in the river, altering the currents and calming the waters. 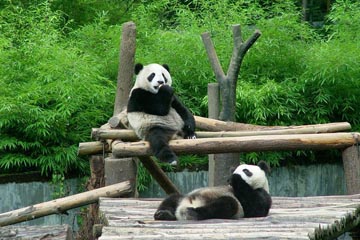 After breakfast visit the fascinating Giant Panda Breeding and Research Centre to learn morn about these amazing endangered animals and the programs that are being implemented to protect them.Later explore bustling teahouses and take a stroll in the lively People's Park before being flying to Lhasa.
Giant Panda Breeding and Research Centre:Zoos, scientific research centers, breeding centers, or semi-protected areas work together to maintain a self-sustaining population of a given species. This population may serve as a hedge against extinction of the species, as well as a reservoir for improved understanding of its natural history. The Chengdu Panda Base is an example of a scientific institute engaged in research towards conservation. Our goal is not only to provide technical support for scientific research on wild pandas, but also to increase the wild population through improved management and, ultimately reintroduction of individuals into areas from which the populations have declined. Research at the Chengdu Panda Base focuses on the advancement of wildlife conservation in China. 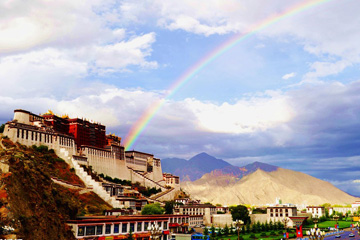 Visit the world-famous architectural wonder-the Polata Palace,which towers over the entire mountains and the lake below is simple gorgeous.This is where the Dalian Lama spent his winters.You will also visit the Jokhang Temple,which is known as the most sacred place in Tibet-thousands of Pilgrims from all over Tibet come here to pay homage. Finally enjoy wandering through a market at Barkor Circuit.Sample a Tibetan specially dinner.
Polata Palace:Situated on the Red Hill of central Lhasa, Potala Palace is the highest ancient palace in the world, reaching 3,767.19m (12,359.55ft) at the topmost point.Potala named after a holy hill in South India is a Sanskrit word meaning "Abode of the Avalokitesvara (Buddha of Mercy)." Legend has it that in the 7th century, to greet his bride Princess Wen Cheng of the Tang Dynasty (618B.C. - 907B.C.) of China, the then Tibet King Songtsen Gampobuilt a 9-storey palace with a thousand rooms up on the Red Hill and named it Potala. Later, with the collapse of the Songtsen Gampo Dynasty, the ancient palace was almost destroyed in wars.
Jokhang Temple:The Jokhang Temple, situated in the centre of old Lhasa, was originally built in 647 AD. The site is said to have been chosen personally by the wife of King Songtsan Gampo, the Tang Princess Wencheng. It was built by craftsmen from Tibet, China and Nepal and thus features an intriguing mix of architectural styles.Jokhang Temple is the spiritual center of Tibet and the holiest destination for all Tibetan Buddhist pilgrims.
Barkor Circuit:Located in the old area of Lhasa City, Tibet, Barkhor Street is a very ancient round street surrounding the Jokhang Temple and the Tibetan people are always proud of it. 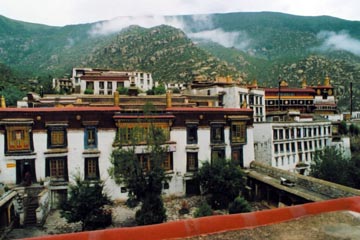 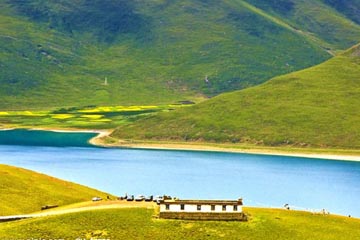 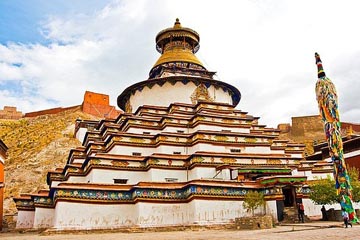 Enjoy one of the most magnificent buildings in Tibet-the Kunbum Pagoda,housing beautiful paintings ,ancient murals and Buddhist images by Nepalese craftsmen.Drive to Shigatse,the seat of the Panchen Lama and is also the second largest city in Tibet.Visit the history and culturally significant Tashihunpo Monastery,where the Panchen Lama,who ranks close to Dalai Lama,keeps his official residence.And then returning to Lhasa.
Kunbum Pagoda:Jiangba, the jamrese of a Thousand Hands and a Thousand Eyes in the monastery. There is a hall of arhat made during the Ming Dynasty.Another name of the monastery is Pelkor Chode Monastery.The arhats are so vivid that they look very much alive. Besides the monastery is the world famous 9-storey100,000-Buddha Pagoda (Kunbum Pagoda.It stands 32 metres highly, has 108 doors, 77 Buddhist chambers and countless shrines. Enshrine in the Pagoda are 100,000 statues of Buddha.
Tashihunpo Monastery:Founded by the First Dalai Lama in 1447, Tashihunpo Monastery is one of the six big monasteries in Tibet. It is the seat of the Panchen Lama, the second ranking person in the Gelugpa Tibetan Buddhist hierarchy, after the Dalai Lama. The monastery houses the tombs of Panchen Lamas and a 22.4-meter statue of Maitreya Buddha. Tashihunpo remains popular among the Tibetans, as they carry on coming here on pilgrimage.Standing on the entrance of Tashihunpo, you can see the grand buildings with golden roofs and white walls. The remarkable Tangka wall which is nine-floor high, displays the images of Buddha on the 14th, 15th and 16th of May every year following the Tibetan Lunar Calendar.

Experience the world's highest for amazing journey across the Qinghai -the Tibetan Plateau.Sit back and take in the spectacular landscape along the railway. 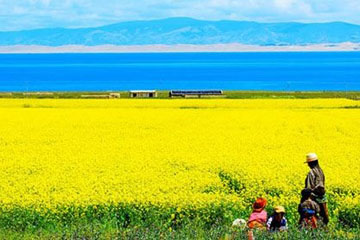 Arrive at Xining,the crossed between the Silk Road and Tibet.See the largest inland salt lake-Qinghai Lake in China and be amazed by its vast expansive misty and wavy blue water,surrounded by never-ending outstretching grassland and filed.Watch amazing birds at a nearby Bird Island sanctuary ,which is one of China's eight key bird nature reserve.
Qinghai Lake :From ancient times to the present, whenever people mention Qinghai Lake they think of 'green lake', 'blue sea' or 'fairyland', because of the marvelous natural beauty reflected on it. As to the area, it is the largest inland and salt water lake in China. It is no exaggeration to say that Qinghai Lake is a miracle that is endowed by a deity. Outside, he circles the lake with four continuous mountains and extends broad grassland at the foot of them. Inside, like a master baker, he decorated the water with many little islands.
Bird Island :Bird Island is an undeveloped barrier island located at the southwestern edge of the North Carolina coast, situated between the Town of Sunset Beach and the Little River Inlet in South Carolina. The Reserve site encompasses 1,481 acres consisting of approximately 135 upland acres and over 1,300 acres of marsh, intertidal flats, and sub-tidal area.The Reserve site represents excellent examples of barrier communities with several occurrences of rare species. The following barrier island biotic communities are present: upper beach, dune grass, maritime dry grassland, maritime wet grassland, maritime shrub thicket, maritime shrub swamp, brackish marsh, salt shrub, salt flat, and salt marsh. The most notable species of the island are nesting loggerhead sea turtles and seabeach amaranth, a plant of the foredone area. Both species are listed as threatened by the federal and state governments.

After breakfast transfer to the airport and take the flight to your hometown.