Great Kashgar City tour, start the tour from visit the Sunday Bazaar(if today is Sunday), then visit the Id Kah Mosque , Apak Hoja Tomb, Handicraft Street and the Old Town.
Sunday Bazaar: This is called “Sunday” bazaar but it is open daily, even though it is busiest on Sundays. Streets near this big market are jammed with farmers and buyers arriving by donkey cart, truck, bicycle, horseback, ute, motobike, or on foot, with their animals. It is loud, lively and cheerful as they arrive, eat breakfast, set up their animals and check out the action. Cattle, sheep (they definitely look different), goats, donkeys, horses have their own sections. Sellers show off their animals as “good eaters” (most go as livestock, not meat). The entire experience is fascinating and fun.
Id Kah Mosque : This is the largest mosque in China, and the most famous mosque in Xinjiang. The construction of the mosque started in the middle of the 15th century, and the mosque has gradually developed to its present size. The buildings of Id Kah Mosque look magnificent and solemn, and display the artistic styles of Islamic mosque architecture. The Mosque has an area of about 16,800 square meters, consisting of the Pray Hall, the Koran teaching Hall, the Corridor, the Arches and other buildings attaching to it. The Pray Hall of the mosque, which can hold 4,000 prayers, is supported by 140 carved wooden pillars.
Apakh Hoja Tomb : This Mazar is the holiest place in Xinjiang for the Muslims, and an architectural treasure. Built in 1640, it is reminiscent of the Central Asian artistic style of Samarkand or Isfahan. The site is also known as the Xiang Fei (Fragrant Concubine) Tomb in memory of Abakh Khoja's granddaughter, Iparhan, who was the Fragrant Concubine of Emperor Qianlong of Qing Dynasty. A handsome blue-and-white tiled gate leads into the compound, which includes a small religious school and the Abakh Khoja family tomb. The latter is domed and faced with muti-color tiles. It is the most complete Islamic tomb dating from the beginning of the Qing Dynasty.
Old Town : Kashgar is an ancient city, and in walking the streets of its Old Town, one gets the sense of what this legendary Central Asian hub was like in the days when the Silk Road was at its zenith. 500-year old remnants of the city wall, narrow lanes and colorful multi-ethnic crowds combine to make Kashgar’s historic district a highlight of any visit to the city. Visit the small alleys to look at the characteristic Uygur residences. You will experience and enjoy the culture and history that has been retained in the small alleys and deep courtyards. In the alleys on platforms beside the residence you could marvel at the even more ancient primitive workshops for hand-made earthenware. Some 17 or 18 antique workshops have been restored.
Handicraft Street : Handicraft Street, or Zhiren Street, is a fascinating place showing the distinctive custom and culture of Kashgar, with many full-time handicraftsmen working on the street and hundreds of workshops and booths alongside. This street is an exhibition for traditional Kashgar and mid-Asian handicrafts. Copper, metal, porcelain, woodwork, jewellery and other goods are seen to be made here and you will marvel at the incredible devices like the wooden objects that prevent babies from wetting the bed. 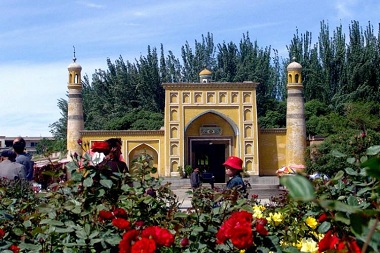 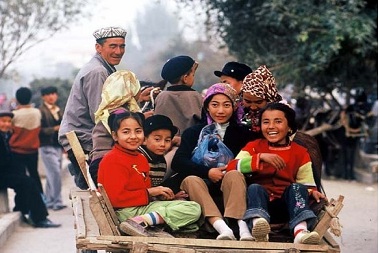