the capital of Uzbekistan and Central Asia's premier metropolis, betrays little of its 2,000-year history as a crossroads of ancient trade routes. This modern city of 2.1 million people, the fourth largest in the CIS after Moscow, St. Peterburg and Kiev, holds much to arrest the curious traveler, from imposing squares, monumental architecture and fine museums, to the mud-brick maze of the old Uzbek town, autumn colors on dappled poplar lanes and the sweet spray of fountains on burning summer days.

The Tashkent oasis lies on the Chirchik river, within sight of the foothills of the western Tian Shan. Mountain meltwater feeds the river, in turn feeding the Syr Darya on whose middle reaches once lay the principality of Chach. Archeologists battling myth and legend call its first capital Kanka, a square citadel founded between the fifth and third centuries BC, eight kilometers from the Syr Darya. The architecture and sculptures are an organic part of the city's landscape and give Tashkent a cheerful air.

Head out from the Hotel Uzbekistan to leafy Amir Timur Square where a statue of Tamerlane on horseback. The most eccentric reminder of tsarist Tashkent is the former residence of Grand Duke N.K. Romanov(1850-1917), a first cousin of Tsar Nicholas II , exiled here in 1881 for exploits involving the crown jewels. Ahead sprawls Independence Square flanked by public buildings and walls of fountains. Besides the globe stands the former Government House, first built in 1931 and now hoising the Bakhor Concert Hall and the Alisher Navoi Library. Part of it survives at the library's rear, where the Ankhor Canal, one-time border of old and new Tashkent, meanders through a verdant swimming and leisure area.

One of the remarkable building in Tashkent is "Alisher Navoi Opera & Ballet Theatre" was completely constructed in 1947 by Japanese prisoners of war. The head architect Shchusev designed the yellow-brick hybrid of classical and Central Asian styles. Beyond the marble lobby are six foyers dedicated to Tashkent, Samarkand, Bukhara, Termez, Khiva and Fergana, all thickly dressed in stucco carving, themes motifs and murals from Navoi's poetry.

Tashkent's citizens are justifiably proud of their metro, Central Asia's first and bursting with decorative intent. Construction began in 1972 and extension of 30 kilometers makes metro the most convenient way to traverse the city and cool escape from melting avenues. Cotton is a common motif, from the mosaics of Pakhtakor( cotton workers), to the boll lamps of Uzbekistan; cupolas drip with gold leaf at Alisher Navoi, while Kosmonavtlar offers ceramic discs of cosmonauts floating in a spectral sea.
In 1974 the State Fine Art Museum of Uzbekistan received the collection established in 1918 from works confiscated from Grand Duke Romanov, an exiled cousin of the tsar, who in turn had probably stolen them from St. Petersburg's Hermitage. There are European paintings and sculpture from 15th- 20th centuries, notably Russian icons from Novgorod, the paintings of Soviet artists like Benkov and Volkov in the second floor of museum. Uzbek arts dominants the ground and first floors: ceramics from the ninth to 17th centuries; tile fragments from Samarkand, Shakhrizabs, Bukhara and Khiva.Museum of Applied Arts is a popular for its setting as for its many beautiful exhibits. Every day new guests come to the caravanseray. Among the store of 19th-20th century embroidery are many items essential to a bride's dowry: suzaine wall-hangings and variants such as oi-palyak, lunar sky, and gulkupra, flower blanket.
Old Tashkent is the famous part of the city . Buried deep in institutes and factories north of Navoi's museum and street are three mausoleums dating back to the 15th century. They are only survivors of a Muslim complex of mosques and madrassah founded in the 14th century with the burial of local saint Sheikh Khawendi Tahur( popularly Sheikhantaur). The largest is that of Yunus Khan, descendent of Genghis Khan, grandfather of Babur and sometime khan of western Mogulistan. The institute's chaikhana, nestling beneath Yunus Khan, displays beautiful Khivan wooden columns and 19th century ceiling from Tashkent's old town. 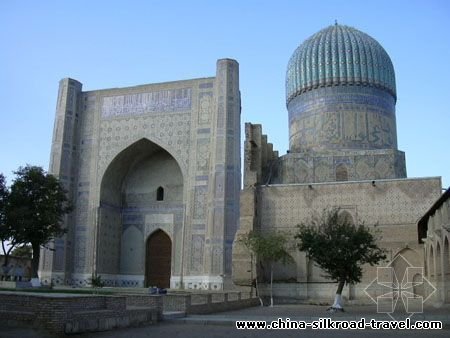 In a small garden just to the east is the Sheikhantaur mausoleum, rebuilt in the 19th century according to the original design. Behind is the Kaldirgach bey mausoleum, built for a ruler of Mogulistan early in the 15th century and noted for its 12-sided pyramidal dome, spherical on the inside. Emerge from Chorsu Metro into reassuringly Central Asian bazaar bustle. Here , at the Chorsu(four ways) crossroads, merchants through the ages have traded the wares of diverse lands. Iski Juva is old tower marked the ruler's fortress. The great two-storeyed dome is an extension of the local tradition of labyrinth of covered stalls offering protection from summer's fierce rays.
Opposite the Hotel Chorsu is the Kukeldash Madrassah, built in the mid-16th century by the ruler's vizier, Kukeldash. After secular use as a Soviet warehouse and museum, the madrassah is reasserting a religious role as money from neighbouring mahalla restores the collapsed second storey, corner minarets and brightly tiled facade. Friday prayers take place on the entrance platform, near the ruined 15th-century Jummi Mosque, constructed by influential Islamic Khodja Akrar (1404-1492). This area formerly marked the city centre or Registan (?sandy place'), where public executions were held.
The Khast Imam Square and the Barak Khan Madrassah, founded in the 16th century by descendent of Tamerlane who ruled Tashkent for the Shaybanid dynasty. The ornate facade of blue-tiled mosaic and Koranic inscription conceals a rose garden courtyard and 35 hujra. Tourists must request permission to view the interior, for this is the administrative centre of the Mufti of Uzbekistan, the head of official Islam in the Republic. Directly opposite Barak Khan is the Tellya Sheikh Mosque,first built in the same era and now employed as the city's chief Friday Mosque. Male visitors may petition the imam for the chance to see its beautiful Islamic Library.
Khalklar Dustligi metro delivers you to yet another monstrous square, centred on the monumental marble of the Palace of People's Friendship, a 4,000 seater for political and musical displays. In front is a statue of the blacksmith Shamakhmudov and the 15 orphans from European Russia who he and his wife adopted during World War II.In the most countries people eat out for the pleasure of sampling better-than-everyday cuisine.
In Uzbekistan, however , you will often be reminded that staying in is a safer culinary bet. You can now combine the two by visiting the home restaurants of Chagatai bazaar. Long renowned for exceptional shashlik, the bazaar air is pungent with grilled meat by 4am. A number of fresh dairy products are available to complete your breakfast. After 10 am the grillers return home and open their doors until 10 pm. Three blocks north of the Hotel Uzbekistan is Alaisky Bazaar, a cornucopia of fruit, vegetables, sheep innards and Lada parts. Spring and summer coat stalls with cherries, raspberries, figs and melons.
For guests who prefer korean food there are several restaurants in Tashkent: Sam Yang, Seoul, New World. For pizza try also New World Bakery & Pizza, Zam Zam Pizzeria, for turkish food - Gold Wing, Effendim , Mir cafe, italian - La Strada, Allegro, Rossinni. Tashkent?s nocturnal options have expanded with a number of nightclubs : Lucky Strike Bar, Aladdin, Prestije, Juliana.For making the trip more interesting try heli-skiing or trekking, windsurfing or simply a lakeside barbecue, head to the capital's resort, the footholls of the western Tian Shan around Chimgan, 80 kilometres northwest of Tashkent. The road from Tashkent follows the Chirchik river past hydroelectric dams and the modern city of Chirchik. Chimgan is Uzbekistan's winter-sports center. Skiers flock to the three-kilometer-long Kumbel track. Hire equipment is available for early arrivals. From January to April heli-skiers may drop onto virgin snow at 3,000-plus meters for 5-10 kilometers descents.