The traditional founder of Bukhara has always been the Persian prince Siyavush who built a citadel here shortly after marrying the daughter of Afrosiyab in Samarkand, but its growth has for centuries depended largely upon its strategic location, uniquely placed on the crossroads to Merv, Gurganj, Herat, Kabul and Samarkand.. The early town was taken by the Persian Achaemenids in the sixth century BC, by Alexander the great in 329 BC and by the empires of the Hephalite and the Kushan. By Sogdian times the town was known as Numijent, later to be renamed after the Sanskrit word for monastery, vikhara and was a major city in the Sogdian confederation but it was still merely a younger brother to the thriving merchant towns of Paikend, Romitan and Varaksha until the storm of Islam Arose. 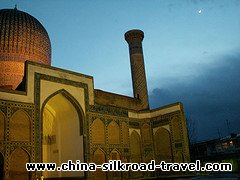 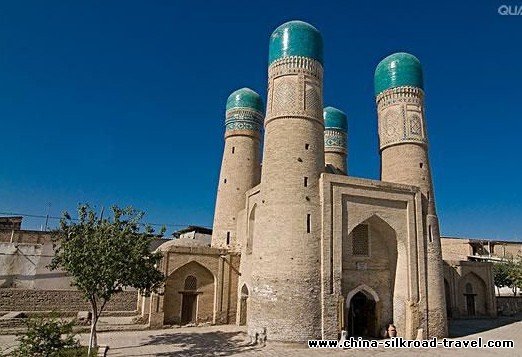 The cultural layer on the territory occupied by city is more than 20 meters. It was exactly the depth where archaeologists have discovered the remnants of residential and public dwellings along with coins, house-wares, tools and jewelry dated 4 BC. Therefore, the age of Bukhara itself is 2500 years. Back is Ancient times it was a part of one of the Central Asia regions-Sogd, where troops of Alexander the Great have passed.  Home to the rulers of Bukhara for over a millenium, the Ark Fortress is as old as Bukhara itself. The founding of the original fortress is blurred in antiquity, but it was certainly the focus around which developed the medieval town.

Fortress Ark is considered to be Bukhara's Center, where the rulers and their servants live. Since 7 AD have been built mosques and minarets, madrassahs and cultural complexes. Over thousands years the Samanid's Mausoleum keeps amazing the people with its beauty, perfect harmony and genius design. The architectural complexes Poi-Kalyan, Laybi-Haus, Gaukushon and others are the best examples of medieval architects' creations.

The Chashma Ayub mausoleum stands in fortress-like austerity, almost devoid of decoration, a few hundred meters from the Ismael Samani Mausoleum. It consists of four domed chambers, each built during a different epoch and topped in a different style of cupola to form a remarkable visual spread of architectural history. From the Tok-i- Zargaron, the bustling commercial heart of the city snaked southwards through a street of shaded stalls, fortress caravanserais and domed bazaars to form one of the most colourful and cosmopolitan trading grounds in the Islamic world.

From dawn to dusk an endless procession of supercilious camels, heavily-laden donkeys and creaking arbas crashed through bursting streets in a chaotic exchange of insult and barter.With buildings spanning 1000 years of history and a thoroughly lived-in city center which hasn't changed much in two centuries, Bukhara is one of the best places in Central Asia to catch a glimpse of ancient Turkestan. After Samarkand's luminous mosaics, Bukhara's universal brown is a bit of an optical anti-climax. Most of the city center is an architectural preserve - and includes a massive, royal fortress, plenty of former madrassas (religious colleges), a number of ancient public baths and the remnants of a once-vast market complex.

Bukhara has been a center of Sogdiana for about 2000 years. Islam has brought spires of minarets and domes of mosques into architecture of Bukhara. One of the highlights of the city is a domed bazaar near Bukhara's main religious complex: a small square where the massive tiled portals of a mosque and a functioning madrasa, face each other. Between them towers the unusual free-standing Kalyan minaret, its honey-colored bricks laid in protruding and receding patterns to produce a texture like that of an elaborately knitted sweater. Built in 1127, the minaret rises to a height of 45 meters. When Bukhara was at war - which was much of the time - it was used as a watchtower.

The Residency of the last Emir of Bukhara - Sitora Mokha Hasi was built in European style but it is decorated with oriental ornaments. The other attraction is a small complex of one mosque and four minarets, named Chor-Minor. Each minaret is different from the others but together they form a Single harmonious complex, as four wives of the architect who built this complex. According to the legend all his wives were very friendly and that was reflected in the minarets.Sightseeing In the center of the city lie monuments dating from the tenth to the seventeenth century.

Located on the western edge of the old city is the Tomb of the Samanids, built in the tenth century and featuring exquisite brick work. Moving to the east, the next key site is the Ark, the main fortress and governmental center of the Emirate of Bukhara. Within walking distance of the Ark is the Kalyan ensemble, featuring the enormous 12th-century Kalyan mosque and minaret (the mosque was severely damaged by Genghis Khan and restored in the early sixteenth century) and the Mir-Arab madrasa (Islamic school), which was one of only two functioning madrassas in the Soviet Union. Nearby are the 14th-century Ulugbek madrasa and 17th-century Abdulaziz Khan madrasa.

Finally the attractive square known as Lyabi-khauz, which includes a 16th century and a seventeenth century madrasa, a caravanserai (inn for caravans) which dates from the same period, and a reflecting pool. Along the way are the numerous "trading domes" and other locations where local artisans peddle their wares.Many of these sites are undergoing extensive restoration in advance of the 2500th anniversary celebration. While some short car trips may be required during the tour to save time, much of it can be done on foot. The Summer Palace of the Emir of Bukhara is located several minutes out of town by car. Samanid MausoleumIn the 10th century, Bukhara became capital of a large state under the Samanids, descents from local (Tajik) aristocracy. The only survival of the Samanid Bukhara, the 9th-10th-century Samanid mausoleum in the north-west of the town, was hidden until recently behind the overgrown tombs of the cemetery. Today it has been restored and a garden planted around it. The earliest burial of its kind, it marks the beginning of a new trend and, although rather modest in size (10x10 meters), has an exceptionally monumental character. It speaks of dignity, tranquility, security.

Kalyan MinaretA masterpiece of medieval architecture in Bukhara famous throughout Central Asia. It embodied to perfection the idea of the Central Asian minarets as a round tower with an inside spiral ladder, somewhat wider toward the bottom and topped by a clerestory aperture and a stalactite cornice. Its bulk (136,8 feet high), solid but well-proportioned, was embroidered with ten decorative belts of relief brickwork and interim borders made conspicuous through on-rib manner of bricklaying. Half-way up its height one can read the name of the ruler, Arslan Khan, and the date, 1127. The Kalyan is visible many miles from Bukhara. Bazaar DomesBazaars, important centers of urban life in the medieval East, were a system of roofed streets. Being no exception, Bukhara is divided into two unequal parts by a trading avenue which has cupolas at the crossing points. Today, one can see only three of the five original cupolas from the 16th century, namely: Toki Sarrafon (the Dome of Shroffs), Toki Tilpak-Furushon (the Dome of Milliners), and Toki-Zargaron (the Dome of Jewellers). To an outside observer, these domes look like a cluster of huge bubbles on the brick roof of the building; the interior presents an ever- changing interplay of lines and facets.

Ark CitadelThe 20-meter-high fortress of the Ark looms over the north-west of Bukhara. This bulwark of Bukhara's last emirs was built in the beginning of the 1st millennium. Since the 7th century, the Ark has been the heart of the feudal city with its palace, chancellery, prison, treasury, and shrine. The Registan Square emerged to the west of the Ark, and there feudal lords built thousands of fortified castles amidst lush gardens. Here, around the Ark, the city of Bukhara's central square, called the Shakhristan, was laid out. The Rabad, the city of merchants, then grew up behind the Shakhristan's walls. Today the Bukhara Museum stands within the Ark.

Ulugbek Madrasa & Abdul Aziz Khan MadrasaOne of the three big madrasas built by the enlightened ruler Ulughbek is Central Asia's oldest remaining madrasa, built in 1417 in the center of Bukhara. Its shape set a standard for later and larger buildings of it kind throughout the region. The main facade has circular towers at the corners; the arches, arranged in two stories, occupy the space between the portal and the towers. The facade is adorned with tiled mosaics and majolica, and the arch of the exterior portal is framed by a rope, a 15th-century characteristic.Facing it across the street is the Abdul Aziz Khan madrasa (1651-1652), forming the kosh (twin) so characteristic of Central Asia . Richly adorned with mosaics and majolica and relief the Abdul Aziz Khan madrasa is, nevertheless, inferior in its proportions to the masterworks of the previous century.

Lyabi-Khauz EnsembleCentral Asia's largest madrasa, Kukeltash, its area 95 x 76 yards, was built in 1568-1569; it houses 130 'khudzhras' (cells for living and learning). The madrasa's originality stems from the arcades running all along the second floor of the flanking facades. A half-century later, an ensemble emerged on the square in front of the Kukeltash, following the construction, on the banks of a large water-reservoir. A wanderers' house-mosque and a caravanserai was soon converted to a madrasa. This square, Lyabi-Khauz, is second in size only to the RegistanSitorai Mokhi-Khossa (Emir's Summer Palaces)The most beautiful of the monuments in the Bukhara countryside are the palaces of the last emirs, the Sitorai Mokhi-Khossa north of town. In the late 19th century, a palace was built in a huge garden, and construction of a harem, greenhouse, large water-reservoir and a second palace continued on the site until 1917. The palace contains the wonderful interiors of the Waiting Room and the White Hall with their excellent murals and carved 'ganch' (alabaster) on mirror-panels designed by the painter Khasandjan, master Shirin Murodov, and folk craftsmen of Uzbekistan.