Mary is the second largest city in Turkmenistan and lies about 350 km east of Ashgabat. It is the capital of the Mary Region, known as the province of Margiana in ancient times. Mary (Merv) was once known as the "Pearl of the East" and was the second city of Islam after Baghdad between the 8th-13th centuries; later it fell victim to a most horrific slaughter by the Mongols. Merv changed its name to Mary in 1937 and has grown into Turkmenistan's largest city. 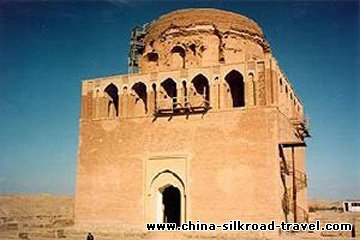 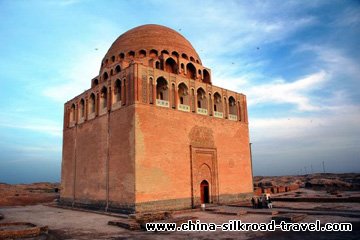 Merv - Perl of the East

Merv is a group of sites in an area which was inhabited throughout ancient times; civilizations here arose and perished many times. The sites of the ancient towns of Erk-Kala (6th century BC), Gyaur-Kala (3rd century BC), Big Kiz Kala (6th century AD) and Small Kiz Kala (7th century AD), Sultan-Kala (10th-13th centuries AD), and Muhammed ibn Zeid (12th century AD) correspond to different period of its existence. The bottom cultural layers of the most ancient part of Merv (Erk Kala) relates to the 6th-7th centuries B.C., i.e. to the time of its entry into the ancient Persian state of the Akhemenids. At that time, the city, with an area of about 20 ha, was surrounded by extensive fortress walls of raw brick. In the 4th century B.C.

Margiana was conquered by Alexander the Great. At the end of that century the lands along the Murghab River were a part of the Selevkid state ruled by Antiochus Soter, the successor of Alexander the Great. The site of the ancient town of Gyaur Kala, on an area of about 360ha, corresponds to the Antiohiya. During the ruling period of the Sasanid cult, many buildings were constructed. The tolerant attitude of the Sasanid governors to different religions is one of the peculiarities of that period. Together with the Zoroastrian state religion, Buddhism and Christianity co-existed.

The formation period of the early feudal period (6th-7th cc.) in Merv was marked mainly by the building of numerous fortified feudal country estates, and castles reminiscent of the stately castles of medieval Europe. The best example of Merv castle architecture from this period is Big Kiz Kala.

Merv reached the highpoint of its development in the Seljuk period, especially during the government of Sultan Sanjar (1118-1157) who made it the capital of Seljuk state. During the period of the Seljuks large structures were built in Merv, and its area reached 1,500-1,800 ha. It considerably exceeded in size not only such famous cities of the Near East as Damascus, Haleb, and Jerusalem, but also large cities of Western Europe of the 12th-14th centuries such as Paris, Bologna, Milan, Naples, etc. Sultan Kala (fortress of the Sultans) enclosed by fortress walls by Melik Shah (1072-1092) corresponds to the cities of this period.

In 1221, the city was fully destroyed by the Mongols. Merv was restored only 200 years after the Mongol invasion by Shakhruh, the son of the great conqueror, Emir Timur (Tamerlane) and ruler of an independent state with its capital in Herat. In 1418, he ordered the resettlement of Merv. As a result of difficulties with the water supply, the town was moved to a new spot, two kilometers to the south of Sultan Kala.

The ruins of Timurid Merv are known as Abdullahan Kala. Throughout the whole 16th century Merv was constantly exposed to raids and annexations by rulers of neighboring kingdoms. In 1510 it entered the state of the Sefevids, and was soon conquered by the Sheybanids. This lack of stability led to the displacement of the ancient West-East trade route from Merv to Herat. The 17th century was the only relatively quiet period for Merv, thanks to Khiva's protection. A severe crisis at the end of the 17th century, however, generated anarchy again. In 1727 Nadir, the future Khan of Iran, forcefully relocated all the people of Merv to Mashad.
Silk Road & Central Asia