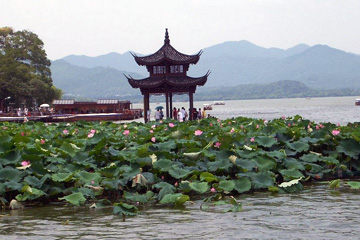 Transfer from your Shanghai hotel to the train station for a short train raid to Hangzhou.Take a cruise on the West Lake to enjoy the beautiful views of lake and surrounding mountains.Then visit one of China's most incredible cultural treasures-Lingyin Temple.The last stop is at Longjing Tea plantation,where you will have an opportunity to sample newly harvested tea.Sample a local specialty dinner
West Lake:The most famous attraction in Hangzhou is West Lake (Xi Hu /sshee hoo/). West Lake is man-made and created after the Chinese love for garden style parks for recreation.Hangzhou's West Lake Scenic Area, in the southwest of the city, covers 60 square kilometers, of which West Lake itself occupies 5.6 square kilometers.
.Lingyin Temple: Lingyin Temple, or Temple of the Soul's Retreat, got it name from its tranquil surroundings. Sheltered by forested hills on three sides, the temple is a quiet and sheltered sanctuary (when it is not thronged by visitors). Lingyin (Hidden Spirit) Temple is one of the largest and most visited Buddhist temples in China and holds the largest statue of the Buddha Sakyamuni in the lotus position.The temple consists of the Hall of the Heavenly King, Hall of the Great Hero, Hall of the Buddha of Medicine, East and West Winding Corridors and several other buildings. In the center of the Hall of the Heavenly King, sits a statue of Maitreya, the fat, bare-bellied Buddha with a smiling face – the laughing Buddha. 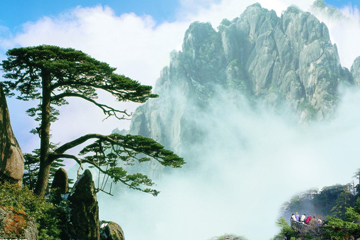 See world heritages site-Yellow Mountain,famous for its breathtaking natural scenery and cultural sites.Upon arrival,take a cable car to the summit and enjoy a walk in the mountains,witness soaring peaks,elegant pine trees and the tea of the clouds,Stay overnight on the summit.
Yellow Mountain:Of all the notable mountains in China, Yellow Mountain (Mt. Huangshan), to be found in the south of Anhui province, is probably the most famous. Originally known as Mt. Yishan it was renamed Mt. Huangshan in 747 AD in recognition of the legendary Huang Di, who was the reputed ancestor of the Chinese people and who made magic pills for immortality here.Wu yue is the collective name given to China's most important mountains, namely Mt. Taishan in Shandong Province, Mt. Huashan in Shanxi Province, Mt. Hengshan in Shanxi Province, Mt. Songshan in Henan Province and Mt. Hengshan in Hunan Province. It is said that you won't want to visit any other mountains after seeing wu yue but you won't wish to see even wu yue after returning from Yellow Mountain. This saying may give you some idea of the beauty and uniqueness of the Mountain. Together with the Yellow River, the Yangtze River and the Great Wall, Yellow Mountain has become one of the great symbols of China. 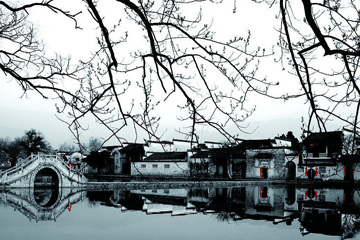 Start with a breathtaking sunrise before catching the cable car down the mountain to drive to Hongcun Village,the film site of "Crouching Tiger and Hidden Dragon".Walk through the old streets and see the sleeper train to former China's capital city-Nanjing.
Hongcun Village:Hongcun is located in the southwestern foot of Mt. Huangshan and about 11 kilometers off the southwest of Yixian County. In ancient time, it's the only access to Beijing to do business from Yixian. The whole village covers an area of about 28 hectares. The place which is classed as old village spreads 19.11 hectares of land.Hongcun was first founded in the Shaoxing period of the Southern Song Dynasty (about AD. 1131-1162), with a history of about 900 years. Hongcun was first called "Hongcun (another Chinese word with the same pronunciation)". According to the record of Pedigree of Wang Clan, because it was enlarged to the shape of the Taiyi elephant at that time, it was acclaimed as Hongcun. In the Qianlong period of the Qing Dynasty, its name was changed into Hongcun.Hongcun is the main village where Wang families live together. Wang clan is a respectable family in Central Plains. Because of moving to the south at the end of the Han dynasty, the descendants of Wang clan spread every parts of the south of the lower reaches of the Changjiang River. The ancestral home of Wang clan is Jinling.  In the Southern Song Dynasty, it moved to Huizhou. They are the earliest ancestor of Hongcun. 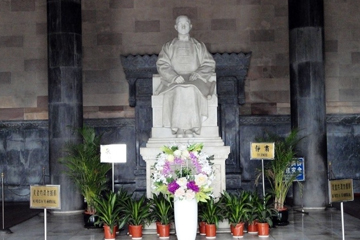 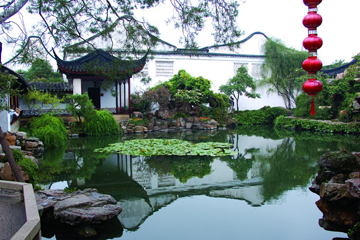 After a short train ride to ancient canal town of Suzhou,also known as the home of the "Classic Chinese Gardens",visit the charming Humble Administrator's Garden and the fine Master of the Nets Garden .Stroll along the Grand Canal to observe local life,visit Panmen Scenic Zone,which is famed for its water and city gates.The last stop ,visit a Silk Embroidery Factory to learn the history and production of Chinese silk.Enjoy a specialty dinner before spending your free time at the night market.
Humble Administration's Garden:covering about 52,000 sq. meters (12.85 acres), is the largest and most renowned. Due to its unique designs and ethereal beauty, the garden has garnered many special honors. It is listed as a World Cultural Heritage site and has also been designated as one of the Cultural Relics of National Importance under the Protection of the State as well as a Special Tourist Attraction of China. Along with theSummer Palace in Beijing, the Mountain Resort of Chengdein Hebei Province and the Lingering Garden in Suzhou, it is considered as one of China's four most famous gardens. No other classic garden in the country has been honored more than this one .
Master of the Nets Garden :Also called Fisherman's Garden, the 0.6-hectare garden is an elegant structure of a typical official's residence in the Qing Dynasty (1636-1911).The present garden was founded on the former site of a Song dynasty official's mansion. Its owner, an early Qing-dynasty official Song Zongyuan, gave its present name based on the earlier one, "Fisherman's Retreat.

After breakfast take the train back to Shanghai,drop off at your hotel.