The Kyrgyz people were nomads throughout much of their history, initially living in the region of south-central Russia between the Yenesei River and Lake Baikal about 2,000 years ago. The ancestors of the modern Kyrgyz were probably not Turks, like most people in the area are. The ancestors of the Kyrgyz exhibited European-like features (such as fair skin, green eyes, and red hair). At some time between the twelfth and sixteenth centuries, they settled in the Tien Shan Mountains.
In modern times, the Kyrgyz people have seen much of their land taken by Russians as the Russian empire spread east. From 1917 to 1991, the Kyrgyz lived in the Soviet Union as residents of the Kirghiz Soviet Socialist Republic. With the collapse of the Soviet Union, the Kyrgyz people became independent and created their own country.
Since 1991, Kyrgyzstan has been led by an elected president and parliamentary form of government. The government has concentrated on elevating the status of Kyrgyz culture in Kyrgyzstan without alienating persons of other ethnic backgrounds (a citizen of Kyrgyzstan does not need to be Kyrgyz). 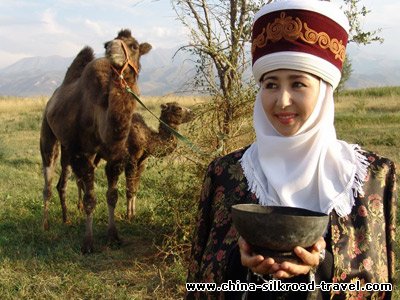