Amdo - Huangnan - Guoluo is dubbed as the most fantastic places along the "sky road". The stunning natural view along the railways offers not only a feast for the eyes but also a journey for the soul. Just come and join us to enjoy the enchanting trip!


What to Visit in Amdo?

Amdo County, sitting on Nagqu City, Tibet; it is adjacent to Zhiduo County and Zaduo County in Qinghai Province. The county borders on the north of Golmud City, Qinghai Province, which is the northern gate of Tibet. Here, we have mapped out some popular scenery including Tanggula Mountain, as well as Tsonag Lake.
First, we will come to Tanggula Mountain, 5,231 meters above sea level, the highest point on the Qinghai-Tibet Railway!
Then, we will head to Tsonag Lake, it is regarded as the "soul lake" for Tibetans. The famous Qinghai-Tibet railway passes right by the lake, making it the closest altiplano lake to the railway on the road. Passengers can take photos and capture the charming view of the lake as they would definitely have something to brag about on social media.


What to Visit in Huangnan?

As a born and bred in Qinghai, Huangnan Tibetan Autonomous Prefecture is the best place to enjoy the natural atmosphere. Its famous scenic spots include Kambala National Geological Park and Tibetan Buddhist monastery Longwu Temple to name just a few.
Kanbula National Forest Park is well-known for its magnificent unique Danxia Landform. The landscape is featured by beautiful peaks precipitous hills, caves, cliffs, and many rock peaks, stone columns, and stone walls. The large hills look like grand and vertical column Stowers and castles: the small hills are in the shape of giants, animals, and so on. Among these, views like " Fairies Meeting ," " The Stiff Hillock " and " Nanzong Valley " are the most representatives. 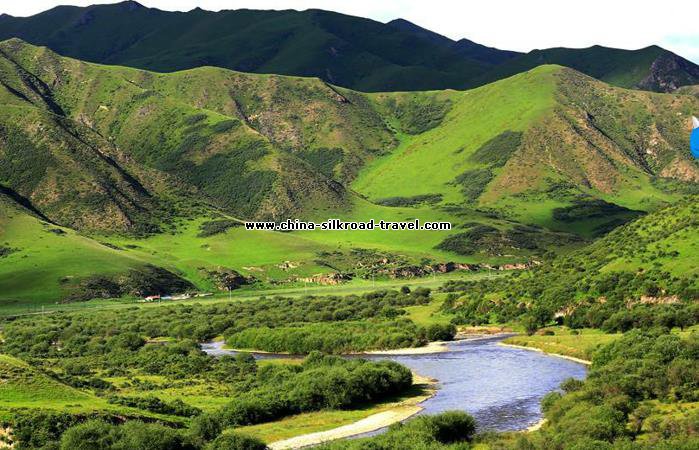 Longwu Temple is one of the earliest Gelugpa monasteries in the time when the temple was built. It is the most famous cultural relic tourist attraction and exquisite art exhibition area of the Yuan and Ming Dynasties.

What to Visit in Guoluo?

Located in the southeastern part of Qinghai Province, Guoluo is situated in the hinterland of the Qinghai-Tibet Plateau, while it is also located in the core area of Sanjiangyuan (means the Source of Three Rivers), known as the "China Water Tower." It has a natural grassland area of 101.3 million acres with dense rivers, injected into the Yellow River and the Yangtze River respectively.
Due to the unique geographical and climatic conditions, Guoluo has so far preserved the most complete primitive ecological humanities on the Qinghai-Tibet plateau. Known as the "China Water Tower," "Source of Rivers," or "King of Mountains," it is a pure land of the snowy plateau.
To protect the Sanjiangyuan National Park, the local government successively closed a number of related attractions. But this does not affect us to take a glimpse of these magical Chinese water towers that originate from the snowy plateau. Then follow me to explore this mysterious land.
Have you ever imagined that the Yangtze River and the Yellow River, which nurture the entire Chinese civilization, are only separated by a mountain? Yes, this unique phenomenon exists in Guoluo.
The main peak of Nianboyuze is 5,369 meters above sea level, and is the highest peak of Bayan Har Shan. It has a 650,000-year-old glacial address relic, as well as hot springs, ancient volcanic ruins. Natural landscapes that exist under various climatic conditions coexist in this place wonderfully and harmoniously. It has 3,600 mountain peaks, 360 lakes and is also the holy mountain of the Tibetan. 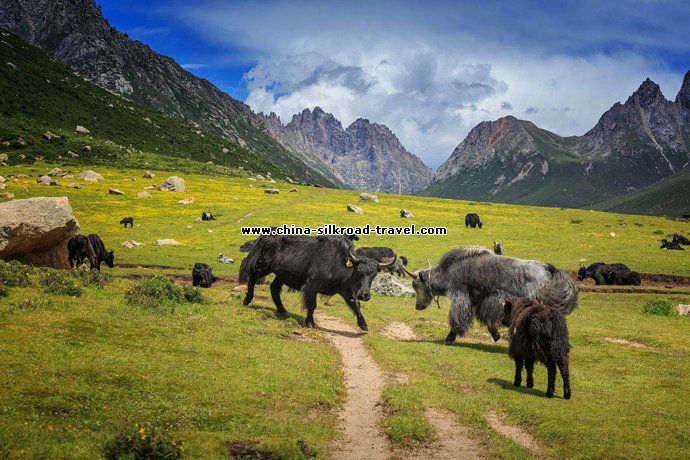 Anima  Qing Snow Mounatin ( Anima Qingxueshan ) is located in Maqin County, Guoluo Tibetan Autonomous Prefecture, belongs to the Kunlun Mountains. It is about 14 kilometers long and four kilometers wide, the central peak is 6,282 meters above sea level, there are also three peaks over 6,000 meters. There are 57 glaciers at the foot of the Anima Qingxueshan, with a total area of about 126 square kilometers.
The legend of the Tibetan people – the Anima Qingxueshan and the Mountain Kangrinboqe in Tibet, the Meili Snow Mountain in Yunnan, and Mount Zhara Lhatse in the Yushu City, in southeast Qinghai – are also known as the "Four Holy Mountains" in Tibetan areas.

Amdo-Huangnan-Guoluo has a plateau continental climate; the average elevation is more than 4,200 meters, and the average annual temperature is below 0℃ except for a few valleys and lowlands. The annual precipitation is 297.4～764.1 mm. Among them, from June to October is the best time to travel to Amdo, Huangnan and Guoluo. In May, the weather is still quite chilly outside, and the temperature at night may drop to -15 degrees Celsius. When camping in the mountainous area, you should take the warm alpine tents and down sleeping bags.

How to Get to Amdo?

National Highway 109 runs from the north to south, and travellers can take a train at the Amdo Train Station to enjoy the magnificent views along the Qinghai-Tibet Railway.
Amdo County is 2.5 kilometers away from Amdo Railway Station.

How to Get to Huangnan?

Huangnan has a varied topography, and the mode of transportation is relatively simple. There is no air or railway, therefore driving is the only way to travel to Huangnan. Meanwhile, Tongren Coach Station has the daily shuttle buses to Xining, Huangzhong, Huzhu; and Gansu. Furthermore, you can also take a bus from Tongren to Lijiaxia and Xiahe in Gansu.
How to get to Guoluo?
There are two ways to get to Guoluo: Trains, and Cars.


Go to Guoluo By Trains:

Tourist can take the trains from Shanghai, Beijing to Xining, and the journey takes about 41 hours. and then, take a bus from Xining to Guoluo ( 530 km ).

1. Plateau reaction: People who enter the plateau for the first time may experience different degrees of altitude sickness. It is best to prepare oxygen cylinders and anti-altitude drugs in advance. Strenuous activities should be avoided there.
2. Sun protection: Amdo, Huangnan, and Guoluo is located on the plateau, with strong ultraviolet rays and high wind and sand. It is best to use sunscreen and sand control measures in advance.
3. Respect folk customs: Please respect the local custom, and do not act contrary to the practices of local ethnic groups to avoid misunderstanding.
4. Protecting the ecology: Guoluo is located in the core area of Sanjiangyuan, and its ecological protection is very important. Please do not pollute the environment and not litter. In addition, Guoluo is also a paradise for wildlife; please do not disturb and hurt the elves on these plateaus. Do not kill, chase, feed wild animals, and do not destroy the ecological atmosphere in which people live in harmony with wild animals.