Home > China Tours > Yangze Cruise Tours >
Summary: Get a taste of the ancient city of Beijing Yangtze River to visit China's modern engineering achievement of the Three Gorges Dam.Travel back in time in Xi'an and witness the historic treasures of the Terracotta Warriors.Finally see Beijing's great monuments,the Great Wall,the Forbidden City and the Summer Palace just to name a few

You will arrange for your International flight to get to Beijing. we will meet you at the airport and transfer you to the hotel. The rest of the day free to do a little exploration at your leisure. 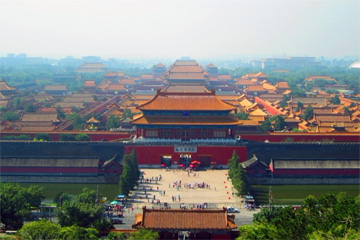 After breakfast we will start with a visit to the Temple of Heaven. You will see local people practicing Tai Chi, as well as singing and practising calligraphy in the neighboring park. Then we will take a leisurely walk through Tiananmen Square to the Forbidden City, enjoy the panoramic view of Forbidden City from Jingshan Hill.
Tiananmen Square: Located at the centre of Beijing, Tiananmen, or the Gate of Heavenly Peace, is the largest city public square in the world. It was originally built in 1651 and in the 1950s it was enlarged to its current size, four times the original. It has great cultural significance as it was the site of a number of important events in the Chinese history, including the proclamation of the People’s Republic of China on October 1, 1949. It was named ‘Tiananmen Square’ because it is situated in front of the south gate of the Forbidden City - Tiananmen.
The Forbidden City: Located at the city center and called Gu Gong in Chinese, it was the imperial palace for twenty-four emperors during the Ming and Qing dynasties. It took 14 years to build during the reign of Emperor Chengzu in the Ming Dynasty (1368-1644). Ancient Chinese Astronomers believed that the Purple Star (Polaris) was in the center of heaven and the Heavenly Emperor lived in the Purple Palace. The Palace for the emperor on earth was so called the Purple City. It was forbidden to enter without special permission of the Emperor. Hence its name 'The Purple Forbidden City', usually just 'The Forbidden City’. Also called Palace Museum, the Forbidden City is recognized as the most magnificent and splendid palace complex in China and one of the five world-famous palaces, along with the Palace of Versailles in France, Buckingham Palace in England, the White House in United States, and the Kremlin in Russia.
The Temple of Heaven: Temple of Heaven, or Tiantan, is located in the southern part of Beijing, and has been one of the most sacred places for the whole country for more than five centuries. The complex was visited by the Emperors of the Ming and Qing dynasties for annual ceremonies of prayer to heaven, and is the largest one in Beijing among several royal altars to Heaven, Earth, Sun, Moon and other deities or symbolic forces of Nature. 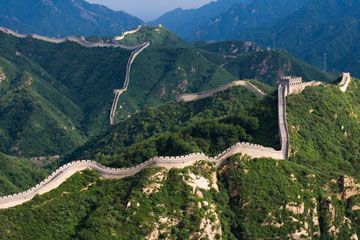 In the morning we will visit the Mutianyu Great Wall and Ming Tomb. After that we will explore the Beijing alleyways - "Hutong" by riding on a rickshaw to catch close-up glimpses of traditional local life.
The Mutianyu Great Wall : Lies in Huairou County, Mutianyu Section is 73 kilometers away from Beijing City.Commanding the strategic importance,Mutianyu Section is called as the Majestic Pass on Precipitous Mountains.It is one of the best-preserved parts of the Great Wall.
The Ming Tombs: Also known as the “13 Tombs”, this is a collection of mausoleums of the 13 out of 17 of the Ming Dynasty emperors. The tomb that can be visited is that of Emperor Wanli, who reigned from 1537 to 1620, and his two empresses. Unearthed in 1956, this is literally an underground palace located 27m below ground surface.
Hutong: It is said that the real culture of Beijing is the culture of the Hutong and Courtyards. That is so true. Hutong is a Mongolian word meaning water well. At nine meters wide, it is the term given to a lane or small street that originated during the Yuan Dynasty (1271–1368). These hutongs, or alleyways, are formed by lines of traditional courtyard residences. Many neighborhoods were thus formed, and the word hutong now refers to these neighbourhoods of alleyways. They have become representatives of local culture, thus it is the first choice for people who would like to learn about the local history and culture. 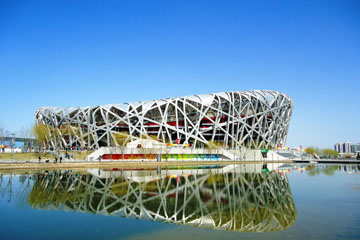 We will take a photo stop at the 2008 Olympic Site to see the Bird's Nest National Stadium and Water Cube Aquatic Centre, then explore the Summer Palace - a former imperial summer resort.
Bird's Nest National Stadium: The National Stadium, affectionately known as Bird's Nest due to its nest-like appearance, is situated in the Olympic Green Village, in the northern Chaoyang District of Beijing. It was designed as the main stadium of 2008 Beijing Olympic Games. The Olympic events of track and field, football, javelin, hammer-throw and discus were held there.
Water Cube Aquatic Centre: Located on the west side of Landscape Avenue in the Olympic Green and to the west of Beijing National Stadium (Bird's Nest), the National Aquatics Center houses the official 2008 Olympics swimming facility. It measures 177 meters long, 177meters wide, and 30 meters high and covers an area of 62,950 square-meters. It has four floors: one at street level, two above, and one below ground.
Summer Palace: Situated in the Haidian District northwest of Beijing City, the Summer Palace is 15 kilometers from central Beijing. Being the largest and most well-preserved royal park in China, it has greatly influenced Chinese horticulture and landscape with its famous natural views and cultural interests. It has long since been recognized as 'The Museum of Royal Gardens'. 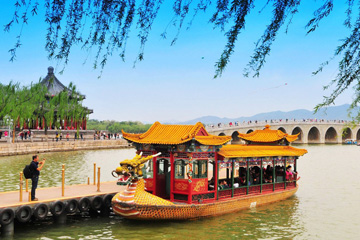 After breakfast visit a local family and Then explore the Summer Place-a former imperial summer resort. Take an afternoon flight to Chongqing .
Summer Place: Situated in the Haidian District northwest of Beijing City, the Summer Palace is 15 kilometers (9.3 miles) from central Beijing. Being the largest and most well-preserved royal park in China, it greatly influences Chinese horticulture and landscape with its famous natural views and cultural interests, which also has long since been recognized as 'The Museum of Royal Gardens' .The construction started in 1750 as a luxurious royal garden for royal families to rest and entertain. It later became the main residence of royal members in the end of the Qing Dynasty. However, like most of the gardens of Beijing, it could not elude the rampages of the Anglo-French Allied Force and was destroyed by fire. According to historical documents, with original name as 'Qingyi Garden' (Garden of Clear Ripples), the Summer Palace (Yiheyuan) was renamed after its first reconstruction in 1888. It was also recorded that Empress Dowager Cixi embezzled navy funds to reconstruct it as a resort in which to spend the rest of her life. In 1900, the Summer Palace suffered another hit by the Eight-Power Allied Force and was repaired in the next two years. In 1924, it was open to the public. It ranked amongst the World Heritage Sites by UNESCO in 1998, as well as one of the first national AAAAA tourist spots in China . 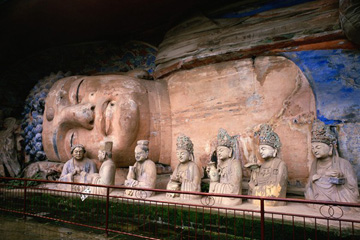 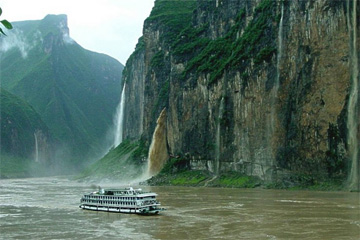 Sail through Xiling Gorge,Wu Gorge and Qutang Gorge and enjoy the magnificent views of various shapes of peaks,rolling rills and small towns along the river.Also you shall undertake on-shore excursions to the Ghost City of Fengdu,take a Sampan（wooden boat）tour to one of the Yangtze's tributaries,pass through the world's biggest five level ship lock.
Xiling Gorge:Xiling Gorge is mainly composed of smaller gorges and dangerous shoals. From west to east, there are four gorges - The Military Books and Precious Sword Gorge (Bingshu Baojian Xia), The Ox and Horse Lungs Gorge (Niugan Mafei Xia), Kongling Gorge, and Lantern Shadow Gorge (Dengying Xia) - and some dangerous shoals such as Qingtan, Xietan, Xintan and Konglingtan .
Wu Gorge:The Wu Gorge is the second gorge of the Three Gorges of Yangtze River and is famous for its elegance. Winding over 25 miles, it starts from the estuary of Daning River (east of Wushan) in the west and ends at Guandukou in Badong, Hubei Province .
Qutang Gorge :Qutang Gorge, the shortest and most majestic of the Three Gorges, winds five miles from Baidi City in Fengjie County to Daxi Town in Wushan County. The two banks of the Qutang Gorge contain numerous scenic spots.
Ghost City of Fengdu:Located on the Ming Mountain on the northern bank of the Yangtze River, Fengdu County is known to most Chinese as the 'Ghost City'. Having nearly two thousand years' history, the Ghost City combines the cultures of Confucianism,Taoism and Buddhism with the mystique of ghosts. 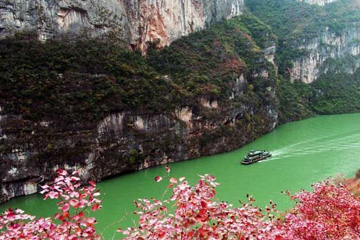 Today experience the Tai Chi morning exercises ,visit the Three Gorges Dam Project,enjoy a variety of Chinese cultural activities on board,such as Chinese brush painting shows,Chinese silk embroidery lessons.
Three Gorges Dam Project:"Three Gorges Dam Project" is the short term for the water control project at the three gorges on Yangtze River. It is located in the middle section of Xiling Gorge (one of the three gorges on Yangtze River) near Sandouping Town inYichang City, Hubei Province. Being the world's largest hydropower project, Three Gorges Dam Project has created many "Firsts" such as the most efficient dam in flood control, the most difficult construction work and the largest migration project in the world.
Tai Chi :is a centuries-old Chinese martial art that descends from qigong, an ancient Chinese discipline that has its roots in traditional Chinese medicine. (The people that you see moving gracefully in parks in China are practicing tai chi.) According to some records, tai chi dates back as far as 2,500 years! It involves a series of slow, meditative body movements that were originally designed for self-defense and to promote inner peace and calm.

Disembark at Yichang ,transfer to Yichang airport for your onward flight.