Home > China Tours > Xinjiang Tours >
Summary: The picturesque landscape of Xinjiang,Narati Grassland, Sayram lake.Facing the imposing natural beauty of Xinjiang,You will be a part of the uniqueness of the nature.

Today your flight will touch down in Urumqi, the first stop of our Xinjiang grassland tour. Urumqi is a major city on the north route of the Silk Road as well as the center for economic and cultural exchanges between the East and the West, also  a multi - ethnic city. Minorities can be found on every street, the entire city demonstrates a strong ethnic style. Upon your arrival, be met and transfer to the hotel check in.
Accommodation: In Urumqi

Today you will enjoy the tour of the picturesque Heavenly Lake (approximately1.5hrs), 2000m up in the Tianshan mountain range. which is surrounded by the snow mountains, blooming wildflowers, evergreen pine trees. 40-minute sceniic shuttle bus ride that twists though the dramatic mountains. Then you can either walk to the lakeside in 10mins or take the electronic cart. There are 3 options suggested. Boating cruise to take the incredible view of Tianshan Mountain. Trekking along the lake in the fresh air. or you can explore further uo to the Maya Mountain by the cable car to enjoy the magnificent view of the Mountains. The lunch in the local Kazakh's yurt is highly recommended.

Travel back to Urumqi in the afternoon which is about the other 1.5hrs, continue the tour at the Xinjiang regional museum to see archaeological treasures from the Silk Road and Xinjiang's minority cultures. After then, visit the Xinjiang International Bazaar, the largest bazaar in Urumqi. You'll find a bustling market filled with fruit, clothing, crafts, knives, carpets and almost anything that you can imagine.
Accommodation: In Urumqi 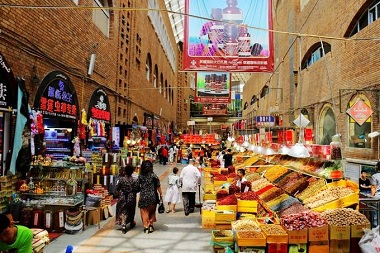 Start the trip off with the 3hours driving to Turpan, passing by the wind power station which is the largest one in Asia spreading at the foot of Tianshan Mountain. Following glimpse of Salt Lake in Dabancheng. We'll be amazed by the histroical sites and oasis land of Turpan. A must and first visit is the oldest Uighur village Tuyoq Village located in the very center of Flaming Mountain Canyon. It used to be the holy site of Buddhism and Islam. The village consists of four parts: Canyon scenery, Thousand Buddha Caves, Maza tomb and the old buildings of the ancient village. Following a lunch in the traditional Uighur family in their grape yard,we will drive all the way of 1hr to Sugong Minaret, the largest Islamic minaret in China built in 1778 by Sulaiman that is the ruler and leader of Turpan to commemorate and commend his father's achievements of the reunion of Xinjiang.

In the afternoon we will also pay a visit to Karez Well, A special irrigation system that the locals make full use of the topography of Turpan to draw the underground water to irrigate their farmland ingeniously.  The tour today end up to enjoy the sunset of Jiaohe Ruins with a history of 2,300 years lies between two rivers on a loess plateau atop a cliff of over 30m. It is one of the best preserved ruins of its ancient era in China, it was include in the World Heritage List on June 22, 2014.
Accommodation: In Turpan 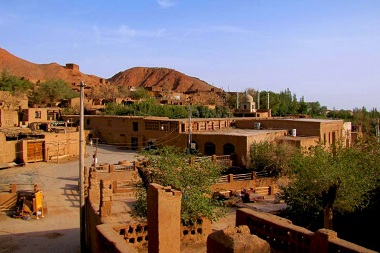 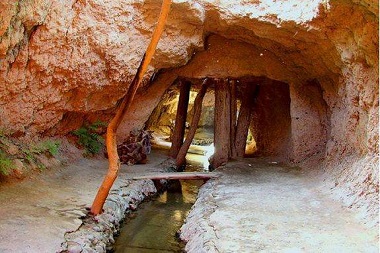 Today you will say goodbye to Turpan where you must have amazing experience and drive all the way to the next stop Kuitun, on the way, you will visit the beautiful and mysterious Anjihai Grand Canyon, also known as Red Mountain Grand Canyon, which is located around Anji Haihe River, northern slope of Tianshan Mountain. Anjihai River is originated in Tianshan Mountain, one of the four major river systems in Shawan, through many years of scouring, in the vicinity of Tungut, it was formed a huge alluvial fan under the Northern slope of Tianshan Mountain. The scale of the river valley alluvial fan is quite magnificent, to the north opening with umbrella-shaped, it can be called a geographical wonder. Here also is the paradise for the photographers. Arrive in Kuitun, transfer to the hotel, have a good rest.
Accommodation: In Kuitun 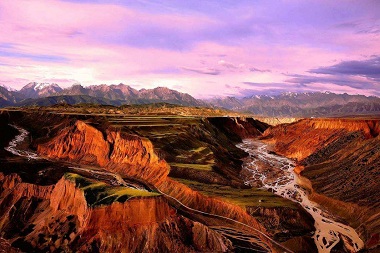 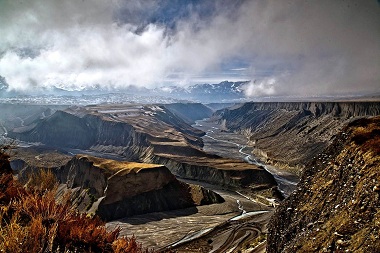 In the morning, we will meet you at the hotel lobby and bring you to visit the Sayram Lake, the another highlight of your northern Xinjiang tour, which is known as the last drop of tears of the Atlantic. Sayram Lake is a fairyland with wonderful natural scenery. its water is very clear and pure. you can stroll on the shore, enjoy the blooming wildflowers and the beautiful grassland around the lake. Next we will drive you to enjoy the beautiful Yili Lavender, reputed as “The Oriental Provence”. On the way to Yining, you will see the famous Guozigou Bridge, the largest and most important bridge in Xinjiang. There are many beautiful S bends and you can enjoy the scenery of Guozigou valley which is the most beautiful valley in southern Xinjiang en route. After visiting, bus transfer to Yining hotel for rest.
Accommodation: In Yining 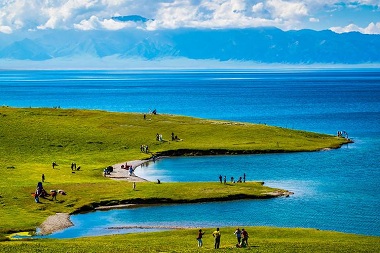 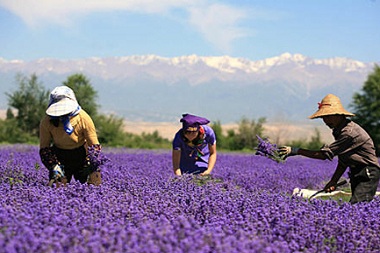 A new day begin! Today we will meet you at the hotel and then drive the way to Zhaosu County, zhaosu County as the official romanized name, also transliterated from Todo Mongolian as Mongolküre County, is a county situated within the Xinjiang Uyghur Autonomous Region and is under the administration of the Ili Kazakh Autonomous Prefecture. It contains an area of 10,455 km². on the way, you can enjoy the scenery of Zhaosu Cole Flower, nearly a million acres of cole flower blossoms spread across the slopes, like a golden blanket. Here you can also visit the Xiata Grassland, here is a magical tourist attraction, beautiful grassland, snowy peaks will give you a unfortable memory.
Accommodation: In Zhaosu 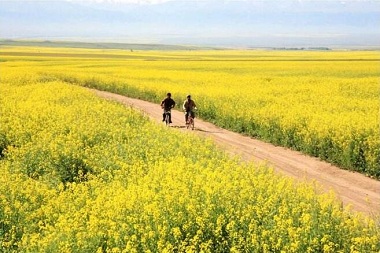 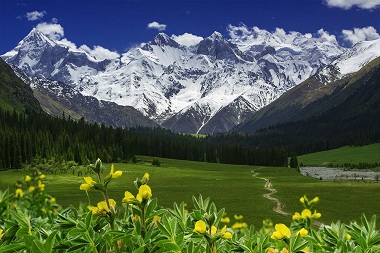 This morning, you will start your journey from the ingenious Kalajun Prairie, which is as beautiful as in a poem or a picture. There are springs densely distributed here. Every year, from May to September. The ideal place for people of the pasture to exchange materials and hold cultural activities. Kalajun, in Kazak, means "a dark wilderness". For generations, people on the grassland have lived a simple nomadic life. The traditional lifestyle exudes a unique charm. and take the photos there. Thereafter, we will transfer to the hotel in Tekes for overnight stay.
Accommodation: In Tekes 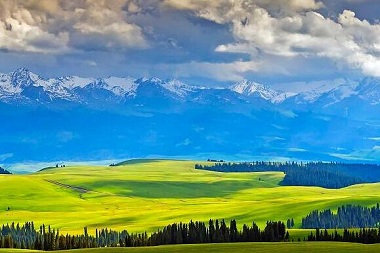 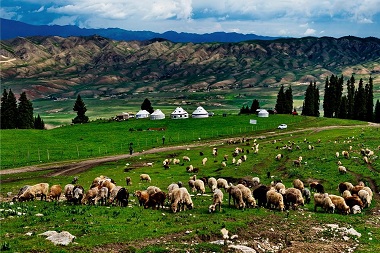 Today, your guide and driver will pick you up in the morning. We’ll head to Naraty Grassland with about 3 to 4 hours driving, Naraty grassland, one of four famous grassland in the world, it has been a famous pasture land ever since the ancient times, and there are wide river valley, high mountains, the crisscrossed deep gores, the flourishing forest and open grassland. It is crowned as “air pasture” and “garden highway”. you can enjoy the beautiful scenery and explore the Kazakh way of life. Afterwards, bus transfer to the local hotel for check in and have a good rest.
Accommodation: In Naraty 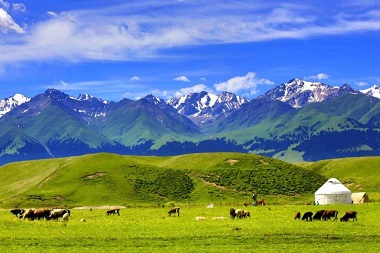 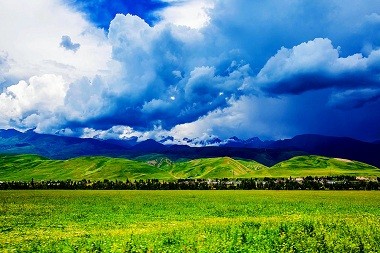 Enjoy the fresh air and sunrise in the morning, then we will arrange airport transfer for you and wish you a pleasant home journey