Home > China Tours > Top China Tours >
Summary: China's most stunning scenic city of Guilin attracts thousands of tourists annually from the world over.Visit spectacular rice terraces,enjoy a cruise on the stunning Li River ,relax as you bathe in the beautiful rural scenery of Yangshuo before having fun in exciting Hong Kong.

International flight on your own arrangement. Once arrive in Guilin,be met and transferred to your hotel. Feel free at leisure for the rest of the day. 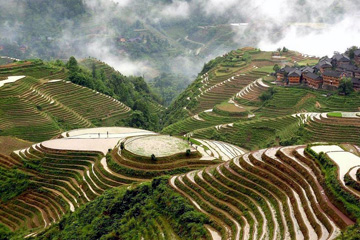 Today head to the beautiful rural countryside-Longsheng to see ancient rice terraces built about 800 years ago.Wander through little stone pathway and traditional wooden houses on stilts and villages of the Zhuang people.Wake up the mountain to admire the spectacular rice terrace scenery.This evening sample the local specialty dinner.
Longsheng :Longsheng Gezu Autonomous County (Longsheng Multi-ethnic Autonomous County) is located in the northeastern portion of Guangxi and it is under Guilin's governance. This area is the centralized hub for about ten ethnic minority groups in northern Guilin including Zhuang, Yao, Miao and Dong, etc. who thrive on farming and tourism. Longsheng boasts many attractions that have helped build a thriving culture of tourism. A few of its highlights include: Dragon's Backbone Rice Terraces located in Heping  Township; Longsheng Hot Springs, which originate in the Longsheng Hot Springs National Forest Park and is considered supernatural water by locals - the water that flows from the Longsheng Hot Springs is natural mineral water which can be used both medicinally and as drinking water; Huaping National Nature Reserve, which is the largest subtropical evergreen broad-leaf forest and also known for its many waterfalls; Longsheng Nanshan Prairie, which is a natural meadow stretching across Hunan and Guangxi Provinces and famed as 'China Southland's Hulunbeier Prairie (in Inner Mongolia)' . 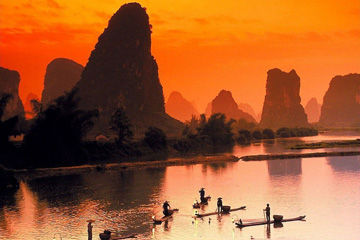 After breakfast enjoy the spectacular Li River Cruises.The cruise ship goes past the bizarre shaped mountains,villages and water buffaloes.
Li River Cruises:The Li River (Lí Jiāng, pronounced Lee Jyang) is the main river system of Guilin Prefecture, Northeast Guangxi. Originating from Kitten Mountain (Mao’er Shan), the Li River winds its way south for 437 km (272 miles). The 83-kilometer-long (52-mile-long) section between Guilin and Yangshuo is the most beautiful part.The Li River from Zhujiang Pier (Guilin city suburbs) to Yangshuo is like an artist's masterpiece. The landscape is decorated with startling hills, steep cliffs, fantastic caves and farming villages, and is lined with bamboo groves. In a Chinese poem it is written: "The river is a green silk ribbon, and the hills are jade hairpins".It is a Chinese tradition to divide the long trip into sections (just as the Three gorges along the Yangtze River) and give each peak an imaginative name. Although some take much of your imagination to see what it is like, listening to tour guide's legendary stories behind them is a delightful experience when you are appreciating the landscapes. Most are mystical fairy and love stories. The writer choose some of the peaks and places to illustrate below. (They are presented in order of location along the River.

Disembark at the traditional country town of Yangshuo.Spend a free day to explore tranquilly countryside and local villages,see rice paddies and fish farms.There are many activities to day,such as cycling,bamboo boat drifting and more. 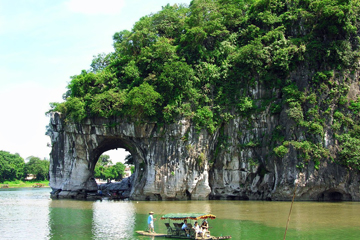 Visit"Palace of Natural Art"Reed Flute Cave,named after the dense ,verdant reeds that grow at its entrance .Inside the 240m deep cave is a world of ancient stalactites ,stone pillars and bizarre carbonate rock formations,all gently lit to highlight unique their beauty. view the beautiful vista of the Elephant Trunk Hill-a land of Guilin -which resembles a huge elephant trunk on the bank of the Li River,explore local streets before taking an overnight train to Shenzhen.
Elephant Trunk Hill : is located on the western bank of Li River. The shape of the hill is just like a huge elephant drinking water from the river with its trunk, so it is called Elephant Trunk Hill.Shui Yue Cave (Water Moon Cave) is between the trunk and the legs, which is a semi-round cave penetrated by water.
Palace of Natural Art"Reed Flute Cave:Known as “the Palace of Natural Arts”, Reed Flute Cave's remarkable features impress domestic and foreign visitors alike. Situated at the foot of Guangming Hill in northeastern Guiln, Reed Flute Cave got its name from the kind of reed growing immediately outside the cave entrance, which is used to make fine flutes.It has been a tourist attraction for more than 1,000 years. Inside the cave, there are various stalagmites, stone curtains, stone flowers and stone pillars, which constitute a unique charm, making it known as a palace of natural art.

Morning arrive the board city of Shenzhen,go through the custom and get on a short train to Hong Kong.Make your own way to hotel. 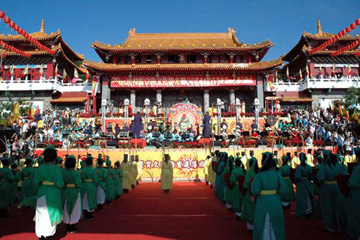 Meet and see the highlights of Hong Kong Island,your experiences starts with a visit to the Man Mo Temple,which is notable for its many fine ,well-polished brass,take historical railway up the Peak to enjoy breathtaking views of the harbour and the Kowloon Peninsula,wander around at Aberdeen fishing village,drive through one of Hong Kong's well-known beaches-Repulse Bay,finishes Shopper's Paradise -Stanley Market.
Man Mo Temple:It is the oldest temple in Hong Kong in the Mid-levels area of Hong Kong Island. It is half the way up Victoria Peak. In the temple, two idols are worshiped, the God of Literature and the God of War. It was built in 1847. People go to the Man Mo temples in China to pray for success in examinations or in their academic or literary endeavors. They also go to Man Mo temples to settle disputes. A bronze bell there was also made in 1847. Though it has been often renovated, the original appearance is preserved, and it is visited by lots of people.It is said that the ceremony for settling disputes between people of cutting off a chicken's head and burning yellow paper originated during the Qing dynasty. In this ceremony, in order to avoid going to court, people invoke the gods to punish people who don't perform the vows that they publicly make in the ceremony.
Stanley Market:A popular market town on the sunny south side of Hong Kong Island, Stanley's relaxed ambiance, crisp sea environs and bargain buys have made it world famous.Seven days a week the open market around Stanley New Street and Stanley Market Road throbs with the passing parade of life as bargain-hunters from all over the world join in the fun of haggling with shopkeepers and stallholders. Choose from brand-name clothing and accessories, or simply irresistible souvenirs, ornaments and other Oriental knick-knacks.

After breakfast transfer to the airport,take the flight to your destination.