Today you will arrange your international flight to Chengdu, we will meet you at the airport and take you to downtown Chengdu to check in your hotel. Have a good rest.
Accommodation: In Chengdu 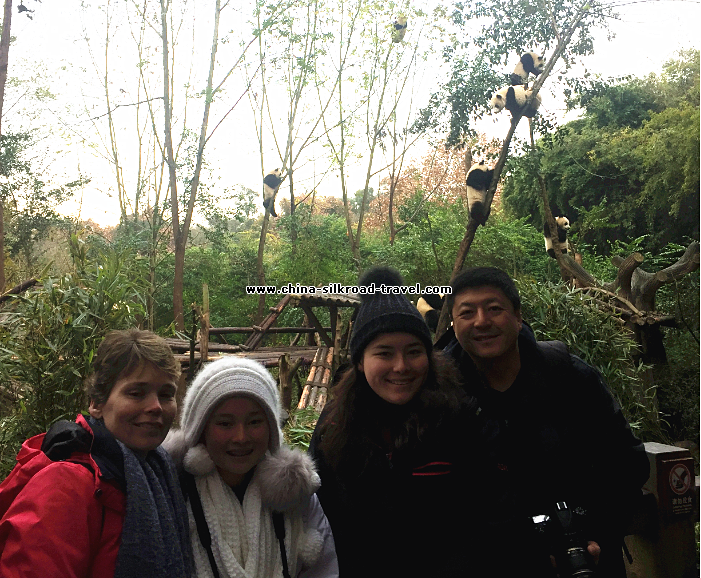 Full day sightseeing in Chengdu. In the morning, we will visit Chengdu Research Base of Giant Panda Breeding (known as Chengdu Panda Base) which is the best suitable environment for rearing and breeding. Here, you can explore the daily life of cute pandas, and see them eating bamboo at their active time. After then, head to Kuan&Zhai Alley, which is one of the best historical reserve in Chengdu, where you can touch history traces here. Into the alley, into the The most Chengdu, the world's oldest and most fashionable old Chengdu. Stroll around the Chengdu People’s Park, enjoy your free time and afternoon tea.
Chengdu Panda Base: This is the Giant Panda Breeding and Research Centre - Zoos, scientific research centers, breeding centers, or semi-protected areas work together to maintain a self-sustaining population of a given species. This population may serve as a hedge against extinction of the species, as well as a reservoir for improved understanding of its natural history. The Chengdu Panda Base is an example of a scientific institute engaged in research towards conservation. The goal is not only to provide technical support for scientific research on wild pandas, but also to increase the wild population through improved management and, ultimately reintroduction of individuals into areas from which the populations have declined. Research at the Chengdu Panda Base focuses on the advancement of wildlife conservation in China.
Accommodation: In Chengdu 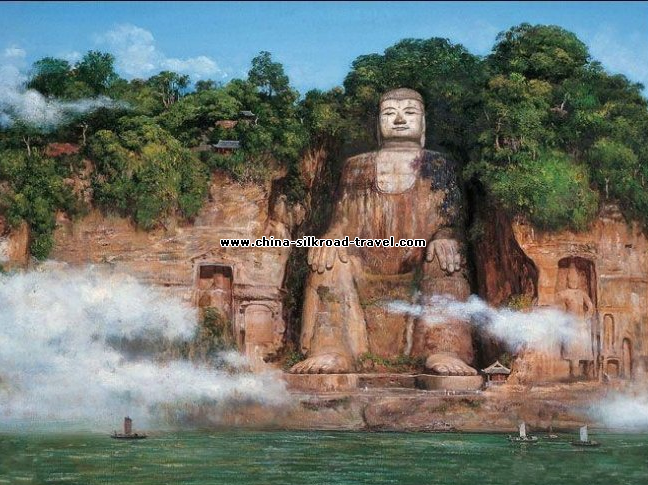 Morning driving about 154km to visit the Leshan Giant Buddha with the height of 71 meter, sitting at the confluence of three rivers. It is the tallest stone Buddha statue in the world. It was carved on the cliff of Lingyun Mountain in order to suppress the flood. Enjoy spectacular view of the huge statue as you walking down through the narrow staircases to the foot of the Buddha. After that, we will drive back to Chengdu for rest.
Leshan Buddha Sculpture: The Giant Buddha (Dafo in Chinese) of Leshan is the tallest stone Buddha statue in the world, carved out of a cliff face by an 8th-century monk in southern Szechuan province. The Giant Buddha overlooks the confluence of the Minjiang, Dadu and Qingyi rivers and faces the sacred Mount Emei (with which it shares its World Heritage status). Construction on the Giant Buddha began in 713 AD. It was the idea of a Chinese monk named Haitong, who hoped that the Buddha would calm the turbulent waters that plagued the shipping vessels traveling down the river. His plans were not just supernatural, as it turned out. What had happened was that the enormous amount of rubble carved away from the cliff would be deposited in the river, actually altering the currents and calming the waters.
Accommodation: In Chengdu 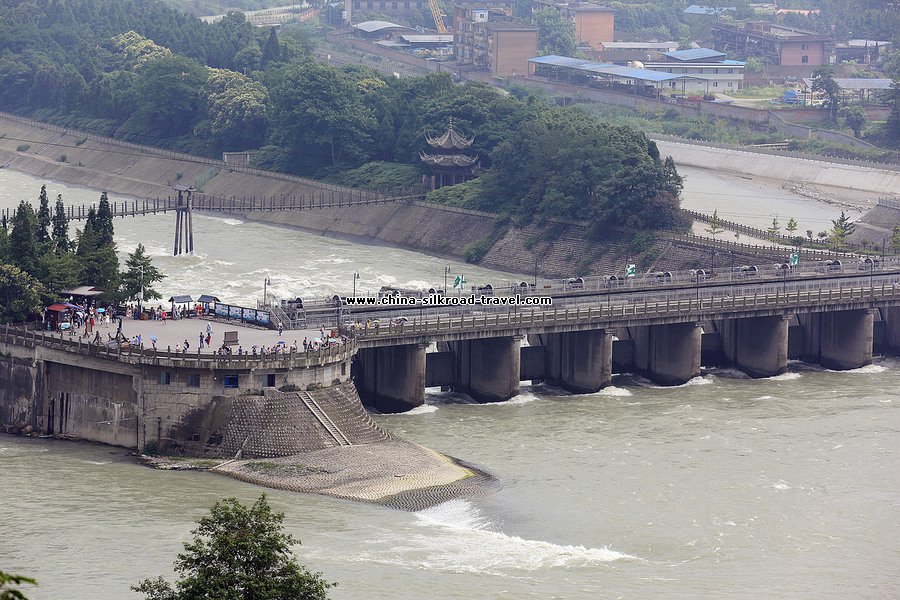 After breakfast, we will head to visit the Dujiangyan Irrigation System, which is the great technological achievement of ancient China. For more than 2,300 years of irrigation, Dujiangyan has benefited the local people just as it prevents Min River basin from annual flooding and made the ancient Shu State a famed ‘land of abundance'. This system still plays an indispensable function in agriculture. Then drive to Li county.
The Dujiangyan is an ancient irrigation system in Dujiangyan City, Sichuan, China. Originally constructed around 256 BC by the State of Qin as an irrigation and flood control project, it is still in use today. The system's infrastructure develops on the Min River (Minjiang), the longest tributary of the Yangtze. The area is in the west part of the Chengdu Plain, between the Sichuan basin and the Tibetan plateau. Originally, the Min would rush down from the Min Mountains and slow down abruptly after reaching the Chengdu Plain, filling the watercourse with silt, thus making the nearby areas extremely prone to floods. Li Bing, then governor of Shu for the state of Qin, and his son headed the construction of the Dujiangyan, which harnessed the river using a new method of channeling and dividing the water rather than simply damming it. The water management scheme is still in use today to irrigate over 5,300 square kilometres (2,000 sq mi) of land in the region. The Dujiangyan, the Zhengguo Canal in Shaanxi and the Lingqu Canal in Guangxi are collectively known as the "three great hydraulic engineering projects of the Qin.
Accommodation: In Li County 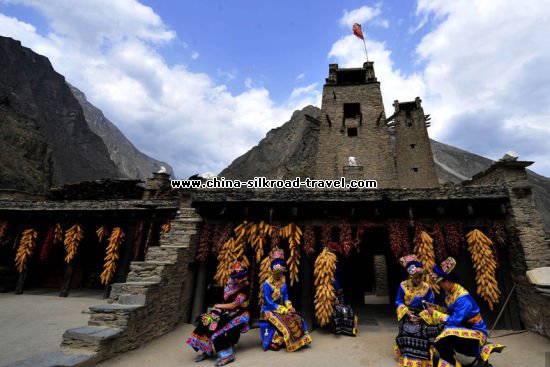 In the morning, we will driving to TaoPingQiangZhai, which is the most complete barbican in the world. Then we are going to the GanBaoZangZhai, It is a typical large stockaded village inhabited by Jiarong Tibetans. We can explore the ethnic culture. Later, driving to Hongyuan.
Taopingqiangzhai : It is located in Lixian County of Aba Tibetan Autonomous Prefecture. Qiang is an ancient nationality living in the western area of China. After several movements, a part of them went into the upper reaches of Minjiang River. It is today s Qiang ethnic. Now Qiang has became the unique minority in Sichuan province. The Taopingqingzhai was built in 111 before Christ. It was valued as the living fossil of the Qiang nationality architectural art. In the history, the two remaining houses stood aloft there for hundreds of years.
Accommodation: In Hongyuan 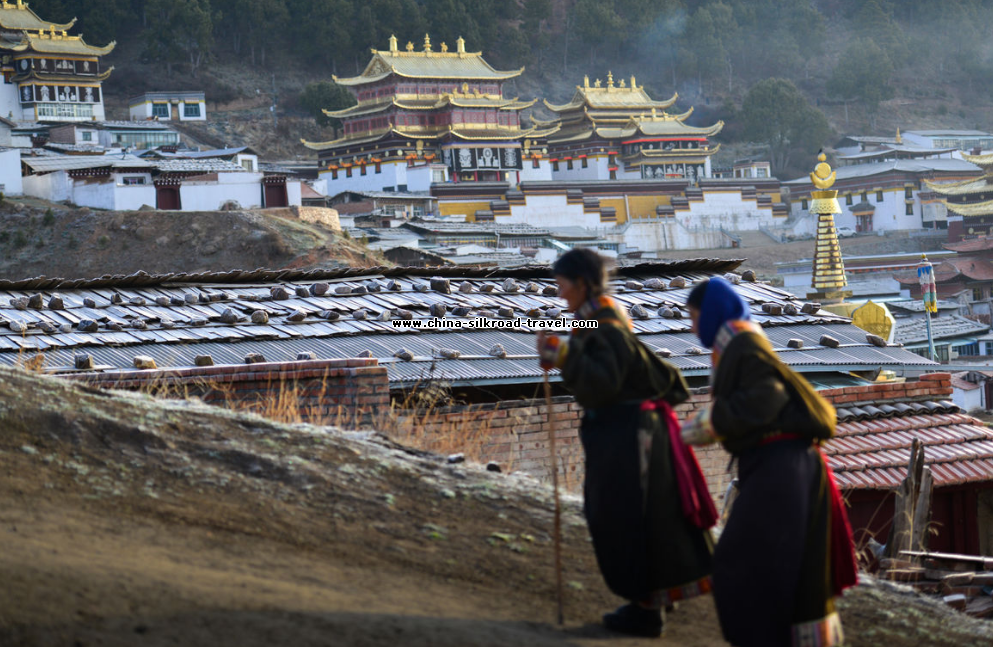 Morning breakfast at the hotel, then we will drive to Langmusi. visiting the Langmu Temple, Langmu Temple belongs to Tibetan Buddhism. One of the main pagodas of the temple lays the human body of the fifth Living Buddha, which is the best preserved one with longest time, though after more than two hundred years the skin of the Living Buddha is still elastic. after that, drive to Xiahe for rest.
Langmusi is known as the tiger cave and the fairy in Tibetan. It was said that there was a fierce tiger in the cave of the canyon on the southeastern bank of Bailong River. And there was also a stalactite which is the spitting image of a slim fairy. So it is said there is a fairy in the tiger cave. However, another story was going about that a beautiful girl who was kind, selfless and brave who turned into a rock in the cave with the company of the tiger in order to prevent the tiger from doing harm to people. There are lots of Buddhist ceremonies in Tibetan. The main Buddhist ceremonies at Langmu Temple are the sunning of the Buddha Festival and Living Buddhas’ teaching. Buddhist Tangka, shaidafo is a routine Buddhist ceremony which is held on the 15th of the first month in the lunar calendar, the Lantern Festival every year.
Accommodation: In Xiahe 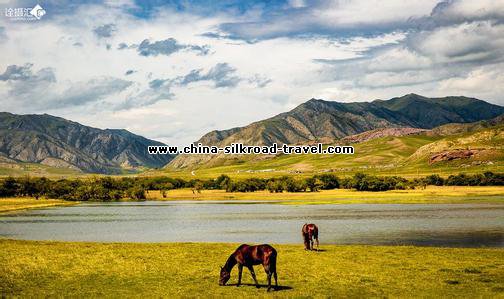 After breakfast, we will be visiting the Labrang Monastery. As a propitious place in the hearts of the Tibetans, it stands by the Daxia River and faces the Dragon Mountain. A long time ago, this place was a boundless sea, which over time had turned into the present landscape. And enjoy the scenery of Songke Grassland, This vast expanse of grassy plains, covering an area of around 70 square kilometers, is a lonely, beautiful place that presents a nice change for those coming from the bustling cities, then drive to Tongren. visit Wutun Temple, which is located in the Wutun village just outside of Tongren; the Temple is divided into the "lower" and "upper" temple. This classically styled temple is filled with ancient Tibetan treasures: frescos and weavings. The temple is widely renowned across Qinghai; these two half-temples combine a comprehensive record of the religious history of Tongren and Qinghai.
Accommodation: In Tongren 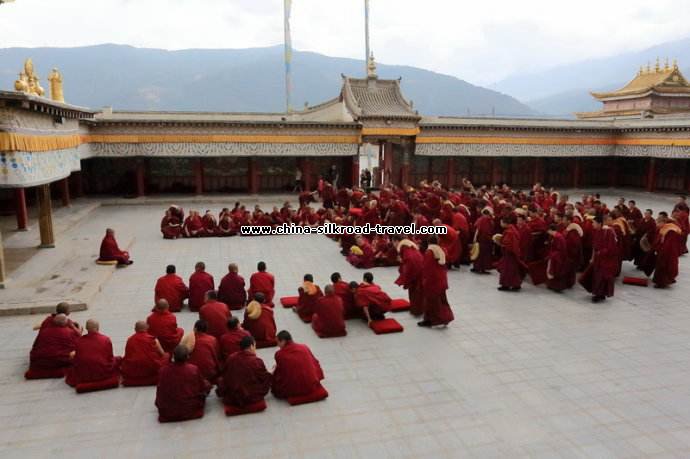 This morning we will start our trip at Longwu Temple, it was first built in 1301. It has a history of 699 years. Longwu Temple faces the east. It has grand architecture scale, stately model, and luxurious decoration. then bus transfer to Kanbula National Park to visit. Kanbula is well-known for the magnificent unique Danxia landform. The landscape is mainly featured by wonderful peaks, precipitous, hills, caves, cliffs and many rock peaks, stone columns and stone walls. It is also a world of natural plants and a paradise of wild animals. In summer, visitors can enjoy the shade and cool breezes and in autumn they can view a sea of red leaves and immerse themselves in the most spectacular landscape. They appreciate not only the fresh and tranquil natural environment, but also the cultural inspiration drawn from the sites of the cultural interest. Afternoon, we will go back to Xining for rest.
Accommodation: In Xining 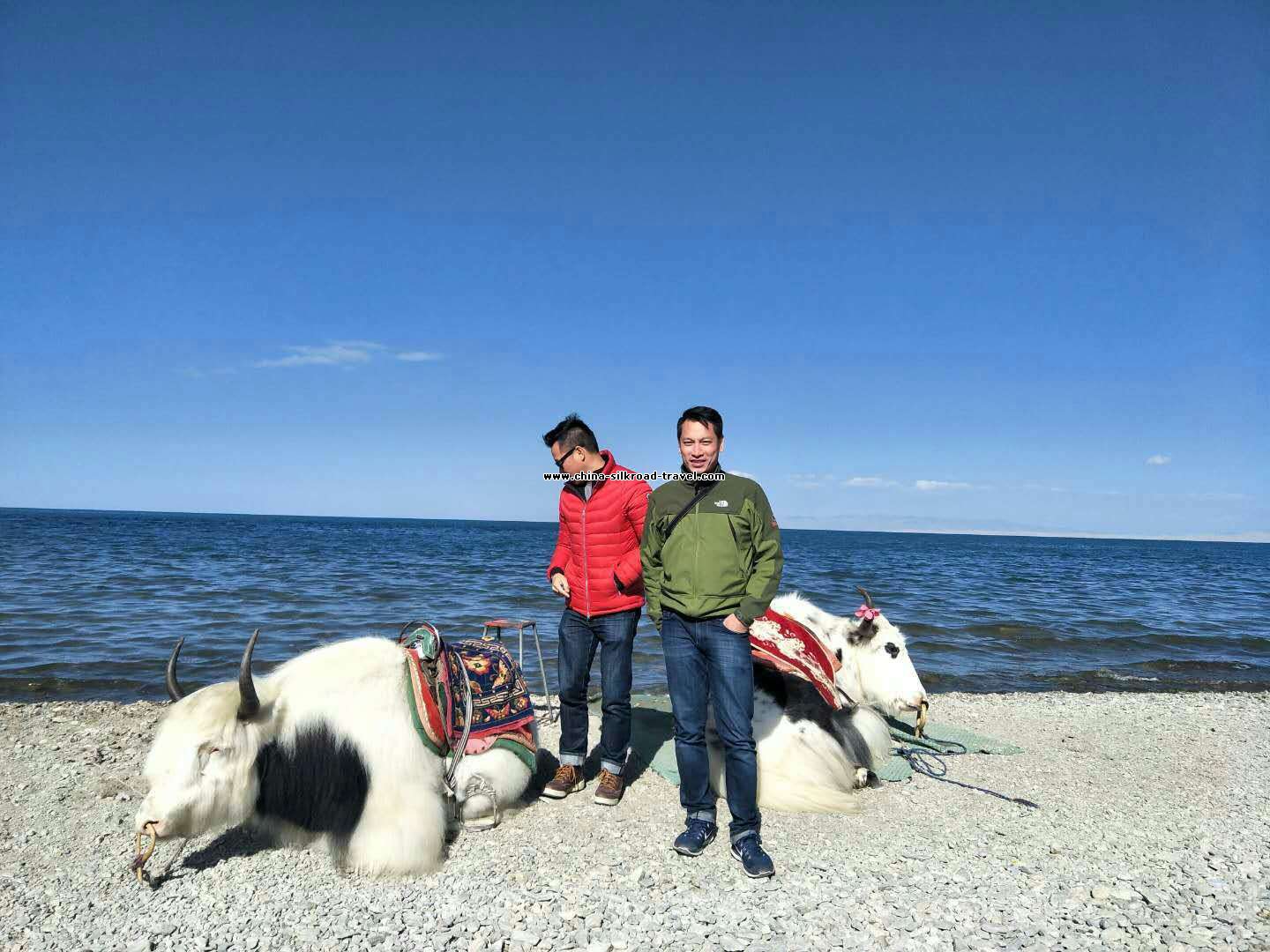 Morning we will visit the Qinghai Lake, As the largest inland saltwater lake in China, the oval-shaped lake covers an area of 4,635 square kilometers and is 3,196 meters above sea level. In ancient times, it was called “Xihai”, “Xianshui” and “Xianhai”. In Tibetan, it is called “Cuowenbo”, meaning “a blue sea”, and it is called “Kukunuoer” in Mongolian also meaning “a blue sea”, so it has its present name, after which Qinghai Province was named. Later we will head to visit the Ta’er Temple, which is the center of Tibetan Buddhism in Northwest China, and enjoys a high reputation in China and Southeast Asia.
Accommodation: In Xining

Today you will be transferred to the airport and take the flight back to your sweet home.