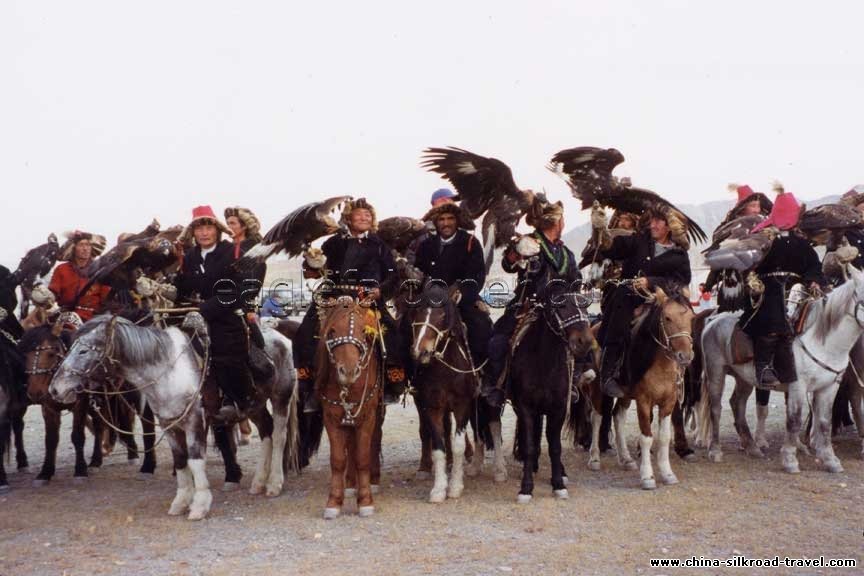 Every year during the first week of October, the “Eagle festival” is celebrated in Bayan Ulgii, in the far west of Mongolia. The aimag of Bayan Ulgii is situated in the breathtaking scenery of the Altai mountain range, where four Asian countries meet. The inhabitants of this area with its rich mix of cultures are mostly ethnic Kazakhs wearing their traditional embroidered clothes.
The “Eagle festival” is a tournament of falconers from the region, who hunt with trained eagles. Once a year, they come together from their home village to measure their skills. There are about 380 falconers organized in an association. They are of all ages, from the teenage boy to the octogenarian, but in keeping with tradition, no girls or women may practice the art.
The training of the future eagle-hunters sets in at a very early age. Boys under ten are initiated to the art and science of falconry by their father or grandfather, usually not starting right out with an eagle, but beginning with a smaller bird of prey. Adult falconers use the golden eagles native to the region. A tamed eagle can live up to 32 years in captivity, but as a rule, the birds are set free again after a few years hunting. A full-grown golden eagle has a wingspan of about two meters, and a weight of between six and twelve pounds. The falconers normally live as nomadic cattle breeders for most of the year and hunt only in winter. Their eagles are trained to catch small game such as hares or foxes, but they are known to kill even small wolves now and again.
In the tournament, the eagle-hunter has to perform three tasks. At first, the mounted falconer must call his bird from the top of a hill to settle on his arm. Then, the eagle has to hunt for hides drawn by a running horse. At last, the bird must catch a live animal typically a fox. The participants are judged not only by their skills in the art of eagle-falconry, but also by the finery of their attire, the glove, harness and bird’s hood made from deer hide, as well as the traditional hunting dress.
After the falconry tournament, the men engage in rider’s games, like plucking a flower from the back of a running horse, or the traditional “buzkoshi”. In this central Asian sport sometimes said to be the origin of polo several riders fight for the possession of a dead goat. Horse races and archery tournaments round off the festival. Although it’s a long way from Ulaanbaatar, the trip is well worth it. There is no other place on earth where you can see so many golden eagles at close range.
Silk Road & Central Asia